In a new weekly column called Beyond the Screen, author A. J. Black unpacks what we’re all discussing from the world of cinema and television. This time, he discusses Fast & Furious 9 and the self-aware transformation of the series behind it…

Delayed by a year thanks to Covid-19, Fast and Furious 9 has emerged as the first significant franchise blockbuster to return to cinema screens as Western nations tentatively adjust to the post-pandemic normal.

This is as it should be. Fast 9, as some are calling it, is a film designed for a big screen experience. It is not high art. It is not going to be pored over by film theorists or students in fifty years time. It is far from likely to be the best blockbuster experience of 2021, given we have a range of other films and franchises—Black Widow, James Bond, Dune etc.—all soon to come. Fast 9, however, is a blockbuster in every sense of the word. It follows a trend laid down by the franchise ever since Fast & Furious in 2009 semi-rebooted the concept and kickstarted a fairly natural evolution from racing melodrama into a modern ‘superhero’ save the world from evil villains saga of good vs evil. Fast 9 is not the culmination of that journey but a continuation of a path the Justin Lin-steered series has been on for over a decade.

Where Fast 9 stands out is in the awareness the film has of its position not just as the ninth film in a franchise—even by today’s standards a rarity—but within the broader cultural tapestry of populist cinema. 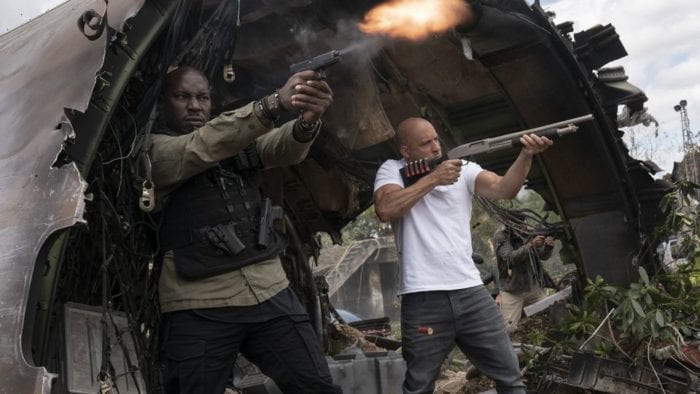 Much has been written over the years about the Fast & Furious franchise’s status as a true cinematic anomaly. The update of a 1950s B-picture, helmed by the unremarkable Rob Cohen and starring a complete unknown in Vin Diesel, right at the turn of the 2000s, The Fast & the Furious should by all rights have stayed a forgotten example of post-90s overhang, in line with a slew of awful high concept, brainless films at the turn of the millennium such as the remake of Gone in Sixty Seconds.

Yet it very early on displayed an elasticity in form and function, only returning to the original cast for the most part four films in and scooping up what would evolve into a reliable ensemble along the way, all the while continuing to make money. Fast & Furious was the turning point. Justin Lin came aboard. The stunts were bigger and bolder. The format began to eschew mere racing. It spoke to broader possibilities.

It ended up reversing the established trend of sequels, certainly before the rise of the cinematic franchise thanks to Marvel, and latterly Star Wars, in developing increasingly cheaper films that often went straight to video (later DVD) or languish on a streaming service. The Fast films grew every single time. The budgets inflated. The ambition heightened. The cast expanded from the central rivalry between Diesel’s rebellious driver & crook Dominic Toretto and Paul Walker’s straight arrow FBI agent Brian O’Connor, into a web of inter-connected characters who faced the kind of sinister and lethal global terrorist organisations that Bond would face or the IMF would smash. Indeed, what became known as the Fast Saga has a parallel, in terms of growth and unexpected expansion, with the Mission Impossible franchise. They might operate in different worlds with alternate styles but they overlap in terms of what drives them—the intensity of their leading men.

Tom Cruise and Vin Diesel both anchor their respective franchises which have, over several decades, remained remarkably steadfast in terms of box office receipts and steadily grew in size, stature and reach. For every Fast film that sees the driving crew take on a nuclear submarine, you will have Cruise hanging off the side of an airplane for Mission Impossible. The intent is expansion, to provide audiences with a thrill bigger and bolder than each preceding movie, and for the most part these two franchises succeed.

The difference with the Fast Saga, a difference made explicit in Fast 9, is that the Diesel-fronted series seems far more surprised it has survived this long and emerged as one of Hollywood’s most bankable franchises. Cruise and Mission Impossible, given the cultural pedigree dating back to the 1960s, somewhat takes such durability for granted. Fast 9 sees characters actively discussing how ridiculous it is, essentially, that they are still on screen.

The avatar for such commentary lies predominantly in Roman Pierce (Tyrese Gibson), who along with Taj (Ludacris) serves as the ‘comic relief’ among the Fast crew. Roman began, in theory, as another attractive straight man lead in 2 Fast 2 Furious—before the franchise stopped taking itself so seriously—but very soon once the core dynamic began to form, from Fast Five onwards, he became an anxiety-driven mouthpiece for both the worst fears of the characters and the existential questions that audiences themselves might ask.

Roman in Fast 9 actively and openly wonders if the characters in the franchise are protected by some kind of cosmic force of luck, an invincibility which explains how they continue to survive, against the odds, the increasingly hard to believe missions and stunts the series indulges. Roman speaks to the idea that Dom and the characters around him have become modern superheroes, simply without magical or cosmic powers.

This is also where the Fast Saga differs from Mission Impossible, because that franchise never really achieves such a meta-level of textual analysis. Occasionally, characters might glance toward Ethan Hunt’s uncanny resilience, intensity and ability to overcome the greatest odds, but we as an audience understand Ethan not as a superhero, but more the result of Tom Cruise’s dedication to pushing the envelope of action cinema. The Fast Saga might have beaten Cruise to the punch in taking several characters into orbit, but Cruise intends to be the first Hollywood to star to actually shoot a movie in space.

The Fast Saga at this stage is presenting Vin Diesel and those around him as super-heroic human beings who, if Roman’s theory is to be believed, are surviving thanks to the hand of fate. They are capable of feats, primarily with technology, that are beyond what normal people would be capable of. They have transformed into saviours of the world, deployed by shady government agents to take down extremists and cyber-terrorists, without any training or background in espionage or global security. Dom and his crew exist in a hyper-real space.

What we are seeing the saga transform into, as it moves closer toward the intended conclusion in Fast 11, is one that recognises its position as a knowing piece of blockbuster and superhero mythology. Dom is no longer simply a reformed crook turned lethal American weapon, he is a tragic hero with a Shakespearean family tragedy underpinning his hero’s journey. Fast 9 layers in flashbacks showing the death of his race car driving father, the descent of his younger brother Jacob into darkness and super-villainy, and Dom’s own internal reckoning with fatherhood.

Both the secrets and sins of his own father and his position as a father himself come to the fore, with the grown up Jacob—played by John Cena, who much like Dwayne ‘The Rock’ Johnson enters the franchise loaded with audience preconceptions about him as a personality—serving as Dom’s dark reflection. This all tracks much more acutely with comic book mythology than it does mere blockbuster action cinema, and positions Dom and his crew as potentially tragic heroes caught in an existential battle to save their family from an assortment of larger than life antagonists. 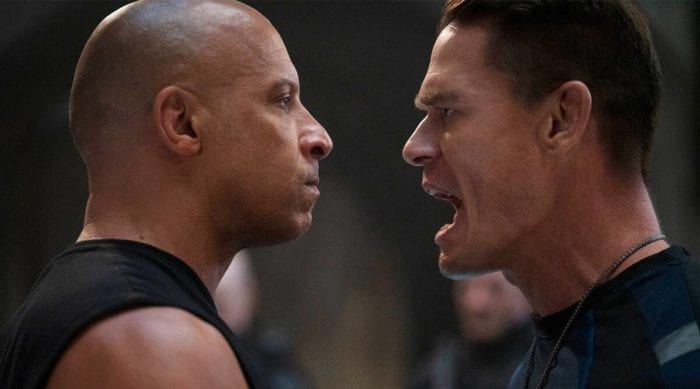 It’s also interesting how the villains of the piece—Charlize Theron’s Cypher or the snivelling billionaire rich boy Otto (Thue Ersted Rasmussen)—seek to bring chaos to order with their MacGuffin in Project Ares: technology that would allow them control of global weapon systems, and subsequently transform the world into one of control. We saw similar in Mission Impossible during the last two Christopher McQuarrie entries, extremists such as the Syndicate and ‘John Lark’, who simply want to burn down the status quo and start again.

The last James Bond movie, Spectre, saw the revamped Blofeld undermine global intelligence by seeking ‘information’, gaining control over world networks as a means of covertly steering governments and agencies under his quiet dominance. Extremism in these films is presented in a shadowy network of high-tech criminals and sinister paymasters hiding in plain sight, except in the Fast Saga these people are heightened in the vein of cod-mythic comic book stereotypes.

Fast 9 therefore fully cements the Fast franchise as a series fully aware of the transformation it has undergone, from a car racing series designed to attract teenagers and twenty somethings looking to get their pulses racing, into an example of 21st century blockbuster overreach that takes the heightened examples of action cinema from previous decades—the high concept ’90s efforts such as The Rock or Con Air, and the sublimely ridiculous one man army conceits of the ’80s personified by the films of Schwarzenegger or Stallone—and fuses them with the endurability of the ensemble superhero franchise.

Crucially, it understands its place within such a tapestry and plays up to it. Sending Taj and Roman into space, in a rocket-propelled old car, to destroy a satellite, is the ultimate expression of this. Space was always predicted as the Fast series’ inevitable frontier by fans, and Lin’s film gives it to them, albeit in an unexpected and comic vein, one where Roman openly questions the madness of the whole endeavour. He is us—the audience who laugh at the spectacle and query how impossible everything that happens in this franchise to these people actually is.

Therein, of course, lies the charm, and why even while the Fast Saga lacks the filmmaking skill, acting quality or narrative wit of the films it builds on, it will without question endure as part of populist, escapist cinema’s evolution over the last twenty years. It is as knowingly ridiculous as the world it inhabits.