The following contains spoilers for Evil S2E2, “A Is for Angel”

“A Is for Angel” introduces a wrinkle to the assessments Kristen Bouchard (Katja Herbers), David Acosta (Mike Colter) and Ben Shakir (Aasif Mandvi) have faced thus far in Evil: a man named Raymond who seems to be possessed by an angel. Raymond’s wife Ashley is two months away from giving birth and very troubled by Raymond’s insistence that the Archangel Michael has instructed him to give all of their money and possessions away. He has also taken to covering the walls of his house in charcoal drawings of Michael. When pressed by David, Raymond mentions “the second bowl”…and then leans in close to David and whispers, “Help me…he’s coming for me.”

Our heroes eventually determine that Raymond is probably suffering from high toxicity levels from a scopolamine patch, which crane operators like Raymond use to combat vertigo. If left on for too long, scopolamine toxicity can cause memory loss and hallucinations. Bingo! Unfortunately, what scopolamine does not do is cause a human body to become superhuman and fire retardant—which is what happens to Raymond when he pulls over to rescue a family from a burning car by lifting up enough for them to drag three of them out. And yet, he remains holding the car and letting the fourth occupant burn for a solid minute before saving him. Raymond is essentially unscathed, and the man he let burn had been abusing his niece and, while having survived, is burned beyond the point of being able to assault her ever again.

Later, David is discussing with Kristen and David the Saint Augustine principle of “Just War,” in which the choice of peace over violence could be considered a sin, were the act of violence preventative of a graver sin. Kristen latches onto this idea, no doubt trying to justify her murder of Leroux. Ben counters David’s assertion that Raymond potentially acted justly in what he did, stating that it was just Raymond’s word that the man was abusive. It’s also made clear throughout this episode that Ben is all but convinced that Kristen killed LeRoux, and Kristen herself is clearly slipping further down her dark path.

Scopolamine also doesn’t explain why David himself is visited by Michael and given a glimpse into the Second Bowl. The Second Bowl is referenced in the Bible in Revelation 16:3 (NIV): “The second angel poured out his bowl on the sea, and it turned into the blood like that of a dead person, and every living thing in the sea died.” Michael discusses with David an apocalypse—”God’s penance, a weapon more powerful than 10,000 swords”—that would leave half of the world dead, for the purpose of rebirth from devastation. And what does David see on his computer but a news report on a potential “next plague” originating from Wuhan.

The Archangel Michael is far and away the most horrifying supernatural being yet introduced in Evil. I incorrectly described his design in my S2 trailer analysis as having a zipper-like line down his chest. It turns out that this line is actually the body of a glowing trumpet, gripped by the “fingers” of a ribcage. A post on the show’s subreddit points out that Michael’s design is evocative of Zdzistaw Bekinski’s “The Trumpeter.” It’s interesting that Michael’s design is so intricate and detailed, and moreso that he is an angel. It seems to suggest a blurring of the lines between good and evil and right and wrong, especially how Michael draws his sword and furiously reprimands David for questioning God.

It’s also worth noting that there a more than a couple of references to angels being vindictive on God’s behalf, most notably Sodom, in which God’s angels laid waste to the town to punish their overwhelmingly sinful behavior. Lot’s wife, instructed not to turn back and look at the destruction of the city, did so anyway and was turned into a pillar of salt for refusing to listen to God. Abraham had pleaded repeatedly with God to spare Sodom were he to find just ten righteous people. He failed, and whoever had been righteous within the city perished with the rest of them. Similarly, the apocalypse-level event described by Michael would find some of the righteous on the receiving end of God’s wrath.

The “resolution” to this week’s case is a prime example of episodes when good does not triumph. While our heroes concluded that Raymond is probably suffering from a psychotic break, even with gaps in the story, a welfare check-up finds Raymond sitting alone in a room bereft of furniture. When David frantically asks where Ashley is, Raymond says “she turned back,” and points at a large pile of light-colored particles on the floor—a collapsed “pillar of salt.”

There is more to discuss on the matter of Leland, namely that Sheryl might be keenly aware of his apparent true nature. When Leland is about to take a phone call while at the wedding planner’s office, he makes a snide remark at the (admittedly smarmy) wedding planner, and Sheryl playfully calls him a “beast.” We saw in Season 1, during a sexual encounter between Leland and Sheryl, flames suddenly engulfing their bed and no significant response from either person. Secondly, a short time after he cruelly dumps Sheryl, Leland finds that Kristen had located a secret compartment during their assessment of his apartment, and, mistakenly thinking that Sheryl had spilled the beans, angrily confronts her with some very choice words. Sheryl counters with a couple of hard slaps to Leland’s face, some choice threats of her own, and this line: “Do you know how many demons I dated before you?” It’s Leland’s look of surprise and confusion that makes me wonder how much Sheryl knows, and what exactly her own secrets involve. 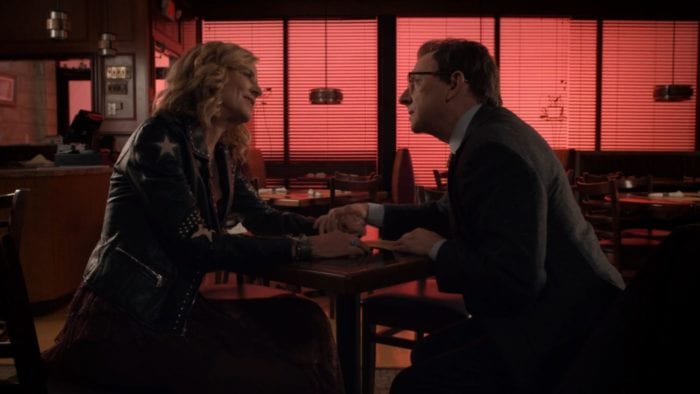 On top of all this, we have a brief moment in which Ben, still spying on Leland through his camera, discovers via screen share that Leland is typing something out in some sort of mysterious font, and it ain’t Wingdings. This seems to confirm that last week’s closing shot of Leland laughing into his webcam, seemingly aware of Ben’s surveillance, was another Ben night terror given how deeply under his skin Leland was able to get.

Finally, we have the cryptic and eccentric Sister Andrea—who mops around David’s unconscious body while cleaning his room, says stuff like “pain is for tourists” when referring to hurting oneself to get closer to God, and, very importantly, is visibly deflated and fearful when she sees Leland when he arrives for a confession with David. “You smell,” she whispers, and begins reciting the Hail Mary. Leland responds with a snarl. Sister Andrea has appeared a couple of times through the episode and has been established as being relatively impervious to fear, but she felt it from across the room from Leland. And when she see’s David’s supernatural drawings, having made herself at home in his room, she pledges to help him. Sister Andrea knows something, and she knows a lot of it.

During the confession, the chess game between Leland and David severely escalates. Leland very apparently admits to David that he convinced David’s terminally ill wife to take her own life, presumably forcing David to forgive him. Yet, after a conversation so intense that David’s palm is bloodied with the force with which he gripped his rosary, he assigns five Hail Marys and two Our Fathers for Leland’s penance, without incident between the men. Leland is taken aback at the simplicity of this, asking whether he is forgiven. “Yes…God forgives you,” replies David—the emphasis being that David most certainly does not. Leland is left flabbergasted, clearly upset he didn’t get a rise out of David (which would have further jeopardized his path to priesthood, as is Leland’s objective). 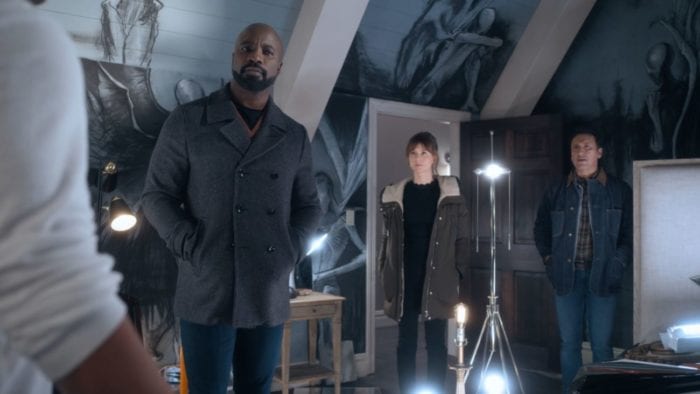 I got into an argument with a megachurch pastor on Facebook several years ago about the Darren Aronofsky film Noah. The pastor was incensed by the film and how it depicted Noah as a man who was deeply troubled and even at one point possessed murderous tendencies because of his struggles in deciphering the will of God. This pastor refused to accept that Noah could be anything less than morally infallible. Aronofsky’s interpretation, I argued, was more interesting, satisfying, and realistic.

The same holds true for David in Evil. David is a priest in training, has loved and lost deeply, has struggled with drug addiction, and yet still holds onto his faith. He is a deeply flawed man and his path to priesthood is fraught with doubt and sin. That’s the sort of spiritual journey that makes for such richly compelling character development; so far, I’ve no reason to doubt that David will abandon his path, but that path is littered with pitfalls and challenges to David’s faith that highlight his flawed humanity. God still hasn’t spoken to David any time recently, but instead David has experienced visitations from angelic and demonic figures, and he is plagued by horrible doubt.

These weekly write-ups on Evil are a labor of love; there’s so much to unpack, so many strands to pick at, and several things that I have to sadly set aside for lack of ability to coherently tie them into the overall piece. But at the same time, the 2+ times that I watch the episodes reveal new things to look at, new reasons to revisit old episodes, and the sort of intrigue that only rarely reaches this heights. I absolutely love picking this thing apart, and I hope you also enjoy taking this journey with me.