Initially, I had In Bruges in mind as an interesting example of a movie that works despite none of the central characters having a character arc. Regarding the full sweep of the narrative, neither Ray (a career-best Colin Farrell) nor Ken (Brendan Gleeson, also at his finest) dramatically changes over the course of the film, with the character’s evolutions principally constructed around revelation. We learn incrementally more about them as the film goes on.

However, in the final moments of the film, I realised this was incorrect, and I had been looking at the film wrong. Ever since my first viewing of In Bruges (and there have been several since), I thought that in Ray’s final dying monologue (and it is a dying monologue) the mother he was referring to, and resolved to deliver his apology to, was Harry’s wife (Elizabeth Berrington), whom we glimpsed earlier in the film.

Of course, it must seem obvious to anyone else that he was referring to the mother of the little boy he inadvertently killed with a stray bullet, as revealed in flashback earlier in the film. It’s this guilt that Ray has been carrying with him from the beginning. However, as the monologue was initiated by Harry’s (Ralph Fiennes) suicide, and we had seen Harry with his wife and children earlier in the film (while the murdered boy’s mother never appears), my mind just assigned this mother as one of the only two mother characters who actually appear in the film: Harry’s wife and Marie (Thelka Reuten). This is perhaps illustrative of the unintended power of cinema’s visual language. Viewers are perhaps automatically going to think first of a character they have seen and who is directly tied to recent events, before an unseen character who contextually makes far more sense. Nonetheless, this somewhat embarrassingly belated revelation inspired me to take another look at this film, and at Ray’s final monologue in particular.

All films, or art in general, exist as a means to illustrate a point, typically a moral message, and to do so in as entertaining or creative a way as possible, so as to couch the moral in more poetic and subtle terms. At its core, In Bruges is a film about facing the consequences of one’s actions, and whether anyone has the capacity to truly change. The reason I believe that I had missed Ray’s particular character arc is that it only climaxes within that final voiceover, with just seconds before the film, and his life, ends.

Films have plots, and they have stories. Ideally, the plot and the story should be linked inextricably and reach their respective junctures concurrently, but this isn’t always the case. To make some comparisons with a couple of classic examples, let’s take The Return of the King and The Last Crusade. Both of these movies revolve around characters seeking or guarding precious objects, objects that are lost at the end of the film, during scenes where the films’ respective leads hang precipitously off ledges, their loyal companions trying to pull them back to safety while the sought object falls into oblivion. In The Last Crusade, Indiana Jones is reaching for the Holy Grail, but his father counsels him to let it go, allowing him to save him. The plot of the film is the search for the grail, and the story is learning not to let ambition and lust for power be your downfall. Both climax in the same instant when Indie leaves the Grail behind.

In Return of the King, however, the destruction of the ring and resolution of the plot occurs many minutes before the resolution of Frodo’s character arc, which is the actual story. That happens when Frodo, having returned to the Shire, realises it will never be his home again and leaves Sam behind to go into the west. That’s why the infamously protracted ending of The Return of the King exists and why it frustrates so many viewers. The plot is over, and the audience are wondering why the film is still going, but the story still hasn’t finished yet.

The plot is a vector for the protagonist’s story, but not always a perfect one. That’s why the characters of In Bruges, at a glance, have no character arcs. The plot climax, in the sense of the film’s peak of tension and action, doesn’t really contain any big learning moments for any of the characters. If any character arc has a climax during the plot’s climax, it’s Harry’s, when he realises he has killed what he believes is a child, and true to his word, kills himself on the spot. That, even more than Fiennes’ fantastic performance and colourful dialogue, is what makes Harry Waters such a perfect antagonist. Throughout the movie, Ray is running away from what he has done: behaving like a child himself, betraying and hurting the people around him, and not facing up to the consequences of his actions. This is a stark contrast to Harry, who believes ‘you can’t kill a kid and expect to get away with it’ and that people should atone for their sins in the here and now.

On the other hand, you have Ken, who is naturally forgiving and aids Ray in escaping his actions. Ken has made many mistakes in the past himself, and although he is broadly at peace with himself, being asked to kill Ray triggers him to re-evaluate what kind of person he is. When he counsels Ray that it’s not too late for him and he can still change, Ray might be unconvinced, but Ken isn’t. He realises who he is and that there are some lines he will not cross, and he instead devotes himself to saving the life that has been placed in his hands. Ken embodies the notion that you can become a better person and rise above your greatest mistakes. 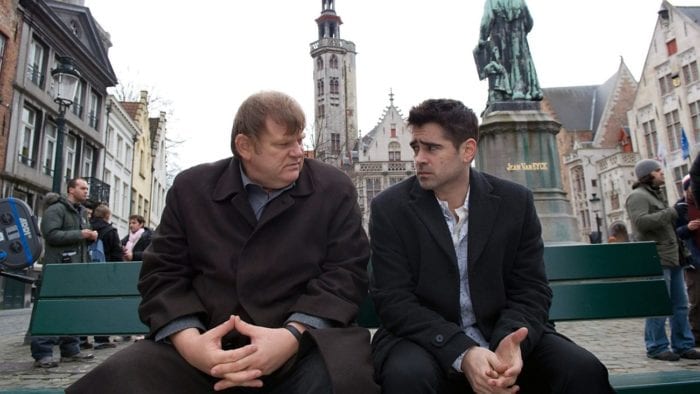 In the flashback, after Ray has killed the child and is kneeling in shock, Ken comes to his side and pulls him away. Later, he puts Ray on the train out of Bruges and puts himself in harm’s way to protect him, that is until Ray is brought back to Bruges after being arrested for assaulting a Canadian couple earlier in the film. Therefore, this seemingly throwaway moment of comic irony paying off on an earlier setup—that such a minor character ends up derailing Ray’s life or death escape—actually ties directly into the central theme of the movie: Ray’s actions, even the ones the audience forgets about, will always have consequences. The fact Ray is unable to leave Bruges encourages the audience to read Bruges as a kind of personal purgatory for Ray.

Ray’s other mortal sin is that of suicide. He swings between ignoring and denying his actions, sinking into suicidal levels of guilt as he is consumed by a desire to be punished. Ken talks him out of suicide, arguing a middle path where he continues to live and try in some way to make amends. However, it is Ken himself who ultimately does commit suicide as a last-ditch effort to save Ray’s life. Perhaps this final redemptive act allows Ken to escape the purgatory that is Bruges; I would certainly argue that Ray does. In the film’s final moments, his monologue expresses his own feeling that Bruges is his own purgatory, and expresses two sentiments: a willingness to accept his punishment for causing the death of an innocent, and a desire to live. He thus atones for his two mortal sins: murder, and having despaired of his life.

If you haven’t seen In Bruges since it came out, I’d recommend giving it another watch. It holds up surprisingly well today. Rewatching it now, perhaps the thing that most strikes a modern audience is how wildly politically incorrect much of the dialogue is. It seems poised for the kind of backlash that met director Martin McDonagh’s later film Three Billboards Outside Ebbing, Missouri. Ray’s usage of slurs throughout the film is used to characterise him and reveal his immaturity: he uses bad words the way little kids do. I can’t think of an example where we are encouraged to laugh with Ray: his ignorance is the joke. When Ray first sees Jimmy (Jordan Prentice) he excitedly says, “They’re filming midgets!”, but when Chloe (Clemence Poesy) tells him Jimmy prefers the term ‘dwarf’, Ray duly switches for the rest of the film. Minor details like this help to characterise Ray: he’s immature and still learning, which allows us to share Ken’s belief that there is hope for him yet. 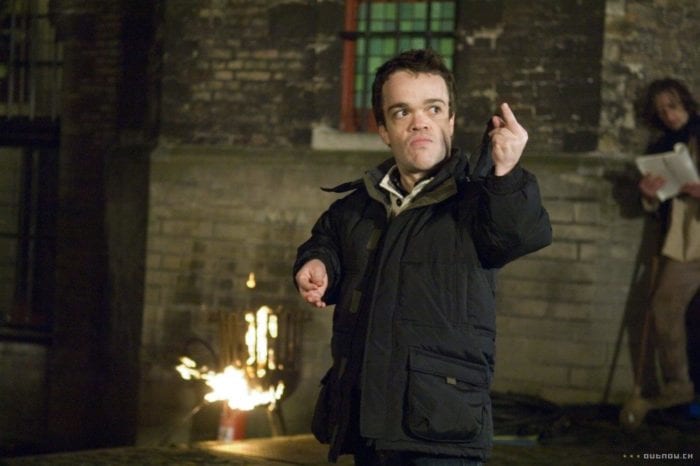 Likewise with the character of Jimmy: his introduction is contextualised by his exasperation at the patronising way he is treated by his director. As we see more of him, we learn he is not only a dissolute hedonist but somewhat racist as well. This aspect of his personality only comes out when he’s high, and he later apologises for it and acknowledges it as unacceptable. This again feeds into the film’s themes of personal growth. The character serves to tear down the presumption of the childlike innocence we see his director imposing on him. By the time the movie he is working on dresses him as a schoolboy, it feels laughable not because of his stature, but because it contrasts so ironically with what we now know about the character.

If one is able to reconcile finding something lovable about the movie’s rogues gallery, then In Bruges still stands as one of the best black comedies ever, managing to be extremely full and charming while never coming across as irreverent and still delivering some moments of real pathos and gravity. Everything from the brilliant script and direction by McDonaugh (the film is so rich with details it could be used as a case study in planting and payoffs) to the phenomenal performances by the whole cast and its fantastic Carter Burwell soundtrack perfectly capture the film’s intense, wistful melancholy.