Welcome to a new column dedicated to the appreciation of physical media supplements called: Feature Presentations. The goal of this column is not to say whether a film is good or bad and worth picking up or not—I would like to highlight the discs that go the extra mile and provide film fans with enough tasty tidbits to satisfy even the hungriest of cinephiles. With all that out of the way, today’s article will focus on The Grifters Collector’s Series DVD from 2002.

I’ve been around long enough to recall when DVD first exploded onto the market in the late 1990s and early 2000s. For film buffs like myself, the idea of what DVD meant was new and exciting. Gone were the days of having to rewind to a certain point or the auto-tracker on the VCR freaking out. Just pop the disc in, use the menu and access any point in the film you desire. I understand that this technology first gained traction through Laserdisc but never caught on to how DVD did. One aspect from the days of Laserdisc that did transfer over what the addition of bonus material.

I have mentioned in the past that I love a stacked disc; overflowing with bonus features. It gives me an additional reason to purchase a film I know or even purchase a disc that flew under my radar. You might be wondering if I would skip over a disc because there’s a lack of features. I would never do that. If I enjoy the movie, I will end up adding it to my collection. It’s that extra mile that I crave, and if a production company sends out a bare-bones release, there is a disappointment because every film has a story to tell. 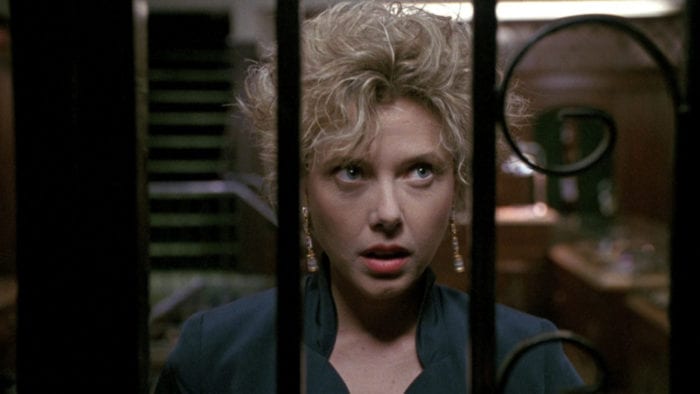 Each movie is unique, and the players in front and behind the camera are integral to telling the story behind that particular production. I do not have any discernable order to which films I will be writing about or choosing—some may be new 4K releases, some from the golden era of DVD. The Grifters falls into my classification of a ‘golden era’ DVD.

The Grifters is one of those movies that should be more well-known than it is. From director Stephen Frears, actors Angelica Huston, John Cusack, and Annette Benning and produced by Martin Scorsese, The Grifters oozes talent. The film took that talent to the Academy Awards, nominated four times, including for Best Director and Best Actress. So, why is it not as recognized as other films? It could be the dark tone or unlikeable characters. The Grifters is a hard-edged noir and makes no apologies for it.

I’ll be honest about The Grifters, I hadn’t seen it before my purchase, and my first viewing experience wasn’t a good one. It wasn’t the film I was expecting, and it rubbed me the wrong way. I based the purchase on the acting talent and the idea of a noir about con artists. It fit right up my alley. Needless to say, once I finished, I put the disc back on my shelf, where it sat for years. After some time had passed, I gave it a second look and enjoyed it more—still not loving it. Suffice to say: it has taken me a handful of times to come around and enjoy this masterpiece. Maybe The Grifters is typical of a fine wine and needs time to go down smooth? It’s been over 30 years, though I think it may be one of those films that have fallen through the cracks.

Thankfully, the physical media release wasn’t neglected and came stacked with a host of extras.

Back before boutique labels took care of cinephiles, certain home video lines catered to film fans. There was 20th Century Fox’s 5 Star Collection, New Line’s Platinum Series, and Miramax’s Collector’s Series. You knew if you picked up one of these discs, the supplements would fill your quotient. Miramax distributed The Grifters and provided fans of the film with plenty to enjoy.

First off, two different sets of photo stills are available. Broken up between production and publicity stills, you get plenty of photos to look over and enjoy. The first documentary on the disc is titled “The Jim Thompson Story,” a brief featurette about the author of The Grifters novel. The Grifters screenwriter Donald Westlake and author Robert Polito discuss the life and influences of Jim Thompson. For anyone unfamiliar with the author, this is a good jumping-off point. If you are looking for substance, you are best to look elsewhere.

“The Making of The Grifters” features Frears, Westlake, Huston, Cusack, and production designer Dennis Gasner discussing the film from pre-production through release. Unlike making-of documentaries nowadays, “The Making of The Grifters” is short and to the point. As this is not a feature-length making-of, the details provided only scratch the surface. We are privy to nuggets including Sissy Spacek reading for the part that Huston played, Frears’ directing style, and how the color red becomes more significant as the film nears its conclusion. It’s not as thorough as one would hope, but it does the job, and I applaud the production team for its inclusion on the disc.

The last bonus feature on this package comes in the form of an audio commentary. It’s not as big a deal as it was in 2002, but getting Stephen Frears, Donald Westlake, John Cusack, and Angelica Huston to sit down and talk about The Grifters is quite a treat. Hell, even as I’m writing this now, I feel this is a track that all cinephiles should hear. Each participant is seamlessly inserted into it to create a cohesive and entertaining commentary. It is not every day that you hear as much talent discussing their work as you get with the commentary track on The Grifters.

Noticeably absent from all the bonus features is Annette Bening. It’s not a given that all actors from a film will participate in the supplemental material, but if there is a flaw, her absence would be it. Through the commentary and behind the scenes interviews, Frears and the entire crew never said one bad word about her and by all accounts, her presence was welcome on set.

There you have it. As I have mentioned in the past, I am not overly concerned with A/V quality as I am the supplements. I will never have the best equipment to do justice to some reviews, so I will stick with what I know: enjoying the bonus features.

For a release that is around 20 years old, Miramax (boo, hiss!) did The Grifters justice by giving fans of the film everything one could want—behind the scenes, a commentary, and a history lesson. If you don’t own The Grifters disc yet or haven’t seen the film at all, this release gives you everything you could want.