Each month, dozens of new films are added to the Criterion Channel. While the rich selection of feature-length classic and independent films obviously gets a lot of well-deserved attention, I wanted to shine a little light on some of the short films. I believe that shorts should get a lot more attention than they typically do—they are breeding grounds of experimentation and non-traditional storytelling, and often are important outlets for marginalized voices.

Like June, July’s slate is pretty thin, with only a smattering of newly added short films. There were only about a half-dozen newly added films under 40 minutes this month (come on Criterion, I’m trying to write a column here!), but as always, there is plenty to talk about in the films themselves. The slate was dominated by films that were part of the 2012 London Cultural Olympiad, so there was a particularly British flair to the additions. Also featured this month are films by Iyabo Kwayana and playwright Samuel Beckett with director Alan Schneider.

While this article is exclusively focusing on short films that are on Criterion Channel, I’m also keeping track of all of the short films I watch in monthly Letterboxd lists, whether on Criterion Channel or elsewhere. I’ve listed the streaming service that I watched them on, with the films that I talk about in this article marked in the notes with two asterisks. Feel free to follow me and the lists on Letterboxd and feel free to reach out to me on Twitter if you want to discuss any of the short films. Without further ado, let’s get into the films!

Practice documents exactly what its title implies: a group of martial artists practicing Shaolin. The film starts with an epigraph by 19th-century religious leader Baháʼu’lláh: “Dost thou reckon thyself only a puny form when within thee the universe is folded?” The short film takes the epigraph and expands on it in its own interesting ways.

The film seems to change as it progresses. The first few minutes of the short are a fairly straight-forward presentation of the practice. Although the individuals are somewhat lost among the multitudes of people, the camera is close enough to distinguish individuals and their features. At the very least, the short film is more grounded during these opening moments than it is later. As the film progresses, however, there is a shift towards abstraction. As a quartet of martial artists finish their forms, the other artists—several hundred strong—rush in while shouting. The camera zooms in on the red rush of indistinguishable people as they rush by like water. The scope of the shot then shifts again, this time to a mesmerizing aerial shot of the group forming a mandala-like series of circles. The individuals disappear completely in this sequence, which emphasizes that the individuals have the universe folded within them, but they are also an equal part of the universe as well.

The Odyssey presents a complicated and thought-provoking portrait of, and ultimately love letter to, London. The short looks at London in the leadup to the 2012 Olympic games, and is one of several short films that were commissioned for the Cultural Olympiad that were added to Criterion Channel this month. The tone is set almost immediately by juxtaposing the announcement of the games with the 2005 London bombings—major events that, incredibly, occurred in consecutive days (July 6, 2005 and July 7, respectively). The short continues to trace gentrification, strife resulting from police violence, and the impact of the 2008 financial crisis through aerial shots of a constantly evolving London.

Among other things, the short points out that some of the aims of the Olympics were contradictory; for example, the organizers stated that they wanted to inspire young people to play sports but shut down recreation centers where people could participate in sports to build the Olympic facilities. But then, London can be contradictory in itself. As the short says, even though a lot of things changed over the years between the announcement of the London Olympics and the event, “It’s still London. It probably is still the greatest city in the world.” 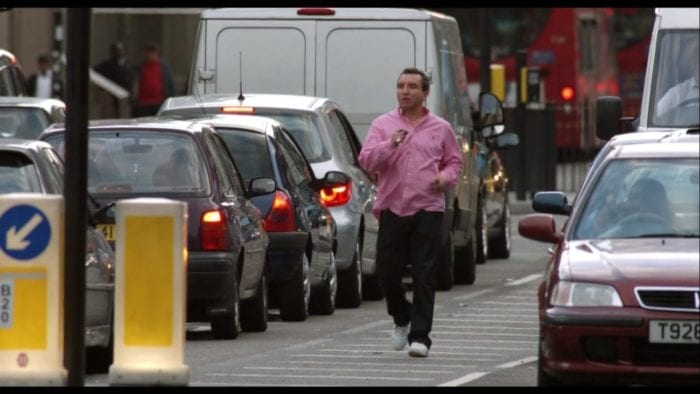 I admittedly haven’t watched much Mike Leigh yet, but when I was younger I watched a ton of episodes of the British sitcom Keeping Up Appearances. A Running Jump unfolds like Keeping Up Appearances on speed. There’s a quote attributed to Johnny Ramone, where he says that their songs are “not too short, we just play ’em real fast.” A Running Jump is a short film like “I Want to Be Sedated” is a short song: it’s a feature film played fast.

The film primarily focuses on a car deal that the patriarch of a middle-class family living in London is trying to pull off, and the numerous hijinks that occur along the way. Its breakneck speed is established before the first image of the film through the musical score, which plays nearly constantly through the short film. At the heart of the musical theme is a frenetic Reichian piano riff that playfully loops underneath conga drums, trumpets, and a bass guitar. The pace continues when we’re introduced to Perry, an independent used car salesman, power walking down the street. Perry is walking with incredible purpose and direction, and will do so throughout the film, even though he doesn’t necessarily have anywhere in particular to go and will change directions at the drop of a hat. He also speaks at a mile a minute, which is most evident as he speaks circles around Gary, the target of Perry’s swindling car deal.

Although he is easily the most prominent and over the top member of the family, the other members are also always constantly hustling from one place to another, rarely spending more than a moment in the same room with each other. The odd relatability of the family, along with the fast-paced antics, make A Running Jump one of my favorite short films on Criterion Channel of the month.

Our last film for this month keeps with the London Cultural Olympiad theme. What If tells the story of a boy who lives in London named Joe. Joe lives in fear of a few bullies that live nearby him. He isn’t sure of how to handle his interactions with them, causing him to lash out at his friends and neighbors. At one point, it looks like he is going to perpetuate the bullying cycle by turning on another boy with the same tactics that have been used against him. However, an intervention with a man who magically transports Joe across the city while reciting Rudyard Kipling’s poem “If—” begins to change Joe’s perspective on his life and those around him.

I found a lot of similarities between What If and one of my all-time favorite films, Wim Wenders’ Wings of Desire. The man that is transporting Joe around the city is credited as “The Angel,” and angels that secretly watch and guide humans are the protagonists of Wenders’ film. Both films are also in black and white with touches of color that represent the shift between living in a cold, emotionless world and seeing the small pleasures and joys in it. Throw in the very poetic language found in both movies—which in the case of What If is a literal poem—and the parallels are very striking. But I also found the film beautiful in its own right, and that was enough to land it on my list for this month!

This is just a taste of the newly added short films on Criterion Channel in July! What were some of your favorites? Was there a filmmaker whose filmography you’re excited to dive deeper into? I know that I have Curtis Harrington’s feature film Night Tide on my watchlist. Let me know in the comments or reach out to me on Twitter, and I’ll be back next month to look at some more Criterion Channel short films!