In a new weekly column called Beyond the Screen, author A. J. Black unpacks what we’re all discussing from the world of cinema and television. This time, he discusses the socio-political horror at the heart of The Forever Purge‘s America…

Two of our protagonists in The Forever Purge, who we witness at the outset of the film illegally cross from Mexico into the United States, seek the vaunted ‘American Dream’. What they find are the beginnings of America’s eternal nightmare.

The great durability of The Purge franchise, singularly devised by James DeMonaco, flanked by modern horror purveyors Blumhouse and several directors, lies in how it has combined standard horror tropes—gore, inventive murders, psychopaths, jump scares etc.—with the broader socio-political trappings of the current moment. DeMonaco never expected the freedom to make more than the first The Purge, which wrapped the deeper political commentary around what was first and foremost a home invasion picture, but very quickly the franchise took on a life of its own. It expanded. It deepened the underlying mythology of the series. And it very quickly transformed into, almost exclusively, an anthology series set in different locations film to film, and exploring alternate facets to the idea of the Purge.

In doing this, in holding the concept up to the light and figuring out a range of approaches, DeMonaco managed to make a series—five strong, with a two-season TV series in continuity to boot—which approaches the same idea from a number of angles, namely this: what if America, once a year for 12 hours, could be set truly and ultimately free? In the so-called Land of the Free, that translates naturally to chaos, anarchy and death. A nation built on genocide and cultural appropriation tears itself apart in an existential quest to ‘purify’ the soul, with a trade off that in the other 364 days of a year, America is largely free of crime and exists, theoretically, as a utopian ideal of what the Dream can achieve. Peace, prosperity, and personal freedom.

In DeMonaco’s America, however, the Dream has always been a fantasy, one the Purge franchise frequently exposes as the fallacy it is.

The Forever Purge takes DeMonaco’s concept to a logical conclusion for what was intended to be the final entry in the franchise, until recently. After films which explored the Purge in a city scape (Anarchy), as the tool of conspiracy (Election Year) and even a sinister social, genocidal experiment (The First Purge), Forever revives the Purge—finally cancelled in Election Year with the democratic collapse of the New Founding Fathers cabal of rulers in power—and asks a simple question: what if the Purgers decided not to stop after 12 hours, once the sirens sounded, and once those with no hate or fear to ‘purge’ emerged from the safety of their locked down homes? What if they embarked on an #EverAfterPurge, fuelled by social media, with a collective desire to retake America and ‘purify’ the soul of the nation?

While it is fair to say Forever was no doubt filmed, and certainly written, before the mob attack on Capitol Hill in advance of Joe Biden’s inauguration in January, DeMonaco’s script—and Everardo Gout’s direction—take on an entirely different context in the wake of those events. It has always been easy to consider the Purge franchise as a grotesque, pulpy extension of primal American sociological fears; of a country filled with an underbelly of psychotic, racist murderers, rapists & torturers who, on that one sanctioned night, bring every aspect of primal human darkness to the fore. I once asked in another piece whether, in the wake of Trumpism, we should fear the concept of the Purge as a genuine possibility for the ultimate capitalist democracy of an America buoyed by rage-filled heartland conservatism, but I didn’t truly believe it.

Yet that same grotesque mockery of democratic leadership this year emboldened thousands of people, via social media, to try and attack the seat of Congress, murder elected representatives and even string up the ‘traitor’, Vice President Mike Pence. Suddenly, the Purge films, for all of their simplicity, no longer seem so fantastical. DeMonaco asked the question himself:

Why would people stop? It’s almost like an infection that they can’t contain. Purge 5 is like a zombie film. It’s this uncontainable force. In a weird way, it’s almost like a faceless entity is running rampant in America.

Infection naturally draws intentional comparisons with Covid-19 but The Forever Purge does not exist in a world of social distancing and fragmentation over masks and vaccines. DeMonaco’s point speaks to the scarier reality of how lawlessness and the very idea of the Purge—to allow the base instincts of humanity a night off the long-developed restriction of law and collective human decency—can spread like a virus when unchecked.

The New Founding Fathers—unseen here but revived and likely to represent the powerful assortment of rich, white power brokers as seen in Election Year—are analogous to Trump and the Republican Party in unleashing a hurricane they might not ever be able to stop, and in Forever gains traction without any sense of figurehead leadership. There is no totem or hypnotic zealot driving the #EverAfter Purgers. There is only a social media driven imperative toward an unformed, collective goal: return America to a ‘purity’ before ‘infection’ by minorities and those who are no longer ‘patriots’ to their cause.

The Forever Purge becomes, therefore, a socially-driven form of anarchic, lawless genocide driven by white supremacists. The film takes place in Texas, perhaps the heartland of heartlands for conservative America, and a state filled with a long-standing racist element hostile to the Mexicans across the border who frequently come to America, legally and illegally, for work. Two of our leads, Adela (Ana de la Reguera) and Juan (Tenoch Huerta), are illegals who end up teaming with Dylan (Josh Lucas), the wealthy son of a liberal rancher who at the outset is precisely the kind of southern American those in cosmopolitan areas might look at with scorn.

Dylan is entitled with a low-lying prejudice against Mexicans and the latent attitude of the descendant of white landowners in pre-Civil War and abolitionist America. Lucas is good casting for this kind of peevish role, as he comes with a set of connotations as a performer which Forever then works to undermine, turning him into an unlikely hero as the reality comes home of how white conservative America has transformed into a supremacist heartland, an America he—and especially his father—does not understand. The Purgers grievances are not just about the ‘foreigners’ he himself wanted to retreat from, but the very Americans like him who followed the constitutional right to liberty, freedom and prosperity all the way to economic success. “You rich can hide behind your steel walls, no more! Powerless, how does that feel?” one Purger rages.

Though the conceit of a middle-class white American and Mexican immigrants teaming up against supremacist psychopaths is trite, and compounded later when they are supported by a rather cliched example of calm, collected and quietly badass Native Americans—in order to make the point that Lucas’ strain of non-genocidal white America still have enough skeletons in their closet—it nonetheless serves the level of social good that has always been apparent in the Purge films. 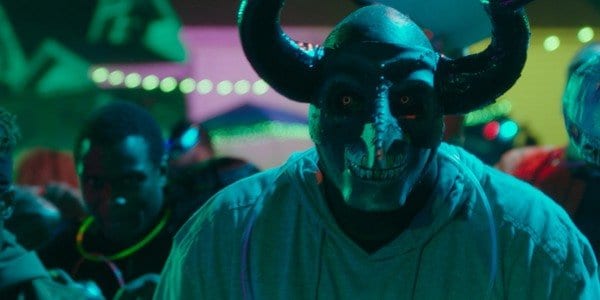 DeMonaco has never sensationalised the violence in these films for the sake of exploitation, and has always been at pains to stress the Purge is a morally bankrupt exercise which speaks to the death of American society and democracy, but for the first time in Forever the franchise actually seems to believe that the Purge is something to fear beyond mere theatrics. It suggests that its expression goes beyond a simple perversion of the American Dream but rather the decay of America into a dystopian Nightmare in which the disenfranchised and socially neglected turn into a destructive, crazed mob capable of besting even the National Guard. It fears once we open Pandora’s Box, it might never close again.

DeMonaco even has toyed with the idea of transforming the concept on a global scale through the TV series:

We were thinking of even going overseas for one of the Purge seasons, with the conceit being that parts of American culture and American society obviously go, so what happens if the Purge starts to spread around the world, the way music does or movies. We wanted to really continue it.

What has changed in this film is the sense of containment. There were rules even within the universe of the Purge. For all of the horror, with heroes and villains within the fabric of these stories, the violence and anarchy ended when decreed as the sirens wailed and dawn broke. Even the mob understood the hate and anger must be put away again at the prescripted time. Forever no longer believes that they believe that. It suggests a world in which once you enfranchise violence and hate and deepen the cultural schism between a society built on tolerance and rule and another built on its opposite, you no longer have the basis of a society at all.

This is not just the absence of the American Dream, which has been in question in cinema and television for decades, perhaps back to the 1970s and the cinema of Alan J. Pakula all the way through to the fragmented, warped ‘nuclear family’ of The Sopranos, but rather the dawn of the Nightmare. A new, Fractured States of America in which liberal and ‘small c’ conservatives (to borrow a British political parlance) must fight for the survival of the country founded 250 years ago, now being torn asunder by a sub-society that has always been there, and now has the collective power to act.

In that sense, the violent uprising within The Forever Purge, in the kind of twisted logic that ultra-conservatives would reject, is a sort of amorphous, distorted Marxism; a collectivised unity of the masses acting together to return power back to the people on, theoretically, unified lines. It is not quite Fascism, as no single power is set to emerge from the chaos bent on totalitarian dominance. It is, simply, a new kind of revolution, and the birth of what could be a Second Civil War. The Forever Purge moves the franchise from B-movie, extreme political horror into as real a dystopian alternate reality for a fragmenting America as Margaret Atwood’s Gilead. It is an America lost by the hopeful and found by the desperate, and it could indeed be forever.

That is why James DeMonaco’s admittance that he has an idea for a sixth Purge film is no surprise and is perhaps fitting. His is a franchise born of American societal decay and could only exist in a world fearing that such decay might not just get worse, but might yet be eternal.