Hoo boy, “Z Is for Zombie” brings the spooky this week. While actual zombies are probably the least plausible possibility of Evil so far, this episode works exceptionally well in how it utilizes sound and cinematography. Evil S2E5 opens with Lila Bouchard and her friend Alex watching a zombie movie together. Lila briefly gets up to go to the bathroom, and as she leaves her bedroom, the camera just holds on the bedroom door. It’s an oddly framed and surprisingly uneasy shot that kicks things off wonderfully. The way the episode is shot, the quietly creepy moments, and the jump scares are all really effective, and the majority of this half of the story is surprisingly nail-biting even once the answers render it relatively toothless. This is another episode in which the opening title sequence ditches the theme music in favor of a much creepier choral arrangement.

Initially, “Z Is for Zombie” didn’t quite hit the mark for me, mostly because it spends half of its time on the kids. That’s not a bad thing in and of itself, but when you have youngsters watching zombie movies late at night, and then suddenly seeing slowly shuffling figures outside their residences, the most immediately likely answer is overactive imaginations. It didn’t help that the girls set off each time for a closer look, armed with kitchen utensils–although I will readily concede that this could have been a dig at how cinematic horror characters tend to act. I think this was more the fact that the subject is zombies, which don’t have an inherently spiritual element, so the ambiguity isn’t as palpable.

The explanation is just a little too on-the-nose: there are zombies, but they’re “zombies” in the sense that they are employees working long hours at an Amaz–excuse me, CongoRun warehouse. CongoRun is a multi-billion dollar commerce company that delivers packages to people all over the world. Their warehouses are infamous for their draconian productivity requirements (exhaustion), lax safety standards (injuries/bleeding), and backbreaking labor (dead-eyed expression). I did, however, really enjoy the bit with the Haitian shop owner concocting two vials of solution for the girls to be given to Alex’s father and her father’s boss, respectively. Those, too, end up being practical solutions to the problem, but framed in the minds of the girls, are magical.

Upon rewatch, I had to remind myself that Evil isn’t just about mind-bending mystery: the character element of “Z Is for Zombie” is strong, especially in how much Lila’s adoration for her mother’s line of work drives her to solve her own mystery. She also consults with Kristen on Alex’s father, and inadvertently challenges Kristen’s own moral journey. We get a couple of extremely quick, blink-and-you’ll-miss-them shots of Kristen murdering LeRoux when Lila asks her about him, specifically about people being “monsters.” Lila was initially consulting mom to contemplate Alex’s dad possibly being a zombie—and whether they can ever come back from that. That’s interesting, considering that LeRoux made an attempt to reconcile with Kristen before his death. Lila’s query seems to hint that LeRoux was actually not acting in bad faith. To boot, this week’s resolution of Alex’s dad being promoted and becoming the “monster”—adopting the same cruel policies he was initially prepared to unionize against—is, like last week, a reality that doesn’t need a supernatural twist to be troubling.

Ben the Magnificent is also showing lingering signs of wear and tear after his terrifying brush with death last week, or, as he tries to minimize it, “trapped in a basement for 24 hours, that’s all.” Kristen and David insist that Ben take some time off, but Ben is having none of it. He’s managing his trauma by throwing himself wholeheartedly into his work, and is even more certain of his conclusions than ever before. This time, he ends up being right: he manages to find that Father Mulvehill, a recovering gambling addict, is seeing gambling pop-up ads not because of any spiritual attack or psychological mania, but because he has indeed been gambling online and his hiding a $40k debt. Kristen has a great line during a conversation with Father Mulvehill, in which she tells him she’s “trying to deal with the reality as you see it.” It reinforces that each of our characters have different beliefs and life experiences, which informs what they perceive as reality. When faced with ambiguity, everyone has a different explanation drawn from their individual walks of life. 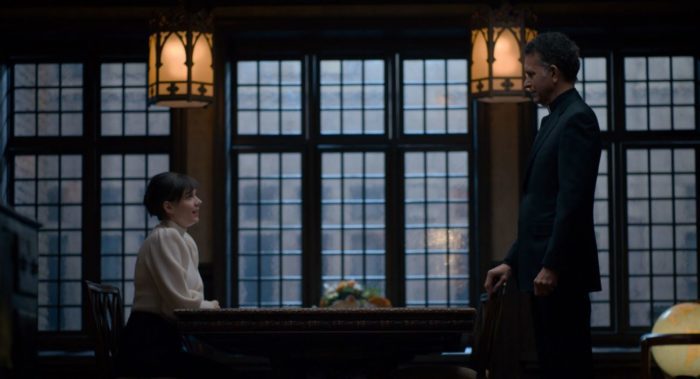 Kristen too finds herself facing targeted advertisements, with these encouraging scandalous rendezvouses. Kristen tells Ben that she hasn’t done anything to cause these ads to show up, but the topic has certainly been on her mind, and she’s visited bars late at night at least once. In the same vein as the overwhelming spectre that is corporate control, how deep does the algorithm dig to deliver targeted advertising? And why the hell is no one using adblock?

Sister Andrea is once again the MVP—Andrea Martin is so, so much fun in this role. She speaks exactly what’s on her mind, coming across kind of like a holier Professor McGonagall, but still cares. And she’s more than a tiny bit wacky, but not to the point where she upends the tone of the scene.

Speaking of wacky, I don’t know what the hell Leland is wearing for his latest exorcism, but he sure does wear it. Michael Emerson also once again gets to enjoy one of the funniest lines of the episode, chortling, “I ordered some 40 pound weights [from CongoRun]. I don’t need any, I just like seeing someone try to deliver ‘em.” He, of course, is still doing his song and dance of faking demon possession. The gloves come off, though, when Sister Andrea steps in for an “overwhelmed” Father Mulvehill, and Leland snarls, “Try me, bitch.”

Oh, no he did not just say that to her. Y’ALL DON’T F*CK WITH SISTER ANDREA.

Long-awaited, very well-deserved comeuppance finally catches up to Leland, and despite it being brief, it is glorious. I kind of wish Evil would have waited until next week to reveal that the Sister swapped out Father Mulvehill’s holy water for ammonia, but seeing her wax poetic about prayer right before showing her pour the chemical back into the jug once David leaves was still a terrific moment.

My biggest current fear is that Leland will find out about the ammonia and retaliate against Sister Andrea.

Even when relatively grounded, Evil is compelling, and this week’s return to a more balanced blend of horror and reality was surprising but welcome, even though I went in expecting more supernatural elements. I watch each week’s entry at least twice, which is why it takes me a couple of days to get these written, but I find myself enjoying and appreciating each more after another pass. I can’t wait to see how these characters continue to evolve next week.