I remember being 16 when I heard Jimmy Eat World’s third full length album, Clarity for the first time and thinking that it was the record I had been searching for my whole life. It spoke to me, not just lyrically, but also the unique sound that seemed to live between these margins, resulting in something unlike anything else out there. It was brave. It was powerful. It was everything that I loved about Emo and more. I played that record nonstop for months to the point of driving my friends crazy, when one day my friend Ben asked me if I had heard any of the band’s other albums and proceeded to put in Static Prevails, their 1996 sophomore effort.

There are some moments in life we don’t forget and that day, that moment when my friend skipped directly to the third track and played “Claire” for me for the first time, was one of those moments. There was more of an angst on Static Prevails than there was on Clarity. It was less polished, louder and had this genuineness about it. It wasn’t the pretty, opus like album that Clarity would be. It felt like a diary set to music. It sounded more like other Emo giants of the time, such as Sunny Day Real Estate, Texas is the Reason, and even American Football at times. To an impressionable 16-year-old who was getting more in touch with his artistic side, it was instantly captivating and eye-opening at the same time. This is what rock music could sound like. Loud, vulnerable & relatable.

Even though all of the guys in Jimmy Eat World are a few years older than me, I felt like I grew up with them. Because they started so young themselves, we as fans got to watch them grow up from record to record, each album representing a different phase of growth in the lives. Phases that so many of us can relate to, because we experience versions of it ourselves. Static Prevails isn’t just angsty, it’s hopelessly romantic at times, the way many of us were in our youth (“Episode IV“), nostalgic for things that were just a few years ago but feel like a lifetime away (“Claire“) and reflective, yet dramatic in all the best ways (“Anderson Mesa“). Listening to this record recently, it felt like a time capsule of my late teens and early 20s.

By no means is this a flawless album though. It’s a really good album that isn’t given the credit it deserves historically speaking, but listening to this record again after not hearing it for years, my biggest takeaway was that it was a stepping stone record for the band. It was a huge step forward from their 1994 self-titled, more pop-punk sounding debut album. As musicians and as a band, there was noticeable momentum and growth. But knowing what was to come—Clarity, Bleed American and Futures (their next three albums after Static Prevails)—there’s definitely a feeling of the best being yet to come for Jimmy Eat World. Style wise, there are moments when you can see the band’s personality and signature sound really starting to come through, and other times when they sound more like a byproduct of that era, which isn’t a bad thing at all. Static Prevails is a really fascinating period of time for Jimmy Eat World growth wise, especially listening in hindsight.

The most striking song to this day on Static Prevails is “Episode IV”, with Tom Linton on lead vocals. The split between Jim Adkins and Tom Linton on lead vocals was much more even on this album, the last time that split would be balanced. While it’s understandable why the band would prefer to move in a direction with a defined lead singer, Static Prevails would be the last to feature Linton’s silky smooth vocal delivery in a prominent manner. Linton’s vocal style was much more in line with many of the other emo bands at the time, whereas Adkins’ distinctive tenor range would offer the band a signature sound.

“Episode IV” sounds and feels timeless. So many songs we hear we can apply a time and era to. Songs that sound like they belong to a specific place in history. “Episode IV” isn’t that way at all. It doesn’t belong anywhere, to any time or any sound; it simply is. And what it is can be summed up by words such as haunting, breathtaking and hopelessly romantic. It’s the song you want to have your first dance at your wedding to. It’s the song you want to listen to alone, late at night and in the dark when you’re in an emotionally heavy place. And it’s a song that 25 years later, is every bit as powerful as it was when you first heard it. It’s timeless.

“Claire”, simply by virtue of its lyrical content, is a song designed to take you back to a time and a place and the people you experienced those moments with. Its a song about remembering and that only takes on greater significance with the passing of time. Listening to that song today inevitably gets a slide show of faces and memories running through my head, the people and times that shaped my most influential years. It’s a strangely comforting feeling.

“Anderson Mesa”, the closing track of the album, is an interesting song to dissect. Jim Adkins pushes his vocal range into more screaming territory, quite effectively, in a sound that was fitting with the emo scene at the time. Yet musically, the song is melodic, light at times, filled with additional percussion sounds and more in line with where the genre was going in the years to come. Emo’s roots were in post-hardcore and Jimmy Eat World were born into that. The genre would mellow out some for several years before taking a louder and more pop influenced turn in the early 2000s. “Anderson Mesa” serves as an acknowledgment of what the genre had been vocally, while instrumentally foreshadowing a changing in sound. Considering that this was the closing track on the album and that Jimmy Eat World’s next album, Clarity, would be one of the defining albums of the “new sound”, there’s an extra layer of profoundness to “Anderson Mesa”. An era ending, an era beginning.

Several tracks on this album, such as “Thinking, That’s All”, “Seventeen” and “Digits”, are really solid tracks that will remind long time emo fans of that era’s sound and vibe. “In the Same Room” was the song that really moved me the most upon this most recent listen, in that it is a highlight of the album but not remembered that way. The song’s melody gave off American Football vibes, which is a line I wasn’t expecting to write, but the song would crescendo into almost an emo version of a power ballad, with Jim Adkins vocal range pushing things over the top into remarkable territory. If Jimmy Eat World ever had a Greatest Hits album, my gut reaction is that “In the Same Room” should be a no questions asked pick. 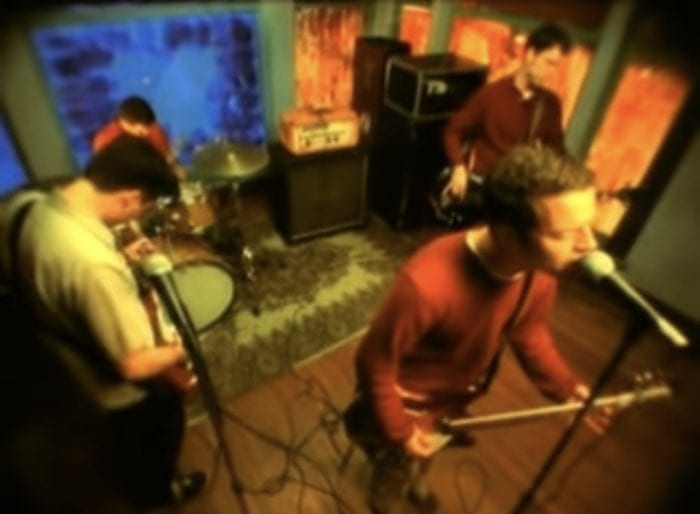 I don’t know if Static Prevails has ever really been given the credit it deserves as an album in this genre. 1996 was a year filled with amazing bands producing music at the top of the game, like Texas is the Reason, and Jimmy Eat World was still on the rise. Their claim to fame would be coming three years later with Clarity but Static Prevails is a really good album that 25 years later not only holds up, but for many of us serves as a reminder of a time passed. A time worth remembering. From a historical perspective, this album offers us a chance to look back at the growth of one of emo and rock n roll’s greatest bands over the last few decades and see a huge step forward, with the promise of greatness to come soon.