First of all, let’s talk about Evil S2’s ongoing motif of the pop-up book announcing the title of each episode. “C Is for Cop” looks different, showing the owner of the hands manipulating the book (at least in this episode) to be Sheryl. After replacing the book on the shelf in the Bouchard daughters’ bedroom shelf, she starts walking down the hallway, muttering something to herself. Sheryl is Big Weird in S2E6, not only on account of that muttering but also the bizarre effigy flanked by candles that she utilizes as some sort of altar. Her behavior is so weird that it even creeps out her granddaughter—and the Bouchard girls, with a vested interest in Kristen’s profession, wouldn’t flee for anything insignificant. At this point, I don’t think there’s any doubt as to Sheryl’s involvement in the occult.

Probably evident from the title, “C Is for Cop” has a relevant and uncomfortable setup: Caucasian Officer Turley, during a traffic stop, observes the black driver, Burke, reaching for a weapon and fatally fires four shots from his own gun.

This isn’t the first time Evil has dealt with racial issues: just a couple of episodes ago, Leland taunted David regarding the massively imbalanced racial composition of priests in the Church. In the first season, the African American girl that woke up mid-autopsy had been prematurely declared dead because of an unconscious racial bias on the hospital’s part. The question this time is whether the cop acted with a bias and whether it was unconscious or not. David is very interested in learning how Turley would have acted had Burke been white.

Turley swears up and down that he saw the victim reach for a gun. In the heat of the moment, it is natural and even expected for the human brain to react rashly, so did Turley act out of adrenaline or racism? Turley confirms that dispatch alerted him to the victim’s race. He, a Catholic, also cites a “demonic intrusion” that lead to his seeing a handgun, which is the Catholic version of the police union’s insistence that he plead temporary insanity when he’s put on trial. 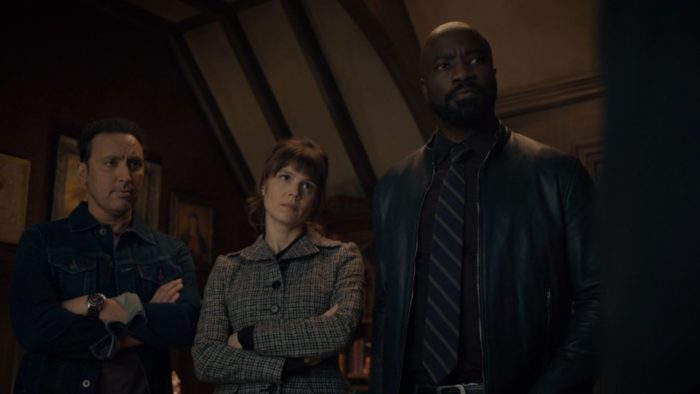 Back in “N is for Night Terrors,” Ben muttered the phrase “Cas3” after waking up from an encounter with Abbey. This is a great example of why those who are afraid of Evil dropping plot threads should rest a little easier, because this bink-and-you’ll-miss-it line isn’t referenced again until now, five episodes later, in another visit from Abbey.

At the time, I had curiously looked up the term and saw that Cas3 is a protein used in CRISPR systems. Cas3, specifically, is equipped to potentially erase targeted strands of DNA and eradicate viruses. DNA manipulation? Where have we seen this before? I don’t know, maybe the crazy evil fertility center allegedly trying to corrupt eggs? As Abbey brutally tortures Ben by imbedding knives in his bound arm, she challenges his decision to abandon his work on the project, hinting at damage he may have caused to some children, which he vehemently denies.

I’m really worried that whatever Ben was working on inadvertently damaged one or more of Kristen’s daughters due to incorrectly utilized Cas3. Lexis has vampire teeth and Laura has a heart defect. What if, in his efforts to pursue a way to eradicate viruses, Ben messed up? Even in the actual science, Cas3 isn’t yet completely accurate.

Something else I thought was really interesting is that Kristen gave Ben her little string bracelet—the one you’re supposed to glance at and confirm whether you’re dreaming, which helped Kristen conquer her demonic nightmares. Three observations I had: Ben wakes up in bed, but the bracelet is on the wrong hand. I suspect this is a production error, but could be Ben’s recently very active imagination playing tricks on him again. Second: with Kristen giving Ben the bracelet, has she opened herself up to night terrors which she is unable to distinguish from reality? Thirdly, in his dream Ben is joined by David, wielding a badass sword, and it’s such an awesome moment for two best friends, even if David is part of a dream. It affirms how much Ben values David’s support, and likely reinforces how David is committed to helping his buddy.

The actual details around Kristen’s supposed murder of LeRoux are thrown into further disarray in “C Is for Cop” as Kristen, starting to feel the walls closing in, sits down with Lexis and more or less coerces a promise to not incriminate her in LeRoux’s death, though Lex’s profound confusion leads to her reminding her mother that their new security system would have gone off had Kristen left the house that night—though she did tell the cops she can’t remember whether Kristen tucked her in that night. To boot, the show is being really stingy with actual visual details of of apparent murder, and muddling whether that action—if it actually occurred—is the source of Kristen’s recent weird behavior. With that in mind: who did kill LeRoux?

Also of note: when chatting with police officer and friend Mira, Kristen discusses Turley. Mira discounts the claims of both demonic possession and racism, defending Turley’s situation as the result of “street sense.” She recounts a similar personal story in which she mistakes a mop handle for a rifle, and is very quick to supplement her story with her arrest record skewing heavily towards African Americans. She also declines an Uber after enjoying a couple of canned margaritas with Kristen, and in the final moments of the episode, absolves LeRoux’s killer (Kristen or not) of actual wrongdoing, openly admits to case tampering, and suggests her own racial bias. Something is very wrong and very suspicious with Mira, beyond the scope of these two events.

Sometimes, Evil  approaches a social issue as the framing device for the episode’s story, and it’s not going to end with sunshine and rainbows. “C Is for Cop” is punctuated with a very real and very prominent conversation around the role of racial bias in the behavior of the police, and the lack of a solution thus far in the real world. Evil isn’t just about the supernatural; it’s about evil itself, and how it manifests in psychology. With a season that’s getting increasingly bizarre, “C Is for Cop” was a hard-hitting reminder of reality.