Of the many odd-couple friendships in Brooklyn Nine-Nine, none have been as bizarre—or as loved—as the fan-favorite pairing of Jake and Doug Judy (better known as the Pontiac Bandit), Jake’s one-time archnemesis turned frenemy. This week’s first episode, “PB&J”, serves as the Pontiac Bandit’s last ride on Nine-Nine, with Jake (and later Boyle) driving Doug from where he’s being held to prison and trying to give him “one last adventure”.

“PB&J” functions as a bottle episode, similar to Season 4’s “The Box”, spending the entire runtime following Jake, Boyle, and Doug from the jail where Doug is initially held to the prison where he has to serve out a five-year sentence. The rest of the Nine-Nine are only seen in brief cuts, so the entire episode is carried by the dynamic between the three characters involved.

After hearing from Doug’s sister Trudy about Doug’s arrest, Jake visits him at the jail where he’s being held to get the full story. As it turns out, Doug has indeed gone straight, and while Doug’s was granted full immunity for his crimes in New York after aiding the NYPD in Season 4’s “The Fugitive”, he’d still had an outstanding warrant in New Jersey, so when he got rear-ended on a trip to a Mega-Target for a deal on a home audio setup, the police showed up and he wound up getting arrested. 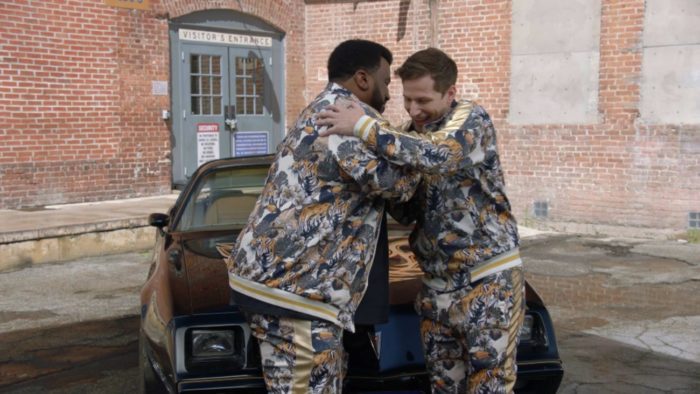 After some “convincing”—i.e. a five-day pass to a local waterpark used to bribe the officer initially assigned to the transfer—Jake winds up being allowed to drive Doug to prison, with the promise of some surprises along the way: a ’79 Pontiac Trans Am; matching novelty suits with a tiger and toucan print; a set of rings inscribed “PB&J”; and a meal that’s an exact match to what Doug would want for his last meal. But despite Jake’s best efforts, Doug can’t take his mind off of his impending prison sentence and keeps trying to guilt-trip Jake into letting him go, only for Boyle to show up and remind him of all the times that Doug has escaped him in the past and insist that they drive the rest of the way in his family bus.

As it turns out, Boyle’s suspicions are accurate—not only is Doug trying to escape, but he already has a plan in motion with the help of his sister Trudy. When Jake confronts him over his betrayal, Doug opens up about how he wound up stealing cars in the first place: he’d been arrested in the past for something stupid he did at the age of 22, and once he had a criminal record it was impossible for him to get a job, which killed his dream of being a landscape architect.

It’s a shocking jolt of realism for the character—normally the Pontiac Bandit episodes are where Nine-Nine goes wildly over the top—feeling more “Blue Flu” than “PB&J”. Sadly, it’s also an all too relatable story of how the consequences of the criminal justice system stretch well past prisons and often serve to turn people into repeat offenders when their options to build a legitimate life become drastically limited.

This leads to a trivia showdown proposed by Jake to determine who the better friend is, which turns out to simply be a stall tactic to allow time for backup to arrive after Jake informs Holt of the situation—or so he thinks. Turns out, Doug was one step ahead of him, reprogramming all the contacts in his phone to Trudy’s number, meaning that Jake unintentionally gave Doug’s crew an exact description of the vehicle they’re driving and their location.

After switching cars—and getting in contact with the real Holt for backup—Jake and Doug continue their drive to the prison. Along the way, Doug continues to ask Jake to let him go, even though it would result in his termination from the force, going so far as to say “you’re more than just your job”. Just like we’ve previously seen in “The Good Ones” and “Balancing”, it’s another piece of foreshadowing that seems to point towards Jake ultimately leaving the Nine-Nine at or near the end of the season, and it’s the most interesting bit of potential world-building found in “PB&J.

By now, Jake is so rattled that he’s unsure whether or not the uniformed officers called in for backup are legitimate cops, so he winds up abandoning them—only for Doug to have been another step ahead of him, having previously reprogrammed the GPS route to the location where his crew is waiting to pick him up. But, after realizing that the thugs plan on killing Jake, Doug winds up betraying them, even though it leads to him getting taken into custody. Except there’s one final twist: a pen “somehow” winds up in Doug’s pocket, allowing him to escape custody and give Jake one last phone call a couple of weeks later from his new life in Amsterdam.

There isn’t anything particularly wrong with “PB&J”, but it definitely feels lacking compared to previous episodes featuring the character and, to me at least, is the weakest episode of Nine-Nine’s final season so far. It doesn’t come close to “The Box”, the show’s previous bottle episode, and despite having the expected amount of twists and turns it definitely feels like this is the episode that suffers the most from the new approach of more realism and less over-the-top zaniness. The friendship between Jake and the Pontiac Bandit is one of the show’s many highlights, and the chemistry between Andy Samberg and Craig Robinson is as good as ever, but it ultimately winds up feeling like something out of the show’s past that doesn’t translate well into the here and now.

What’s most interesting here is Jake’s final decision to help Doug escape; every time Doug has escaped in the past it has been because he ultimately outsmarted Jake and the rest of the Nine-Nine, whereas here Jake explicitly helps him escape after being caught. As mentioned earlier, there’s been a lot of implications being made this season that Jake is losing faith in the police’s ability to do good in the community, and may ultimately end up leaving the Nine-Nine entirely when everything is said and done.

In the meantime, it’s goodbye to the Pontiac Bandit, and one of the weirdest, most wonderful friendships in Brooklyn Nine-Nine’s run.