Halsey is an interesting figure in the landscape of pop music. She emerged out of the post-Lorde/Lana Del Rey scene of the early 2010s, becoming one of a few indie pop artists who achieved commercial success though projecting a brand of faux-edginess. Until Billie Eilish effectively cornered that market with her smash hit “Bad Guy”, it looked like Halsey was going to be the one to emerge victorious when her song “Without Me” hit number one in winter 2018-19. Her brand was very tabloid-drama heavy, mining public drama following her public breakups with big name rappers like Machine Gun Kelly and G-Eazy (apparently when she sung about having bad taste in lovers, she sure wasn’t kidding).

Halsey seemed eager to make a spectacle of her emotional baggage, but often struggled to project it in a way that became artistically compelling. To this day, her best song (“Roman Holiday”) is one of her least emotionally intense, merely reflecting nostalgically on one of the short-lived happier periods of her life. Mostly when she does achieve an emotional impact it’s through sheer force of vocals, with songs like “Bad at Love” and “Sorry” projecting through the ceiling to make their romantic angst captivating. Songwriting has always been the one thing that seemed to hold Halsey back, along with her lack of a focused direction.

Both those things seemed to improve on her last record Manic, her subtlest and most artistically focused record that managed to incorporate big chart hits like “Without Me” and “Graveyard” into a track list of melancholic rumination. In the context of Manic, the relative mediocrity of “Without Me” became almost purposefully tragic: it’s framed as this song that she’s been performing over and over for more than a year and which has lost all meaning to her cause she’s just not in the same place she was when she wrote it. It actually makes the rest of the album more poignant, like a concept album about a pop star where the singles are what she performs on stage and the deep cuts are the songs she sings to herself in her dressing room while waiting to go on.

Here in 2021, she’s moved on from the acoustic soul searching of Manic, onto something quite different. When she posted the album cover and title on Twitter, revealing herself channeling Cersei Lannister, seated bare-breasted on a throne, clutching a baby, dressed in regal attire, beneath the album title If I Can’t Have Love, I Want Power, itself a direct homage to another Game of Thrones character’s “let it be fear” resolution, it was, mildly speaking, rather absurd. This is an artist who had struggled to project the most simple and accessible of emotions—magisterial evil was surely going to be beyond her, even with Nine Inch Nails alums Trent Reznor and Atticus Ross on side to produce. 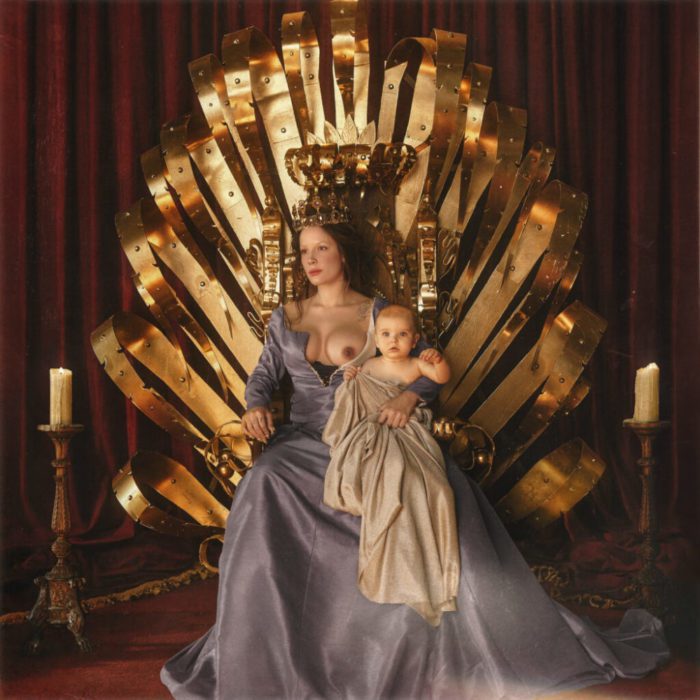 Halsey has dabbled in rock before, sometimes quite successfully, as with her 2019 single “Nightmare” which showed she had the voice for it. However, a cynic could easily look suspiciously at the timing of this. Olivia Rodrigo is still charting with her little pop-punk revival (emphasis on pop), and she’s not the only one, with Miley Cyrus, Willow Smith and even her own ex MGK, among many others, leaving poppier domains behind and taking their cues from rock legends of the past, following in the footsteps of more creative and acclaimed modern pioneers like Poppy and Rina Sawayama.

As one would expect from the producer credits though, it’s clearer which of the many strains of rock music Halsey’s new album is infected. There’s the odd droney noise passage or distorted guitar layer that shows the influence of Reznor and Ross. However, If I Can’t Have Love, I Want Power is a more varied record than just that, somewhat to its detriment. I’ve mentioned that Halsey has trouble sticking to a single sound and it holds true here, nor are all the tunes quite up to a memorable standard. The trickly acoustic cut “Darling” plays out like the requisite soft song every album needs in the second half, “honey” is more Paramore than NIN and the crunchy synths of “Whispers” sound very contemporary. We get trap snares, house beats and synth arpeggios on “I am not a woman, I’m a god”, stark, ominous pianos on “The Tradition” and trippy beat breakdowns on “Girl is a Gun”. I applaud the diversity here and I’m shocked at how well it’s all sounding.

Perhaps I shouldn’t be, Reznor and Ross are seasoned pros who’ve always brought their A game and I’ve always had a fascination for Halsey. Despite being aware of her flaws and how her voice may sound thin to others, I’ve always appreciated what she brought to a track and her versatility and vocal power are well established. Nonetheless, it’s to be affirmed that If I Can’t Have Love, I Want Power is arguably her strongest record to date. The opening track establishes its ambitions with what appears to be an attempt to somewhat follow in the footsteps of Lingua Ignota, whose monumental latest release I was frankly too scared to attempt to review. The religious imagery, the scalding pianos, the haunting dramatic vocals and the tale of patriarchal traditions of ornamentalising and objectifying a woman depicted as a ritual sacrifice of a woman’s well-being, it’s a shockingly effective distillation of Ignota’s style and aesthetics, skillfully packaged for an audience of normies.

Other highlights include “Bells in Santa Fe”, where the strident synths build beautifully into the multi-phased pre-chorus, even if the attempts at religious imagery do come off rather absurd, and the edgy, sultry “Lilith” featuring another of the record’s strongest choruses. It’s the poppiest and most fun moment on the record with Halsey seeming more in her element than ever. Possibly my favourite track though is the penultimate song, “The Lighthouse”, a swaggering rock jam styling the narrator as a lonely man eating siren, the stomping drums, guitars and cymbals perfectly evoke the crashing waves in a nautical storm, with Halsey’s seductive voice cutting through the sea spray impeccably.

The try-hard extra-textual aesthetics may make the album a tough sell, but sit with it and you may find If I Can’t Have Love, I Want Power to be a surprisingly solid, sometimes even captivating listen. I have no desire to fault Halsey’s ambition, nor particularly her reach, as frankly she hits the mark more often than not, even if it is an adjustment to take her as seriously as her record demands you do.