With their stunning red-carpet arm-in-arm turn at the Venice Film Festival last week, actors and longtime friends Jessica Chastain and Oscar Isaac have been much in the public eye recently. The two co-star this week in director-writer Hagai Levi’s update of Ingmar Bergman’s Scenes from a Marriage. There, Chastain and Isaac will take on updated versions of the roles first played by Liv Ullmann and Erland Josephson in the 1973 miniseries that made international icons of its stars. Bergman’s original, a starkly-shot, elegantly-scripted, and adroitly acted take on a decade’s worth of marital turmoil, remains despite its dark tone one of his signature works, a treatise on the complexity and undulations of long-term relationships.

That Scenes from a Marriage is being remade—or, to use Levi’s word, “adapted”—is itself unusual. Bergman’s is a name rarely associated with remakes or adaptations. The iconoclastic Swedish director usually, if not always, composed his own original scripts, worked with his own regular stable of cast and crew—Ullmann and Josephson alongside Max Von Sydow, Gunnar Björnstrand, Harriet Andersson, and Bibi Andersson the most frequently appearing among them, and over time developed his own auteurist style. A handful of his films were adapted from the stage or from legend and a couple from novels, but by and large, Bergman’s tales were ones sprung predominantly from his own invention.

Conversely, of the 45 feature-length fiction films Bergman directed (including Scenes from a Marriage, which first appeared on Swedish television then was recut for later theatrical release), hardly any have ever been remade by other filmmakers. Indeed, it’s difficult to imagine another artist’s take on such intensely personal or visually iconic films like The Seventh Seal, Wild Strawberries, Persona, or Cries and Whispers. Those remain Bergman’s and Bergman’s alone.

Some of Bergman’s work has been adapted to the stage, but to remake Bergman’s work for the screen is an audacious and unprecedented step. Bergman’s cinema has been profoundly influential on directors as diverse as Woody Allen, Nicholas Roeg, David Lynch, and Noah Baumbach, but none of them have directly remade any of Bergman’s individual films. Notwithstanding Wes Craven’s The Last House on the Left as a modern, radical updating and genre-bending of Bergman’s The Virgin Spring, filmmakers have largely left Bergman’s oeuvre to stand as is, a testament to the Swedish director’s identifiably idiosyncratic form and content.

But if there is any work of Bergman’s that would seem, at least on the surface, easily transported to another time and space for a new audience, it might be his 1973 series Scenes from a Marriage.

Bergman’s series was profound and revelatory in its time. A low-budget, six-episode, 281-minute series shot in Stockholm and on Fårö (the island that had become Bergman’s muse), Scenes from a Marriage depicted a decade’s worth of marital turmoil between psychology professor Johan (Josephson) and family divorce lawyer Marianne (Ullmann), with some episodes drawing on the director’s own experiences, including his relationship with Ullmann. (Bergman was notorious for his romantic relationships with nearly all of his lead actresses.)

Bergman’s series was shot primarily indoors, with simple sets and camera setups designed to focus viewers’ attention on his actors and Ullmann and Josephson onscreen for the majority of the narrative. Unlike some of his more experimental arthouse fare, in Scenes there are no special effects or conspicuous edits: the focus is entirely on the actors and the characters they portray. Ullmann’s Marianne takes small, hesitant steps forward in her life, always contemplating, it seems, how each calculated word or act might impact another. Josephson’s Johan is a man of intellect who can come across as contemptuously obtuse, a braggart whose fragile ego is assailed on several fronts as the series develops.

Ullmann and Josephson are more than familiar with each other, having acted together in prior Bergman films and continuing their professional relationship (and with Bergman) for decades following. The two would even reunite as their Scenes characters in Bergman’s 2003 Saraband—and display the kind of chafing familiarity with each other only longtime domestic partners can know. “We can talk about everything,” said Ullmann of Josephson in a 2003 interview. “He is my very, very best friend.”

Bergman’s long takes and minimal editing, sometimes with the characters blocked in two-shot, demand much of his actors, whose preparations must be exhausting and performances error-free. There is, in short, little opportunity to save a flubbed line or faux pas. The opening scene of Bergman’s original is in and of itself a masterwork of careful delivery, furtive reactions, small gestures, meaningful lines, and intentional interludes. At their apartment, Johan and Marianne are to be interviewed for a magazine, their having just celebrated their tenth anniversary with a renewal of vows. The interviewer is careful to select a room and organization that will feature the couple handsomely in photographs. 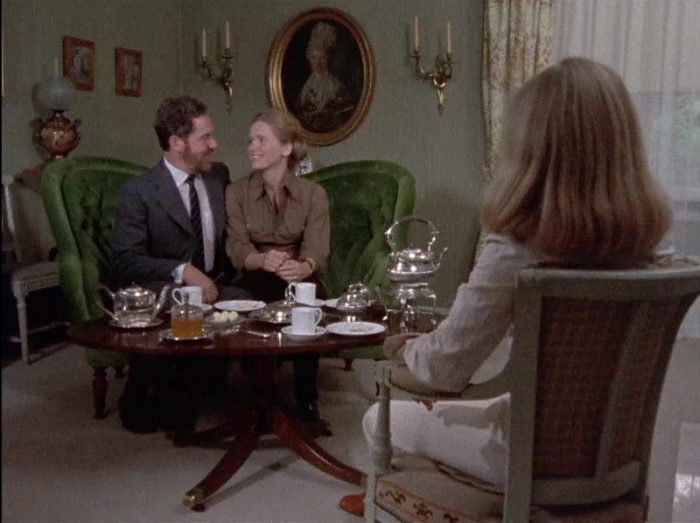 This opening scene is all about presentation. While Marianne is guarded and uncomfortable with the situation, Johan is quickly boastful—of his looks, his accomplishments, his affluence, his politics. With each of his successive boasts Marianne offers a clue to the conflicts the two endure, as Ullmann writhes uncomfortably, glances distractedly, or otherwise signals some small bit of distress. Watch closely, and you see one of the screen’s greatest actresses lend to Bergman’s script a nuance and depth that feels very much like the trappings of a decade-long marriage.

Through this first scene—some sixteen minutes long—Bergman’s camera remains largely static and footage uncut, at least through most of its first half. The simple two-shot introduces both characters but allows us to register Marianne’s discomfort with Johan’s boasts and his impatience with her lack of confidence. At one point, Johan and then Marianne excuse themselves and the reporter is left alone to snoop: behind a closed door is a mess of tangled laundry and rumpled newspapers atop an unmade bed. Their public-facing persona is a façade hiding something messier and more unkempt.

When the interview continues with Marianne alone, the reporter now uncomfortably close to her subject, close-ups on Ullmann’s hesitant replies and darting glances further emphasize her discomfort. As the series progresses, Ullmann and Josephson trade grievances, insults, and affections, their love for each other undulating through several life changes. Since Scenes from a Marriage was never intended for a theatrical release, it included few exterior and or tracking shots, something cinematographer Sven Nyquist later regretted.

Yet even without the magisterial compositions of The Seventh Seal or the arty montages of Persona, Scenes exhibits a naturalistic, relaxed, documentary-like style not too far afield from the Direct Cinema movement led by the Maysles brothers and D. A. Pennebaker. The series was recut for a theatrical release, with episode titles having changed to “chapters” and the content trimmed by 12 minutes, in 1973.

Scenes from a Marriage would prove as influential as, if not even more so than, Bergman’s more expressively cinematic efforts. It was reported to have been responsible for growing divorce rates in Sweden, though Bergman may simply have been reflecting a growing honesty in intimate relationships that accompanied a waning stigma against divorce. The series would influence American television—before it became a Dallas spin-off, the series Knots Landing was imagined as an American Scenes from a Marriage by its creator David Jacobs. More recently director-writer Noah Baumbauch’s Marriage Story was hailed as an homage to Bergman’s Scenes, from its narrative to its performances and even its compositions.

That even a few years after its release an American television director was considering developing an Americanized version would seem to suggest that of all of Bergman’s work, Scenes from a Marriage might be the most adaptable to a new time and place. In what country or milieu do domestic partners not struggle with the weight of expectation, of change, of intimacy, or honesty? Is there a place or time to which the story of Scenes of a Marriage—its secrets, lies, affronts, affairs, and revelations—would not apply?

In a word, no. Although his version of Scenes was a perfectly Swedish affair, the tale it told may be the most universal of all of Bergman’s work. Bergman authored a script that sets the scenario in the specifics of a time and place and cast actors in Ullmann and Josephson who could convey the vast range of human emotion (as could Ullmann and Josephson). Can Scenes from a Marriage work in 21st-century America, in a time of polarized politics, fourth-wave feminism, social-media misinformation, and technological innovation?

If there are any two actors who would seem up to the task of conveying the same levels of intimacy as Ullmann and Josephson, they may be Jessica Chastain and Oscar Isaac, two accomplished professionals who met, first, and developed a friendship while studying at Juilliard, and whose talent and drive has taken them to the top of their professions. Hagai Levi’s remake may alter the setting, circumstance, and particulars of Bergman’s original, but it promises to be like Bergman’s a showcase for the talents of its stars and a treatise on the complexities of managing a long-term relationship through a decade’s worth of travail and turmoil.

J Paul Johnson is Executive Editor and a writer-reviewer at Film Obsessive. A retired professor emeritus of film studies and an avid cinephile, collector, and curator, his interests range from classical Hollywood melodrama and genre films to world and independent cinemas and documentary.

More From: Scenes from a Marriage