“Swingers Still Deserves Its Trendsetting Status’ is now available on Audio, read by author Don Shanahan, exclusively for our Patreon supporters. For just $3 a month you will have access to our full library of Audio content, plus three new uploads every week. To sign up visit our Patreon page: https://www.patreon.com/25YL

Folks love their cult classics. Fans want to be in the cool group that contains the thing they love. Being niche is part of the appeal. If you want to raise a film to an even higher celebrated status, get that cult classic to become a trendsetter along the way. You have something special if you can move needle beyond the dedicated section and into greater society. One movie that falls within the center of a Venn diagram formed between cult classic and trendsetter is 1996’s Swingers. It’s both of those things and then some.

Looking back 25 years, mainstream pop culture was hardened by grunge rock on one side and gangsta rap on the other. The internet wasn’t a thing yet, and, thanks to the Quentin Tarantinos of the world, grassroots independent filmmaking was in its prime and starting to get studio support. Launching pads were open and careers were there to be made by anyone with a great idea and the work ethic to get it made.

In the middle of all that came the ambition of Swingers from the hungry and eager gut of Jon Favreau. Wholly admiring bygone eras, this little indie darling bucked the mainstream and dazzled those looking for something dreamy, yet still honest, for its coarse present day. Then and now, Swingers stands as a beloved time capsule for style, music, dating, and male friendship.

The flick follows a struggling actor and stand-up comedian who has been dealt a personal blow that saps his creative and professional strength. No matter what fun or opportunity Mike Peters (Favreau) pursues in his adopted habitat of Los Angeles, he cannot seem to get over the breakup of a six-year relationship from back home in New York. On the supportive side, Mike’s got a calming confidant in the form of Rob (Ron Livingston), a fellow actor and old New York buddy. Rob serves as the homely angel on Mike’s shoulder, matched by a gregarious devil named Trent (Vince Vaughn) on the other shoulder.

While Rob plays the de facto therapist chasing his own acting gigs, Trent is the firecracker always shrugging off responsibilities with party-hopping and female conquests. Rob’s speed is golfing; Trent’s speed is putting on suits, scraping up some cash, and driving to Las Vegas. One’s words are soaked in empathy and the other’s jolt with sparkling initiative. At the heart of Swingers is that tug-of-war journey for Mike, as he tries to figure out his own speed to get back out there where there are other fish in the sea.

Throughout Swingers, the high ground and underground of Los Angeles is canvassed in search of the right people and the right social scene for the crew’s pickup artist goals. The movie rode the early waves of the “swing revival” and its throwback ambience. With every ordered scotch, puffed cigarette, and wingtip shoe worn, young people sauntered and dressed to impress without edginess or angst. How friggin’ cool did all of this look radiating out of this little movie? 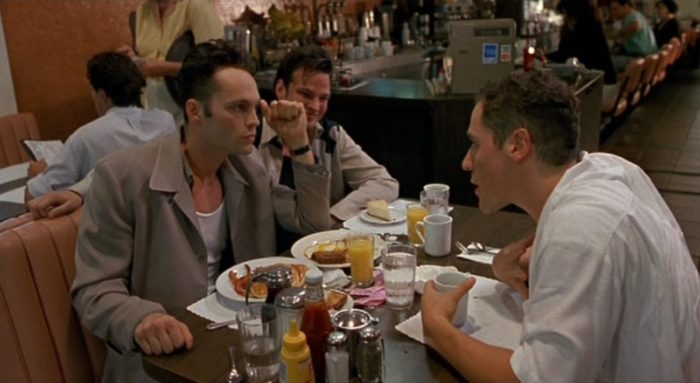 It’s not just how it looked, but how it sounded too. Favreau proved in this debut that he had a gift for writing and staging conversational energy that fired neurons and fed character development. Swingers is filled to the martini glass rim with lines that would become immortal catchphrases. Not only were they humorous, but they defined the attitudes of the era and of the struggling artist characters. Swingers would create a nomenclature of coolness that remains to this day. Now that’s what trendsetters do.

The curated music that filled these swanky spaces became the heartbeat of what solidified Swingers’ trendsetter status—opening with Dean Martin and bouncing between old ditties from the likes of Louis Jordan and Bobby Darin to grooves from Average White Band and Love Jones, the thermometer of vibe bursts through the roof. The Swingers soundtrack went certified gold and spawned a second volume, Swingers Too!, three years later.

Thanks to new popularity rekindled by The Mask two years earlier (and continued after by Blast in the Past and more), the twirling and whirling of swing music and its irresistible audience participation capability was the highpoint of the movie’s influence on creating popular style. By the time Jon Favreau’s Mike and Heather Graham’s Lorraine are cutting a rug to the horns of Big Bad Voodoo Daddy, there’s not a guy or gal watching this movie not tapping their own toes and dreaming about the same chance at sweeping a suitor off their feet on a dance floor. The way Jon Favreau opens Mike up from uneasiness to full flourish in that scene is equivalent to any big game moment from a sports movie.

Many people who look back on the 1990s seen in Swingers and love to say it was a simpler time. Hell no! It was so much harder than the connected conveniences of now. You had to be there and, like a Lord of the Rings meme, “I was there…. 3,000 years ago” taking swing dancing classes in hopes of nabbing my own Heather Graham. The dating culture in Swingers is a prime example to examine. 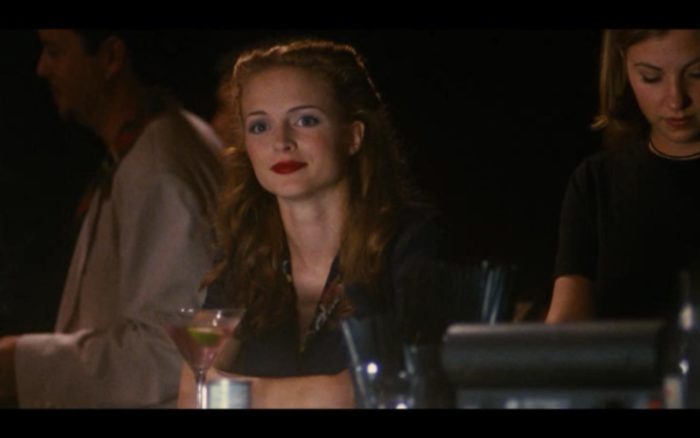 In 1996, there was no online dating footprint with algorithms to accelerate matchmaking and start communication channels. Those faces you saw across your chosen social venues of fellow prospective partners were completely unknown quantities beyond their book cover looks. Their visages were not accompanied by framed profiles citing door-opening likes and dislikes to help scout your verbal approach. You actually had to interact face-to-face, right then and there, with an extroverted gear of conversation skills to learn any personal information. All of that risk just to get a phone number became a hard maybe for the hopes of continuing the conversation further, let alone booking an actual date on the calendar in the immediate future.

Many scenes of Swingers chronicle those pursuits and demonstrate all of the difficulty that had to be endured in order to grasp a hint of success. Look how much work Trent does in Vegas to get close to a sheet-tumbling home run only to be undone by weakling wingman failure from Mike. When the camera lingers on the sidelined, half-naked Vaughn playing the silent disappointment, the cringe is all there. That sensation gets called back even better with the final outro scene at a diner that would go on to inspire the “Superhero Cafe” segments of the popular “How It Should Have Ended” YouTube channel.

The defeat is even greater in the callback implosion scene later when Mike finally scores some digits only to blow the advised follow-up. First off, some kids today probably can’t even imagine calling a girl back in-person, let alone leaving a tangible and inspiring voice message on tape with no digital re-dos or fiber optic safety net. There was no “sliding into DMs.” You had to talk the talk. To watch Mike comedically screw up attempt after attempt is both hilarious and painful.

Swingers launched no less than four careers and reignited another. Director Doug Liman scratched together $250,000 of funding to make this movie and sold it to Miramax for $5.5 million. Granted a MTV Movie Award for Best New Filmmaker, Liman’s been chasing bigger paychecks ever since in the action genre (The Bourne Identity, Mr. and Mrs. Smith, Edge of Tomorrow). The movie was a splashy boost for previous teen actress Heather Graham, who broke through opposite the Coreys (Haim and Feldman) eight years earlier with License to Drive. Graham’s star status was elevated from its indie holding pattern to the B-list success of her prime in movies like Boogie Nights, Bowfinger, and Austin Powers: The Spy Who Shagged Me. Those are two unique bumps, but, truth be told, Swingers is still a guys movie, and the other three made men reflect that emphasis. 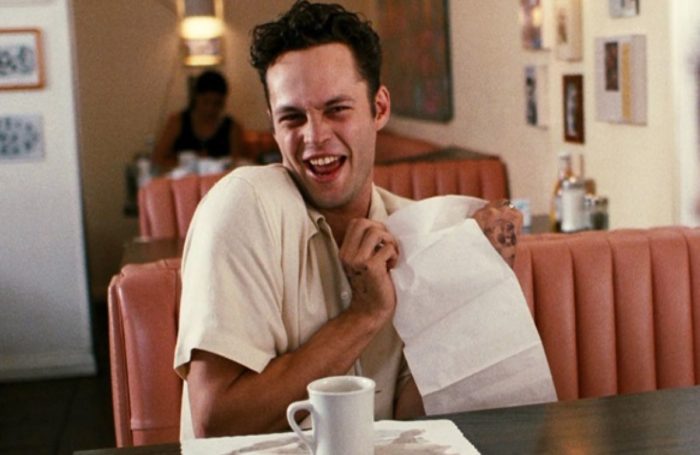 The highest winner of the bunch was future A-lister Vince Vaughn. Don’t we all have that friend who’s an asshole, a successful asshole, but still an asshole like Vaughn’s Trent from this movie? His brazen charisma was pure magic. Vaughn’s loquacious energy level was then, and now, rarely matched or topped. His famous kill-the-bunny monologue is one for the ages, and he sells it like he made it up on the spot. A guy like that may be an asshole, but he’s a powerful, jump-starting cheerleader to have in your corner.

Hopefully, we all have a friend like Livingston’s Rob as well– the kind of buddy who brings you a sandwich and a figurative shoulder to cry on when you need it. Where Vaughn slays with loud pizazz, Ron Livingston swoops in and kills you with kindness. A year before his own breakout of Office Space, he is the quiet scene stealer of many moments.

Both of those male relationships pour into Favreau’s central lead with all of their boosting benefits. Character here is built through cutdowns of emasculation and apologetic bro-hugs of empathy. Favreau plays off Vaughn and Livingston so well to show the constant pendulum of dread between glimmers of hope and memories of mistakes. Jon is writing and directing more movies than acting in them nowadays, which is a larger use of his talents, but I miss him as a lead.

In the end, this Swingers journey is about confidence gained, confidence granted, and confidence earned. The social and professional victories and losses come and go—it’s the trajectory of the confidence underneath that guides one’s course. As they say in the movie, “that’s the rub” of Favreau’s polished semi-autobiography.

With all of its inviting pep and wraparound camaraderie, Swingers becomes a movie that could answer many people’s question of what cast you would love to join and hang out with inside the movie itself. As an impressionable teen on the cusp of entering those same twenties seen on-screen, that was me—the rural Midwesterner that could never dream of Los Angeles. I wanted to taste the booze and ride shotgun to Vegas. I wanted to dress up, comb that former hair back, cruise parties, dodge cigarette smoke, and score a dance with stunning dame. Man, take me back to 1996! 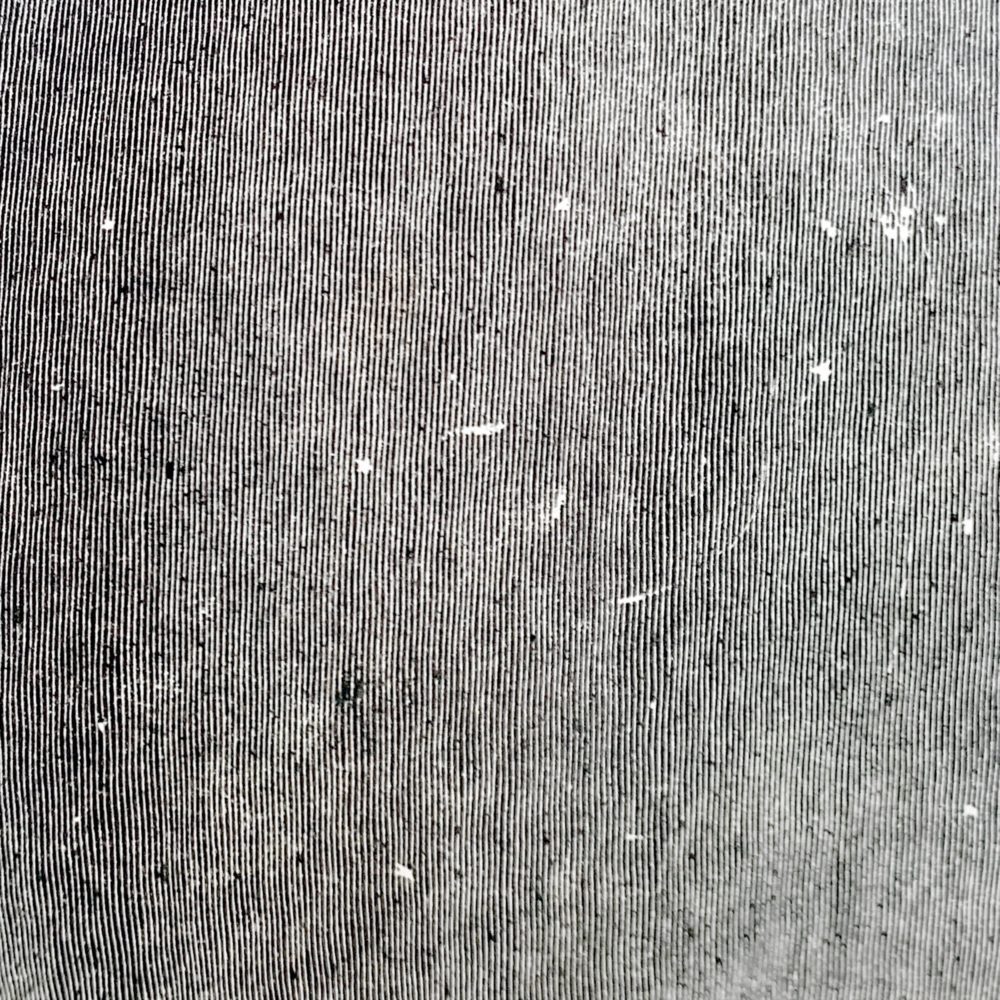