Excuse my language, but I’m a sucker and a fan of a good “mindf–k” flick.  From the subtle to the extreme, I love getting the wool pulled over my eyes and the carpet pulled out from under me during a cinematic experience. They are not always weird niche films and not always horror movies. Some can be romances (Eternal Sunshine of the Spotless Mind) and others can ascend to be blockbusters (Inception). No matter the crudeness of the name, mindf–k films are their own storied sub-genre. Den of Geek composed a top 10 worth your perusal. Digital Spy has a decent list and even a few IMDB users have chimed in. Take a look and you will see many favorites and know what I am talking about. The underseen independent film The One I Love is an extremely worthy entry to crack into those lists.

In today’s day and age of instant information and prevalent spoilers, it is hard for a secretive film, let alone a good mindf–k film where secrets are essential, to succeed. Too often, overindulgent marketing or sniping paparazzi ruin plot clues before a movie even finishes filming. If you need examples, just look at the endless stream for everyone who takes a sip of coffee or a piss break on the set of a Star Wars or Marvel Cinematic Universe film makes social media headlines. Movies get ruined before they even get their full chance.

Over twenty years ago, during the summer of The Sixth Sense and The Blair Witch Project, we would have never heard of this kind of stuff during film production that we do now. Today, filmmakers, even the hush-hush Christopher Nolan, almost have to go the unnoticed independent route to pull off a true under-the-radar film. Anything bigger alarms the Twitter-sphere of spoilerification.

That was the route taken in 2014 by director Charlie McDowell and screenwriter Justin Lader for The One I Love. Both were making their feature film debuts from short film specialization. Produced by Room 104‘s Mel Eslyn (and her mumblecore genre people who stewarded Safety Not Guaranteed, Your Sister’s Sister, and Touchy Feely) this film debuted at the 2014 Sundance Film Festival to rave reviews and played at twelve other festivals that year, including Tribeca in New York, where it gained more and more momentum and notoriety.

As prominent streaming availability has carried it on since its festival run, The One I Love is a film I hope continues to get a wider audience through the streaming algorithms to catch on with more popularity. Even though the film is seven years old, I refuse to spoil it even here. It deserves its mindf–k mystery intact. What follows is the absolute most I can explain without ruining a great experience.

Indie darling and TV veteran Mark Duplass, an executive producer on the film with his long-time business partner and brother Jay, stars as Ethan. He’s a difficult and straight-laced square of a husband that is watching his marriage crumble around him. His wife is the fragile and disappointed Sophie, played by Her Smell star Elisabeth Moss, who longs for the spirited guy Ethan used to be. Their spark and attraction has dissolved, no thanks to hinted past indiscretions by Ethan. Nothing they try works and an frustrating awkward distance grows after each failure.

To save their marriage under Ethan’s suggestion, they have been seeing a relationship therapist, played by Ted Danson. After several unsuccessful sessions, the therapist recommends a couples retreat vacation home that he manages outside of the city in rural southern California. The place is a welcoming and poshly-styled estate, complete with orange groves, a lovely outdoor pool, and a quaint guest house. Ethan and Sophie find worthy enthusiasm at the chance to escape their home stress and relax at a change of scenery. They book a full weekend at the retreat and start out having a great time.

It’s here that I have to stop. That’s all I can say, again, even for a seven-year-old film. What follows during the course of their weekend away is a slow-building buffet of coyness, mystery, and WTF provoked thoughts. See it, come back here, and we’ll talk.

The clues are here that Ethan and Sophie were college sweethearts who used to have plenty of youthful and careless fun. They’ve aged now to something more boring. When they try to recreate older things they used to do, they don’t work anymore. Couples, especially married ones, need to evolve with their age and experience. What worked in your 20’s isn’t going to work in your 30’s, 40’s, or later. Always evolve and look for new things to do and enjoy together.

Taking that notion futher, if your relationship spans years, inevitably, your spouse or significant other is going to change in temperament, maturity, attraction, etc. Some couples find that those changes reduce or take away from the person they remember falling in love with. The goal becomes either to regain or maintain those ideal qualities of yourself and your partner. Staying true to your best traits is a hopeful step to never losing that spark in a long-term relationship.

There is a microcosm of conflict within The One I Live that dives into the universal thread of trust in a marriage. Trust is the number one thing that either holds together or destroys a relationship. It is the fabric of every relationship. It is a cardinal need that even trumps the more physical qualities of attraction. For Ethan and Sophie, their trust in each other is already frayed.  The events of this film have the chance to either repair what is damaged or create even more tears in fabric of trust.

With that raw emotionality on the table, danger is far in the backseat here and none of the tricks are cheap. This film is more Alfred Hitchcock than Stephen King, more The Twilight Zone than Tales from the Crypt, and way less scientific than The Outer Limits. To save the fun, the comparisons stop there, but I hope they whet your appetite.

The One I Love is a thinking film that hews much closer to the romantic comedy vein of its trailer, but offers just enough icy and sobering implications to get that hamster wheel moving in your head that will nudge you ever so slightly to the edge of your seat. You won’t be gripping your arm rest or partner’s hand in tension. Rather, you’ll be retreating to crossed arms of curiosity and chin-rubbing intrigue and attention. Clever smiles outnumber dropped jaws.

What I can say about The One I Love is that the result was outstanding. Mindf–k movies are hard to write, so kudos to team of Lader with the screenplay and McDowell for the direction. The two would later collaborate on The Discovery in 2017 and next year’s Windfall. Sometimes the obscure developments of pitched ideas on paper don’t translate well to film. It’s easy for them to be too “out there” and I applaud those two for their creative integrity.

The One I Love holds a good tone of spritely delight rather than taking the easy way out of shock and violence. The underlying musical score from the team of Danny Bensi and Saunder Jurriaans (Martha Marcy May Marlene and fellow streaming winner The White Tiger) bends the quirkiness just enough to not be over the top. It is a great compliment to say that the ideas involved are more dangerous than the scenarios. That’s an outstanding subtle art to pull off and this film nails it.

Anyone who has seen Mark Duplass outside of his early shenanigan days of FX’s The League boldly understands that he is a a real actor hiding in too many ensembles. In the span of two years, Safety Not Guaranteed and The One I Love showed me Duplass’s promise and immense talent beyond one-up-manship jokes that he used to do next to the likes of Nick Kroll, Steve Rannazzisi, and Paul Scheer. 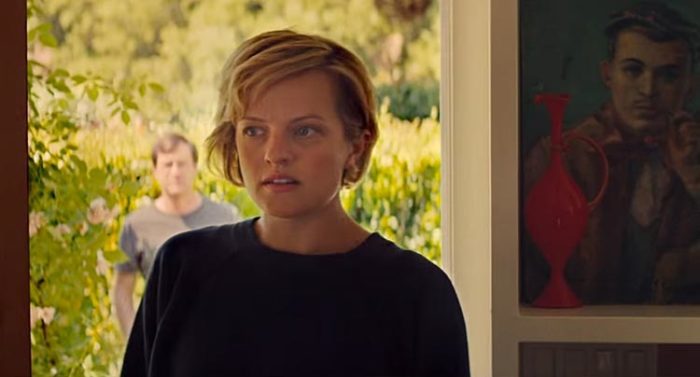 Back in 2014, the same can be said of Elisabeth Moss. Evolving far from her Mad Men days, she too has become a master of having more going on beyond each and every facial expression of her shrewdly chosen performances this past decade. The plot of The One I Love required both Moss and Duplass to display swinging differences of nuance and shifting motivations as things get thick and heady. Both performers acquit themselves superbly.

Any twist or turn can be the catalyst for a mindf–k film. Sometimes, once you see that kind of film once, the cat is out of the bag and repeat viewing is unsatisfying or even unnecessary. The truly good mindf–k films don’t spend their entire arsenal in one sitting. They intentionally choose what to reveal and what to leave open-ended or ambiguous. Such an effect can be a fine line. What constitutes revealing or explaining too little from revealing and explaining too much?  The One I Love has that kind of measured quality. Some are going to want more answers. Some are going to love the challenge of drawing their own conclusions.

Because of that, The One I Love joins the good mindf–k films that beg for repeat viewing. The good ones make you want to watch them again and again to detect more layers, learn more details, or solve more questions. The One I Love pushes you and urges you to go back for more clues and hash out new questions and answers. It doesn’t play its whole hand and I like that about a mindf–k movie. For me, it’s one of the most unsung films of the past decade.