Folks, it’s been a year, but fortunes and health is looking up enough to maybe get back to some good old fun. For movie fans, I think it’s high time we mix a little whiskey with our night out. As the Irish like to say, when a party gets rowdy, they call it a “hooley.” With that vibrancy in mind, the 7th annual Irish American Movie Hooley returns to the Gene Siskel Film Center in Chicago this weekend.

Across September 24th through the 26th, Hibernian Media Chairman Mike Houlihan and Film Center Director of Programming Rebecca Fons present a three-film selection for eager viewers looking to celebrate the art, culture, and spirit that connects our country with our European neighbor across the Atlantic. Tickets are available at the Center and online.

The Hooley begins Friday night with the world premiere of Mike Houlihan’s self-directed documentary In Search of Weeping Jim, which chronicles the heirs of former Chicago Alderman James Ambrose Kearns. The man immigrated to our fair city in 1884 before growing into public office. His claim to fame was being the political figure that introduced the legislation that would create the city flag of Chicago. For years, his American-born descendants traveled to his Irish roots to connect people and cities

On Saturday the 25th, filmmaker Colin Broderick returns to the Irish American Movie Hooley with the Chicago premiere of his new feature film A Bend in the River. This is his follow-up to his well-received 2017 film Emerald City which played here at the Hooley. The film follows a writer returning to his native Ireland after a quarter-century of time away. A Bend in the River stars John Duddy, John Connors, Nicola Boyle, and others.

Closing the Hooley on Sunday night is the extraordinary social media-themed documentary Endless Sunshine on a Cloudy Day. The directorial effort of John Connors traces a father and daughter gripped by terminal cancer at the same time. The film follows Instagrammer Jade McCann and her father Anthony presenting a unique first-hand perspective of their struggles.

At the Siskel Center, The Irish American Movie Hooley offers audiences the unique opportunity to meet the directors and stars of all three films in person and share “the craic” with them after each screening. Paddy’s Irish Whiskey is scheduled to offer a sampling station in the lobby of the Gene Siskel Film Center before each screening, and also hold a free “whiskey raffle” after each screening. This is a great opportunity to celebrate artistic talent and the return of film events to Chicago.

For more information about the Movie Hooley, visit: http://moviehooley.org 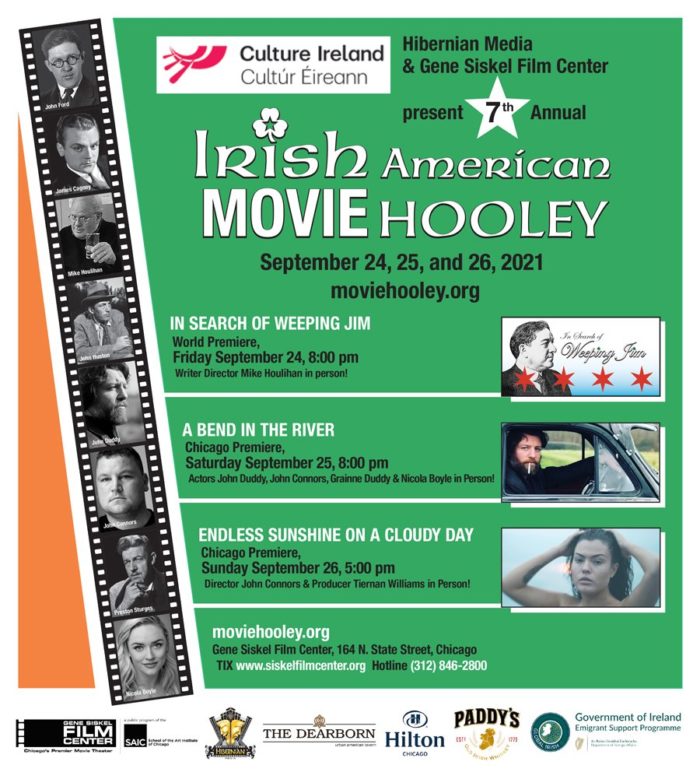