It’s safe to say everyone loses their composure in their own way every now and then. The circumstances and the outcomes of those moments define their severity. What sets them off? How far do they go with their actions? What fuels it further or how long does it take to quell the fury? How do they return to their own normal or, worse, can they even bring it back together on their own without help or intervention?

The answers to those measured questions are what makes Surge, starring the award-winning Ben Whishaw, so alarming and downright terrifying. Set over the course of just under two days in London and shot guerrilla-style with handheld cameras that weave through the crowds and shifting locations, Surge careens through one man’s unpredictable downward spiral and the isolated damage it causes. These kinds of movies are certainly not for everyone, but this one is a fascinating test of stamina and understanding.

Anecdotally, outbursts that reach a criminal magnitude seem to come from people no one noticed before. After the events, we always get those astonished testimonies from neighbors, coworkers, and other witnesses that go on and on about “I would have never thought it could have been someone like them,” “They were always so quiet,” or “I didn’t think they were capable of something like that.” I know we’re not supposed to pigeon hole, but the “quiet ones” need attention.

I can hear you already asking “Wait, that guy?!” Yes, that Ben Whishaw is the vessel of Surge’s bedlam. The same wonderful man known to most as the cherished voice of Paddington Bear and the cheeky gadget master of James Bond proves he is more than capable of portraying a different type of character. Whishaw uncorks an unrecognizable and eruptive performance that bites, scratches, and claws to become one of the year’s best. Stunning talent like this needs to be seen to be believed.

Ben Whishaw plays Joseph, a solitary and tired thirty-something with no clear friends and few extroverted traits. He is a walking, coiled ball of disquiet with sullen eyes, a head held low, and an array of uncomfortable contortions. Joseph’s clenched joints, loud swallowing, and a biting urge count as troubling and unchecked ticks. His antisocial nature hides many of these quirks in public while he works as a straight-faced and unassuming airport security worker in London.

No one as tightly wound as Joseph should have a stress-centered job like that one. His fearful nerves and difficulty with people do not mix with an airport’s bottleneck of inconvenient urgency and invisible threats all wrapped up in crude monotony. Buried in that work, the signs of unraveling begin early for Joseph in Surge.

Combine the workplace angst with an episode of rehashed disappointment from his parents (Ian Gelder and Ellie Haddington) and something inside Joseph breaks more than the glass he chews on. Continuing little failures and humiliations beset him and, with rapid disintegration, Joseph’s desperation sends him on a violent and destructive course. By the time he’s robbing banks, unspoken complaints of civil disobedience escalate to another level of forthright peril and, for the character, a path of cathartic rebellion.

Surge thrusts kinetic energy into the mechanics of slow cinema. The movie is scoreless and backed by a sound design by Paul Davies (A Private War) that amplifies every tap and tear. The narrative written by debuting short film director Aneil Karia and co-written by Kaleidoscope director Rupert Jones and Babyteeth playwright Rita Kalnejais is intentionally aimless and without spoon-fed exposition. We voyeuristically watch to see how far and how long it takes for this cinematic chemical reaction mayhem to fizzle out. As the loner without a sidekick foil or pursuing antagonist, Whishaw is an island of reverberating eccentricity acting out a gutsy physical performance of exhausting anxiety. The movie is locked on him and we dare not look away.

If we do shake off the cobwebs to rediscover our grounded position, it’s because Surge is one of the shakiest cam movies you will ever see. Within the wiggles and wobbles, cinematographer Stuart Bentley (Black Mirror) and Karia execute enormous and unbroken takes that impressively and thrillingly stay right in Joseph’s face through obstacles of streets, alleys, and storefronts. While very effective for immersion, some scenes are overwhelming, creating an undoubtedly difficult viewing experience. 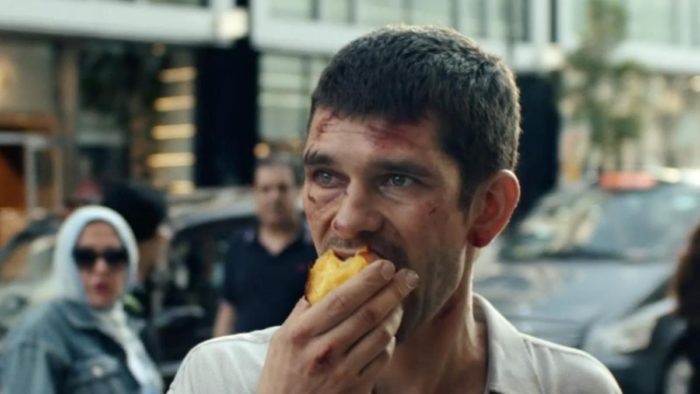 Ben Whishaw won a World Cinema Dramatic Special Jury Award for acting at the 2020 Sundance Film Festival, and he earned it with this dramatic departure from his usual roles. His surprising and frenetic dedication to this madness deserves the highest consideration for further accolades. As a completed concept of scripted chaos, the whole film also warrants award attention after being nominated for Sundance’s Grand Jury Prize in the World Cinema category.

Fancy Hollywood hands would take a story like Surge and bloat it for blockbuster aims. Some macho filmmaker would inject a sociopolitical platform to rile up bias, pile on more preposterous heights for a wow factor, and add ranting monologues every chance it would get to appease an actor or actress who took this kind of role wanting to show off. That kind of incarnation can rightfully drum up and inspire an audience, but some of its shine would feel superficial. A movie like that would shout about how dangerous it perceives itself to be rather than pulsate with true, unflinching volatility.

With that in mind, it is wonderful to see an independent film throw caution to the wind with a mind for edge over agenda. This is an observation of a character that snaps with little rhyme, reason, or recourse. Sometimes, the raw and unvarnished state of a matter is affecting enough that extra or immediate spin is unnecessary. Simply put, Surge and its Joseph are more petrifying when you cannot assign labels or explain them away with diagnoses. That is a maddening and riveting appeal to behold.