Evil S2E11, “I Is for IRS,” is a good reminder that Evil doesn’t always have to be scary. It can indeed be very scary, but it also is very skilled at being campy and just genuinely funny. It was pointed out on the Evil subreddit that the ditty being sung by Edward and Sheryl at the end of last week’s episode was in fact taken from Flight of the Conchords.

Sheryl has warmed up to whatever it is she was injected with last week, as the opening moments of “I Is for IRS” finds her returning to Leland multiple times to get the infusion, with each session resulting in an increasingly grotesque wound behind her right knee; it looks not unlike a needle wound from a drug addict. Sheryl looks surprisingly younger during this montage, and inserts of smooth legs and flowers suddenly springing to life point to the possibility of this substance being some sort of fountain of youth. Still, knowing a bit more about what the stuff is (formaldehyde, like in the song lyric?) doesn’t bring us much closer to understanding what exactly Leland is up to.

Massive kudos are owed to how this opening utilizes Andrew Bird’s “Fake Palindromes.” The entire song is mirrored by the cinematography of the episode, and the closing verses are mouthed by Sheryl as the narrative of the song is played out literally in the scene. And yes, she even drills a tiny hole into a guy’s head!

I’m immediately on board with this week’s initial hook: the IRS wants our heroes to help evaluate whether a new religious organization can be officially recognized as such for tax-exempt purposes. That organization? The New Ministry of Satan. “New Ministry?” Ben asks. “There’s an Old one?”

As a side note, if you haven’t seen it yet, I highly recommend the documentary Hail Satan?, which does a deep dive into the real-world organization The Satanic Temple (not to be confused with Church of Satan). The Satanic Temple, contrary to its name, is not a cult of Satan-worshiping, blood-drinking maniacs (in fact, they don’t believe in any Satan at all). It is, in simple terms, a group promoting betterment of oneself and society, freedom of religion, and subversion of the government’s tendency to fixate on a single religion as the driving moral ideology of governing. One of the Satanic Temple’s big objectives, which they have since accomplished, is receiving that tax-exempt status.

Everything about the editing and pacing of this scene is hilarious. The IRS representative’s name is Anita Iota, which is probably the most IRS-sounding name ever. As soon as Anita introduces herself as IRS, a loud thunderclap sounds and we cut to the pop-up book motif, with the hands manipulating the book recoiling in horror when the page turns to reveal tax documents. Anita proceeds to unironically profess her confidence that the Catholic Church uses “every penny of its substantial funds for altruistic purposes.” It’s great stuff. I’m also really loving Bishop Marx’s increased screentime with the trio—Peter Scolari enjoys some great chemistry with Colter, Herbers and Mandvi, and his reactions to some of the things they say and do just keep getting better. 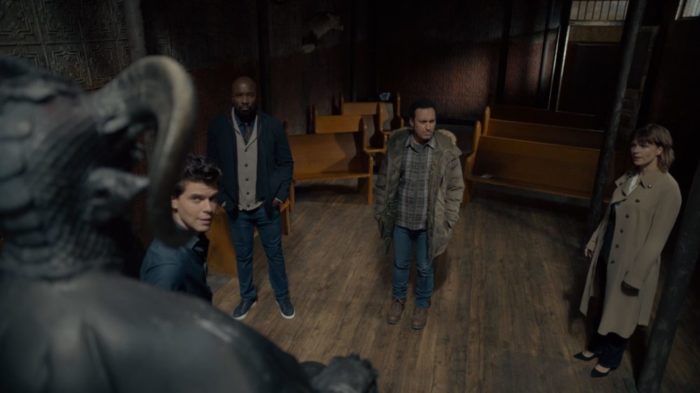 Anita Iota has come prepared with the four criteria with which the IRS evaluates religious organizations: The organization must operate exclusively for worship; it must not be geared to the financial benefit of one person; its purposes cannot be illegal; and it cannot influence legislation or politics. This is set to a montage that, for the fourth criteria, prominently shows photos of the 45th President. Bishop Marx admits that the criteria are more honored in the breach. The Kings are straight-up trolling now.

The New Ministry of Satan is pretty clearly a sham as soon as the trio visits it. Graham Lucian, their leader, has an interesting way of phrasing his belief in Satan: like Jesus does for David, Satan makes sense to Lucian, and describes the world to him. He also sells t-shirts for $35 on a $6 production cost and hosts an absurd worship service in the back of his dingy office. Lucian does take a liking to Kristen—as he tells her later, right before she has sex with him in the passenger seat of her car, he can see she’s not a believer—and he isn’t either. Of course, the New Ministry of Satan does not receive their tax exemption. In the best line of the episode, Ben remarks, “No matter how powerful Satan and God are, the IRS is stronger.” 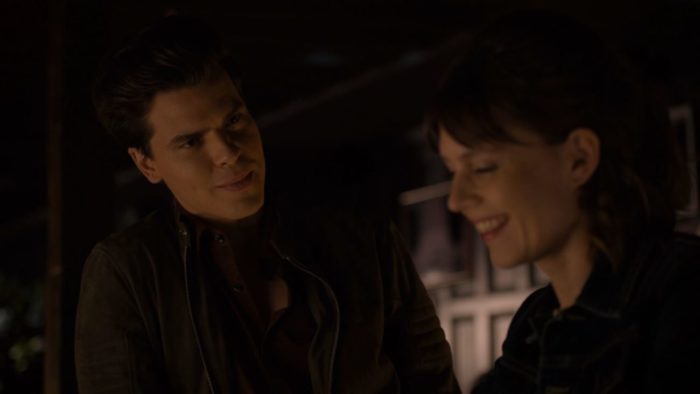 I kind of breezed past this little plot point of Kristen finally cheating on Andy, with this clown no less, but this is a huge deal. Later, during a reconciliation with Andy, he shares with her a Tibetan Buddhist ritual in which the two of them write a confession on a piece of paper, circle the name of someone they want protected, and then dip the papers in butter and toss them into a fire. Kristen, of course, writes her admission of cheating, circles both of their names, and tears the paper in half before tossing it into the fire.

Notice, however, that one of the pieces of papers doesn’t ignite because it falls a bit to the inner side of the fire pit. Which piece survived, and who’s going to find it? What did Andy write? I still don’t like the way he looks at Kristen—he’s suspicious but he’s also definitely hiding something. Also recall in Season 1 that Andy said a prayer exchanging his life for his daughter’s. I do not think Andy is going to survive past the end of this season.

On this week’s Kurt Alert, Kristen and Andy are actually in couples therapy with Dr. Kurt, and he’s back to seeming well-intentioned. However, it doesn’t end up being a fruitful conversation: Kristen refuses to actually deny she wants to sleep with David, and Andy likewise is acting pretty suspicious. She sees the djinn again, prompting Kurt to prescribe even more medication. When these backfire spectacularly, Kristen goes back to his office, blows up on him, and fires him—and once she leaves, Kurt picks up his phone and says, “We need to talk.” Kristen overhears this and returns, but Kurt claims it’s just his wife on the line. Odd time and context to call your wife, wouldn’t you say?

I love Leland’s response to the New Ministry of Satan. He calls it blasphemy. “These idiots don’t believe in Satan, they’re just co-opting the Devil to get press and piss off religious people.” He is legitimately upset at this, and the best part is he’s probably 100% right.

Speaking of Leland, we’re in the final nights of his exorcism, and this time, he doesn’t appear to be joking. He vomits black tar, kicks a priest clear across the room, and has multiple different voices coming from him—when he isn’t screaming in anguish. David believes that God is starting to take this exorcism seriously. Kristen, attending the exorcism at David’s request on the second night, is similarly troubled by the exorcism, and we get the second demon baby birth hallucination in as many seasons of Evil. It’s more than likely due to the medications that Kurt had prescribed, but this is as gnarly a scene as any so far in the show, as Kristen’s abdomen splits open and an organ falls out and starts screaming. Yay, drugs!

Leland is in a sorry state, and begs Sheryl to come over. She does, and draws for him a bath…of blood. Blood in jars with people’s names labeled on the outside. Leland specifically requests for “the two women from the airport.” Dude…just what is even going on in this show anymore? I love it. This very specific therapy does the trick for Leland, and he’s back to being a jackass on the final night of the exorcism. The exorcism still works, however—just not on Leland. Kristen is once again hiding in the bathroom, listening to the priest’s words. Kristen has established multiple times across the show, and particularly in this episode, that she is not a believer. But she hangs on everything said in the exorcism, and quietly answers each of the priest’s questions. 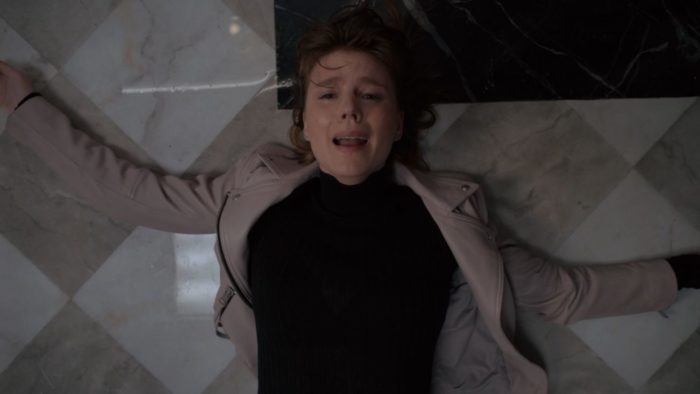 And it did seem to work! Kristen emerges from the bathroom almost glowing. She seems much more relaxed, happy, and ready to move forward with reconciliation with Andy. She later asks David if an exorcism can work on someone who doesn’t believe. David answers in the affirmative. This is another prickly mystery, as it can point to a couple of possibilities: a psychosomatic/placebo response to the exorcism in one of Kristen’s most vulnerable and darkest moments; or the definitive (as much as Evil can be) confirmation of God’s existence in this show. Either option goes in either direction as to whether or not Kristen was actually possessed. The final shot of the episode shows Leland cheerfully greeting a figure at the foot of his bed: Kristen’s djinn.

What an absolute trip this episode was, and I probably say that every week. I’m guessing (and hoping) that next week will be the episode that really blows the lid off of a lot of the mysteries so far in the season before the season finale opens up even more cans of worms. That being said, as Evil fans we have to accept the very real possibility that not all of this is going to be answered over the next two weeks. There will be some things that get kicked to the next season, but half of the fun is trying to out-maneuver the Kings and predict the unhinged creativity of this show. 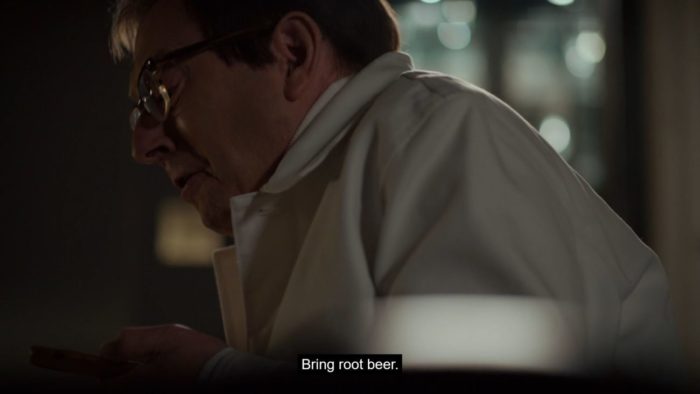