The Good Life is the newest title from Swery, creator of cult classic Deadly Premonition. Yukio Futatsugi, the creator of Panzer Dragoon led the development team on a project partly funded by Kickstarter. It’s been a few years since that campaign (spring 2018) with delays pushing it back from 2019, to 2020 and now finally releasing October 2021. It’s available for Windows via Steam, PlayStation 4, Xbox One and Nintendo Switch. I’m playing the Switch version here. Described as a “Daily life simulator x SWERISM,” it follows the same style of wacky characters and fun dialogue of Swery’s older titles and sadly suffers from the same flaws such as slowdown, stuttering and flat animations. Some of these problems I’m sure could be fixed with patches. These are my impressions after playing for a few hours.

Naomi is a grumpy reporter from New York City who’s relocated to a tiny town of Rainy Woods in England to investigate why it’s “the happiest town on Earth.” You’ll report back to your boss by submitting photos on a PC that runs a simplistic version of Instagram. Photos will give you likes and followers, while also awarding money for tasks: take a photo of someone drinking coffee, etc. 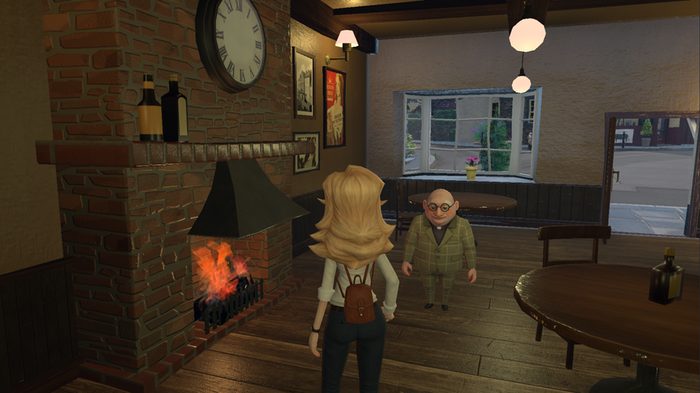 Side quests are the meat of life simulators and there’s a good variety here that have a dual purpose of getting to know the locals. There are plenty of fetch quests with a good variety using the animal and photography mechanics. One tiny complaint with this is that while multiple sidequests can be completed at once, some need to be set as the “main” quest for NPCs to discuss it with you, even if you’ve done the task. I was unsure about the requirements for one and went back and forth a few times without the dialogue triggering because of this.

Rainy Woods holds many secrets, one of which is revealed almost instantly; once a month the residents transform into either a dog or a cat. Naomi can change into either feline or canine forms, which have different abilities; Climbing up walls and hunting small prey for cats, sniffing out clues and barking for dogs. It’s much faster to run as a cat and they can jump fairly high so I changed often.

Lag and stuttering happens fairly often, especially when finishing a quest. I assume this is a transition from cutscene back to gameplay but it can be intense. The camera also tends to migrate until it’s looking down on Naomi’s head. I’d prefer a semi-fixed angle behind her or potentially a snap back to behind input.

While Naomi’s arbitrary reason for being here is for a job and to pay off her ridiculous debt, you’ll find yourself spending quite a pretty penny on all manner of items, unlocking shrines and gates to new areas, and food. I unfortunately found myself broke and stranded a few times. Fast travel between shrine statues costs 10 bucks. So take it from me: try to carry a decent amount of cash, maybe a hundred or so. Dying will cost you and it’s easy to slip up when you’re in animal form. A badger took my cat form down in two hits. 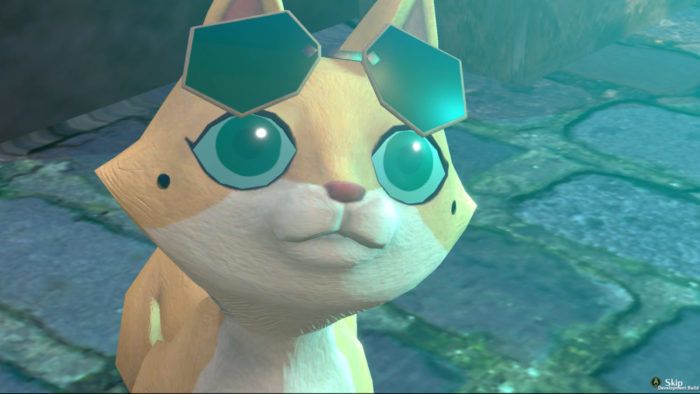 With the amount of mechanics, even as simple as planting vegetables, I wish there was a notebook or tutorial information section in the menu. Naomi has many status bars (health, tiredness, stamina, hunger…) that feel like a lot and the tutorial pop ups happen at strange times—it took several days for the hunger tutorial to happen for instance.

Tons of negative status effects are present, which is both funny and a little cumbersome. I picked up a statue for a quest and Naomi tore her back. I said to my SO “I hope sleeping will get rid of my back pain” and he astutely responded, “in my experience, it doesn’t.” He was right, I had to go to the combination human and animal hospital and pay 100 dollars to get treated. Pain meds can be purchased for around 25 dollars so at least I’m stocked up for next time.

This feels and looks like a GameCube game—and I don’t mean that in a negative way. Its nostalgic gameplay and cheerful characters are honestly comforting. I’ve already sunk 6 hours into the game and can see myself completing the whole thing; it’s very much my vibe (farming simulators and RPGs are two of my favourite genres!). It fits in well with Animal Crossing and other cozy life sims, and is well suited to wind down with at the end of the day.

I know I was a bit blunt here but I do genuinely really like The Good Life. If you like SWERY’s style, you’ll probably enjoy it. The price point is a little high so maybe wait for a sale if you’re unsure.

A Switch key for The Good Life was provided for review purposes.