This article contains major spoilers for Succession S3E4, “Lion in the Meadow”

They did it. Succession gave us the moment we had been waiting for and it surpassed all of my expectations. Succession S3E4, titled “Lion in the Meadow”, gave us the long awaited meeting between Kendall and his father, Logan. This was the first time they had been with each other since last season, when Logan thought he had talked his son into being his “blood sacrifice”—a family member to fall on the sword and go to prison for crimes committed by others. The wait was well worth it. As always, we’re about to get into heavy spoiler territory, so if you haven’t seen Succession S3E4 yet, you’ve been warned.

The setup to this episode was a simple one: Josh, a shareholder in the company, was requesting an audience with Logan and Kendall, to assess whether or not he wanted to continue to support them or back Sandy and Stewie in their ongoing attempt to wrestle control of the company away from Logan. Logan, with a firm grasp of the politics of the situation, knew he needed his son to attend the meeting. Kendall, not appreciating feeling ambushed by being summoned to a meeting with essentially all of Waystar’s upper management, initially declined the offer. It would take a second phone call from Frank, with Logan sitting there, to talk Kendall into attending.

Let’s pause there. Frank, who would be Number 1 with a bullet on everyone’s Most Likely to Flip From Team Logan to Team Kendall list, pulled a fast one on Kendall. Or did he? It sure seemed that way, or perhaps Logan is just savvy enough to know that out of everyone, Frank would be the most likely to get his son to change his mind. My first thought was that Frank was a no good turncoat but the more I think about it, the more likely it feels that Logan orchestrated the whole thing and Frank was simply doing what he was told. It worked though and soon, in an ultimate show of excessiveness, Logan and Kendall met at the same airport but flew in separate helicopters to an island that was probably only minutes away.

While this episode had several great subplots, it was here, with Logan, Kendall and Josh (played perfectly by Adrian Brody—please let him come back this season), that Succession S3E4 truly shined. The tension between father and son was real. The motivations of the third party (Josh) never quite clear. Did Logan put him up to this? Did Sandy and Stewie put him up to this? Was he trying to capitalize on the divide between father and son? It was never really clear what his intentions were, which added this subtle element of danger to the situation. Logan and Kendall wanted nothing to do with each other but had to play nice, yet they couldn’t resist getting in a few jabs along the way.

I had to watch “Lion in the Meadow” twice in back to back days to really study the body language and demeanor of both Kendall and Logan. There were many moments where Josh left their company, leaving them alone. Both father and son stared down, or looked around awkwardly. In these moments you could see that they both wanted to speak but the words couldn’t physically leave their lips. Their reactions were almost identical, doubling down on the season long theme of exactly how much these two have in common. These moments of silence were held almost painfully long. We, as the audience, had to endure the awkwardness that the characters were living through.

There was something truly heartbreaking about the silence. You could almost feel that Logan wanted to tell his son that he’s proud of him. That he has the killer instinct he previously thought all of his children lacked. That Kendall is giving him the fight of this life. You could equally feel that all Kendall wanted and has ever wanted, is his father’s approval. To feel that he’s worthy in his Dad’s eyes. In a cast full of amazing actors, Brian Cox and Jeremy Strong have always stood out and here, in Succession S3E4, they did some of their finest work saying nothing at all.

Of course, this situation needed that extra layer of danger and that’s where Josh came in to raise the stakes and set the stage for new wrinkles to arise. At Josh’s insistence, the three men hiked around the island to talk for part of the episode, and Logan was concerned from the moment the idea came up. Yet he couldn’t show weakness and despite his well documented health problems, hiked anyway, in an effort to not show weakness. As the hike progressed, it became clear that he was unwell. Kendall, all of his anger and hard feelings pushed to the side, was concerned for his father. Strong played it perfectly here, not overdoing Kendall’s concern and still showing visible anger towards his father, yet his instincts as a son would take over, caring for his elderly father.

This was a big week for Tom and he sure was due. While Tom has been in the mix all season, this was the first episode where he really got to have some moments and not just play second fiddle to his scene partners. The ongoing / never ending tension between Tom and his wife, Shiv, was on full display here but as is typically the case, his best scenes were with Greg. 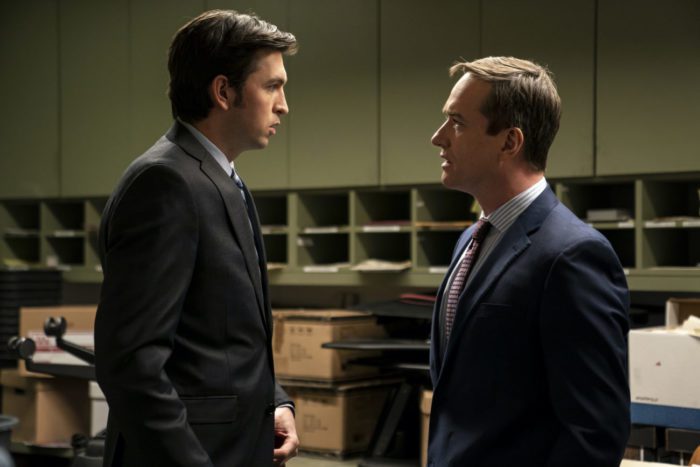 Tom’s mental state is certainly shaky. He’s afraid of going to prison. He lives in a constant state of fear that he’s going to lose his wife and the more powerful she gets, the stronger those fears grow. With Greg, there’s always been this sense that Tom is showing more of his true self. He enjoys being dominant over Greg, of course, but his guard is down more. It’s long been speculated that perhaps Tom has a sexual or romantic attraction to Greg, which this episode leaned into. Others have speculated that Tom views Greg similar to how he sees himself—as an outsider—and is drawn to him for those type of reasons.

Succession S3E4 almost seemed to take a big step forward with Tom’s ambiguous feelings towards Greg. In an episode where Shiv ordered him around, where he was reading up on what prison he would like to go to, and also discovered that he’s called “Terminal Tom” behind his back, Tom turned to Greg. Behind a closed door, he recounted a fictional story of a man who kills his wife and castrates his “slave boy” as he calls him, then marries the boy and forces him to dress as his deceased wife. Tom tells Greg that he would “so castrate and marry him” before trying to play wrestle Greg, an offer that Greg rejected.

Seeing Tom not only turn to Greg but come on so strong felt natural for the character. Greg is the true innocent of the show and Tom on some level seems to be attracted to that innocence. Perhaps Greg reminds him of himself before he became fully immersed in this world? As his life feels like it’s crumbling, turning to someone who is on the outside looking in appears to be a safety net of sorts for Tom.

I couldn’t help but make note of the fact that in the episode where Logan is finally around Kendall again, he lashes out at Shiv for her performance at work. Sure, Shiv probably needed to be reeled in some but the fact that she’s a Distant Number Two to her brother Kendall in Logan’s eyes was certainly noticed.

Roman finding “Tattoo Man”, a homeless man who the Brothers Roy paid to have Kendall’s initials tattooed on his forehead 15 years ago at Kendall’s bachelor party in New Orleans, was an interesting side plot. More than anything, it served to show Gerri’s level of influence over Roman and his trust of her. When Gerri told him to bury the photos and to think of the harm it could cause him as well, Roman took that to heart. When the knives attempt to get Gerri this season, Roman will be there to help her, guaranteed.

Seeing Greg play his hand in this episode was hysterically awkward yet also captivating. Of course Greg can’t do anything without being unintentionally funny, but he chose his career and the comfort that Logan can offer over Kendall and also being a part of his grandfather’s attempt to cause legal disruption within the family. Of course, I don’t think Ewan’s going away that easily. Call it a hunch but I don’t think Greg’s signature in this episode gets him off the hook from the firestorm he started by seeing an anti capitalist lawyer with his grandfather.

As we would learn in the closing moments of Succession S3E4, Josh decided to withdrawal his support from the Roys and back Sandy and Stewie, all right before the upcoming shareholders meeting. This leaves the family in a sticky situation. For Kendall and his father to kiss and make up might give them a shot at keeping control of the business within the family but is it too little, too late there? It’s hard to guess what Kendall’s next move might be, but after taking care of his elderly father and hearing Logan say some flattering things about him, one can’t help but wonder if Kendall is willing to “come home” and shift his conflict towards Shiv over who would be the next in line to succeed after Logan.

What do you think is going to happen next week? Drop us a line in the comments and help us keep the conversation going!