Did I ever tell you the one about the monkey and the hitman’s ghost?

If there’s one thing that Marvel has in abundance, it’s weird sh*t. Some of it has already hit the mainstream: Guardians of the Galaxy, Deadpool, Moon Knight and the like, but there’s still plenty of bizarreness for the media empire to dig around in and see what fun they can have. Enter Marvel’s Hit-Monkey. Originally conceived as one of four animated shows that would culminate in a crossover series called The Offenders, Hit-Monkey is, along with M.O.D.O.K,  one of only two shows that survived the Great Marvel Assimilation of 2019 when the television arm was folded into Marvel Entertainment—sadly, one of the shows that didn’t make it was a Howard the Duck series that sounds like it would have been an absolutely delightful time.

I’ll keep things simple: Hit-Monkey is not a particularly deep show, nor does it pretend to be. It’s a gleefully irreverent, off-the-rails joyride through one of the weirdest corners of Marvel’s massive universe and history that weaves a rich and colorful tapestry together from elements of revenge capers, buddy comedies, yakuza flicks and samurai films, with the whole thing filtered through the stylization of anime and the inherent ridiculousness of the story centering around the duo of a Japanese snow monkey and a dead American hitman. At no point does Hit-Monkey attempt to hide any of these influences, and in fact often does the complete opposite. Each episode feels like a self-imposed challenge by the writing team to see just how many tropes they can fit into each episode, pinballing between influences as the story sees fit.

A quick summary of the plot: Bryce, an American hitman, gets contracted out to conduct a political assassination in Japan on Ken Takahara, a candidate for Prime Minister running on a platform of anti-corruption and fighting the yakuza. But instead of payment, he gets left for dead by the military in order to serve as a scapegoat for the hit. He makes his way to a hot spring in the mountains where a tribe of snow monkeys lives, but he isn’t able to hide out for too long before the military tracks him down and finishes the job—but after death, his ghost appears to the last survivor of the monkey tribe. The duo makes their way back to Tokyo, where Monkey—yes, that’s what he’s called—starts killing his way through the Japanese underworld in order to find those responsible.

Meanwhile, Akiko, a political activist and relative of Takahara’s who had been working as his speechwriter, convinces her uncle Shinji to continue Ken’s campaign for Prime Minister in his nephew’s place, believing that their political rival’s campaign was responsible for ordering the assassination. She first crosses paths with Monkey when he finds himself in the middle of a yakuza shootout at Takahara’s funeral and helps her get to safety, with the two of them developing a bond that unfortunately leads to a tragic end. 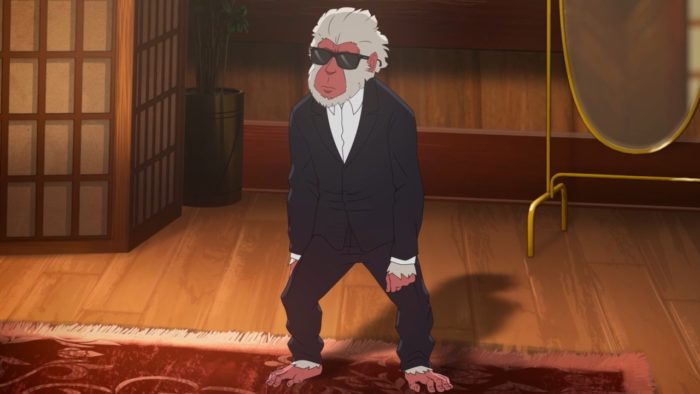 Finally, jaded Lieutenant Ito is assigned a new partner, rookie cop Haruka. When the two of them start investigating the wave of killings rippling through the Japanese underworld, they quickly find themselves on the trail of Monkey and Bryce, only for Ito’s death while protecting Haruka to lead her into aiding Monkey in his pursuit of vengeance.

The Friends style episode title joke might be overdone by now, but this really is a show where the episodes might as well have names like “The One Where They Go to a Casino and Struggle Against the Vices of the Human World,” “The One Where the Odd Couple Has a Big Blowout Fight But Realize They Truly Care About Each Other and Wind Up Strengthening Their Friendship,” and “The One With All the Soul-Searching Over Whether the Path of Revenge Is Worth All This Bloodshed and What A Life Of Violence Is Doing To Me as a Person Or In My Case as a Monkey.” The series follows a path anyone who’s had even a passing interest in any of the genres Hit-Monkey is influenced by will be quite familiar with, but the show keeps the energy going with an almost non-stop string of shootouts, betrayals, and wisecracks that ensure you’re never at risk of taking things too seriously.

The show’s cast, meanwhile, is a series of odd-couple pairings that is just about as genre fueled as the episodes are. There’s the lone survivor who’s out for revenge and his wisecracking, devil-may-care partner/mentor/friend. Then, there’s the jaded older cop with a drinking problem and an obsession with finding his partner’s killer and the bright-eyed, by-the-book rookie assigned as his new partner. Finally, there’s the young, idealistic political activist and the more cautious, more conservative candidate whose campaign she’s working on as both of them aim to carry on the legacy of their candidate—the target of Bryce’s final assassination. Filling out the cast is a colorful mix of yakuza thugs, aging martial arts masters, a couple of obscure Marvel characters, and Lady Bullseye—a scene-stealing femme fatale and rival assassin who I strongly suspect will gain a particularly intense following after her appearance here.

Speaking of the cast, the voice acting work for Hit-Monkey is particularly excellent. Jason Sudekis oozes with equal parts charm and smarm as Bryce, Olivia Munn nails Akiko’s passion and fiery streak, and George Takei continues to delight in everything he shows up in. There’s not a single weak spot to be found in this cast—even Monkey himself is excellently “voiced” by veteran voice actor Fred Tatasciore.

The point of all this is to say that while Hit-Monkey isn’t a show out to do anything necessarily new or groundbreaking, that isn’t necessarily bad. Sometimes, you want to watch something that challenges you or gives you a brand new perspective on life/yourself/the medium of television itself. And sometimes you just want to watch a downright ridiculous show about a Japanese snow monkey teaming up with the ghost of a hitman and killing his way through the Japanese underworld to avenge the death of his tribe. What Hit-Monkey might not have in originality, it more than makes up for with heart, stylishness, and execution to wind up being one of the most straightforwardly entertaining shows I’ve seen all year.

I don’t know if Marvel has any plans to release any more of these offbeat sorts of shows in the future, but if Hit-Monkey is anything to go by, we may be looking at even more off-the-wall Marvel television before too long.