So naturally, it’s the perfect time of the year to jump right into one of the most notoriously fickle and divisive fandoms of all time: Star Wars, specifically the Star Wars film with the dubious distinction of being the first Star Wars film to classify as a box office bomb: Solo: A Star Wars Story.

Why am I talking about Solo? Why am I thinking about Solo? Truth be told, it’s on a very long list of films I’ve been wanting to talk about for quite some time, and after seeing a Facebook post talking about the movie I decided it was the right time to talk about my disappointment in this film and what it could have been. Solo isn’t the most divisive film in the Star Wars trilogy—that honor goes to The Last Jedi or The Rise of Skywalker, entirely dependent on who you asked—but to me at least, it’s the single most disappointing one, especially once you realize how good of a film it could have been once you get past its central, fatal flaw.

The problem I have with Solo can actually be summed up in a fairly easy way: without Googling it, I could not tell you the name of the guy who played Han Solo in the Han Solo movie. Off the top of my head, all I could tell you was that it wasn’t Harrison Ford. It’s not that Alden Ehrenreich (I Googled it) gives a particularly bad performance, it’s just so unmemorable that it almost entirely disappears from your memory about five minutes after the credits roll.

I could tell you just about everyone else who’s there: Paul Bettany, Donald Glover, Emilia Clarke, Phoebe Waller-Bridge, Woody Harrelson—it’s an impressive cast. But the rest of the cast is memorable not just because they’re all fairly big names in the acting world, but because each of their characters outshines the lead with relative ease. Solo is a movie that is filled with interesting and memorable characters—and continually forces them into the background of a story centered around its least interesting one.

Yes, I said it: Han Solo is not a particularly interesting character, nor is he even a fairly deep one. The appeal of Han Solo comes entirely down to the cool factor: he’s the effortlessly cool, morally ambiguous, swashbuckling, smuggling, rogue type who grows into a bonafide hero over the course of the original trilogy, and most of that effortless cool came entirely from being played by Harrison Ford—and in spite of George Lucas’ efforts to reduce said moral ambiguity in subsequent remasters of the original trilogy (if the phrase “Han shot first” doesn’t mean anything to you, then oh boy are you in for a treat).

Han’s defining moment in the OG trilogy is the “I know” exchange with Leia, and it’s a moment that capitalizes entirely on this: Han has been captured, is about to undergo a painful cryogenic freeze, and still manages to be the coolest guy in the room. He is, I cannot state this enough, a cool guy. But he’s not one who’s really begging for any sort of in-depth exploration or origin story, and it’s clear that a mostly unnecessary origin story isn’t enough to carry the film.

Not that Solo is an origin story, despite being billed as such. Let me explain: upon doing further research for Netflix’s Cowboy Bebop adaptation, I’ve been made aware of the concept of “Buffy Speak” or “Whedonspeak” as an almost omnipresent trope in modern-day screenwriting. Now, one of the cornerstones of Whedonspeak is how characters will speak almost entirely in quips and asides instead of using actual dialogue, more focused on making the audience laugh than on developing the characters or giving us any sort of insight into their motivations or history.

Solo decides to take a somewhat unique step of applying this principle to the story. It’s a collection of events that are meant to be cool rather than give us any real insight into who Han is or how he got to where we first met him in A New Hope. These aren’t so much “story beats” as they are “things that sounded cool when Harrison Ford said them in the ’70s.” Even the origin of Han’s name is basically a quip: an Imperial officer asks him for his family name, Han says he’s alone, so the officer puts “Solo” as his surname.

The two most memorable Han-centric moments in the film are two of these: the Kessel Run and Han winning the Millennium Falcon from Lando. They’re both things that were mentioned by Ford-as-Solo back in the original trilogy—and notably, neither of them gives us any real insight into Han that we didn’t already know. If anything, the film’s story feels more like a “greatest hits” album built around the story of Han’s first space heist.

Now, I specify the two most memorable “Han-centric” moments for the other side of the equation that I mentioned earlier: everyone else in Solo is an interesting and memorable character, and had the film been centered upon one of their stories it almost certainly could have been a sleeper hit in a similar way to what was accomplished with Rogue One. Let’s do a rundown.

First, there’s Emilia Clarke’s Qi’ra. We first meet her in the opening sequence as a childhood friend and likely romantic interest for Han. The two of them are trying to escape a gang, but she gets captured before the two of them can board the transport they’ve bribed an officer to get passage on, leading to Han joining the Imperial Navy to be able to come back for her.

When the two of them reunite, she’s now the top lieutenant for Paul Bettany’s Vos, a crime boss in the Crimson Dawn syndicate. From the get-go, her story seems much more intriguing than Han’s: how did she get involved with the syndicate? What else has she done just to try and survive? And at the end, when we find out that Vos’ superior was none other than Darth Maul, does she know anything of Maul’s history, or even of the Force? The film even ends with her having seemingly taken Vos’ place in the Syndicate, and a story about either her backstory or her future would have the potential to be an intriguing entry in the Star Wars canon.

Next, we have Han’s mentor of sorts, Woody Harrelson’s Tobias Beckett. Beckett is sort of Han’s version of Long John Silver, showing Han the ins and outs of the smuggling business—and teaching him the more important, more difficult lesson about being cautious of who you trust, even when it’s someone you’ve come to rely on. Harrelson does an excellent job of selling us on his character being a seasoned veteran of the shady business Han winds up getting pulled into, and his eventual betrayal of Han feels natural for who the film establishes him to be.

Then, there’s fan-favorite character Lando Calrissian, played this time around by Donald Glover. Here, we see Lando before he went (mostly) legitimate as the administrator of Cloud City and instead as how Han remembered him back in The Empire Strikes Back. He’s an even cooler, more successful scoundrel than Han is, and Donald Glover arguably does Lando better than Billy Dee Williams—Disney execs certainly seem to agree, having ordered a Lando-centered Disney+ series.

Lando is accompanied by L3-37, the latest in a long line of sassy droid companions, and even she gets arguably a more interesting arc than Han. After she arrives on Kessel with Lando and the rest of the crew, she winds up inspiring the slaves working in Kessel’s mines to revolt, and after being fatally wounded in the chaos has her consciousness and navigation data uploaded into the Millenium Falcon. There’s even a somewhat romantic subtext to her relationship with Lando, giving us an interesting wrinkle to both Lando as a person and to our concept of the relationships between droids and humans.

A story about any one of these characters would have made for, if not a better movie than Solo, then certainly a far more intriguing one, and the film shows some genuine brilliance in the moments where these characters are given a spotlight. But sadly they’re stuck in a film that’s not only centered around its weakest link, but one that feels confined to the boundaries of the original Star Wars movies. All the big moments feel like they bend over backwards to be tied to the original films—even the ending finds Han and Chewie making their way to Tatooine to meet an “unknown” crime lord putting together a big, profitable job that Beckett had mentioned, one who we know fully well is Jabba the Hutt. 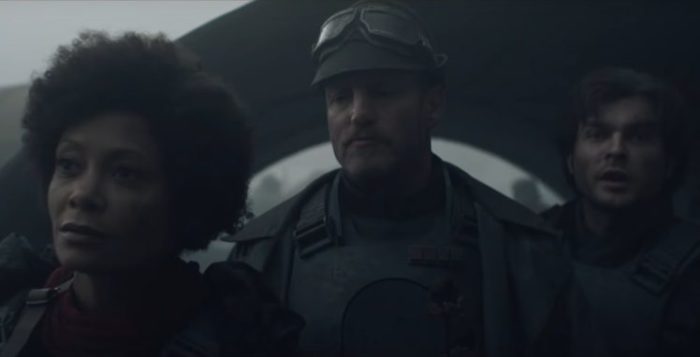 It’s a phenomenon that’s unfortunately prevalent throughout many modern shows/movies. The best way I’ve heard it described is as  “Anakin Skywalker built C-3P0 Syndrome”—the idea that everything, no matter how small, has to connect to some sort of overarching narrative or larger place in the world rather than being allowed to simply exist organically and independently of other elements. It’s a good idea, and it’s even been used to excellent effect in previous Star Wars films! Darth Vader being Luke’s father instantly gave their conflict a new, meaningful subtext that elevated it above a simple good/evil conflict. But trying to make everything fit together in some way severely limits where a story can go and leaves it weighed down.

Unfortunately, “weighed down” winds up being the ultimate fate of Solo. It’s a safe story about an infamously rebellious character. It has a cast of interesting characters that are constantly focused on its most boring one. It’s framed as an origin story, but it winds up playing like a greatest hits list of Harrison Ford one-liners. It’s a film that, like far too many of the other films from Disney’s Star Wars era, is so held back by its legacy that it’s unable to truly soar.