The following contains spoilers for The Expanse S6E2, “The Azure Dragon” (written by Daniel Abraham & Ty Franck and directed by Jeff Woolnough) but no book spoilers

Towards the end of The Expanse S6E2, Avasarala asks Monica to help with a kind of documentary project, meant to maybe curry some sympathy with some Belters somewhere somehow—just enough to make them second guess their desire to kill Inners. Monica, of course, demurs, insisting that she isn’t interested in creating propaganda, but by the end of the scene it feels like she is going to do it and has been brought along by Avasarala’s guilt trip.

But the idea that she isn’t asking Monica to lie but to show the truth is (or should be) besides the point. The problem with propaganda isn’t that it is mendacious but rather that it is precisely based in the facts, merely presenting them in a curated way to bolster a cause. The most effective propaganda is, indeed, true from a certain point of view—the whole purpose is in bringing others to that point of view.

This is important because if we object to propaganda as such, we have to be clear that it is bias and the framing of reality that is at issue. It’s a question about the motive and intention with which facts are presented, and not so much about the facts themselves. A journalistic ethos strives for a disinterested, or neutral, point of view, which may be unachievable, but which certainly isn’t achieved by giving equal play to two biased sides, much less by choosing one, as Avasarala is asking Monica to do here.

Of course, it’s not clear that most people do object to propaganda as such; they perhaps only object to it on the other side. Regardless, the scene left a bad taste in my mouth.

Ironically, it occurs to me the extent to which this is because The Expanse itself has not done what Avasarala wants to do—humanize the people of Earth. I suppose that we are supposed to care because we as viewers are from Earth and so on, but we’ve seen very little of what the world has become over the course of the show to this point, and what we have seen seems to indicate that Earth is run by out of touch bourgeois neoliberals while everyday people are ignored and exploited.

It’s hard to see how some profile pieces are going to make Belters more sympathetic to Earthers given that if these are shown in The Expanse I feel like I’m bound to find them cheesy, like segments about finding a lost dog on the local news. There is virtually no way Avasarala’s plan could work, and she seems all the more out of touch with the churn for having suggested it.

What’s bothering me is that though the elements of this critique of the elites are there in The Expanse, I’m not convinced the writers realize that Avasarala is one of them. She’s great to be sure, but this is a story about class warfare now and it makes me uneasy to feel as though I am expected to be in solidarity with those whose status depends on exploitation.

The Expanse had a chance in Season 5 to explore the difficulty of being in solidarity with the Belt but against Marco, but it largely punted on that question. Does Naomi continue to feel any qualms about what the Roci is doing? If so, she only pays them some light lip service. Drummer remains in a position where this dynamic could be more fruitfully explored, and S6E2 gestures somewhat in that direction, but for the most part it seems as though the conclusion is that Marco is so very, very bad we can’t bother thinking about the legitimacy of the grievances he represents until he is out of the way. Which is boring but more importantly not how politics works.

This leaves me rooting for Inaros. Not in a reflective way, mind you—I can’t support killing millions of people indiscriminately—but in my gut that’s how I felt at the end of S6E2, as Marco and Rosenfeld talked about being ready for the fight to come. And surely this is paralleled by the untold numbers of Belters aligned with the Free Navy—would they vote for such savage violence? Perhaps not, but this is the only game in town.

Unfortunately, Marco is a narcissistic maniac who isn’t even serving the interests of the Belt so much as using this cover to divert resources to Medina. I’m not sure what his long game is there, if he plans to take up the purpose the Mormons once had for that ship and leave the solar system, or what. Probably it’s just his version of a palace with golden toilets. Very disappointing.

Filip is worse. He killed his friend for no good reason, isn’t getting in trouble for that, and effectively seems to be succeeding at deluding himself out of remorse. That may come back to bite him, of course. But I fear it’s actually going to come back and bite his father.

It’s not that I actually want them to win, to be clear, it’s that I want The Expanse to actually grapple with the political questions it has opened. But I don’t think it will. So I hope the whole thing is resolved next week and we move on.

That possibility is set up in “The Azure Dragon,” as our friends on the Rocinante seize the titular ship and secure Marco’s plans for upcoming asteroid attacks. A big battle is thus on the horizon. (And Clarissa is happy Holden called her part of the crew, even if it was in the process of chewing her out.) 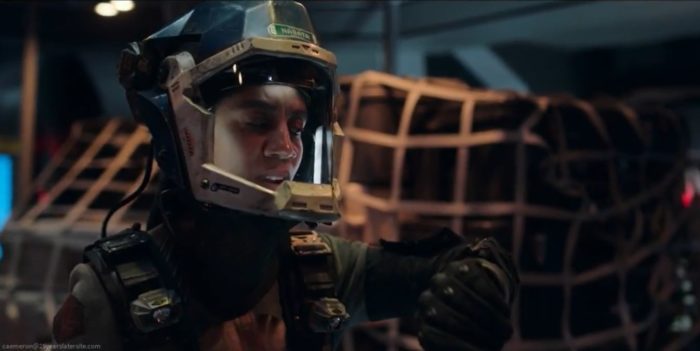 S6E1 and S6E2 have both opened with scenes on Laconia, and the action has proceeded quite slowly. This week the girl got sad a bird had died and the animal we saw poking its head out at her last week stole the corpse. Also, her parents are going to attend a meeting about whatever is being built in orbit.

I can’t help but worry given the structure of these vignettes to open each episode that The Expanse is slowly laying groundwork here for a future storyline that will never come. That is, it would make sense to me if there is no payoff to these scenes in Season 6, but I do hope I’m wrong about that. I may be in the minority of Expanse fans on this one, but I’d like a feeling of finality at the end of this season. I just don’t think I’m going to get it.

Does this storyline even relate to the protomolecule? It’s possible that I jumped to conclusions last week in thinking that it did. In the most intriguing scene of S6E2, Holden and Bobbie discuss some Martian ships that disappeared going through the Ring, including the Barkeith. So whatever happened to that ship at the end of S5E10 was indeed something weird and noteworthy, though we’re still left to wonder what exactly happened to it.

Maybe if Marco is dispensed with next week, we’ll get to find out. See you then.

More From: The Expanse