With four shows under their belt, Marvel’s expansion into Disney+ is now feeling more and more like an integral part of the bigger Marvel Cinematic Universe, and none feels more essential then the recently wrapped up season of Hawkeye.

Hawkeye feels like the MCU’s equivalent of comfort food—a rich, filling, yet refreshingly low stakes meal to balance out the almost operatic heights of films like Avengers: Endgame and Spider-Man: No Way Home. But more importantly, it feels like the MCU’s passing of the torch, from the first generation of heroes to the second one. As much as it’s about Clint Barton’s life after Endgame, it’s arguably more about the trio of future Avengers that it sets up: Kate Bishop, Maya Lopez, and Yelena Belova.

At the heart of Hawkeye is, well, Hawkeye—both of them. Clint Barton is a man bearing the weight of many years, both emotional and physical. He’s haunted by both the death of Natasha Romanoff in Avengers: Endgame and by the five years he spent as the Ronin, the years of being in close proximity to many, many explosions have left him needing a hearing aid, and his primary motivation during the events of the show is just to get home to his family for Christmas.

These three details define much of Clint’s arc in Hawkeye—even if he comes across as less of a tortured antihero and more of a grumpy old man reluctantly taking an energetic up-and-comer under his wing—and solidify the human element that sets him apart from his fellow Avengers. He’s the most relatable one, an otherwise ordinary guy who holds his own with super soldiers, billionaire geniuses, and literal gods, and it’s what Kate believes makes him the most uniquely inspiring Avenger. He also feels somewhat like a man out of time, or like the last left of the old guard. He’s one of only two of the original Avengers still alive and on Earth, and there’s a sense in which he’s not quite easy with this new world that he played a significant role in shaping. 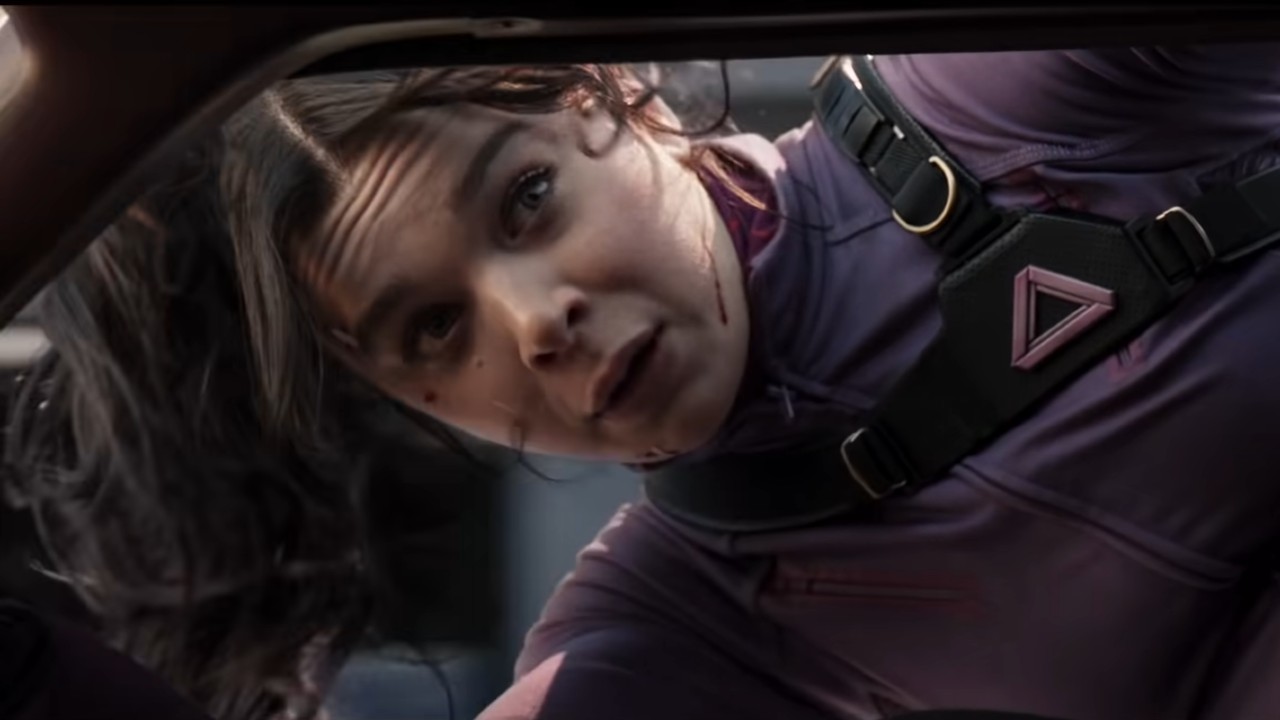 Kate Bishop, meanwhile, is the young, overconfident one who’s spent years idolizing Hawkeye and wanting to follow in his footsteps, having seen him in action when she was a teenager during the Battle of New York in The Avengers. Kate finds herself in over her head from the first moment we meet her, and when she puts on the Ronin suit to escape from a black market auction it leads to the first meeting between her and Clint.

Their dynamic has a very Batman and Robin feel to it, with Clint reluctantly showing her the tricks of the trade while she tries to both prove herself and help improve Clint’s image. But Kate quickly runs into the real consequences and danger of the vigilante life, coming across a pair of dangerous threats—well, threats for now, but likely future allies.

First, there’s Yelena Belova, previously seen earlier this year in Black Widow. She returns with her own agenda: avenging Natasha’s death by killing the person she thinks is responsible: Clint. Her chemistry with Kate is one of the highlights of the show’s second half—the pair of them bond over a pot of mac and cheese, and later on, they can’t help but compliment one another on their respective fighting techniques even in the middle of a showdown. Her storyline even includes the most tangible portrayal of how the Blip felt to those involved: she literally walked into a bathroom after an argument and walked out five years into the future—and to hear that her sister had died.

Keeping with the low stakes feel of the show, Yelena’s vendetta against Clint gets resolved after the two of them have a heart-to-heart about what Natasha meant to both of them (in the middle of a one-on-one brawl of course) and the show ends with her feeling firmly in the hero camp for wherever the MCU takes her next.

Finally, there’s Maya Lopez, better known as Echo—and already slated to star in an upcoming Disney+ series of her own. When we first meet Maya she’s heading up the Tracksuit Mafia—working for Kingpin, as we come to find out, making his MCU debut right on time with Matt Murdock’s introduction in Spider-Man: No Way Home—and when the Ronin suit reappears it reignites her vendetta with the vigilante, who she blames for her father’s death.

After a confrontation with Clint in the guise of Ronin once again, she winds up turning on Kingpin and leaving the organization behind. We’ll get more of her story in the upcoming Echo series, but she leaves a great first impression in Hawkeye. Special credit should be given to the show-runners for casting a deaf actress to play the character, and for her disability to feel like an essential part of her character without defining her or feeling like a detriment. It’s another step forward for diversity in the MCU, especially seeing a character as intimidating as Vincent D’Onofrio’s Kingpin using sign language to properly communicate with her.

But even with everything going on, Hawkeye never feels like a show where anything is meant to be taken too seriously. Between the involvement of a group of local LARPers, the cheesy Broadway musical based—in the loosest sense of the word—on the life of Steve Rogers, and Hawkeye’s almost cartoonish arsenal of trick arrows, there’s a lighthearted feel throughout the majority of the show, even during the murder mystery. It does mean that some of the show’s more serious storylines get wrapped up arguably a little too cleanly—it feels like Clint gets to basically wipe his hands clean of the Ronin after the suit has been retrieved and subsequently destroyed—but it generally doesn’t detract from the almost Home Alone style vibe of the show. Even the initial detective story and Kate’s family drama never feel like anything too serious.

Finally, Hawkeye‘s from-the-ground perspective is also a refreshing change of pace from the rest of the MCU—all of the Marvel Netflix shows thrived in the feeling of each hero protecting their own neighborhood rather than getting involved in world/space/time-spanning threats to existence, but the MCU has had a tendency to skew towards the overblown and operatic side of superhero stories. It really sells the Universe part of the Marvel Cinematic Universe: the impact of previous films is felt in ways both big and small, whether its a plaque commemorating where the Avengers first assembled in New York, the guilt of previous films that hangs over Clint, or Kate’s backstory of how much her life was shaped by the Battle of New York. While it’s not as big a crossover as something like The Avengers, it does a much better job of feeling like an entire cinematic world, not just a series of connected films.

Hawkeye pulls off an impressive balancing act, never taking itself too seriously, while at the same time giving us plenty of setup for the future of the MCU. It’s arguably the ideal show for the holiday season, but at the same time it feels like a crucial piece of Marvel’s future.