The following contains spoilers for the Season 2 finale of Euphoria, S2E8, “All My Life, My Heart Has Yearned for a Thing I Cannot Name” (written and directed by Sam Levinson)

It’s no surprise if Euphoria is the most talked-about show on Twitter, and not just because of how it takes over my feed every week. Never has there been a TV show that has made me want to holler at my screen with friends in the way that Euphoria Season 2 has. It virtually demands to be enjoyed communally, even if the community in question is just an imagined one in your head.

In this regard, the Season 2 finale, “All My Life, My Heart Has Yearned for a Thing I Cannot Name,” delivers in spades. Cassie is (literally!) fuming after the events of “The Theater and Its Double” with the closing shot of last week’s episode repeating in S2E8 before being carried forward. She storms the stage. Operatic music plays. She monologues. Lexi cowers. Maddy finally decides to take action, fighting Cassie into the halls. It’s a riot! And I don’t just mean literally, but also in the idiomatic sense. The whole thing is just a ton of fun.

I don’t know whose side you’re on in all of this or anything like that, but I think that’s not the point. I’ll admit to having struggled a bit to figure out how to watch Euphoria, as it has felt like a mixed bag to me since the very beginning, but with the Season 2 finale I think I have finally sorted out what my problem has been and why—everything in Euphoria is aesthetic.

Emotions, feelings, interpersonal drama, struggles with addiction, existential crises, even morality—all of these are played in Euphoria for aesthetic effect, like different colors on a palette that is painted from week to week. It’s a mistake to get sucked into the drama because that is to take the point of Euphoria as existing outside of it, as though we could pass judgment on those who are a part of the drama. No, this is art for art’s sake, in the tradition of Aestheticism, and interpretations that move beyond the art risk betraying it.

This is the deeper problem for me because it is my general move in writing on TV to interpret it and look for a movement of thought that kicks off from it in one way or another. This too is something of a mistake in Euphoria (which I may or may not be making right this very moment). It’s not that we can’t fruitfully think about the show; it’s a question of how we think about it, and all over the place in the world, it seems precisely that people are looking for some kind of moral of the story, or are worried about the show corrupting the youth, or are lamenting how unrealistic it is in one way or another.

Certainly it is unrealistic for a high school student like Lexi to be able to put on a play like “Our Life” at school! Who cares? The effect of the play serves “All My Life, My Heart Has Yearned for a Thing I Cannot Name” well even if it didn’t work well in “The Theater and Its Double.” Euphoria juxtaposes scenes from the performance with scenes in real life, sometimes breaking down the wall between the two or putting things out of their proper temporal order (as when we see Rue thanking Lexi for the play in a moment clearly after the performance and then go back to a shared moment between Lexi and Jade within the performance).

The whole thing works, but insofar as it works it is entirely at the level of one affect leading to another. It’s like a kind of tone poem, or protracted music video, and while I lament that Euphoria doesn’t do a better job of exploiting its form as episodic TV, the better comparisons might lie outside of the form altogether.

It’s not a Gesamtkunstwerk for God’s sake—there are better 19th-century reference points than Wagner, whose very idea of a total work of art actually included those things I am suggesting Euphoria excludes (a moral of the story, etc.)—but its beats aren’t linear or logical either.

This sometimes (or often, even) means that Euphoria is a bit of a mess. The links between scenes and moments are not so much rational as affective, and certainly the show can fall in love with its own affectations.

Elliot’s song in S2E8 is simply too long. It’s moving at first but begins to drag. The emotion leaks out of the scene. Just a little bit longer and we would have started to laugh, but thankfully it ends just in time for Rue’s response to keep us somewhere in the vicinity of what we had just been feeling.

Shots like the aforementioned one of Cassie standing in a door window frame begin to feel exorbitant. Her anger is writ so large that the operatic score feels totally appropriate. I think it works, but it’s right on the line. Maybe some found it ridiculous (because it really sort of is).

But my biggest complaint in Euphoria S2E8 along these lines (if these are complaints) is in the shootout at Fezco’s place, which equally pushes on so long it moves from intense to a weird kind of middle space that is no longer filled with tension but instead seems to be luxuriating in the violence.

If this disappoints me, it is because I truly care about Fezco, but again Euphoria isn’t so much interested in evoking an emotional response as it is in provoking an aesthetic appreciation of that emotional response. We don’t see Lexi learn about why Fez missed her play in S2E8 because that’s not a part of this episode’s palette of affects—it’s not an emotion Euphoria wants to paint with in the Season 2 finale. It may or may not be picked up in the Season 3 premiere, but I wouldn’t count on it.

The way things go down is tragic, with Ashtray getting a little too excited and murdery yet again, this time vis-à-vis Custer, which is a particular problem given that Custer has been collaborating with the police. But by the time a little red dot is moving upwards on Ash’s body, we’re sucked into an appreciation of the movement of the dot, and the sound of his thumping body that occurs offscreen, more than we are moved to tears. 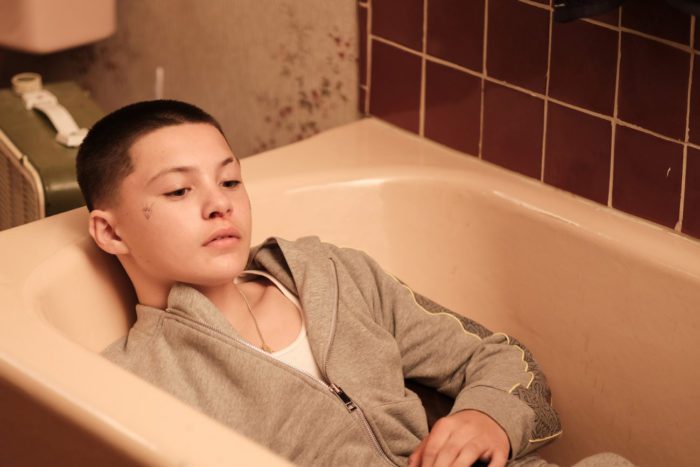 The no-knock raid is juxtaposed with the police calmly arresting Cal, but you’d really have to read into things to claim there is a political message about cops in this episode. And there are tears in S2E8—elicited from the viewer, I mean—they are just elsewhere, as when Rue and Lexi talk about their fathers.

All My Life, My Heart Has Yearned for a Thing I Cannot Name

Rue forgives Elliot for snitching but says Jules will take a bit longer. As S2E8 ends, the two share a moment in the theater after Lexi’s play, and Rue’s monologue kicks in to tell us how she views Jules as her first love. Which is all well and good, and indeed the Season 2 finale provides enough resolution that the series could end right here.

Try to appreciate how it feels.