Much-adored by fans of the show, Rupert Giles is one of the most influential characters in Buffy the Vampire Slayer. Uptight Watcher, father figure, socially-awkward librarian, ex-rebel with a dark past—the man contains many facets. Anthony Head’s endearing yet varied portrayal of the character completes him. It’s easy to go on about what makes Giles so great, but what I really want to do here is explore the specific moments throughout Buffy that showcase his excellence. He deserves the intricate attention!

With the arrival of Ethan Rayne, this episode brings our first insight into Giles’ backstory. We don’t get to find out details until ‘The Dark Age’ two episodes later, but we see a hint of darkness in Giles here. When he finds out Ethan is back and putting people in danger, he forces him to break his spell and leave town by beating him up. Seeing Giles use physical violence is extremely rare, so the scene has an impact. His chemistry with Ethan is off the charts as well; forget ex-friends, the homoerotic tension between them has more ex-boyfriends energy. It’s nice to see Giles get his moment separate from the group!

‘Innocence’ (S2E14) – Conversation with Buffy after she sleeps with Angel

After the whirlwind that is the immediate aftermath of Buffy losing her virginity to Angel, things settle enough for a heart-to-heart with Giles. As he drops her off at her house, Buffy self-deprecatingly says, “You must be so disappointed in me.” It’s set up like a situation where a dad is about to berate his teenage daughter for having sex, but this isn’t the case. Instead, Giles tells her, “All you will get from me is my support. And my respect.” What a lovely subversion of the overprotective strict dad trope. We love to see good parenting!

Of course, it’s upsetting to see Giles getting ruthlessly tortured by a villain as nasty as Angelus. However, he does get his moment amongst the pain. Baiting Angelus into thinking he’s going to reveal how to awaken Acathla, Giles tells him, “You must perform the ritual… in a tutu.” And then proceeds to call Angelus a pillock. As well as the comedic juxtaposition of a stuffy British librarian losing his cool and swearing, Giles’ retort shows his refusal to back down. He’d rather endure extreme physical and psychological pain than put anyone in danger. It’s impossible not to cheer him on while watching.

A rare comedic moment in an overwhelming and frustrating episode sees Giles speedily driving to the Summers’ house to inform everyone that an object there is causing the dead to come to life and attack. The object in question is a Nigerian mask that Joyce attained from a shipment to the gallery she works at, and decided to hang up in her house. Mimicking Joyce, Giles sarcastically says, “Do you like my mask? Isn’t it pretty? It raises the dead!” before an eye-roll comment, “Americans.” As well as being a well-needed humorous moment (and Giles sarcasm is the best), it’s also a valid point about white westerners stealing a culturally significant artefact from Africa purely for aesthetic purposes.

Attempting to pin down one iconic Giles moment in this episode is too much of a struggle. Adult-sixteen-year-old Giles is a delight! The rolled-up sleeves and shirt tied around the waist, the attitude, the smoking, the flirting, the swearing, the rebellion…the list goes on. To name some favourites, though, every scene with Joyce is golden. The two of them sitting on Giles’ living room floor, smoking and listening to ‘Tales of Brave Ulysses’ by Cream as Giles rocks out is such a humorous yet intimately sweet moment. (I’ve gotta mention the callback to this in ‘Forever’, after Joyce’s passing, when Giles sits silently with a drink listening to the song. It’s a beautiful moment, yet utterly heartbreaking.) Giles breaking into a shop to steal a coat for Joyce, then knocking out a cop after taunting him with, “Oooh, copper’s got a gun!” is unforgettable too.

It’s endlessly amusing seeing Buffy have to parent him for once. Can’t forget Giles telling her to “sod off”! Even without his inhibitions, Giles can’t fight, but he revels in the violence by doing a little jump and punching the air after Buffy hits the bad guy. You can tell how much fun Anthony Head had the whole way through the episode.

For gloating purposes, Big Bad Mayor Wilkins enters the school library before the final battle, face-to-face with his opponents. After Buffy insults him, the Mayor turns to Giles and says, “That’s one spunky little girl you’ve raised. I’m gonna eat her.” Without a moment’s hesitation, Giles thrusts a sword through his chest. Since the Mayor is immortal/invulnerable, it does no damage, but it throws him off-balance for a second. I love seeing Giles actually deal out an attack on a villain, especially so out of the blue. Instantly lashing out after one single threat towards Buffy is oddly wholesome. Let’s not neglect the fact that he stabbed a Big Bad, just like that. Go off!

Thanks to good old Ethan Rayne, Giles gets turned into a Fyarl demon for an episode, in a hilarious turn of events. Although the circumstances are objectively frightening, Giles uses it to his advantage and has some fun with it. Specifically, he exits Spike’s car (in an unlikely alliance) to chase Maggie Walsh down the street and scare her. Since Maggie insulted his parenting skills earlier in the episode, and is just an unlikeable character in general, seeing Giles get his own back is particularly cathartic as well as amusing. Petty Giles is the best Giles.

One of the best additions to Giles’ character in Season 4 is actually seeing him play guitar. We know he used to be in a rock band in his early 20s (as was Anthony Head himself in the 1980s), so it’s a nice continuation. In this episode, Giles is playing a low-key gig at the coffee bar, singing and strumming ‘Behind Blue Eyes’ by The Who. All the Scoobies are so shocked and amazed by this, they simply stand there staring, Willow and Anya with their mouths hanging open. Since when did Giles get cool?! His little earring as well… He is truly stunning.

There’s another amusing guitar moment a couple of episodes later. In ‘The Yoko Factor’, Giles is practising ‘Free Bird’ by Lynyrd Skynyrd when Spike walks in, startling him. They’re such a fab comedy duo.

In response to Spike’s manipulations that imply he’s obsolete, Giles starts drinking. It’s actually pretty sad, when you think about it. But equally, Giles breaking his stoic persona is always fun to watch. While the Scoobies have a serious argument, Giles is stood in the corner giggling like a fool. His stumbling up the stairs and “bloody hell!” in response to finding out Tara is Willow’s girlfriend is priceless. The whole scene is also the culmination of Giles getting back in touch with his youth and indulgences since retiring.

Spike confessing his feelings for Buffy in Season 5 is a whole ordeal. The reactions of certain characters (*cough* Willow *cough* Joyce *cough*) bothers me a lot, as they put a lot of the blame on Buffy for ‘leading him on’. However, Giles sees the situation for what it really is: dangerous, and entirely Spike’s problem. When Spike arrives at The Magic Box, Giles directly threatens him. He shoves him into a bookcase (how very Giles), and tells him to “move the hell on”. Again, it’s interesting seeing Giles be assertive. Plus, he’s rightfully protecting Buffy from a predator who’s making her feel uncomfortable.

Perhaps the most impactful Giles moment is when he suffocates Ben to death. It’s shocking and has a great deal of emotional gravity to it. Since Giles committing any violence is so few and far between, it comes as a surprise, but is still very much in character with his dark tendencies. Kudos to him for essentially overpowering a Big Bad too! The fact that he did it so that Buffy could have her heroic moment in defeating Glory while not crossing the line of killing a human being is so huge. Those are the lengths he’ll go to protect her. 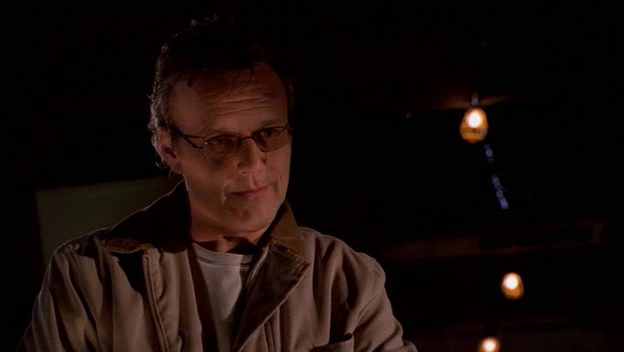 Amongst the heaviness of Season 6, in the midst of Xander and Anya’s engagement reveal, Giles finally reveals to Buffy why he’s always taking his glasses off to ‘clean’ them. It’s so he doesn’t have to see the Scoobies when they’re bothering him—i.e. when Xander and Anya are making out. He says to Buffy, “Tell no one.” It’s a nice little comedic moment, and I love that they also gave an actual, in-character reason for Anthony Head’s famous prop-fiddling.

I’m combining two moments in this section because they’re both too good to leave out and you can’t stop me. Obviously, Giles coming back from England, all powered-up with magic, to essentially have a witch duel with Dark!Willow is a stand-out moment of Season 6 (and the show in general). Just as she’s about to defeat Buffy, and we think all is lost, Giles enters The Magic Box by blasting her with a ball of magic, saying, “I’d like to test that theory.” Actual chills.

But in the next episode, there’s a brief lull in the action and intensity. Buffy uses this time to update Giles on what he’s missed while he’s been gone. After the most bizarre, out of context summary, there’s a pause. Then Giles bursts out laughing. Uncontrollable, unrestrained, glorious laughter. Buffy soon joins in. It’s a moment of pure, hilarious, ridiculous joy amongst an extremely depressing season, putting everything in perspective. Nothing was as needed and satisfying as that.

I’m not gonna lie, there’s a significant deficiency of Good Giles Moments in Season 7. But there is one gem in there. In the season opener, we see Willow attempting to harness her magic as Giles gently talks her through it. He holds her accountable for her actions while showing her kindness and compassion. It’s great to see him finally become her magic mentor of sorts (even though that was well overdue in my opinion). Despite Willow’s shakiness, Giles firmly believes in her. It’s a very sweet and heartwarming moment, plus another wholesome dad moment from Giles.

I could easily go on. To name a couple honorary mentions: Giles swordfighting a skeleton in ‘Tabula Rasa’, and his “The earth is doomed” comment in the first and final episodes of the show. But the moments I’ve mentioned here are undoubtedly the best Giles moments in Buffy. He’s a character who just kept on giving! If there’s any moments I’ve missed here, feel free to comment with your favourites.

Robin writes for 25YL and Horror Obsessive as much as their scattered brain will allow. They love dark fantasy, sci fi, and most things horror-related, with a huge soft spot for vampires. Don't make the mistake of mentioning Buffy around them or they won't shut up about it. Seriously. They're also a fiction writer and aspiring filmmaker; in other words, they much prefer spending time in made-up places and far-off universes than in the real world. Follow them on Twitter @robinmoonwrites!

More From: Buffy the Vampire Slayer