Each week our writers gather in this space to let you know what we’ve been into lately, in something of an attempt to filter through the noise of everything that’s out there on the basis of our collective taste. It’s not about what’s new, but about what we think is worth your time, or at least worth our own in a way we want to share with others. This week’s recommendations include Winning Time, 1883, You Are Not My Mother, and Millennium.

TV Recommendation — Winning Time: The Rise of the Lakers Dynasty

Caemeron Crain: I am not what you would call a hardcore basketball fan, though I have gone through periods in my life during which I was a pretty avid one. The first of these was in the 1980s, as a child in the suburbs of Detroit, rooting for the Bad Boy Pistons. Two years in a row, it was the LA Lakers on the other side of the NBA Finals, the established dynasty to my nine-year-old mind, led by the great Magic Johnson.

So I had that in the background as I sat down to watch the first episode of Winning Time: The Rise of the Lakers Dynasty, which premieres on HBO at 9 pm on March 6, 2022, but it isn’t really my wayward interest in basketball that led me to the show so much as the people involved: Adam McKay directing, the inimitable John C. Reilly starring, and, well you can check out the rest of the cast (I cannot wait to see Adrien Brody as Pat Riley, though he isn’t in the first episode).

This show is electric, and I don’t think you need to know anything about basketball at all to enjoy it. It’s frenetic, but with a smoothness that resembles a great game of basketball. I assume this was the intention, and it’s executed brilliantly.

Winning Time is also pretty hilarious, but not by being filled with jokes. There is a levity to the overall tone, and honestly watching it just made me feel good. I recommend you check it out when you get the chance, and check back for our articles on each week’s episode after it airs.

(Winning Time is based on a book called Showtime but HBO apparently wouldn’t let the show be called that because they didn’t want to tell people to watch Showtime, so they changed the name to Winning Time, which is honestly probably the least appealing part of this show, but I think it will succeed anyway.)

J Paul Johnson:  I’ve yet to see an episode of Yellowstone, the hit series showrun by Taylor Sheridan and now in its fifth season, but its recently-concluded prequel 1883 makes for a masterful standalone limited series, balancing an epic Western scope with a narrowly focused narrative showcasing one of the genre’s truly unique characters.

Some of the series’ fans may be due to its connection to Yellowstone. 1883 tells the story of that series’ protagonists’ journey to and settlement of the Dutton family’s prized Montana Yellowstone Ranch, some four generations earlier. But without knowing Yellowstone any more than the above sentence indicates, I found 1883 a compelling Western on its own terms. Others may be fans of series stars husband-and-wife Tim McGraw and Faith Hill, who are, respectively, perfectly serviceable and slightly less so, in their roles as pioneers James and Margaret Dutton. Or of the sublimely-mustachioed and perpetually-grimaced Sam Elliott. 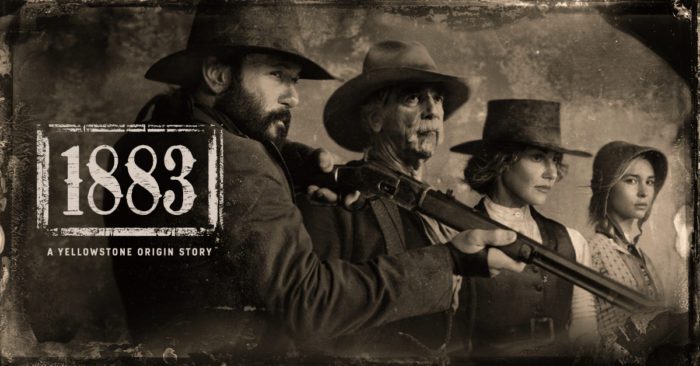 But it’s Isabel May as Dutton’s daughter Elsa, an intelligent go-your-own-way firebrand of a young pioneer horsewoman, who makes 1883 special. Given the privilege of narrating the Duttons’ journey north-and-westward, Elsa’s coming-of-age tale is one too long absent from the Western genre. She is a complex, fierce, capable, and passionate young woman of 19, setting out on a journey along the Oregon Trail that has claimed—and will, across, the series’ so-far ten episodes, claimed—many. 1883 has its romance, but it does not romanticize the difficulties of the pioneers, and it is generally respectful of the native peoples whose lands they crossed.

One might be taken occasionally out of the moment by the blindingly white teeth or dyed hair of 19th-century frontierspeople, or one might take exception to straining of the narrative to meet its exact destination. And it’s probably too late to venture into a full season of 1883—there won’t be a second—unspoiled. But the series makes for excellent television, a limited single-shot season of Western adventure, familial drama, and a young woman’s coming-of-age, even if you are, as I, wholly uninterested in the modern-era series it predates. 1883 doesn’t reinvent the Western, but it sure nails it.

Film Recommendation — You Are Not My Mother

Alix Turner: This week, I watched a film that truly bowled me over. It is now my favourite film of the year (already), and my favourite folk horror film. You Are Not My Mother is a gritty film set in a rough housing estate which gives it a Candyman vibe at times, though this estate is on the outskirts of contemporary Dublin. Directed by Kate Dolan, who had only made short films until now, You Are Not My Mother had its world premiere not in Ireland but Toronto, at TIFF Midnight Madness in Sept 2021, and now its UK premiere is scheduled to take place at Glasgow FrightFest on 11 March.

Why did I love it? You Are Not My Mother is scary and it feels utterly real from start to finish. It stars Hazel Doupe as teenage Char (short for Charlotte) who is picked on by other girls at school because she is a loner and her family is considered by all to be “a bit tapped”. She lives with her mother Angela (Carolyn Bracken) and her Granny (Ingrid Craigie) who all care for each other deeply, but they are all too worn down by life, mental health, or each other to know how to show it. The family bond (as palpable as the one I saw in Relic) is put to the test when Angela’s behaviour changes, subtly at first, following a brief absence.

Inner-city Dublin is real here, the folklore is authentic, girls are truly this mean, and family this painful. The performances of the three main women are pristine all around, and when things get scary, well, I defy you not to feel the fear along with brave young Char.

Christopher Pilbeam: Millennium must surely have one of the greatest TV pilots ever and having recently rewatched it, I am buzzing about this show all over again. Coming from the mind of Chris Carter, this is obviously a must-see series for fans of The X-Files.

It is a much darker take on the same 20th Century paranoia that fuelled the X-Files Myth Arc; Millennium follows protagonist Frank Black (and a cast of other truly fantastic characters) as he uncovers the depths of fear and evil in the shadow of the year 2000. Its influence can be seen across shows like Hannibal and Archive 81, but equally, it is truly unique—it made me say “I’ve never seen anything like that” about a dozen times. And though it certainly has the capacity to horrify, at its heart, it is a story of love (as is Carter’s trademark) because where there are serial killers, cults, and plagues, there is still a glimmer of hope in the form of Frank’s young daughter, Jordan. I could wax lyrical forever, but ultimately if you like TV that’s a little avant-garde, and you want to spend three seasons with unforgettable characters, then do yourself a favour. The time to watch Millennium is now.

What have you been into lately? Let us know in the comments!