To risk the offense of understatement, it’s not been a good couple years for LGBTQ communities. The pandemic created one unique set of mental and public health challenges worldwide. Meanwhile in the U.S. more states than ever have enacted anti-LGBTQ legislation, with Florida’s notorious “Don’t Say Gay” bill and others nearing final approval. In Eastern Europe, Putin’s war on the Ukraine follows his history of anti-LGBTQ measures. In this context, what value can the little hourlong lockdown doc Charlie XCX: Alone Together. (it’s punctuated with that period) provide? For the devoted fans of the British-born, parttime LA-resident pop singer-songwriter, those who call themselves the “Angels,” the answer is a great deal: a communal project, a participatory experience, and a felt sense of belonging in increasingly troubled times.

The documentary, directed by the team Bradley (Bell) and Pablo (Jones-Soler), charts Charli’s social isolation in the early days of the pandemic and her decision to—under unprecedented conditions—make an album, involve her fans in the process, and simultaneously record a documentary of the project along the way. It’s a challenge nearly every working artist faced during the pandemic, and her response is in some ways not unlike The Beatles’ self-imposed and then-unprecedented “Get Back” project back in 1969, which constrained the quartet to the composition, rehearsal, performance, and recording of 14 new songs in two weeks, all under the pressure of the camera.

Of course, our contemporary pandemic brought to artists like Charli a whole new set of anxieties about the coronavirus and its transmission, and mediated technologies for connecting with fans exist in ways unheard of decades ago. Charli’s is a decision that turns her imposed lockdown into a creative challenge. It’s not unique to use the time in isolation to create—artists as diverse as Paul McCartney, Taylor Swift, Bo Burnham, Sleaford Mods, and Yxng Bane all created diverse, impactful music (and Van Morrison didn’t)—but Charli’s project is unique in involving her fanbase in every step of the process. 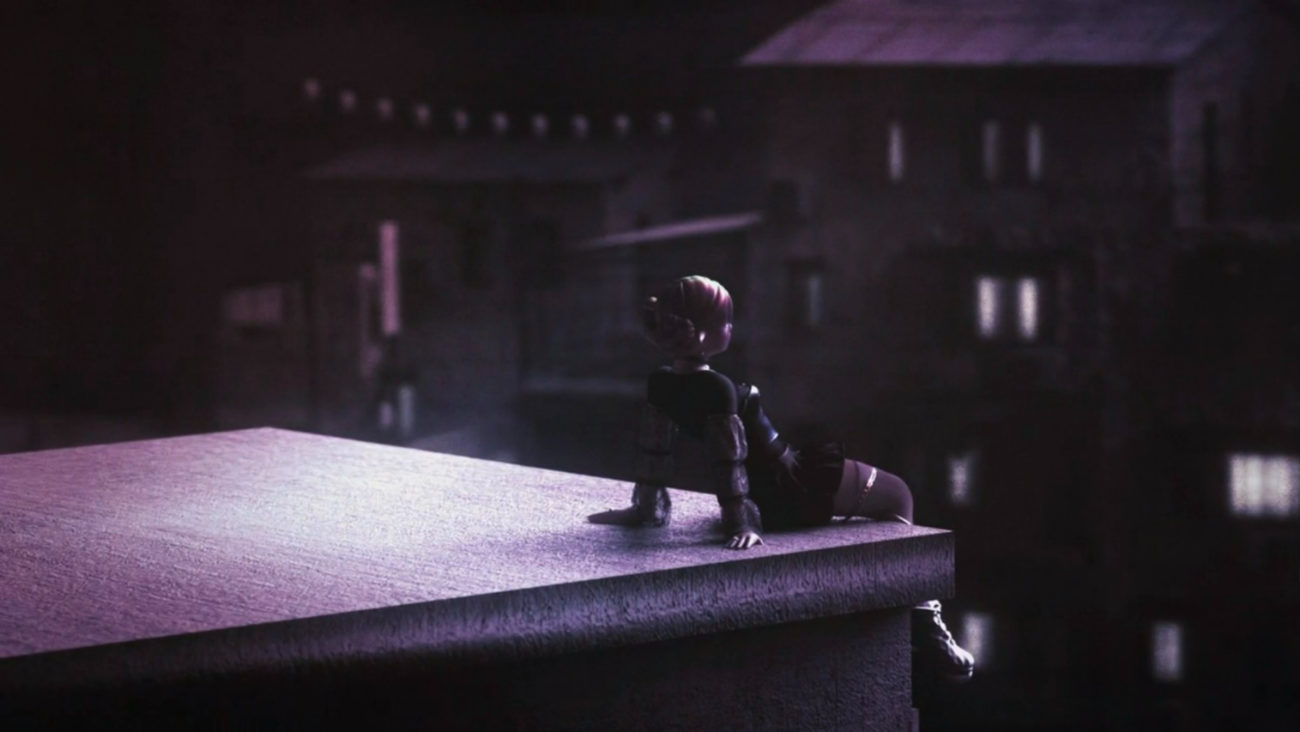 The documentary begins with depictions of her fans’ avatars in virtual realities, expressing their felt isolation during the lockdowns of 2020, before flashing back for some necessary exposition to the world they knew just months before. In 2019, Charli was enjoying her first tour as headliner, having ascended from her early MySpace mp3-sharing days to become a worldwide phenomenon, a critically acclaimed and highly commercial singer-songwriter-entrepreneur known for her support of her LGBTQ fanship. 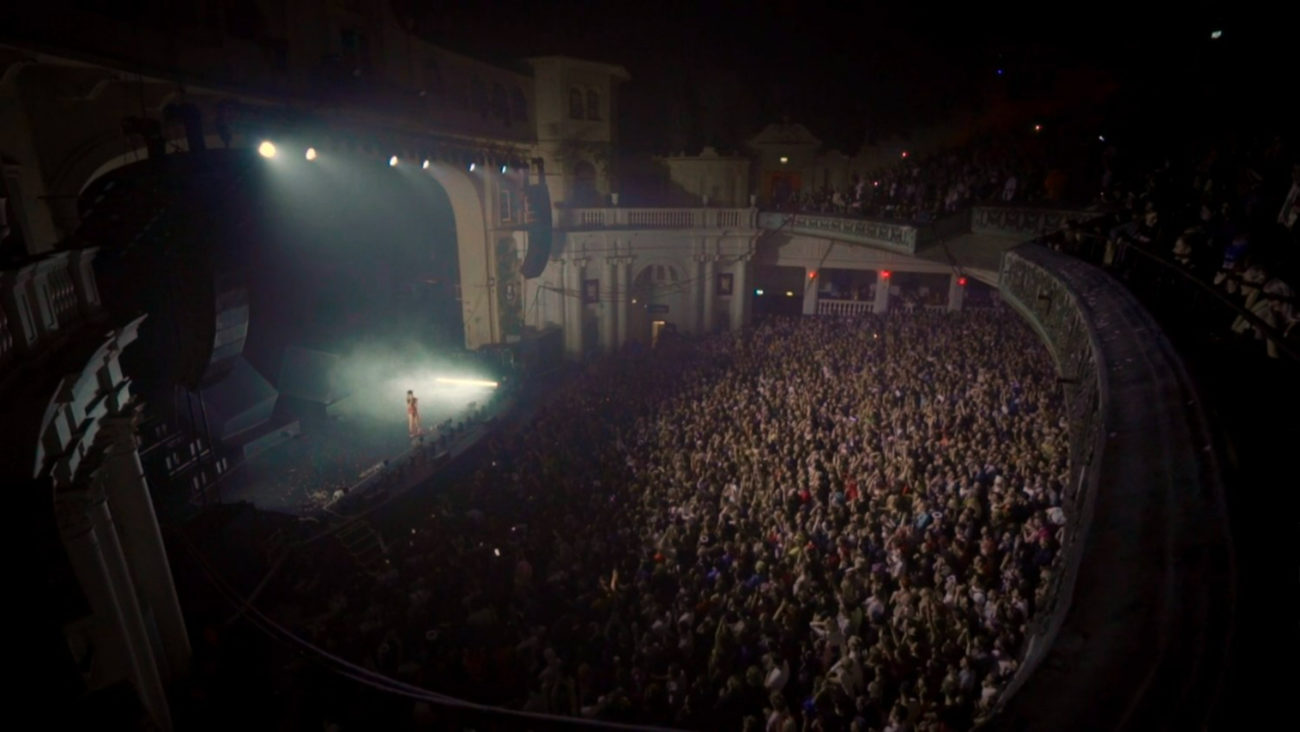 The “Angels”—a loose affiliation of LGBTQ individuals and their allies—enjoy her concerts and public events for the opportunities for meet with each other and their idol, sharing their self-expression through elaborate makeup and fashion in mutually supportive ways. Many of them note, with sadness, how unsupported, how judged they feel by their own parents, family, or neighbors.  and how Charli and her music provides a welcome space. Social media and virtual reality complement their experience.

The pandemic, though, exacerbated their isolation, making them even more dependent upon mediated realities and communications than ever. Without the avenues to connect and perform, one of them says, it’s “like a part of me is missing.” So when Charli—something of a workaholic who needs a project to maintain her own self-control—embarks on the challenge of a lockdown album (and film), one of her first thoughts is to involve her fans in the process. And she does so in a series of lo-fi but incredibly inventive ways, practically crowdsourcing every step of the process.

Charli sets herself a deadline—May 15, a scant five weeks out from the decision date—and à la The Beatles in the Get Back sessions, to do so with the cameras running nearly nonstop. (But that group had the leisure of retreating to their posh homes free from the cameras each night.) For Charli there will be no professional film crews but instead a set of handheld mini-cams, Zoom, and smartphones. And, in the spirit of her deep allegiance to her fanbase of Angels, Charli enlists her fans for feedback on work-in-progress, from lyric drafts, demo beats, and a capella rehearsals to contributions of lines, video, images, and other content to the planned documentary film.

To do so is a rather remarkable leap of faith, not to mention a chaotic whirlwind of a process. Will the acoustics be sufficient, the technologies, the performances competent? Self-imposed deadlines create pressure, so does the reliance on positive feedback. But in an age where one can—and often does—share everything, the risk of failure seems even greater with every step of the process, each false start or flubbed line, each trashed beat or missed note, is made public.

The process is new for Charli, and while it’s more than a little daunting, leading to several crises of confidence, it’s also exhilarating, both for herself and for her fans. For the Angels, the process offers the thrill of being involved directly, creating a sense of unity and accomplishment at each step. The eventual album’s lead single, “Forever,” a dark-synth robo-pop auto-tune treatise on perpetuality, features several lines contributed in an Instagram live chat, and its video is full of fan clips. An (apparently) Amazon-purchased low-tech green-screen give her and her camera-shy boyfriend Huck a chance to cavort and canoodle for the “Claws” video. 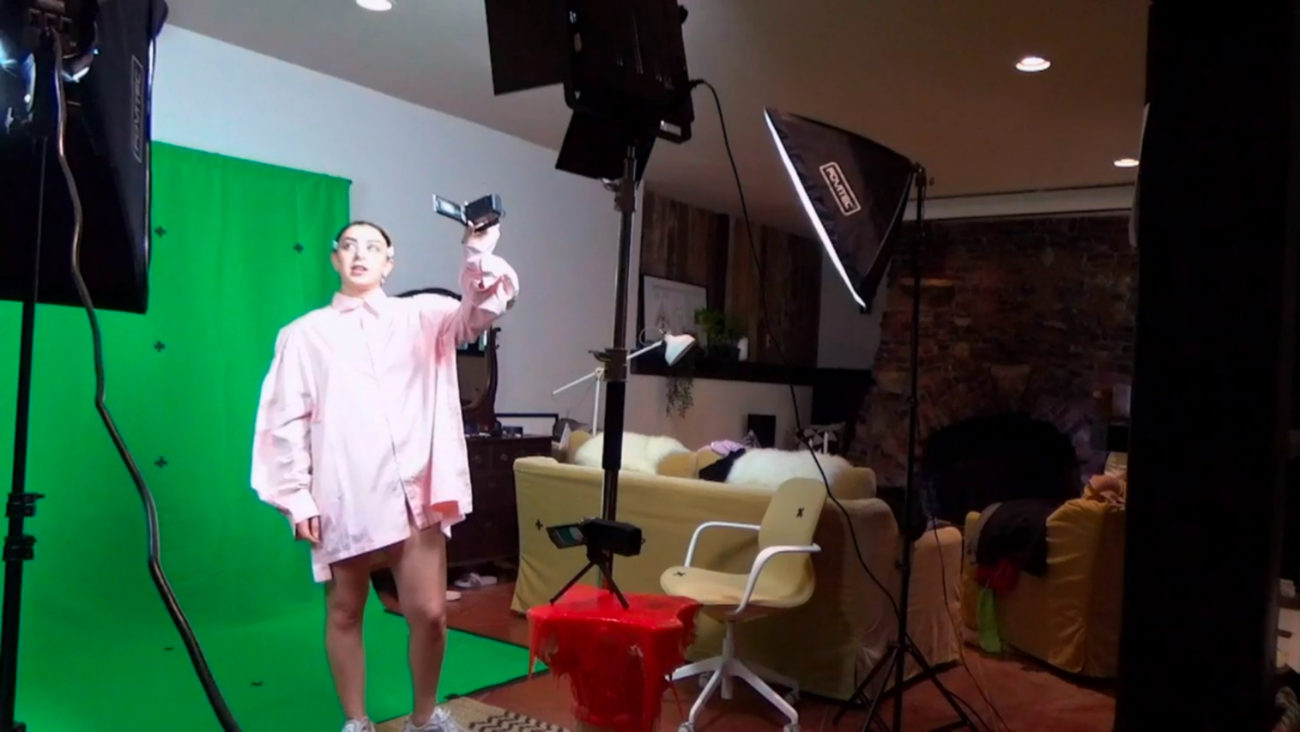 Throughout Alone Together. there is much that is unglamorous, intimate, complex, messy, unadorned. Oxymoronically, Charli’s is an image that is both carefully curated and wholly genuine: at times, the intense and unwavering focus of the camera impedes the creative process. So off it goes. While the documentary feels unfiltered, one has to remember it too is a carefully edited presentation largely under the artist’s control, a part of her creative output and not at all an objective or journalistic presentation of the events it depicts.

The documentary’s treatment of mental health merits some note as well. Charli notes early on that for all her success she continues to lack self-confidence, that without her work she feels like “nothing.” She needs her work, she says, to feel validated. Later on, her charming old dad will affirm exactly that in a video call: “you’re never happy unless you have a project,” he says. For Charli, journaling is part of her therapy, her attention to mental health even prior to quarantine a necessary measure of self-care: the simple words “I’m good enough” are hard for her to believe, much less utter with confidence. 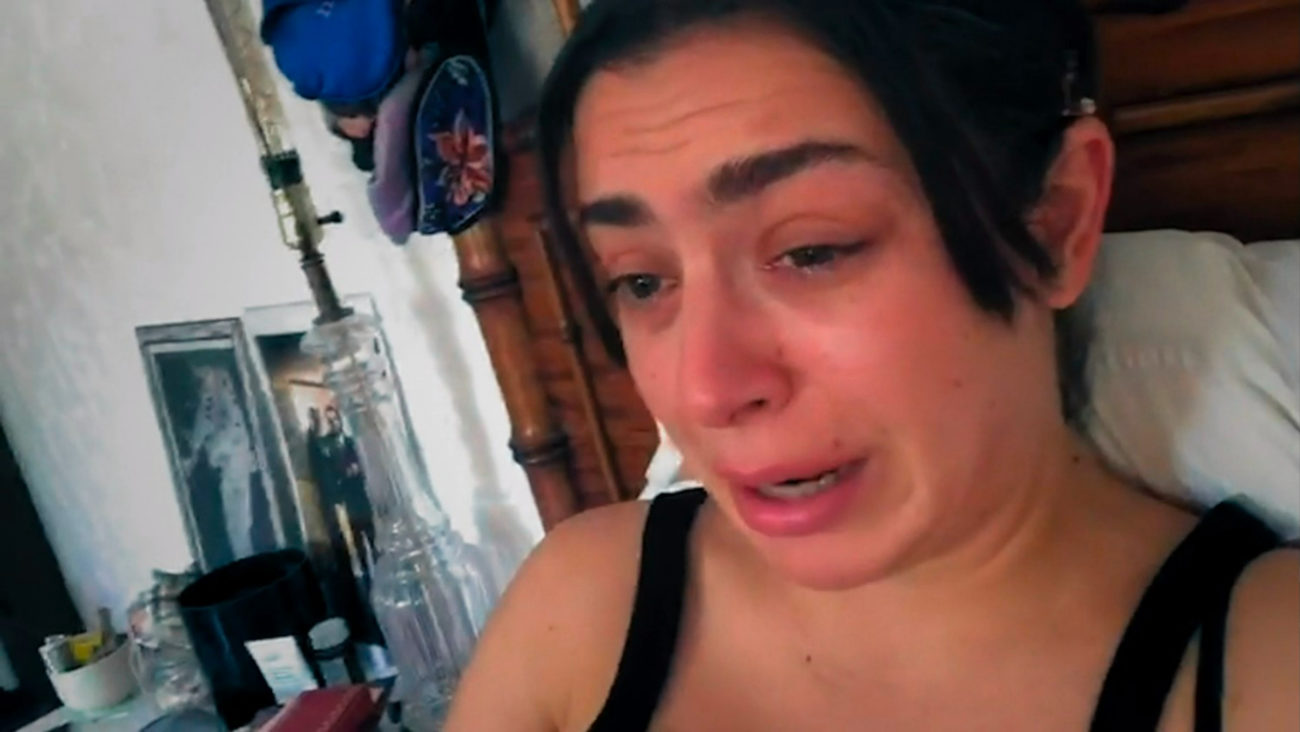 That she is willing to share her journey and emotions so openly with her fans is part of what makes Alone Together. more than just a lockdown lovefest between her and her LGBTQ fanbase. Rather, the documentary itself is testament to the value of creative processes, the symbiosis of fan and artist, and the necessity of communal, validating experiences for LGBTQ youth, especially in these remarkably troubled times. In a world where the words “You can’t seek healthcare, you can’t use a preferred name, you can’t compete, you can’t even say ‘gay’” are fast becoming law, the mantra “you’re good enough” offers some degree of solace and support.

I assume any viewer of Alone Together. knows the outcome of the narrative, as following a third single “I Finally Understand” Charli indeed delivered her fourth album How I’m Feeling Now on deadline—May 15, 2020—to considerable critical acclaim and commercial success. The Angels contributed over 5000 video clips, 2000 cover artworks, and 3000 remixes. In a pandemic it may be tempting to succumb to numbness and depression, but the resultant album is full of get-up-and-shout dance-club technobeats and sing-along anthems moving her fans to jump on their feet—or, in a lockdown, on their beds.

Coming into the documentary I knew a handful of Charli XCX’s songs but little of her backstory or fandom. (For a deeper dive into her music, check out my colleague Hal Kitchen‘s review of How I’m Feeling Now, their countdown of Charli XCX favorites, or their “Perfect Ten” playlist.) I was wholly won over by her engagement with them, her ambition and devotion to her craft, and more than anything by the genuine and heartfelt interaction between her and her Angels.

Alone Together. is currently streaming on most virtual cinema platforms as well as on Hulu. It’s more than a companion piece to a successful album, though. Alone Together. is a significant work exploring the impact of the pandemic lockdowns on artistic creation, mental wellness, LGBTQ communities, and the interactions between them. At just over an hour, it tells its story with sufficient exposition to satisfy those new to Charli’s work and enough energy to engage her fanbase, whose images and expressions constitute a significant percentage of what we see onscreen.

We created a world online, where we could be together.  And we went somewhere without even having to leave our bedrooms in a time when we were forced to be apart. We felt connected in ways we never had before. We were alone together. —Charli XCX

Charli is back on tour and headlining festivals this summer, but in the meantime, Alone Together. offers an hour of passionate energy and enthusiasm for anyone who needs a spark of creative genius and communal love during these troubled times.

J Paul Johnson is Executive Editor and a writer-reviewer at Film Obsessive. A retired professor emeritus of film studies and an avid cinephile, collector, and curator, his interests range from classical Hollywood melodrama and genre films to world and independent cinemas and documentary.