Witchcraft has fascinated people since the dawn of civilization, and it looks like that fascination will never end. ,Recently the film world celebrated a new cinematic reading of Macbeth—Shakespeare’s story prominently featuring three “weird sisters.” In recent times, witches have been more and more viewed as oppressed and misunderstood characters and less as the symbols of evil. This shift reflects the growing awareness that accusations of witchcraft have not been about the supernatural—they reveal humanity’s ignorance in the face of the unknown and a need to obscure the real reasons behind unexplained events. I Am Not a Witch, the 2017 feature film debut of Zambian-Welsh director Rungano Nyoni, is a bitter reminder that large parts of the world still aren’t much different than colonial Salem.

The film’s main character is a nine-year-old Zambian girl named Shula who gets dragged into the police station of a new town because she frightened a woman and made her drop a bucket of water. We never learn what made her wander into a place she’s never been before. More importantly, no one seems concerned about any trauma that could have led her there. As someone who worked in the education sector, my first intuition would be to ask an oddly-behaving child where his or her parents are and if everything is all right. We gather that every stranger in the village was automatically labeled as a witch, especially when they are too afraid to speak out and explain themselves. Shula never said, “I am not a witch”—and the consequences are fatal.

Shula’s existence as a witch started from extortion. She’s been told that either she will serve the state in this particular role or become a goat and soon be killed for meat. She said later that she regretted her choice. It’s not completely clear whether she said that because she was depressed or because she knew she could survive. The police officer clearly doesn’t believe in witchcraft, but she knew that she had to do something to appease the tiresome crowd. She phones Mr. Banda, the official whose job it is to take care of witches on behalf of the state. At first, we see only his back in the bathtub, which amusingly reminded me of Stellan Skarsgaard in Dune: Part One and Wilson Fisk in Netflix’s Daredevil. Banda is a hyperactive character who often monologues about his good intentions while in reality repeatedly contradicting him. Later, we learn that his wife Chastity is also a “witch,” so it’s possible that he chose this job to sexually exploit women. If nothing else, his position gives him avenues for financial exploitation. The women under his custody mostly work in the fields,  hard manual labor made even harder by the drought.

Most of the witches we see in I Am Not a Witch are older women. They are the ones that gave the girl the name Shula, which means “uprooted”. They treat the newcomer with warmth and sympathy, giving her advice and shielding from the hardest work. The women quickly learn that the proper exploitation of their new companion might profit them all more than menial tasks. In Shula, Banda quickly sees his chance to step into the spotlight. The pair makes their way to a TV talk show and tries to advertise eggs from his farm on air. This sounds like an unintentional comedy, but the studio audience and viewers quickly sense possible abuse. Faced with their suspicions, Banda complains to the talk show host about slander, but it is too late to stop his humiliation.

Despite this, Banda quickly burdens Shula with a lot of responsibility. Banda and his people force her to point out the culprit among a group of suspects in a robbery case, make her (unsuccessfully) pray for rain that the local farmers desperately need, and force her to reluctantly pose with tourists visiting the witch colony. Most of the time, Shula suffers those abuses with quiet dignity, with newcomer Maggie Mulubwa proving to be a very capable actress in the role. She says very little, save for the ritual incantations, but communicates a wide range of emotions with her facial expressions. Sadly, the most common emotions are predominantly fear and despair.

Zambia in I Am Not a Witch isn’t a great place to be a woman. Early in the film, we learn that witches are tied to the ribbons that prevent them from flying away. It’s only a metaphor invented by Nyoni, but the dichotomy between female witches and their male guardians is obvious. Witchcraft wouldn’t be an institution in Africa without witch doctors “confirming” their supernatural connections with bogus rituals. Banda’s wife lives in much better conditions than Shula, but as a former witch, she couldn’t even go shopping without being harassed. At one point, she tells Shula that the only way to escape the witch camp is to marry the right man. In the film, there is also a scene of confrontation between another witch and her male denouncer.

On the other hand, despite all of his smarmy tone and bossy attitude, Banda isn’t a complete monster. Learning from his talk show debacle, he decides to send Shula to school. She seems very happy among her peers but doesn’t end up staying there for long. The local female tribal leader sees her education as a waste of money and scolds Banda for allowing it. She was visibly afraid that Shula would give her and Banda less revenue while staying out of the camp.

The presence of the female tribal doesn’t show only that higher-class women can be as selfish as their male counterparts. It also touches on the unusual political system of many African countries. In theory, the official recognition of the authorities sanctioned by tradition seems like a good step toward decentralization in post-colonial reality. Zambian chiefs sometimes advocate for progressive causes like the fight against child marriage or the promotion of sustainable agriculture. I Am Not a Witch show the negative side of this phenomenon: the possibility of corruption and cultivating old prejudices. Although news items depict Zambian state officials in a bad light, recent history shows that there are valid reasons for such.

However, it must be noted that Nyoni researched I Am Not a Witch mostly in Ghana, not Zambia. This is one of the reasons why we cannot take the film as a completely accurate picture of Zambian society. It is easy to check that threatening others with witchcraft or accusing people of such practices is a crime in that country since 1914. Certainly, the reality is more dire. Not so long ago, one of the local chiefs complained that courts demand proof of witchcraft from plaintiffs, and some individuals make good money from creating such proof.

My article paints a very bleak picture of the film, but I laughed quite a few times during my first viewing of I Am Not a Witch. Most of the jokes come from the clashes between ancient traditions and the slow advance of globalization; for example, Shula’s trial gets interrupted many times by the “Old MacDonald Had a Farm” ringtone the elderly owner of the phone didn’t know how to mute. At one point, the witches received wigs labeled with the misspelled names of celebrities like “Beyancey.”

Western culture is shown as something very alien to Africans, especially the older generations. Sometimes, it serves as a symbol of the will to escape their harsh reality, like in Estelle and Kanye West’s song “American Boy,” which can be heard near the final act of the film, which is about intercontinental travels that are unavailable to African kids. The song cuts off when the especially flirty part comes, and love is also something out of reach for Shula. Maybe, under the right circumstances, she could bond with the boy behind the plow listening to “American Boy.” I Am Not a Witch also employs traditional Zambian songs, with the music-loving older witches acting as counterpoints to the almost mute Shula. Apparently, it takes many years of persecution to find the courage to find your own voice in that community.

It’s hard to imagine the seriousness of such a choice for the people that know about African witchcraft only from humorous news pieces. Even if she shrouded her message in dark comedy, Nyoni succeeded in showing the realistic problems of a realistic person. In my opinion, it makes this film not only an artistic triumph but also a valuable contribution to the conversation about human rights in Africa.

Kordian Kuczma is a writer, tour guide and teacher from northern Poland. One of his biggest dreams is to write the comprehensive biography of Pet Shop Boys. Being a good European boy, he chose to live his life in the company of Bergman and Tarkovsky. Kordian's path is a strange and difficult one. 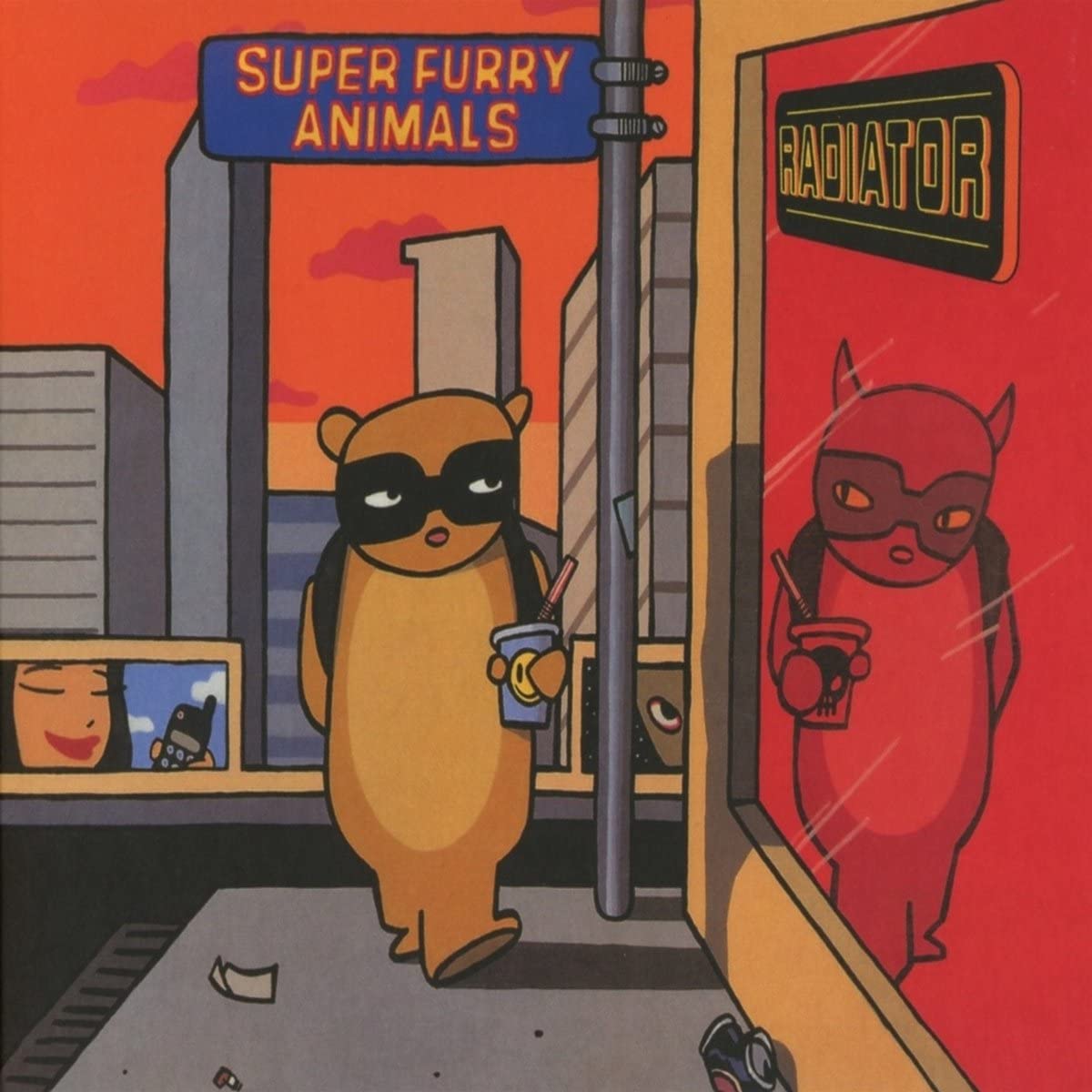