When the Buffy the Vampire Slayer musical episode, “Once More, With Feeling,” first aired in November of 2001, I did not watch it. Nor did I have any intention to do so. I had never seen the show. I was living in Colorado working at a ski resort and I’m not even certain I had a television. But, as tends to happen with getting me to try new things, my friends wore me down over the next several months. “You would love the show,” they would say, “and even if you don’t love the show, this particular episode was made for you.” As has been the case with almost everything I love the most (all the way to my relatively recent discovery of Avatar: The Last Airbender, they were right.

More than just a single episode of a television show, “Once More, With Feeling” is the type of indelible experience that can stick with a person forever. Many shows, especially fantasy shows and particularly in the years after Buffy did it, try musical episodes. And, as an intense fan of musical theatre and the art of making musicals, many of them work for me. But this one is different. It is more fully realized and more relevant, both to the story and the thematic and character moments it expresses. The songs don’t just fit and serve the plot, they are the crucial driving character building and emotional framework not just for the episode, but for the entire season of the show.

All of this is summed up by the demon, Sweet, the primary antagonist, who memorably sings near the end of the episode: “All these secrets, you’ve been concealing. Say you’re happy now., once more, with feeling.” The themes of loss, grief, and overcoming internal and external demons are laid bare. The idea of the musical episode is among the most grounded and emotional of the entire series is sometimes hard to grasp, until you realize that Joss Whedon’s muse for the project was Stephen Sondheim.

Sondheim’s musicals redefined the entire genre of musical theater. He took on themes, both dramatically and musically, that no one before him and dared to do, and few that have followed him have actually succeeded in matching. Along with bringing the musical genre into a new form, Sondheim has also inspired generations of creators to new heights of experimentation. This struck a chord with Joss Whedon who decided to write a musical and joined up with Christophe Beck to do so.

Whedon got to interview Stephen Sondheim at the “Wall to Wall Sondheim” celebration for the composer’s 75th birthday in 2005. In that interview, Whedon expressed what made the episode so essential for him was the ability to take the lessons on the art and apply them to the characters. By signing, they were able to express things about themselves that they never could have done in a straight dramatic fashion.

It is clear that, like so much of the work that inspired it, “Once More, With Feeling” really leans into the thematic and emotional resonance of the musical form. This is not a pastiche done to try to get the songs on the radio and just to do a musical episode for the fun of it. The main theme, that we keep hidden those things that we most need to share, could only have been expressed as effectively in this format. The characters sing because they cannot speak. 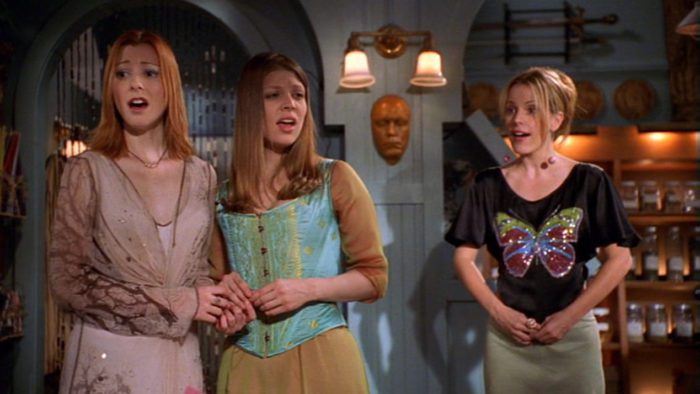 Each main character, except Willow, who we will get to momentarily, gets a spotlight song. In another nod to the Sondheim influence, they are essential for both the plot and the character development and are never simply surface-level fluff. These songs are not there existing on their own. Each of them has a reason to be in the show and can be explored in great detail.

Giles (Anthony Stewart Head) and Tara (Amber Benson) have been struggling with the relationships that define them. Giles has been questioning his role in Buffy Summers’s (Sarah Michelle Gellar) life for the entire season and his verses will lead him to leave her for good, and for her own good. Tara realizes that her relationship with Willow is on the rocks and that Willow is going down a dark and dangerous path. Allyson Hannigan has spoken about how she was uncomfortable singing but her remaining closed off, even as Tara is passionately brought back “Under Your Spell,” works perfectly for the character. She is basically already too powerful to be brought under the curse and instead uses it to her own nefarious means.

Not as powerful, but perfectly placed character-wise, were the songs for Xander (Nicolas Brenden), Anya (Emma Caulfield), and Spike (James Marsters). Xander and Anya hilariously bare their fears in “I’ll Never Tell” which, being a book number rather than a breakaway pop-hit, is one of my favorite songs in the show. Spike channels his rage and impotence into his song. Seething and screaming and ranting at Buffy, but like the dichotomous character he has become, also exposing the depths of his (no-longer) beating heart.

Buffy for her part is closed off and freezing everyone out, as she starts singing the powerful song “Walk Through the Fire,” she starts out alone, but the most powerful part of it is that within that song, the entire Scooby crew is able to come together. They join forces, with Tara and Anya backing up Buffy literally, and that is the only way they can actually move forward. Their secrets have been dividing them, but when they come together as a crew they can sing a much more powerful song and defeat their demons.

Of course in Buffy the Vampire Slayer the demons are literal as well as figurative. This leads us to the final great piece of the “Once More, With Feeling” puzzle: Sweet. Sometimes, a combination of role, performer, and thematic resonance makes a character truly special. Sweet, the Demon antagonist, certainly fits that bill. He is a musical villain but he does not actually sing very much.

In fact, Sweet has very few lines in the episode at all. But he sticks in your mind so clearly that even now, 20 years later, I can instantly recall almost every beat of Hinton Battle’s performance. Perhaps there is good reason to cast a three-time Tony Award winner as your singing and dancing primary antagonist? But that doesn’t seem to be the case here. Sweet’s creepy kidnapping and attempt to force Dawn (Michelle Trachtenberg) to marry him is pretty nefarious, but he makes it so much fun the audience is tempted to forgive him.

Of course, villains like Sweet can be difficult to write effectively, especially when they are given so little actual screentime. They can fade into the background, or go far too over the top when they are on screen. But that isn’t the case here. Every scene with the demon is great and even while he isn’t there the musical trouble he has wrought is everywhere. He is basically defeated by chance since Xander and not Dawn was the person who summoned him in the first place, which makes the whole endeavor even more meaningful thematically. The gang doesn’t really win, but they have to live with the consequences of what has happened. Sweet won’t ever return to the show itself, but the effects of his time in Sunnydale, and on the viewers, will last forever.

Of course, as with so much of Whedon’s work, “Once More, With Feeling” has a lot of elements that can be seen in hindsight as evidence of his considerable issues. The casual misogyny of Xander Harris is the subject of plenty of discussions and much of it is intentional and explored on the show. But there is also an undercurrent of deeper issues in the character. As with so many other themes and developments that are brought out during “Once More, With Feeling” for the remainder of the series there will be a particular focus on Xander’s feelings of inadequacy. And yet, especially when considering the problematic actions of Whedon and the many ways that Xander is his avatar, these issues sometimes seem less like explorations of a flawed character and more like a series of excuses for the “put upon guy”.

This is also true for Spike. There is particular darkness looking back at Spike’s actions throughout Season 6 and the “hate and violence” side of the relationship with Buffy is spotlit during the episode, but it is certainly never explored in any depth. While this aspect of Spike can be too much and is particularly off-putting now, in “Once More, With Feeling” the character’s fears and motivations are put forward in such a striking and compelling way that it makes it incredibly easy to be on his side.

And that is the problem. When listening to “Rest In Peace” and James Marsters’s growling, achingly intense performance, it is incredibly difficult not to relate to the character. And the character is abusive, manipulative, and violent throughout his time on the show. All of that is great for the resonance of the character and it all stems naturally from the fact that this creature is a demon, but that also complicates the viewing experience now. I still love Spike, I still relate to that passionate, rebellious, fury. But, I still think it is imperative to confront that identification and to explore what it means about us that we so willingly embrace those characters. For as fun as the character can be, it is important to note that Spike sings in the big finale, “No, I’ll save her, then I’ll kill her.” And it seems clear from the context and the delivery that he actually means it.

Like so much else regarding creators who have gone off the rails, these issues with Joss Whedon and the misogyny he apparently exuded do not invalidate the other, valuable, and engaging parts of the episode. They just make it more difficult to love the creation as fully as we once might have done. “Once More, With Feeling” is still an incredible achievement. A musical wonder that builds on everything around it and propels the entire series forward with an incredible purpose. It is just sometimes hard to answer the question at the end: “where do we go from here?”

More From: Buffy the Vampire Slayer