Today’s missive from the festival includes a pair of international dramas, one exploring Chile’s past, the other Georgia’s present, in the chilling period drama 1976 and the ruminative romance A Room of My Own.

Winner of the festival’s Best First Feature Prize, 1976 joins the ranks of other Chilean period dramas exploring the national shame of the atrocities committed under Pinochet. It’s a more direct but less hard-hitting film than many of its sisters, focusing on the fretful radicalization of a comfortably off woman who finds herself entrusted with the care of a fugitive activist with a bullet in his leg. In between renovating her beach house, reading to the blind and entertaining her young grandchildren, Carmen (Aline Kuppenheim) procures medicine and rendezvous with other allies hoping to get her handsome charge to safety.

The plot sounds like the setup to a crass romantic intrigue, with the idle middle-aged beauty with an absentee husband and the young activist who brings a spark into her routine, privileged existence, but it’s a much more tasteful and tactful film than that. That’s not that such a tawdry romantic angle couldn’t necessarily have been explored judiciously, nor that a little well-placed heat couldn’t have improved 1976, but it’s a chaste and respectful affair that keeps its mind firmly on its political aims: exploring the ways people, middle class women especially, are coerced into complicity with violence. It’s direct and takes few sideways poetic approaches. Even the beachfront property Carmen is renovating and seems to be crying out for a symbolic function largely eludes one. There’s the motif of mixing pink substances—paint, cake mix, etc.—that’s even more pointed an inclusion, but I must admit, the meaning of this eludes me too. Perhaps it’s just innocent white being stained with blood red, though writer-director Manuela Martelli may have had something more specific in mind. 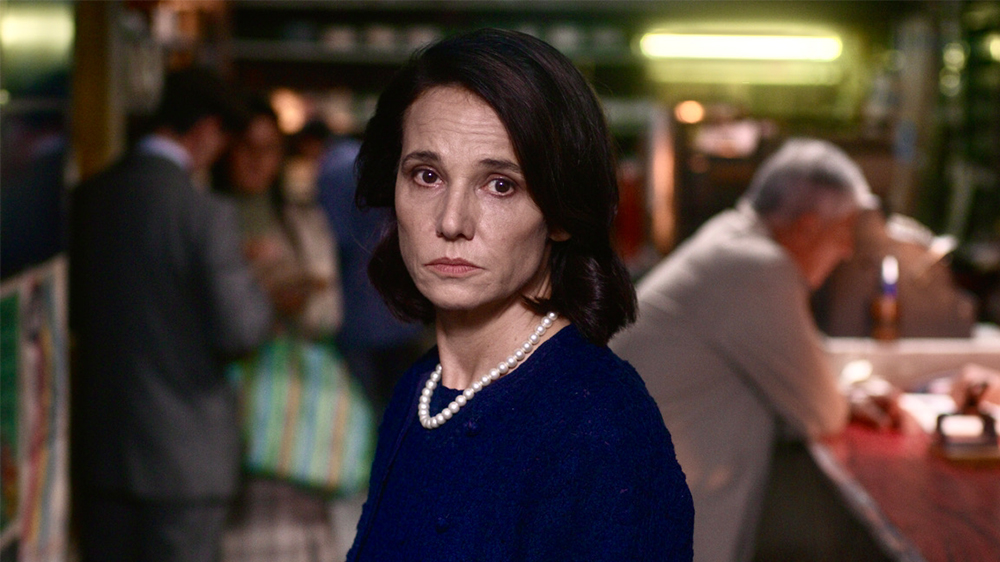 The most striking thing about 1976 is the music; Maria Portugal scores it like a horror film, with sinister clamorous stings dissonantly punctuating the onscreen action. The cinematography of Soledad Rodriguez also works to subtly but effectively underscore the tension and rising sense of paranoia and panic seeping into every facet of Carmen’s once carefree life. It’s the cowed, pensive performance of Kuppenheim that holds the film’s corners in place though, playing a woman who has learned to embrace a life of such crushing respectability and security, who despite her revelations, is always a day late and a dollar short when it comes to realizing how far out of her depth she’s getting. In the few moments where we see her forget herself, Kuppenheim gets to show us a glimpse of the happier, active agent she could be in a more idyllic world than Pinochet’s Chile.

1976 is an assuredly crafted, insidious and poignant work that testifies to the presence of a lot of talent and good taste. It knows what it wants to say and how best to say it and should be sufficient to convince any audience that Martelli will go on to make great films someday soon. But 1976 itself is too unadventurous to ever call great. It has too much of its own heroine in it; it is too well behaved for its own good. Perhaps that is what some will call its greatness, and see in its ordinariness, maturity, sensitivity and graceful severity. It’s no fun, and few would dare to say it should’ve been, but it does little to distinguish itself from its fellows elsewise; a work of greater subjectivity and empathy could have possessed all the same virtues, and still dug deeper into both its heroine, and its audience.

A Room of My Own (dir. Ioseb Bliadze, Georgia)

Films set during the COVID-19 pandemic will have an eerie sense of temporality in the years to come. It’s remarkable how little of a visible imprint the pandemic has left on many of the films produced in recent years, when they choose to conceal the circumstances of their production. Those that embrace those circumstances take a gamble on going with the specific temporal setting, one that can’t help but inform how the viewer experiences them, and a film like A Room of My Own will permanently bear the hallmark of the year it was filmed.

The pandemic does leave its fingerprints on the story of A Room of My Own, though not to such an extent it could only have been written with the circumstances in mind. The title alone offers a window into how the sense of domestic isolation and familial separation it engendered could feed into the themes of rediscovering yourself through an unexpected intimacy and familiarity. Many of us were lucky enough to be isolating with family or close friends, some unfortunate enough to have to go it alone, and some, like A Room of My Own‘s protagonists, had to endure it with a stranger they had little in common with.

The film follows the introverted and lonely Tina (Taki Mumladze), who through a series of distressing circumstances we slowly discover throughout the film, finds herself alone in Tblisi in need of temporary accommodation, which she finds by answering the room to let advertisement of the confident and outgoing social butterfly Megi (Mariam Khundadze). Tina’s boyfriend is away for work and their plans to live together have been put on hold, leaving her in limbo living with a stranger whose gregarious temperament could hardly be more different from her own. Slowly though, as the two open up to one another, they begin to establish a familiarity, understanding, intimacy, and perhaps even something more intense, as Megi’s fun loving lifestyle begins to erode Tina’s introversion and dependence on her boyfriend.

A Room of My Own is hardly the first film to observe and express the concept that friendships between women are not only healthy and rewarding on a personal basis, but form a kind of bulwark against patriarchal assignations of gender roles and offer a form of social liberation that’s subtly political. However, the film, directed by Ioseb Bliadze and co-written with him by its star Mumladze, offers a distinct understanding and perspective on it, through its functionally unique setting of a Locked-down Tblisi.

The centrality of the domestic space is a fruitful avenue for the film and one it could honestly have made more use out of. Though it could have unfolded as a near two hander, there’s actually a substantial supporting cast. Tina has much unfinished business with family members and her ex-husband as well as her boyfriend, and Megi constantly has friends and sometime lovers coming and going. By more than mere proximity, Tina is drawn into this social whirl and begins to taste the freewheeling, independent lifestyle of her singleton roommate, climaxing (as it were) in one of the most realistic scenes of getting high for the first time that I can remember.

Though Tina’s tumultuous backstory and belated coming of age are compelling in their way, the friendship between Tina and Megi is the film’s strongest element. Mumladze gives an intense performance as the lost and isolated twenty-something while Khundadze shows vivacious charisma as Megi, balancing youthful exuberance, spontaneity and playfulness with refreshing maturity and self-confidence. She’s eventually empathetic to Tina’s situation and sympathetic to her needs and desires, but foremost she needs her to not be getting her s–t together on her time, is unafraid to dispense tough-love and may be working harder to keep her own fast-paced life in order than she outwardly appears. She also makes mistakes and does things she really shouldn’t, in one moment in particular her behavior towards an intoxicated Tina is highly questionable, but she’s clearly wrestling with her own confused feelings. Bliadze might not know what to do with himself during these more intimate moments between the women, but the actors certainly do.

Its scenes often unfold at a speed that allows for the organic growth and interactions of the characters, but this slow pace may not always work to its advantage, certainly not for some tastes. A more astute script or dynamic approach to the style could’ve magnified the intensity and deepened of some of the emotional waters the film explores and through which it occasionally seems to be only dawdling. Once again, it’s the strong performances of A Room of My Own that keep you engaged, while the story doesn’t seem to have too much to say that hasn’t been said more forcefully or credibly elsewhere. Still though, its positive message is admirable and convincing, and its difficult characters are interpreted so realistically, it’s hard not to get invested in their actions.