Of the many mysteries raised in The Return, the question of what exactly is happening with Sarah Palmer is the one I find the most fascinating. Sarah has always been one of the gifted and damned. She has always had supernatural visions and some connection with the Black Lodge. I don’t believe that Sarah was born with this ability but rather that it is a by-product of the space she has occupied for most of her adult life: the Palmer House. 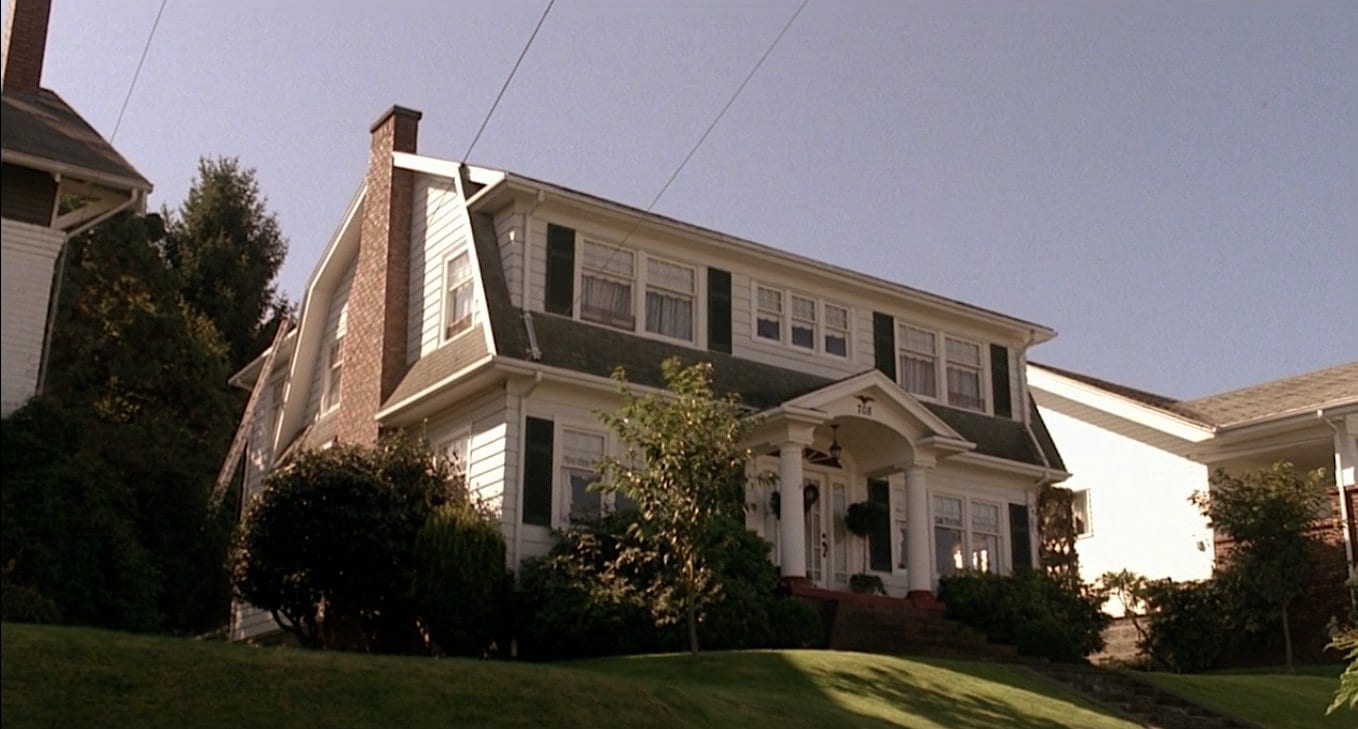 The Palmer House has been the site of unimaginable horrors and violence perpetrated against the women who have occupied it. For many years before Laura’s murder, Leland was raping her and drugging Sarah. Soon after, the Palmer house living room was the site of Maddy’s brutal murder. It is the place where Sarah and Maddy had visions of BOB and of blood and of that white horse. It is the place where Leland’s hair turned white overnight.

The question still remains, in my mind at least: how much of it was just BOB and how much was Leland himself? We know that BOB did possess Leland, likely from a very young age, but what we don’t know is whether or not BOB was always with him. In The Return, DoppelCooper looks in the mirror in his prison cell and says, “You’re still with me. That’s good.” The implication is that he was unsure whether BOB was still inside him, which could mean that, at points, he was not. I would argue that BOB is able to come and go as he pleases. This is more applicable to Leland than to Cooper, whose situation is complicated by the fact that there are now two of him in the world. But I believe that, when Leland was his host, BOB had more freedom to come and go as he pleased, and that he was not always inside Leland. He was, however, always close by. This is because, in many respects, the Palmer House is BOB’s house.

BOB had unrestricted access to the house, not only through his physical host Leland, but through the electricity in the ceiling fan. Because of this, I believe the Palmer House contains a great deal of residual Black Lodge energy—energy that made it possible for the painting given to Laura by the Tremonds to open up a portal in her room that led, as we now know from Part 15, to the maze of convenience store wallpaper rooms. From here, one can access the Black Lodge. I would argue that the Palmer House is in its own way a portal to the Black Lodge, though not in the same way as a vortex in the sky or a circle of engine oil in the woods. The Palmer House is so infused with the dark energy of the Lodge that it has become fully accessible to Black Lodge spirits. It is a door that is open both ways. It is a liminal space—a threshold between worlds, ripped open by the evil that has happened there.

When Sarah tells the grocery store clerk that “men are coming,” I believe she is saying this because she has seen them—the Woodsmen—in her own home. We know Sarah (or some version of Sarah) contains a deadly spirit within—a spirit that had easy access to Sarah Palmer because the door is always open. BOB always had direct access to the Palmer House, and the evil that was done there has left an indelible mark on the space, to the extent that evil is drawn to the house. The place is so full of pain and sorrow it might as well be built from garmonbozia.

The scene when Hawk visits Sarah and hears the sound of empty bottles clinking in the kitchen leads me to believe that something else is inside. It has been suggested that Sarah might have a doppelgänger but I don’t agree. I think the sound we heard was a visiting black lodge spirit, maybe the one we saw behind her face in the bar scene. The scene where Sarah watches the boxing match on loop is more evidence that the Palmer House is filled with energy from the Black Lodge—a place where time itself is distorted.

We still don’t know exactly what is going on with Sarah, but Fire Walk With Me and The Missing Pieces give us a great deal of insight into Laura’s experiences in the Palmer House. The most obvious example of this is the painting. Mrs. Tremond and her grandson approach Laura as she is preparing the Meals on Wheels and they give her a painting of a wallpapered room with an open door. Mrs. Tremond tells Laura, “This would look nice on your wall.” 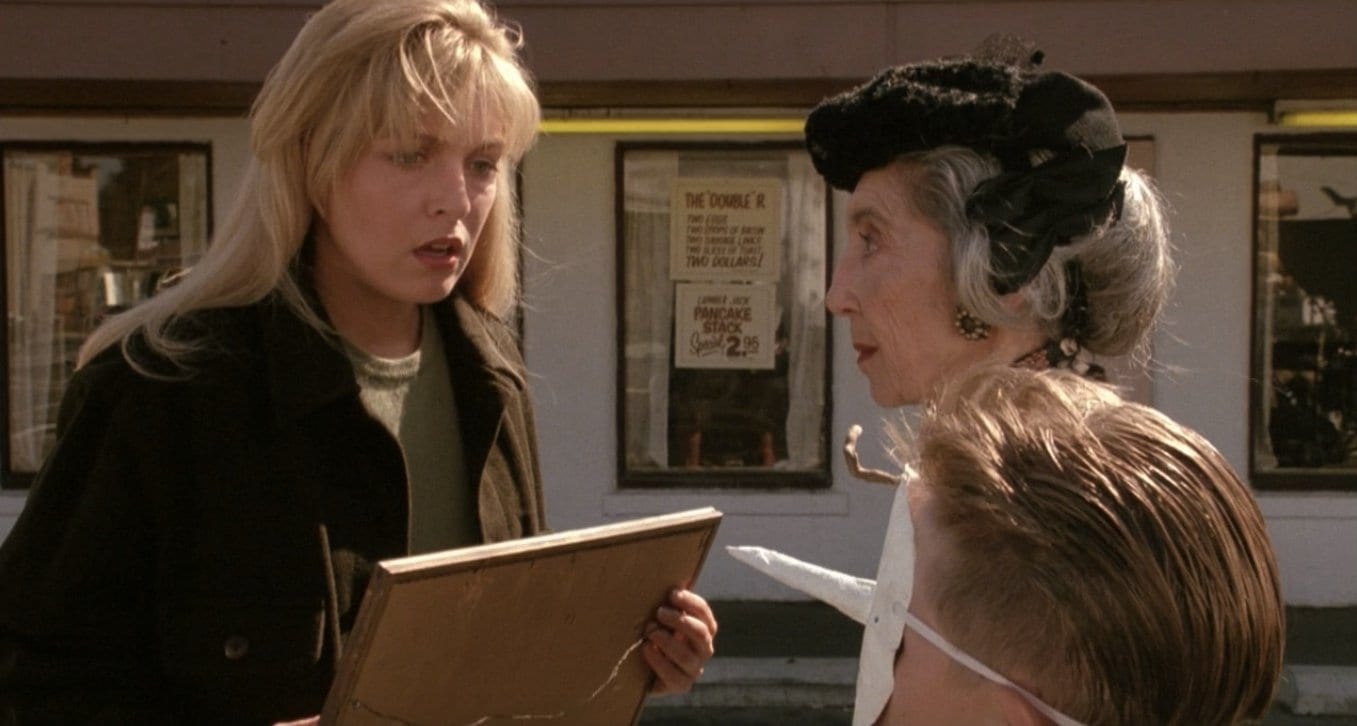 The painting ends up being a portal to what we now know, thanks to several scenes in The Return, is the area above the convenience store. There is also direct access to the Black Lodge here since the red curtains are clearly visible behind Laura as she stands inside the painting—the dweller on the threshold. The painting allows Annie to visit Laura and give her the message to write in her diary, and it also allows Laura to enter the convenience store/Black Lodge. This, ostensibly, occurs in a dream, but an argument could be made for these things having actually happened and Laura just waking up thinking she’d been dreaming. 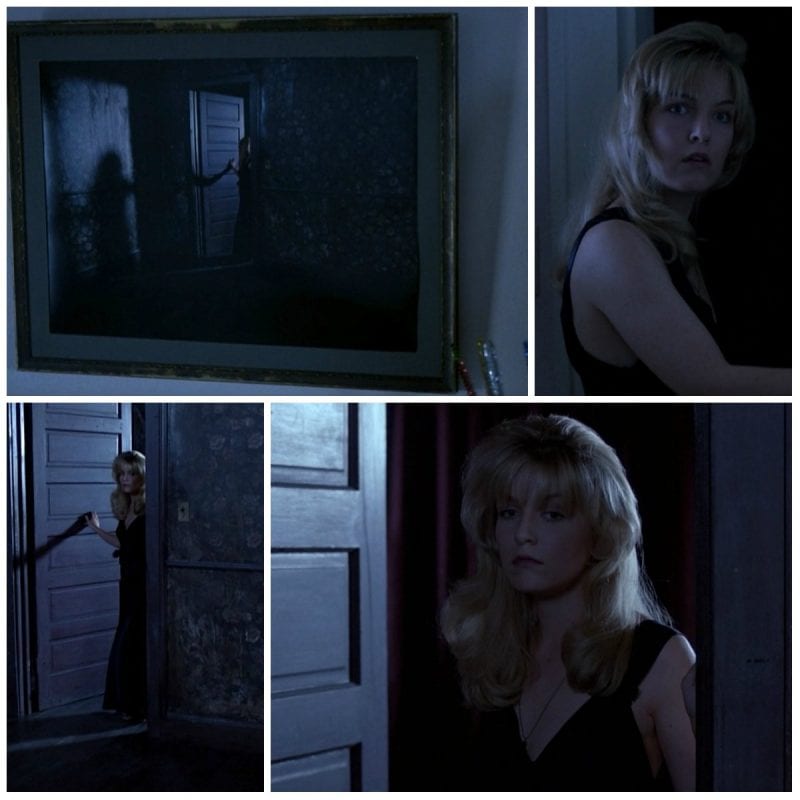 The scene in Fire Walk With Me (and extended in The Missing Pieces) where Laura stands under the ceiling fan is another piece of evidence that the Palmer House is not what it seems. BOB speaks to her through the fan, telling her, “I want to taste through your mouth.” Laura tries to resist the thrall of the fan but she’s unable to. As she stares at the fan with light flashing, her mouth contorts into a terrifyingly familiar smile. 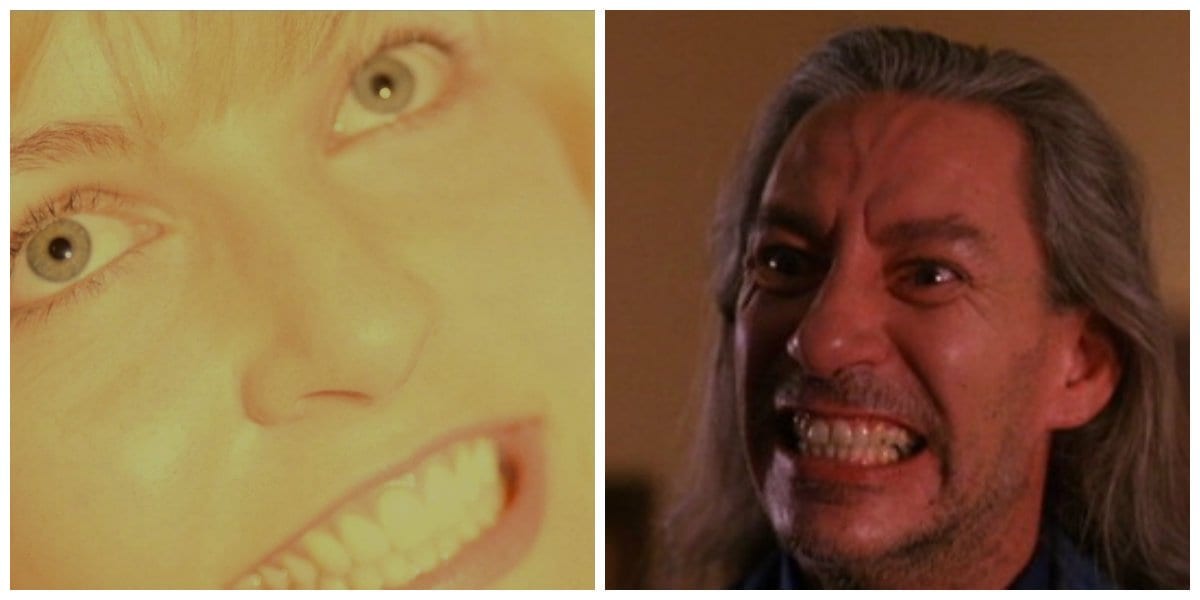 Leland is not at home when this happens. Laura’s experience of near-possession by BOB happens independently of Leland’s presence. It happens through the fan—a part of the house itself that allows BOB access to Laura. It is also significant that immediately after this happens, Sarah appears at the bottom of the stairs in a confused and then panicked state, telling Laura, “It’s happening again,” as if she can in some way sense BOB’s dark energy pulling Laura in.

Laura has always maintained that, since she was 12, BOB came in through her window at night—the window that happens to be on the same wall she hung that painting. If BOB was always inside Leland, why would he ever come through the window and not use the bedroom door? Are we to believe that Leland went outside and scaled the exterior into Laura’s second-floor bedroom each time he attacked her? It could be a figment of Laura’s imagination, of course, but I think there is more to it than that. I think that BOB sometimes entered through the window on his way back to his human host inside the house. That wall in particular offers an access point into the Palmer House, where his host and victim live.

After the ring, the painting is arguably the most powerful physical object in the Twin Peaks universe, and it was hand delivered to Laura—for her wall in particular. I don’t think that the painting would work as a doorway just anywhere. I think it can only be used inside the Palmer House and possibly also on the convenience store side of things. One of the remaining mysteries, which has not been addressed in The Return, is what happened to the painting? Laura took it down but she didn’t get rid of it, and it was not in her room after her death. So where is it? Could it still be somewhere in the Palmer House acting as a portal—this time for Sarah instead of Laura? 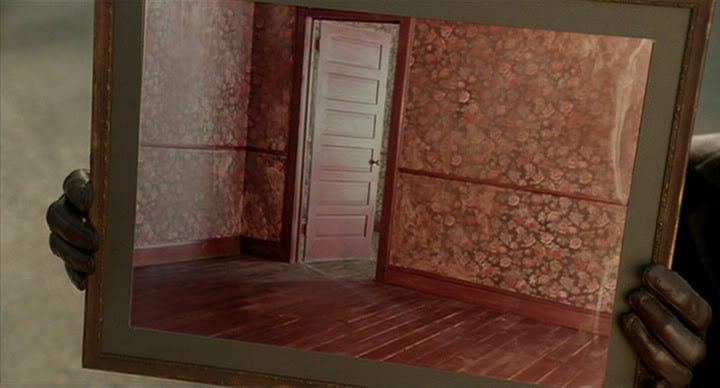 With three hours left in The Return, I’m not sure we will get answers to any of these questions, but I think there’s enough evidence in the original series, the film and deleted scenes, and The Return to suggest that the Palmer House is a Lodge-adjacent liminal space. It has always been home to the evil that men do, and if Sarah is to be believed—and she should be—more men are coming.

As always, we’d love to hear your thoughts. Join the conversation by commenting below, on 25YL’s Facebook and Twitter, or hit me up directly on Twitter @alimscrbbles. I’ll see you in the trees…