It’s been 24 years since Caleb Carr first published The Alienist. We Twin Peaks fans know a thing or two about waiting to see something we’ve anticipated happening for many, many years. Well tonight was the night,  The Alienist premiered on TNT.  I had no real expectations going in. I’m ashamed to admit that the lovely book TNT lovingly sent to me had only been perused. That tends to happen when you have an energetic and rambunctious four year old, but I appreciated the many sneak peeks they had provided showing 1896 New York in full splendor. I was also excited to see the characters Dakota Fanning, Daniel Brüel, and Luke Evans were going to bring to the screen.

First thing I noticed is the cinematography is visually brilliant.  The tone they set with a policeman walking the beat in the snow, only to find a severed hand peeking up through so gently, to drive said man to look up and get a single blood drip.  I thought to myself, “God, this is going to be good!”  The banging on light poles to reverberate through all of New York to hear is the battle cry that something is deathly wrong.   We then meet Dr. Laszlo Kreizler.  He is our Alienist.  An alienist is, as we are told in the first frame of the premier (which is also a note at the beginning of the novel), “Prior to the 19th century, persons suffering from mental illness were thought to be ‘alienated,’ not only from the rest of society but from their own true natures. Those experts who studied mental pathologies were known as alienists.”

Kreizler sends Stevie, one of Kreizler’s inside circle to fetch John Moore, Kreizler’s friend. He brings John to the scene of the crime, which happens to be high above on the “new” bridge where we meet Commissioner Theodore Roosevelt.  Yes, that Theodore Roosevelt. We find out that John works for The New York Times, not as a report but as an illustrator.  The murder of Giorgio Santerelli, a teenaged male prostitute who wears girls clothing, is presented to him. Giorgio’s eyes are gouged out by birds. Entrails on the outside.  Hand is severed, as we already know from the opening scene.  John illustrates what he sees.  When her returns to show Kreizler his findings, Kreizler in his coolness compares his sketches to a renaissance picture, he wants to know what John really saw.  John’s response is that it is burned in his mind and something he will never forget.  We also find out that Kreizler runs a special school for children with “issues”. We also find he had two students Benjamin & Sophia. Both met an unfortunate end which is why this new murder is something Kreizler needs to be a part of.

Moore & Kreizler go to see the suspect Moore mentions in their last discussion. Kreizler interviews him. This is his specialty as an alienist, to get the person to trust in him enough to spill what it is that is truly bothering them.  Kreizler knows immediately he isn’t the killer. This man stabbed his friend.  He was so close to him, he could see the color of his eyes, green eyes. This was a crime of passion.  The suspect could not tell him Georgio’s color.  Which means this man, although capable of a horrific crime, was not the one that committed this other horrific crime.  Moore and Kreizler make their way to speak to Commissioner Roosevelt.  What made me smile during this part, was first, the way the police were out talking with the press, reminded me of many a press conference even in present day.  The old police chief, brilliantly cast, is played by Ted Levine, of Silence of The Lambs fame.  He just oozes corruptness.  Which is what you sense from the entire force.  The press enamored by their confidence gets immediately sidetracked once Dr. Kreizler shows up.  Moore and Kreizler are there to see Roosevelt.

This is where we get our first look at Dakota Fanning as Sarah Howard, secretary of Commissioner Roosevelt.  It seems she is old friend’s with John Moore, or at least family acquaintances. She is also a fan of Dr. Kreizler. We also find out that all three, Moore, Kreizler and Roosevelt went to school together. They unfortunately have to tell Roosevelt he doesn’t have the right man for the murder.

Moore approaches Sarah to steal a file. We find out its not for the Santerelli murder but the murder of Zweig children, Ben and Sophia, who were in Kreizler’s care.   She says no, she won’t put her position at stake for him or anyone, including Dr. Kreizler.  We see Sarah handle herself brilliantly in the precinct. She knows she needs to be strong and still be a lady, she is the first female to work for the department. She doesn’t hold back (I’m not going to further, you need to watch this scene to truly understand how fantastic it is and how wonderful Dakota is playing Sarah).   All I’ll say is she is a bad ass Victorian woman, and I am here for her.  Once Sarah goes home, we see she lives alone but is well to do.  She has taken the file but looks at its contents herself first. There is a scene of her  smoking and it reveals so much without her saying anything.   She then gives it to Moore after she finds him coming out of a upscale brothel. This story I’m sure will continue to unfold.  Moore has a certain diamond ring I have many questions about. Which I feel we’ll find out further into the run.  Kreizler then views and says there’s nothing in it. Dead end or miss managed investigation?  We shall see.

In the meantime, after not finding what he was looking for in the case file; Kreizler exhumes the two caskets of the Zweig twins from the cemetery.  Commissioner Roosevelt quietly, as to not alert the rest of the department, sends over two brothers, Marcus and Lucius Issacson to help the investigation and to look at the exhumed bodies. These characters I have no doubt will give us more as we get further into the story.  As will Sarah Howard.

Dr. Kreizler also gets a visit from the twin’s mother. She blames him for her children’s deaths.  From the look on Kreizler’s face after this interaction, I believe he blames himself as well.  Which is why he’ll not stop until he can link these murders and why he’s so determined to solve Giorgio’s murder.

We are given a chase sequence, which I can only describe is being right there running with Kreizler and Moore.  I keep using the word brilliant, but my god it is, the cinematography is so well used throughout, but especially with this particular scene.  When Kreizler arrives at a dead end, we see that what was left inside his carriage, a crumpled up newspaper containing Giorgio’s tongue. 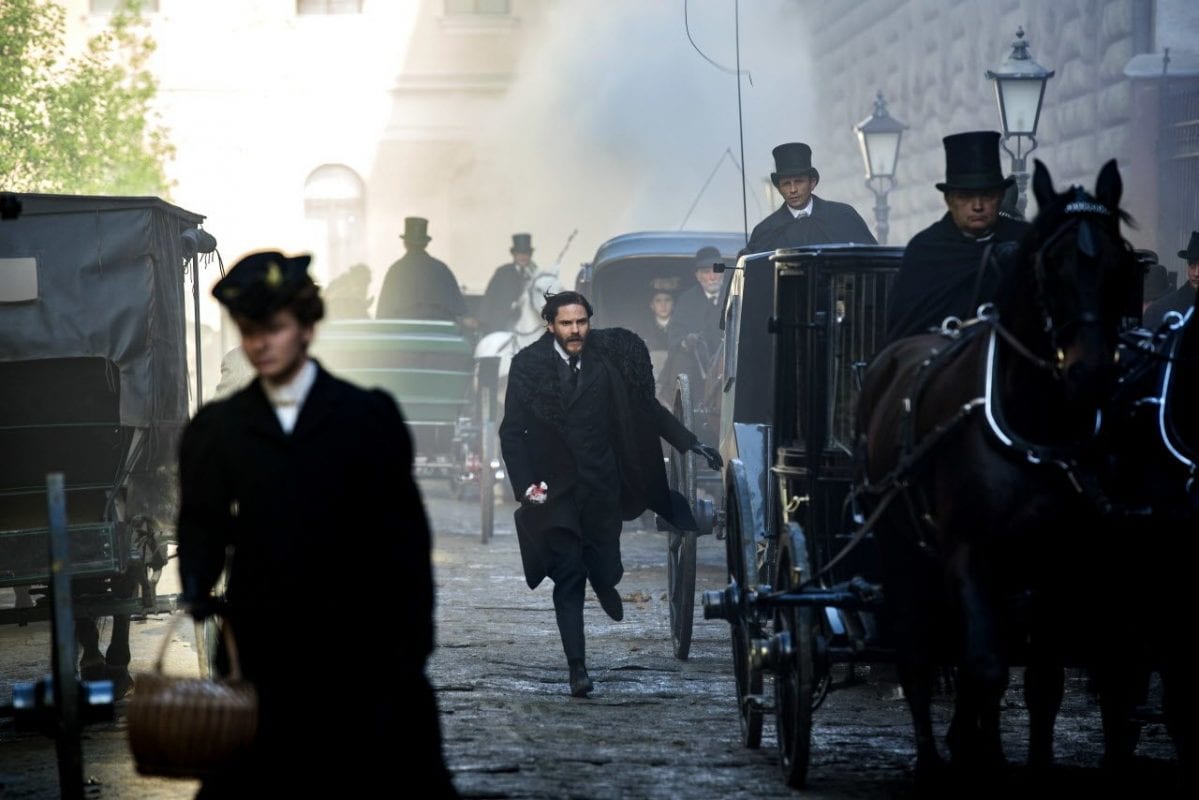 We end with a scene in which  Kreizler is telling his housemaid, Mary,  he has to get into the mind of the killer to truly figure out how he feels and what steps he’ll take next. The framing of this scene, watching Kreizler get more intense with his intent all while cutting toward someone in the first person searching and seeking out their next victim in the slums of NYC, had me on the edge of my seat and wanting more.

The Alienist premiere lived up to the hype and then-some.  It was exciting, suspenseful, and unnerving.  It was exquisitely acted.  Bravo, Dakota, Daniel, and Luke!  I don’t know if I can wait an entire week for the next episode.  I hope you continue to follow along with me.  Until next Monday!