If you haven’t seen Black Mirror, well, I’m not sure why you’re here. If you have, you know it is arguably one of the most important and thought provoking shows of our era. 25YL is proud to feature analyses of each and every episode. Here, Caemeron Crain digs into Black Mirror S3E3, “Shut up and Dance.”

There is nothing in “Shut up and Dance” that is not possible right now. The technology involved, from hacking into someone’s webcam, to tracking the GPS on someone’s phone, to the drone, is all already present in our world. As such, the episode is of a piece with Black Mirror’s inaugural offering, “The National Anthem.” It explores the dark ways in which such technology can be used, and is also a story about coercion, if in a fashion that is almost the inverse of the previous entry.

The story centers around a teenage named Kenny. He comes home from work to discover that his sister Lindsay has borrowed his laptop, which is now infected with malware of some kind. Apparently it still works well enough for him to be able to download some “anti-malware” software to run, so it is not entirely clear whether it was the initial problem, or the “solution” that leads to what happens next.

He makes an excuse to leave work right after he arrives for his shift, in order to comply with the initial instructions. He meets a man who gives him a cake he is to deliver to Hector, and we slowly learn that each of these other parties is also being manipulated in the same sort of way. Hector has been cheating on his wife, for example. 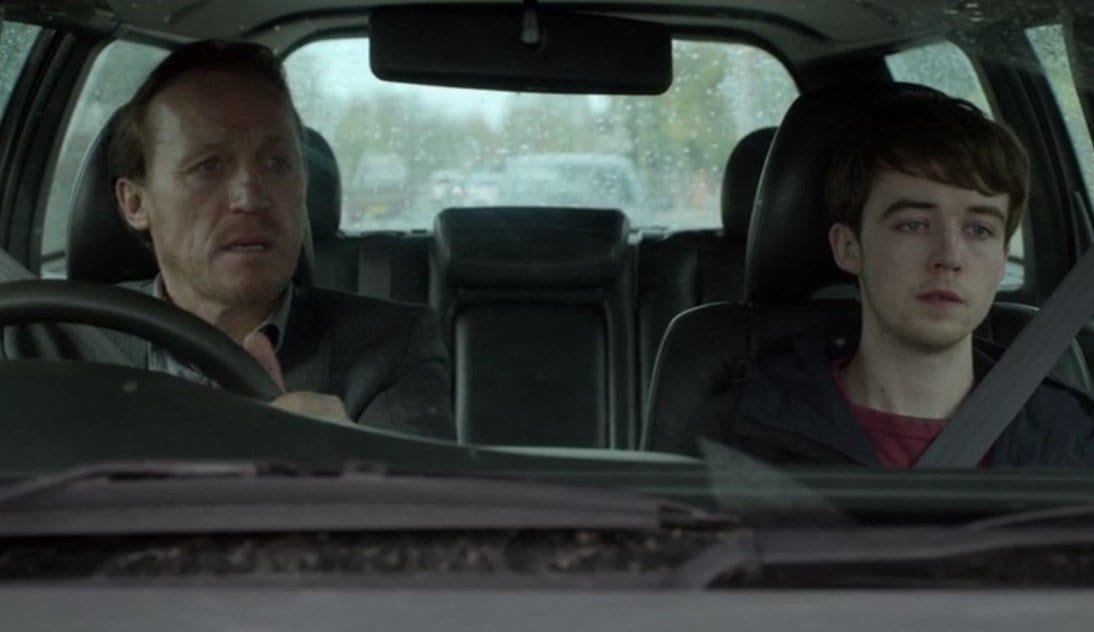 The two are ordered to drive to a bank, and then to rob it. Inside the cake are a hat, a pair of sunglasses, and a gun. Kenny insists that he can’t do it, but Hector persuades him, painting a picture of what it would be like if everyone he knew saw the video of him wanking it. And, so, Kenny enters the bank, shaking, and does the job (though he also pisses his pants).

Kenny takes out the gun and ultimately tries to kill himself with it, but, of course, it is not loaded. The two begin to fight, and it would seem that Kenny wins; although the fight itself is not really shown to us. We cut to him walking, bloody and disheveled, after the event. 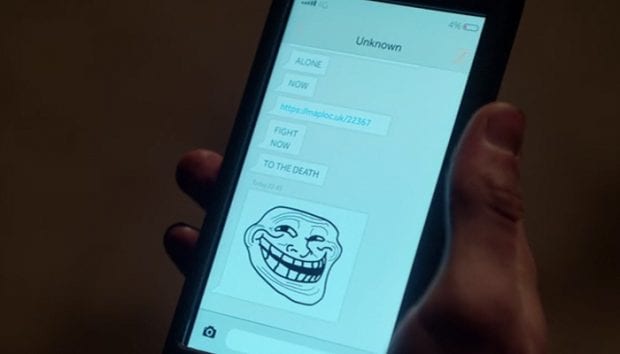 Thus begins the climax of the episode, as Radiohead‘s “Exit Music (For a Film)” begins to play, and each person who has been blackmailed over the course of the episode gets one final text message that is just trollface. The damning information on them has been released anyway. Hector’s wife knows that he cheated on her with Mindy. Kenny’s mom calls him and begs him to tell her it isn’t true that it was kids. And the episode ends with the police rolling up on young Kenny; not just because of the kiddie porn, but because he has now also robbed a bank and (presumably) killed a guy.

Perhaps there were some viewers who foresaw that the “twist” that Kenny was masturbating to child pornography. The episode is smart, however, in withholding this information for as long as it does. For many of us, the prospect of being filmed performing such an act might seem like the worst-case scenario when we are faced with the possibility of someone hacking into our webcams, or, at least, the most likely one that would potentially have consequences. Further, the fact that Kenny is a teenager makes it plausible that he might be as concerned as he is simply about this itself. As an adult, the prospect of everyone one knows getting such a video is pretty terrifying; as a teenager, it could well seem to be world-ending. Yet, there is also a sense of mystery, as Kenny goes to increasingly extreme lengths to keep the video from being released, which makes this play less as a twist, and more as an answer to a question in the viewer’s mind.

The fact that he was looking at kiddie porn, then, serves to add a wrinkle to our ultimate judgments with regard to the overall story. After all, there are few things that people seem to have such a visceral response to. In my previous piece, on “The National Anthem,” I explored the question of the immorality of bestiality, pointing out the extent to which our moral disgust there seems somewhat hard to warrant on the basis of dispassionate reason (but exists, nonetheless). In exploring pedophilia, then, “Shut up and Dance” can once again be seen as a companion piece to the former.

But our condemnation of child pornography is on more solid ground. The Supreme Court has decided that it is not protected speech on the basis that the very creation of the speech is criminal. Legal complexities may arise when it comes to the creation of virtual images through manipulation, or child sex robots, and one could well imagine Black Mirror exploring that terrain, but that is not what is at stake in “Shut up and Dance.”

Rather, if the episode asks a question about our moral judgments with regard to the issue, it would be one about those who consume child pornography, as opposed to those who create it. We are thus in the space of thinking about how we judge others for their perversions (and not just their actions).

I don’t mean to seem sympathetic to a pedophile, but Black Mirror forces a certain level of sympathy with Kenny. As with “White Bear” it is important that we are given a protagonist to identify with, and the information pertaining to his crime later. If we had known from the get-go about Kenny’s proclivity, we likely would have felt little to no sympathy for him, but since the episode proceeds through his point of view I would contend that one cannot but do so. If one wants to go meta, one might suggest that Black Mirror emotionally manipulates us in a way that parallels the manipulation onscreen. But the deeper question becomes whether knowledge of Kenny’s crimes erases whatever empathy we may have felt.

1) How much does, or should, learning of the misdeeds of a person retroactively affect our judgment of them?

Kenny’s story is not about punishment, however. There may be some who would contend that what he is subjected to is deserved because of what he did, but that is not the point, or the question, here. Fundamentally, “Shut up and Dance” is about trolling. It is about the pleasure taken by the internet troll. As is indicated by the title, the whole game is most essentially about providing a certain kind of entertainment for the unknown party behind the manipulation.

It would seem that the true joy of trolling lies in such manipulation. This is why there is no winning when one engages with an internet troll in a comments section. Their whole raison d’etre is to provoke an outraged response. It is not about expressing a view that they actually hold, so much as it is getting a rise out of us that they are after. To respond to the troll is to feed him. It is in this sense that what happens to Kenny and the others presents us with the quintessence of trolling. Their manipulator is not trying to teach them a lesson, or carry out justice—he is just in it for the lulz.

2) What is the appropriate response to the troll; or, for that matter, the blackmailer?

In many ways, trolling itself seems to have only come into existence with the form of the medium that enables it. What lies behind it? A certain sense of humor? A desire for power for the sake of power? A desire for power in light of a world that increasingly seems absurd and meaningless? Is this about nihilism?

Even if the structure of the episode leads one to see things from Kenny’s perspective, one cannot help but wonder whether there were those who watched it and identified with the anonymous blackmailer. We cannot deny that such people exist in the world; indeed, we should each perhaps recognize the extent to which this tendency may exist within ourselves. As with its inaugural episode, “Shut up and Dance” finds Black Mirror asking us to reflect on some of the darkest corners of the human soul.