Oh, what a tangled web we weave; when first we practice to deceive! – Sir Walter Scott, Marmion, Canto VI, XVII (1808)

One might add to the famous quote from Scott that perhaps things go even further, once one has committed at least one murder. This is what occurs in “Crocodile,” as Mia is led down the path of engaging in more and more heinous crimes in an attempt to cover up the first one.

Her culpability in that inaugural event may be up for some debate. As we see in the first scene of the episode, it was Rob who was driving (drunk) and hit a man on a bicycle. Mia wanted to call the police, but he persuaded her not to do so. Was she coerced? Regardless, she helps him dispose of the body.

How great of a crime is this? Certainly there would be legal repercussions if it were discovered, but the moral dimension is slightly murkier. It is true that we tend to care, as human beings, about what happens to the bodies of the dead. What is somewhat less clear is why. Can a dead body be wronged? If there is an afterlife, then surely the soul of the person would already have passed on. If there isn’t, well, then the corpse is just inert matter, isn’t it?

Once again, Black Mirror hits on a moral sentiment that seems less than well-grounded on the basis of dispassionate reason. And yet, we do think it is immoral to desecrate a dead body, or dispose of one like garbage. Is it because we still see the image of the person in the corpse, or is some deeper notion at play? Does this depend on religion, or is there perhaps something here that gets to the essence of what leads human beings in the direction of religion in the first place? After all, there would seem to be no human culture that truly thinks the treatment of the dead to be unimportant. On the contrary, this is the stuff of Greek tragedy.

Of course, there is another aspect to all of this, which is what leads Rob to feel immense guilt 15 years later; the man’s wife never learned what happened to him. Such a possible consequence is enough to ground a law against what Mia did as a complicit party to the disposing of the body, even if our moral sentiments may involve factors that go beyond this. 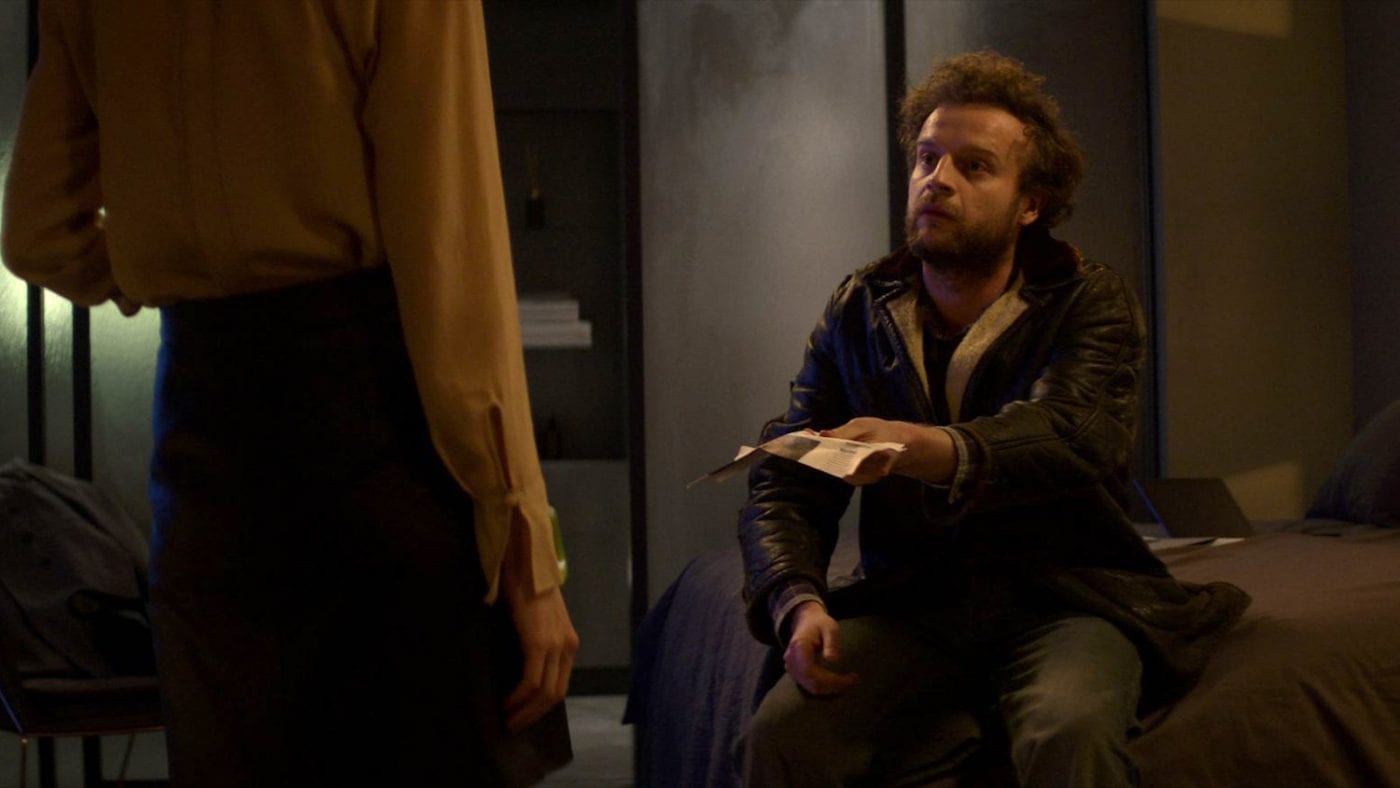 At this point, Mia is a successful architect with a husband and son. Rob, on the other hand, is nine months sober, and feels the need to make amends. He wants to send a letter to the wife of the man he ran down, just so she’ll know what happened. He says that it will anonymous, and he won’t name Mia, but she insists that they will trace it back, and begs him to think about the effect this might have on her, and her family.

Killing Rob over this may seem to be a wild overreaction — and certainly it is in moral terms — until we learn of the central bit of technology introduced in “Crocodile.” This is a device that allows the user to read the memories of a target. And, although Mia seems to be unaware that this is now being used by insurance investigators when Shazia pays her a visit, that same scene indicates that she knew of the technology being used by the police.

This serves to make her killing of Rob at least seem a bit less paranoid, and does raise a question as to the unintended side effects of a device like the Recaller. Those same effects are played out as Mia commits further murders over the course of the hour, with a cold-blooded rationality: if anyone has a memory that could lead to the discovery of her guilt, she must kill them.

The other lead in this episode — Shazia – is an insurance investigator who uses the Recaller device to help her try to discover what happened when an autonomous Fences pizza van ran into a man on the street. She primes the memory of each person she talks to by having them smell a beer — because there is a brewery in the area of the accident — and having them listen to “Anyone Who Knows What Love Is,” which had been emanating from a passing car. She notes that the memories she can glean through the device are subjective; thus the idea is to gather multiple perspectives and put them together in an attempt at discovering the truth.

This relates to what is (objectively) the dumbest part of “Crocodile” — the implication that it is reading the memories of a guinea pig that leads the police to catch Mia. My only defense of this is that it is not explicitly confirmed; we merely see the cops preparing to try to read the rodent’s memory, and then cut to them closing in on Mia. I prefer to believe that they caught her in a more conventional way, because while I am no expert on guinea pig memory, the show itself had already established that even human beings might need to be primed with sounds and smells to get their memories going. Are we to imagine that the guinea pig just records images and such priming is unnecessary?

Regardless, Mia ends up killing a number of people. She kills Shazia after it becomes clear that she has seen something in her mind, and the excuse that she sometimes thinks strange thoughts is clearly not working. Before killing her, she uses the device on Shazia to determine if anyone could connect Mia to her, and finds that Shazia’s husband Anan could do so. So, after killing Shazia, she heads to her house and kills Anan, and then their baby, whom she thinks has seen her after the act. (Of course, we are ultimately told the baby was blind, which also feels cheap to me.)

While it is mostly a thriller that moves from one murder to another, “Crocodile” does raise some questions with regard to personal privacy. Would it be justifiable to read the memories of witnesses to solve crimes? To help settle insurance claims? Some may respond affirmatively to the former and negatively to the latter, but Black Mirror is right to suggest the possibility of a slippery slope with regard to the issue. (One need look no further than the ever-increasingly use of instant replay in sports.)

Shazia informs Mia that her compliance is legally mandated, though the episode does not explore precisely what would have occurred had she refused. Would we be comfortable with a law that allows investigators such access to our minds? While the technology to read people’s memories does not currently exist, questions that are largely analogous are emerging with regard to devices like the Amazon Echo.

Prosecutors in Arkansas have already attempted to gain access to someone’s device in search of evidence pertaining to a murder case. Access was ultimately freely given by the suspect, and the charges were dropped, such that no legal precedent was set by the case, but it would seem to be only a matter of time before something occurs to bring the legal question to a head. After all, these devices are always listening. (And, if you’re taking comfort in not having one at the moment, let’s not forget about our smartphones.)

Of course, Mia’s crimes are heinous. She kills Rob because he was trying to do the right thing and make amends. She kills Shazia for doing her job, and then Shazia’s husband and child simply for being such, more or less. Nevertheless, we can see the toll this takes on Mia throughout. She does not kill because she wants to, but because she feels that she must in order to protect herself, and her family (which makes the use of Irma Thomas’ song as a leitmotif throughout the episode darkly apt.) In a world where investigators can read memories to solve crimes, there is certainly an argument to be made that Mia acts out of rational self-interest (and should have just been sure to kill that guinea pig, too).

She also cries a lot, but it is clear that her tears are for herself and not her victims. That is, if she is sad, or distraught, it is about the mess she has found herself in. It is in this sense that she cries crocodile tears; they may not be insincere in relation to her, but they certainly are in relation to those she kills. (It is also worth noting that the phrase itself derives from the belief that crocodiles cry while consuming prey, which also neatly parallels Mia’s actions.)

It is tempting to suggest that the events of “Crocodile” reveal that Mia was actually some kind of psychopath all along, but this risks letting the rest of us off too easy. Rather, we should ask to what lengths we might go if we felt the lives we have established for ourselves to be under such a threat. We might like to think that we wouldn’t start killing people — and hopefully most of us wouldn’t! — but is there perhaps something all too human in the way Mia responds? What do we see if we allow ourselves to look in this particular mirror?