“Here is wisdom.
Let him that hath understanding count the number of the beast, for it is the number of a man, and his number is Six Hundred Threescore and Six.
Son of Night, you are given authority over the Earth.

You will kill by the sword – By famine – By plague – And through wild beasts.
– You will lead astray – all nations of the Earth.
Your name is Death, and Hell follows behind you.”

Today is the 42nd anniversary of The Omen. June 6, 2018, the perfect occasion for a look back at the film and its television successor, A&E’s Damien. Easily summed up in one sentence, Damien is the criminally underrated direct sequel to the unforgettable 1976 Richard Donner’s The Omen. Set in 2006, the show follows thirty year-old Damien Thorn (Bradley James) as his life is once again turned upside down. The greatest strength of the original film was always the uncertainty it lent, not only to the characters within the narrative, but to viewers as well: is Damien Thorn the Antichrist, the Beast, The Destroyer? Damien’s strength lies in perpetuating that uncertainty, to a degree, but also in the direction it takes with such a question.

In The Omen, it is Robert Thorn, Damien’s father, for whom the question is the most pertinent. His only dilemma lies in either believing it and killing his child, or disbelieving and potentially allowing the Antichrist to live undiscovered and protected on earth. Was everything merely coincidence? Did paranoia and enablers twist Robert Thorn into believing the worst of an innocent child? Or did a pious man die a horrible death attempting to rid the world of a great evil? There are no answers, nothing concrete at least, save the terror-inducing smile of a five year-old boy at his parents’ funeral. But is it sinister, truly? Or has the audience also been manipulated into thinking the worst? It is no wonder the film did so well, as it is this uncertainty which is truly terrifying.
In Damien, which thankfully disregards all the attempts at sequels (and remakes. Why? Just why?) over the years, it is Damien himself who is subject to this great uncertainty alongside the audience. By the end of the show, it is revealed that Damien is indeed the Antichrist, but only by the end. The doubt lingers on throughout, but the questions that arise as a result of knowing are those most worth pursuing. If Damien is the Antichrist, is it he who is causing these terrible things to happen subconsciously? Or something else, sinister and lurking? And, if it isn’t Damien, what is it that makes him so evil, when he clearly wishes nothing but good?

While this gives way, not to the show’s greatest strength, it is certainly the show’s greatest success. How does someone compose a narrative where the main character is the villain and keep him sympathetic without reducing the nature of the villainy? This is less of a nature vs. nurture question and rather more of a free will question. We can’t be sure of anything concerning the people involved in Damien’s upbringing, considering they were all a part of the cult, and those others who might speak to it are murderously insane or dead. Only Amani provides positive insight into Damien’s past, detailing how he saved Amani’s life in the field. Quite the contradiction.

Damien is surrounded constantly by death and violence, from his birth until the end. The ‘birth mother’ jackal, the hospital in which he was given over to the Thorns. His governess and his parents, the people who aided his father, schoolfellows, etc. And then he pursues a career in war photography. Are the deaths the result of him being there? Does he cause them? Is he “Death” with hell following behind? Or does Death follow him?

It is more than clear that, even though Damien wanted Kelly to go, it was primarily for her protection. He was afraid that by being around him, she might die. He tried to save her and she tells him that she can feel something pulling her under. It is the continual deaths that occur around him and his inability to prevent them that eventually drive Damien to the brink. Though Damien gradually regains his memories of his childhood after his baptism by blood in Damascus, it does not change his personality. This element is, of course, key to Damien’s continued doubt regarding his designation as the Beast – none of the people who die are people Damien really wants to die, at least at first. He is someone who very much cares about the well being of others. He refuses, initially, to document a dying vet’s suicide, saves that same man’s child from being hit by an oncoming subway train and attempts to keep a man from stabbing himself with a scissors, among other things. He tries and occasionally succeeds in doing good things. The bad things which happen he abhors: the people he can’t save, the murders and suicides which people commit in his name. In fact, his first violent outburst is in direct reaction to such an atrocity.  When he speaks with his therapist, Damien asks whether or not it is right to rid the world of that which is evil; his therapist (before she goes insane and commits a murder suicide in Damien’s name) counters by asking if that is for man to decide, and suggests that simply by asking the questions he is, by wanting to be better, Damien is ‘human’.  Perhaps it is his unwitting power, perhaps it is something else, the other mysterious ‘protective measures’ that Rutledge alludes to, which cause these things to happen.

Under what circumstances must we hold Damien accountable for the unnatural deaths that happen within his proximity? The question of whether or not he is the Beast we must put aside, and instead recognize that, even if he is the Antichrist, there is still a measure of doubt as to how and why these terrible events keep occurring.

Does Damien have any other choice, but to be the Antichrist? Does Damien have the free will to choose not to be what he is? I suppose this depends on one’s perspective. Ann Rutledge says that Damien isn’t a man, and yet, the Bible specifically states that 666 is “the number of a man,”. If Damien is a man, it stands to reason that he ought to have free will, and thus ought to be able to choose between the destiny predetermined for him and any other path. Yet, if Ann is right, if Damien’s parentage precludes his humanity, he has no choice but to succumb. I would argue that his proclivity towards compassion, his desire to be good and his ultimate failure is what makes him human, parentage aside. But then, should not his humanity or lack thereof determine how his fall into darkness is viewed?

Is Damien truly a victim in a sadistic play of destiny, without the free will required to turn away from his dark path, sliding instead into the inevitable evil of the position carved out for him in the book of Revelations? Or is he simply fallible like the rest of humanity, and, despite free will, manipulated into following his path because he believes he has no other choice, when in reality, he might have simply been able to walk away? Does he have free will, or merely the illusion of it?

This is the question which the audience wrestles with, even as Damien descends to his throne, as it were. The show, despite receiving acclaim for James’ and Hershey’s performances, was derided for not fitting into the genre it was supposedly meant for, but there is a difference between physical horror and psychological horror. It is the unknown which most frightens us, and if you can’t trust your own mind, what can you trust? Everything, as a result, becomes the unknown, and, like Damien, you are forced to wade blindly through life, unsure of your every move. What makes Damien just as frightening as its predecessor isn’t the blood or the jump scares, it is Damien’s journey which is truly terrifying. To become something he desperately doesn’t want to be, the outcome seemingly unavoidable as the people around him manipulate and take advantage of his fear. This is true terror because it actually happens. In real life.

As a viewer, the difficulty is twofold: in encouraging the audience to care about Damien, to see him as the hero or antihero rather than the villain, we want Damien to have it all. We want him to do away with his aggressors at Armitage Global, on the police force, in the Vatican, because we know Damien, know that he doesn’t want to harm, and yet they are still manipulating him, attacking him. But we also want him to have peace, to be free of it all. Unfortunately, he can’t have both. In taking down his opponents, he must assume his power, as his only other out is to die, which simply isn’t possible. Ultimately, it’s extremely satisfying to watch Damien claim his heritage, to take control and at the same time, have it be wrested away as he gives in.

Damien is a tour de force, impossibly depressing to watch, but finally the thoughtful sequel the The Omen deserved. Previous attempts have indulged in the total depravity of a Damien fully and unflinchingly immersed in his role as the Antichrist, but A&E’s turn wrestles with human nature at its most basic concept and has created, to alter the well worn phrase, sympathy for the (son of) the Devil.  When the Beast of the apocalypse is more a man and men more the beasts, what does that say about humanity? Albert Camus once said “A man without ethics is a wild beast loosed upon this world.” I’m not entirely sure that it is Damien who is the Beast. 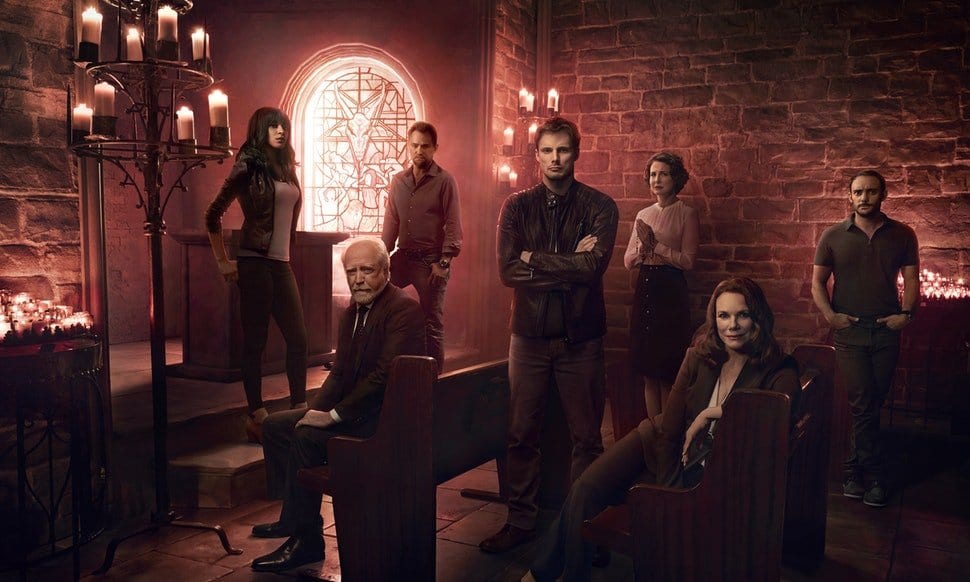