Episode 6: “Not The Only Freak in Town”

My biggest regret for The Innocents? It’s that the staple of genre-TV, the evil twin/doppelgänger/long lost sister/evil leaper/rogue slayer, etc., etc., was played way too early. It makes sense for the overall narrative, but for this show — it’s a shame to play the card so soon. It totally works, so there’s that, but I wish the show was already going to a second season so that they could have held on to the fascinating idea for longer, and played it for all it’s worth. There’s a tonne of great material to be derived from the confrontation here…

Anyway I digress. Episode 5 is easily the best of the season.

So it turned out that the YouTuber who offered to help June to understand what was happening to her, was indeed able to help (and was amazingly in London too — and I thought they were miles away… Lucky for June)…  Sort of. The tension from the meeting, and the subsequent journey that June and Harry take with Kam and her put-upon boyfriend Andrew, was very well played. The darkness of Kam’s life, and the desperation that was hidden behind her confident use of her shifting ability, was a brilliant diversion for June and Harry and ultimately a breaking point in their new found freedom. What a great use of background songs too, with the chorus claiming that “…she’s got control” (“Midnight Magic Woman” by The Flying Burrito Brothers) playing out during Kam’s persuasive sincerity that she is now June’s family; then the dimly lit journey into darkness at the club Kam used to work at (and now enjoys as a patron); the disturbing morning after between June and Harry/not Harry (without spoiling too much!) — brilliantly realised by cast and crew both.

Back “up North,” realisations snowball and tensions reach a breaking point. Harry’s detective mum Christine, knows something is amiss but the piece of the puzzle so integral to her understanding is denied her at a vital moment, losing her only lead in the mystery and earning her a suspension from her job. In shows like this, breaking the rules to do what is right is typically overlooked, but not here. This series is grounded in as much realism as possible and consequences are not ignored.

So it makes sense that, once rejected under a false assumption, Harry returns home to try and piece together his thoughts and to challenge John with the knowledge he’s gained about John’s wife/June’s mother, Elena. The story becomes clearer for the viewer (although the final reveal of what happened to the Pennine Five will come a little later, brilliantly realised) and all the disparate elements begin to coalesce. Even if the story is slight in terms of the original through-line (June and Harry running away to “become who [they] want to be”) it’s complemented by the surrounding obstacles and revelations. Each actor has a part to play in this larger storyline, luckily enough.

The successes of this series are in those characters and their performances. As I mentioned previously, everyone gives it their all and delivers convincing, real people in the centre of things they don’t understand or are trying to weather. What I will say is that the one person who should have been given more of a voice is June. It occurred to me that she’s buffered by circumstances and opinion but doesn’t appear to own common sense. She often refuses to hear a view that could help her, or resists Harry in a way that divides the two of them — he becomes the stronger, layered character and she becomes a sheep following the adults who seek to manipulate or control her. This was the very thing she sought to escape in the first episode. It’s a shame — if there is to be a Season 2, she needs to be given her own agency, but also time to explore her thoughts and feelings on making these life-changing choices. We should sense her struggles, invest in her confusion, and wish the best for her. Instead I sat there wondering why she had simply accepted Harry had left her at Sanctum; that Halvorson was all of a sudden to be trusted; etc. This is not to say that Sorcha Groundsell does a poor job — far from it. But she is given less to work with than Percelle Ascott (Harry) or many of the adults (Ryan, June’s brother, is particularly effective for instance, given his side-role, because the script gives him opportunities and strengths to play with that are grounded in a well-defined and multi-faceted character).

There are some cracking scenes involving the younger cast members: Harry and John’s heated exchange(s) soaked in the mutual need to protect or make amends; June’s first meeting with her mother out on the lake; John’s truthful admission detailing Elena’s reasons for departing the family home and Ryan’s reaction. When the circumstances present themselves, each rises to the occasion.

All of this is snowballing to one destination — Norway. In the end, all characters will end up there for the final confrontation, as it were. And it’s here that the show maintains its curious intimacy despite the opportunity to “go large” and make this a let’s-guarantee-a-second-season-explosion-of-shifting, violence and one liners. The gang is all here and it’s going to get a little messy.

But it’s the adults who ultimately own the end of this series. Their stories became the more interesting, tied up in the central premise of the show and the backstory that becomes front and centre towards the climax. Elena’s past is explored in a clever, dramatic set up with her daughter as a direct witness; the idea of giving up on love because of the inevitable (metaphorical) destruction it causes due to her shifting is a fascinating angle that could have been expanded on (especially as it places her at odd’s with June’s declaration “I will have love! I’m not you!” — their shifting abilities in direct opposition to each other’s triggers (love or fear).

As for Dr Halvorson — yep, I guessed right about you sir! There was always something off, something controlling and calculating about him. Yeah, I know that by the end we might feel some sort of empathy for one of his goals, but he was misleading and evasive with everyone, even those closest to him. And then in this batch of episodes, from his clever manipulation of Sigrid via her previously recorded sessions (why did he want to keep her there? Did he have other plans?) through to the emotionally brutal treatment of Steinar — he had his schemes and no one was going to interfere. Well played though, Mr. Guy Pearce. You were never just an out-and-out villain in tweed.

However it was another adult character, Runa, who turned out to have the strongest, and most emotional, of stories, and in one of the final images of the series I found myself wondering more about her future than many of the others. From our initial experiences of her, the closed-minded, seemingly cold and distant co-author of the restrictive rules and regulations at Sanctum, the narrative wove a strong and ultimately poignant web of love, misjudgments, and cruel twists of fate. I guess there is a lot of strongly written TV out there that has you believe that a character is demonstrably a one-track personality and you think you have them pegged — but in fact, you were mistaken and the facts presented were never the complete picture. The ending for her, whilst not undeserved in many respects, still saddened me — and I think that marks good direction and even better acting. 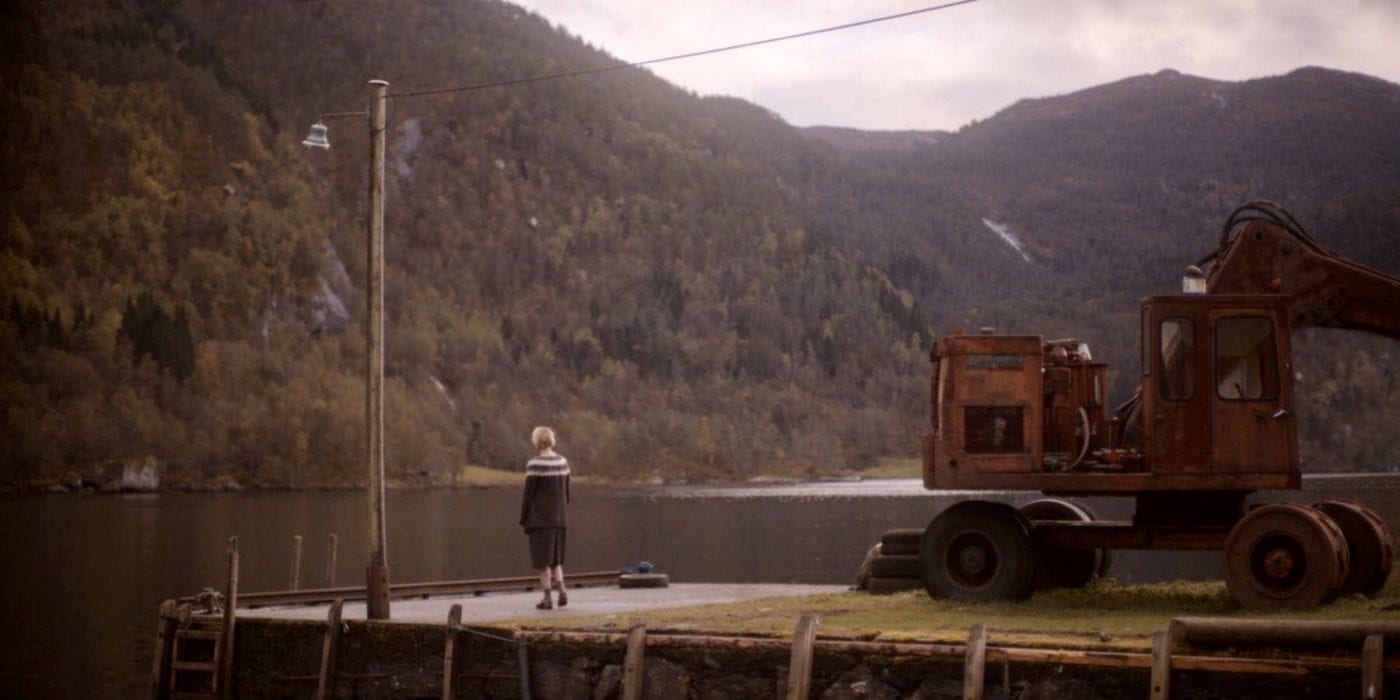 The work “behind the scenes” also deserves praise: the cinematography of Norway and how warm and welcoming it appeared for June (compared to the cold and grey scenes we had before her arrival) was a clever touch; the dimly-lit confessions that take place (as if afraid that bringing them out into real daylight would be too much for the people involved); the outstanding use of songs throughout (rivalling Buffy The Vampire Slayer (“Sugar Water”, “Wild Horses”, “Pain” etc) or Six Feet Under (“Let’s Go Out Tonight”, “Breathe Me”, “Waiting” etc…) for well chosen, resonant-to-the-narrative tracks; the gentle inference of a cult being built at Sanctum through the outfits the women wear and the uniformity of Halvorson’s style of dress; the scripting itself and the relaxed approach to delivering the big moments. There’s much to be commended.

So I did enjoy this season but the adherence to traditional linearity was ultimately a little disappointing. I waited for more twists and turns to upset the guessing game I played in my mind — but they didn’t really happen. Yes, there were some clever developments and decent attempts at mystery but if by Episode 7 you can’t guess the ending then it’s likely that you have already decided just to go along for the inevitable ride and locked your brain into a contented 4th-gear.

The Innocents had ideas, ideas that could have been competing or at odds with one another — resulting in a confusion of genres. Instead we had something where ostensibly disparate elements were intelligently blended into a modern take on fairy tale archetypes (controlling parents, a coven of witches, supernatural occurrences, young love, the mistakes of parents and the familial aftermath etc). Whilst not groundbreaking in sensationalist terms, it made for a quality character-based tale of young womanhood, teenage love and sacrifice.

The show does end on a cliffhanger — and it’s a good one. Contrived, yes, but a solid reason for a return in a new season. I hope that, should it get a green light, it pursues the metaphor that shapeshifting could represent — how, as teenagers, we try to find our place in the adult world through “trying on” various personalities and roles. And in doing so, that another season gives June a much stronger voice, and comparable challenges in a larger world.

25YL site Business Strategist, dabbling in Marketing and also a writer here too!

Lover of 'Twin Peaks', all things David Lynch, a big believer that 'Big Trouble in Little China' may possibly be better than 'Bill & Ted's Bogus Journey'.

Oh, and bacon is awesome and I miss Sherbet Dib Dabs.

More From: The Innocents