Locations in Halloween play a crucial role in creating tension, building suspense, and heightening the feeling of dread. Co-writer/director John Carpenter introduces us to the fictional suburban town of Haddonfield, Illinois, before Michael Myers (Nick Castle) goes on a bloody murder spree, ultimately centered on a young babysitter, Laurie Strode (Jamie Lee Curtis). The low-budget indie was primarily filmed in South Pasadena and Hollywood, through there were isolated scenes filmed throughout the Los Angeles County, from Altadena, Alhambra, and Burbank to City of Industry and Sierra Madre. In this article, we will revisit some of the original filming locations 40 years later and talk about how they served to create the atmosphere of Halloween, as well as emphasize the film’s themes.

During the movie’s first half, Carpenter builds mood and creates a strong sense of place and geography, introducing us to a world and its routine by following Laurie and her friends across the town’s streets in long tracking shots. As they talk about innocuous things like boys and invitations to dances, Michael Myers often stalks the corner of an image, blending in with the shadows. In Order in the Universe: The Films of John Carpenter, Robert C. Cumbow writes, “The idyllic calm of tree-lined residential streets and picturesque falling autumn leaves is set off balance by the camera’s insistence upon sneaking around trees and peering at its subjects behind bushes.” Of course, the idea is to tease the viewers, make them uneasy and anxious with the knowledge that he’s always around, watching and waiting for an opportunity to strike. As Carpenter explains on the movie’s Blu-ray commentary, “I love this whole thing: The whole life that these girls had, and the life of this small town, was normal, placid, beautiful, idyllic. It was meant not to be anything evil going on there. Evil came to town.”

The introduction of Michael—less of a character and more of a force of nature in a mythical sense—to this safe, familiar environment causes a seismic shift in the quiet order of life in Haddonfield. A town entirely vulnerable to a creature that cannot be argued or reasoned with, understood or explained, helped or avoided. According to John Kenneth Muir, “The victims of Michael Myers in Halloween do not expect to die at the hands of such a monster because they live in what should be a safe society. There is medicine, science, law, education; there is the security blanket of parental protection. In Halloween, none of those protections function adequately” (The Films of John Carpenter). He goes on to add that the characters are, “unprepared and unable to conceive of a reality that includes so irrational a monster.” The only way to survive, as it turns out, is by keeping one’s awareness.

It’s not hard to see why Carpenter filmed most of the town of Haddonfield in South Pasadena, one of the oldest and most beautiful L.A. neighborhoods. It’s distinctly suburban, small-town friendly and charming, a place where people leave their packages and newspapers outside, without worries someone might steal them. Where people in their houses greet me as I pass by with my camera (which is decidedly not always the case), or express concern when they see me kneeling down in the middle of a street to try to get that perfect shot.

It’s also a neighborhood proud of its horror history. Sugarmynt, a small art gallery next door to Michael Myers’ house—which has incidentally been moved from down the block—hosts an annual Halloween exhibition that includes a public screening. A bench dedicated to the movie’s executive producer, Moustapha Akkad, sits in the library park across the street from the house that served as Laurie Strode’s home. There, a sign on the porch encourages visitors to take one of the pumpkins and pose with them on the street corner like Laurie does in the movie—as long as you bring back the pumpkin! Carpenter even tells a surprised Curtis about this shrine to Laurie during the Blu-ray commentary, then talks enthusiastically of his love for the old tree-lined streets in South Pasadena and the feeling of Americana they evoke. 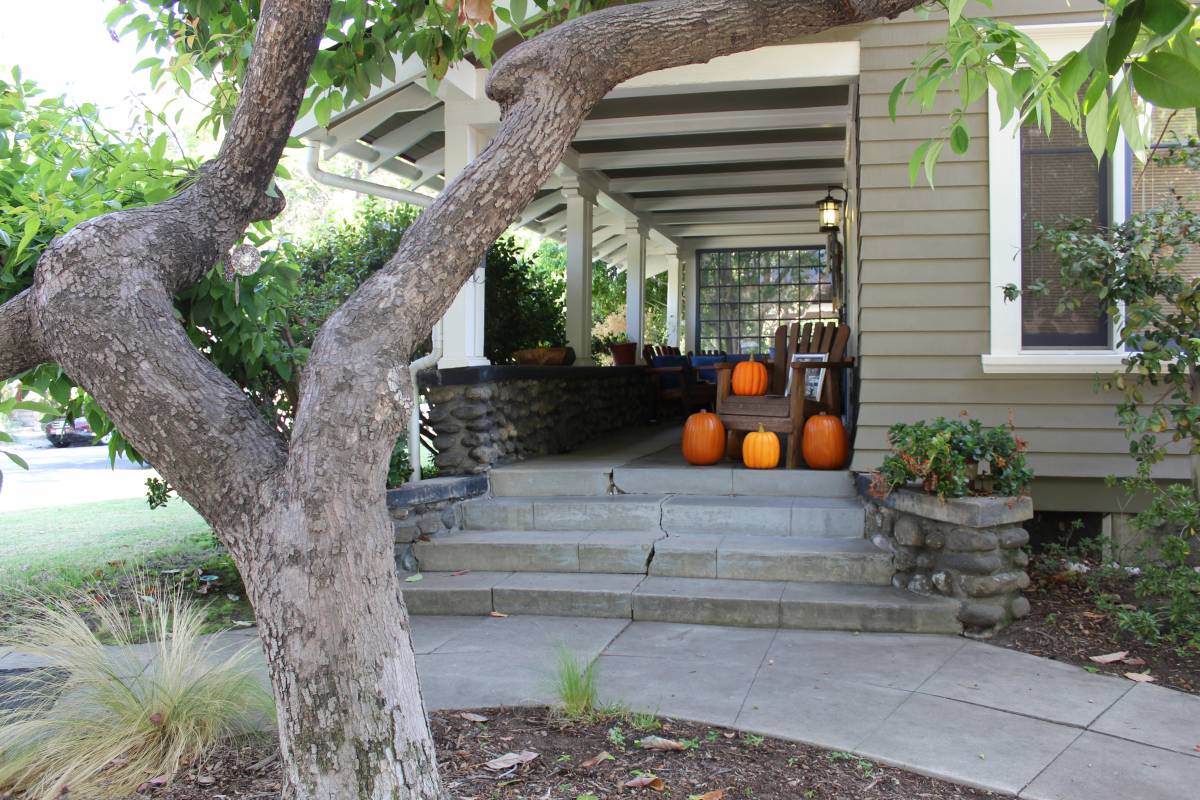 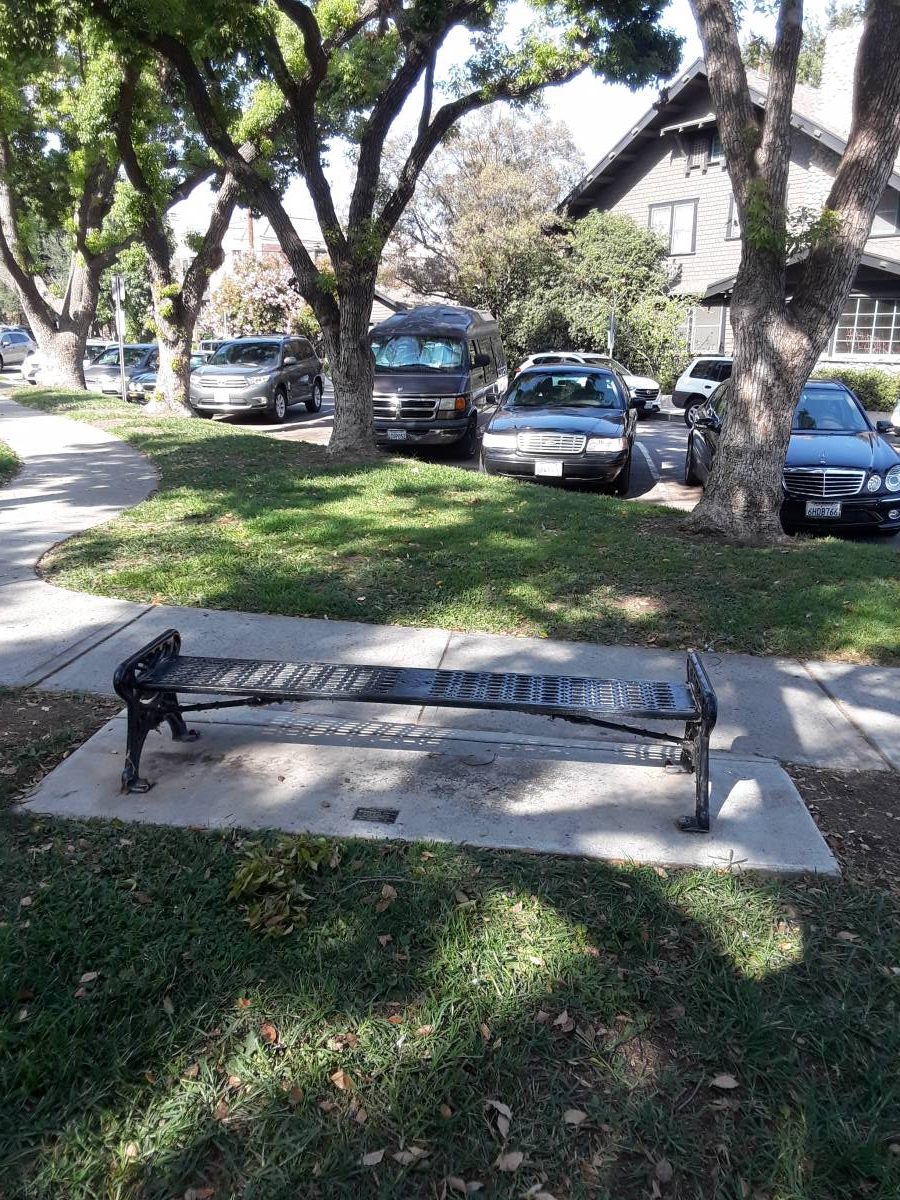 Halloween ends with Michael’s disappearance and an ominous montage of his heavy breathing and the places he’s stalked throughout the film: from the Doyle house, the Wallace place, to the town’s haunted house itself—the Myers’ home, “places Michael has been, places he might be now, places that will never again be the same because he has been there and left his mark on them” (Cumbow). The final shot suggests that Michael is still alive and unstoppable. Muir interprets this montage as a way of establishing the movie’s theme, “that evil can be alive anywhere.” We are left with the bloodcurdling idea that Michael will continue to stalk, to wait around in the shadows, ready to attack at any time or any place. No matter how perfectly manicured your lawn may be.