Author’s Note: This movie has been out for 59 years, so I should not have to post a spoiler alert, but if you have yet to see it (you can find it on Amazon), then spoilers to follow.

I am not what you would call a lover of the horror genre. Let me change that a bit. I want to be a lover of the horror genre, but I am a certified scaredy-cat. That’s when I found a genre or more like a time in horror history that I can enjoy. There was a group of films in the late 1950s that a director by the name of William Castle directed and produced: Macabre (1958), House on Haunted Hill (1959), and The Tingler (1959). For those of you who recognize that name, Mr. Castle also directed the original 13 Ghosts (1960) and was also a producer of Rosemary’s Baby. What Mr. Castle created was an experience in B-horror films; films that at the time were frightening and terrifying, but now just seem comical and over the top. I watched The Tingler for the first time to write this piece and was able to watch it with my mother, who had seen the film in its glory in the theater, the way Mr. Castle wanted it seen.

My mother was 10 years old when The Tingler came out, and she remembers that even before the film started William Castle came on-screen and said the following:

“I am William Castle, the director of the motion picture you are about to see. I feel obligated to warn you that some of the sensations—some of the physical reactions which the actors on the screen will feel—will also be experienced, for the first time in motion picture history, by certain members of this audience. I say ‘certain members’ because some people are more sensitive to these mysterious electronic impulses than others. These unfortunate, sensitive people will at times feel a strange, tingling sensation; other people will feel it less strongly. But don’t be alarmed—you can protect yourself. At any time you are conscious of a tingling sensation, you may obtain immediate relief by screaming. Don’t be embarrassed about opening your mouth and letting rip with all you’ve got, because the person in the seat right next to you will probably be screaming too. And remember—a scream at the right time may save your life.” (The Tingler, 1959)

We didn’t have the same feeling as being in the theater, but it still brought the nostalgia.

She also told me she experienced “Percepto!” first-hand. For those of you not familiar, William Castle had a different gimmick for the movies he made. With House on Haunted Hill, it was “Emergo”—a skeleton with red lit up eyes would mimic the action on the screen during the final scenes and fly over the audience. The Tingler had “Percepto!” whereby seats in the audience were wired to buzz and vibrate when the tingler was let loose in a movie theater scene on-screen. Vincent Price, star of The Tingler, would warn you to “scream—scream for your lives!” and the seats would activate. My mother said she remembers her friend being in the seat next to her and screaming with fear from the vibration it gave and her running out of the theater. This was all part of the experience of the film, something I wish I could have been a part of. Sitting in my living room did not create the same effect. 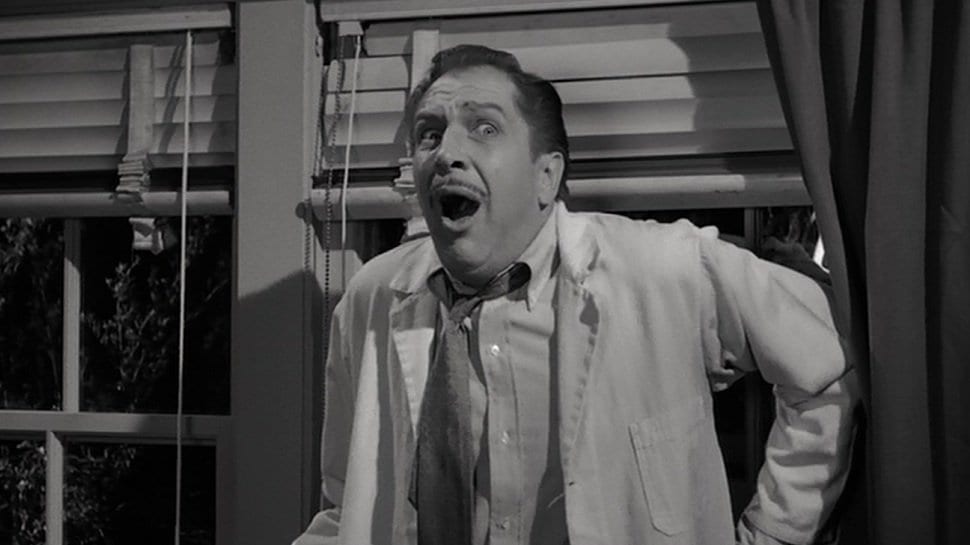 The Tingler as a movie itself was something to see. Vincent Price is at his horror best as Dr. Warren Chapin, a pathologist that has been studying the effects of fear on the body for years. He’s been trying to isolate where it comes from and what effect comes from holding the fear in. What he comes to discover is everyone has a “tingler” attached to their spine, a parasite that causes that tingling sensation from the extreme states of fear. It continues to grow and strengthen but will weaken from the host screaming, which brings me to the main story arc of The Tingler. Dr. Chapin meets Oliver “Ollie” Higgins, played by actor Phillip Coolidge, at the autopsy of his brother-in-law. When he asks the good doctor to give him a ride back to his place of business, a movie theater, Dr. Chapin meets Ollie’s wife, Martha (Judith Evelyn), who happens to be both deaf, mute, and is the only one who handles the movie theater profits. She also curiously faints at the site of blood, because she cannot let out her fear and scream. Can you see where this is going?

Dr. Chapin visits Martha on Ollie’s suggestion. Chapin gives her a sedative and gives Ollie a prescription to fill. Chapin tells Ollie that Martha is stressed and sleep deprived and just needs to rest. What happens next was a bit confusing to me. In the scene just prior, we see Dr. Chapin give himself LSD as an experiment to bring out his fears. He is desperately trying to discover if the tingler does indeed exist. Due to Martha being deaf and mute, is that the “sedative” he has injected into her? Was this a way for him to come face-to-face with the tingler? As she is restless still even with the sedative, Martha begins to hallucinate—seeing a monster with a knife, windows and doors locking themselves, blood streaming from the bathroom sink, and a tub full of red blood (the film is black and white) with a hand reaching out for her. 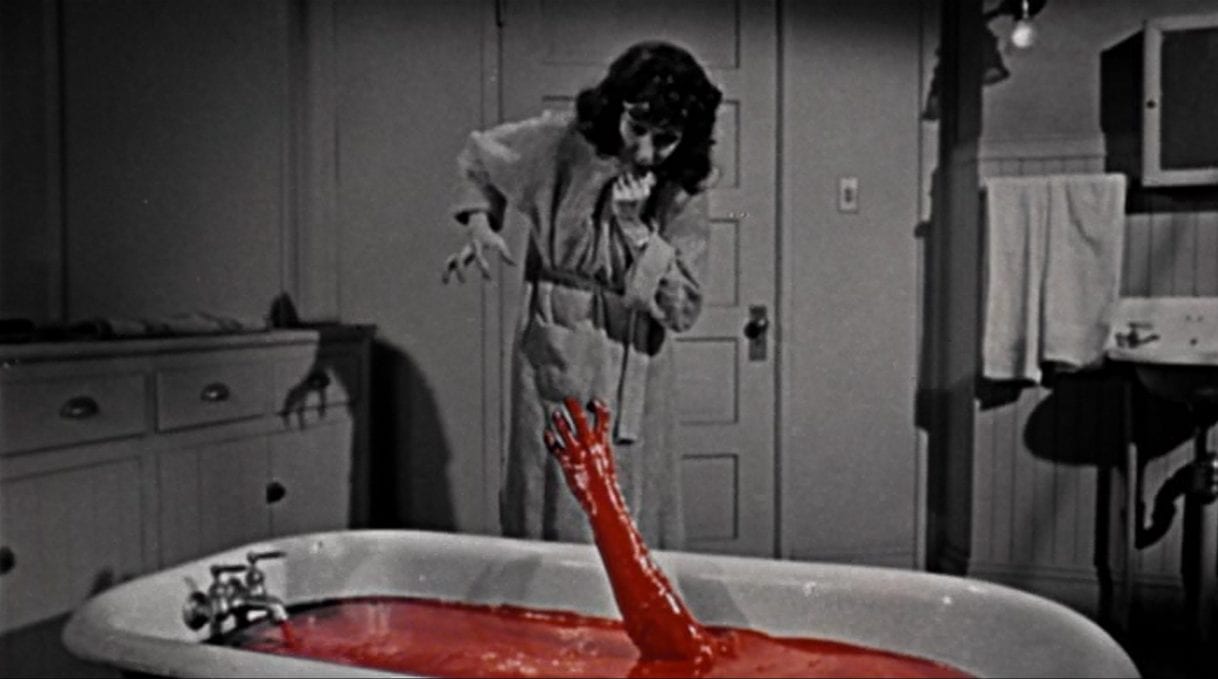 Martha dies from fright and Dr. Chapin removes the tingler from her spine. She could not defeat it due to her not being able to scream. Once removed during Martha’s autopsy, the tingler tries to kill Dr. Chapin several times. He tells Ollie to take Martha back to the apartment and call the coroner’s office. Once Dr. Chapin realizes he must put back the tingler to be able to stop it for good, he returns to Higgins’ apartment only to realize Martha’s death was no accident—Ollie, in fact, killed his wife. When deciding how to handle the situation, the tingler slips away down into the movie theater and all the unknowing patrons below. This is where “Percepto!” was utilized and screams came from the audience in the film and in real life. My mother said there were even paid actors that would run or faint in the theater. 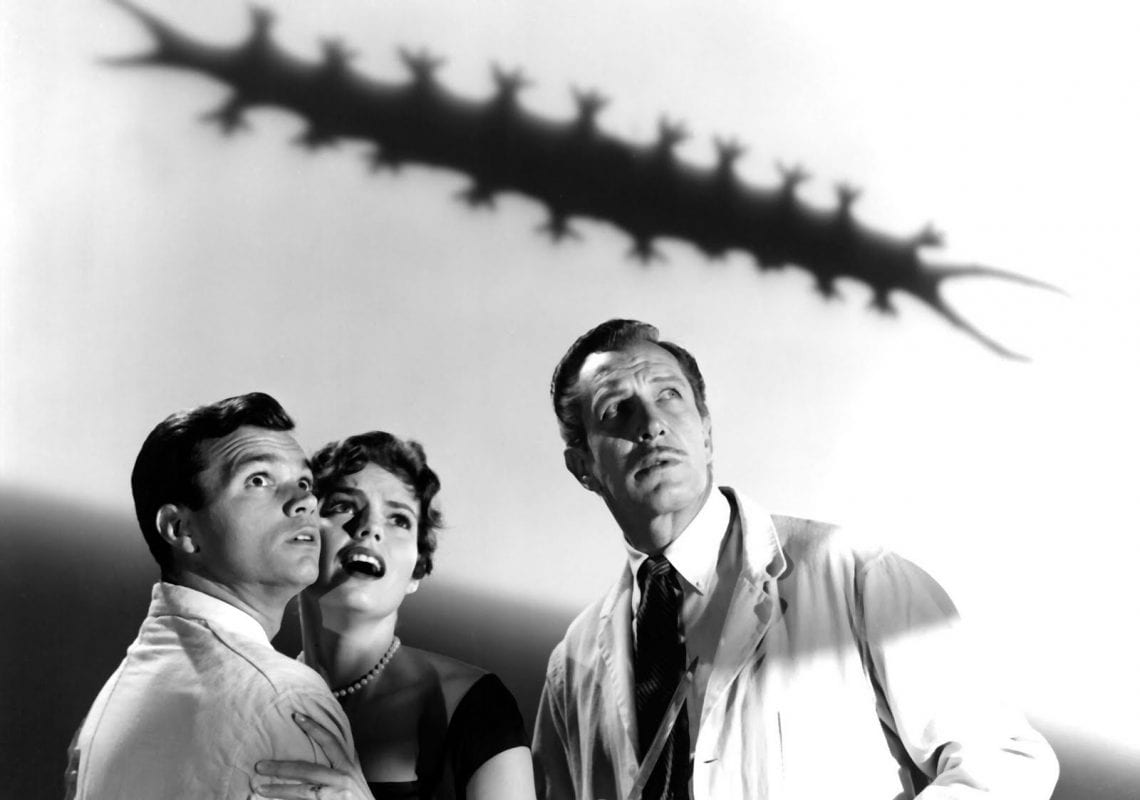 In the final scenes, Dr. Chapin returns the tingler to its rightful place, back in the spine of dear departed Martha, then leaves Ollie to sit with what he has done. Then the door slams, and the windows lock, and Martha rises from the dead and stares Ollie down. He is truly terrified but does not scream. As only the late, great Vincent Price can, a voice-over from Price comes on and says, “Ladies and gentlemen, just a word of warning. If any of you are not convinced that you have a tingler of your own, the next time you are frightened in the dark…don’t scream.” (The Tingler, 1959)

It was a lot of fun watching this for the first time with my mother, who had not seen it since she had viewed it in the movie theater all those years ago. A couple of takeaways from our viewing:

Watching The Tingler has made me want to discover some of Castle’s other films. I hope you join me in discovering more of these forgotten films that bring a sense of whimsy, nostalgia, and the occasional jump scare. Just remember to scream.