Looks like we’ve recently gotten a new teaser trailer for Stranger Things Season 3, if you’re a fan of the show you’re probably similar to me in the fact that you’re way too hyped about only half a minute of new information. That’s cool though, because it still gives us cause to nerd out and try to figure out any clues the next Season’s episode names might give us. So let’s break it down!

Suzie, Do You Copy?

Well who the hell is Suzie? I know we are getting a few new cast members next season a couple of names have circulated in the rumor mill but I definitely don’t recall hearing Suzie in the mix. The ‘Do You Copy?’, part of the title makes me think that we’re for sure still using two-way radios this season. They could be used for a million different things though, so without wild speculation, there isn’t a ton to glean from it.

We already for sure know that a mall is going to be a huge backdrop for this coming season, we’ve already seen a Starcourt mall in a mock commercial for it in a video released earlier this year. Steve appears to be working in said mall, so as he is the gangs licenced caregiver, and it’s Summer, and it’s 1985, I feel like it’s a good bet that we’re going to be in this mall a lot.

The Case of the Missing Lifeguard

This is where the titles start to interest me. We’ve already lost a beloved cast member due to an unfortunate incident with a pool and a hungry Demogorgon. Is some poor schmuck of a lifeguard about to meet the same fate? Honestly, everyone in this town should really think twice about how much time they spend in pools if that’s the case. If not, has a lifeguard been captured by some of the same guys that ran Hawkins Lab because he stumbled into the frame at the wrong time or place?

What? The first thing that pops into my head here is John Carpenters The Thing (1982) remake. Possibly like in last season, where The Mind Flayer had to be driven out of Will by nearly cooking him, the guys are trying to test one another in a sauna to make sure they’re not being possessed. This is my most solid theory.

Of all evil? Of Eleven and other kids powers? I feel like the latter was broached last season, but a definitive answer was not given. That would be nice to see, especially as Eleven is getting older, wiser, and probably very tired of not understanding exactly what she’s going through. I may be projecting my own hopes for the show at this point since I’m looking forward to all of the guys coming to terms with getting older and trying to understand themselves and what’s happening around them better.

This title seems pretty straightforward, one of the gang’s birthday parties spins hilariously or dangerously out of control probably due to the fact the Hawkins Indiana is clearly built on a crack in the universe, or a radioactive ancient Native American burial ground. This could very well be way off the mark, and the “birth” could be of something new and horrendously dangerous, either way I’m looking forward to the chaos. (I never even stop to think that the birthday could go well, and everyone would be happy at the end of the episode).

Yay, bring on the zombies! No, I’m joking, please do not. Possibly a Demodog bite? I’m hoping for a real “you gotta chop the arm off before you become infected” type drama right here. Possibly from Steve. Maybe next season he’ll have a chainsaw for an arm. Probably not, but I can dream. 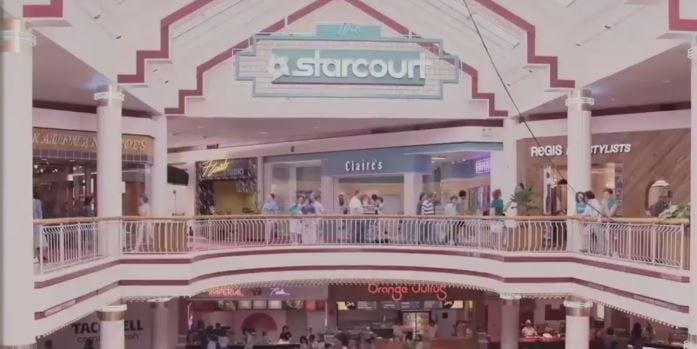 The Battle of Starcourt

Well, there goes the mall. It looked pretty and new in the previously released mock commercial, I feel like that’s not going to last if this episodes title holds any weight. There was another trailer released recently though that lends to the idea that Starcourt Mall will not make it through season 3, at least not in pristine condition. That trailer was for the Stranger Things Season 3 game though. It shows Steve and Hopper and some of the younger gang running around and blasting away bad guys in different areas of Hawkins. They do appear though to be shooting people with very large weapons in the mall as well though before they all run into the cinema, which makes me hope for some Demons (Lamberto Bava) references because that movie also came out in 1985.

There are a few things that I do expect to see from Season 3 of Stranger Things, different movie references, somewhere in the background the Live Aid concert will probably be playing on a television set, and proper grade school level shenanigans. I’m also hoping for really good character development for virtually everyone, especially the younger cast. The guys and girls are all at a pretty dramatic age already, then throw in supernatural elements and the NSA/FBI/CIA (all those guys) someone is bound to blow a gasket sooner or later. I do hope for some of the pivotal moments to be life altering for the cast, and I hope they’re not all based on relationships or whether or not the world is going to end. I would like some more exploration of the Upside Down as well, maybe we can begin to try and map it out, or use it to our advantage somehow, instead of it just being this alternate universe that we gain no functionality from.

How do you feel about the episode titles, am I irresponsibly far off in my guesswork? Are you excited about any one episode or character in particular? Let us know! We can argue and agree in the comments.