For me, HBO’s The Wire is at the very top of the Peak TV era.

Never before, or since, have I seen a show as realistic, gripping, intelligent, and heartbreaking. No other show is as effective at presenting such complicated characters: cops (the typical good guys) who are corrupt or inept, drug dealers (the typical bad guys) who you can’t help but root for, and all other types of people trapped in a whirlwind of politics, addiction, racism, violence, and flip-of-a-coin fortunes.

The Wire aired between 2002 and 2008, lasting five seasons. Due to suboptimal ratings, the show was almost canceled several times, and would have been if not for creator David Simon persuading HBO executives to let him bring things to a conclusion.

And boy am I glad he did.

A great show can have a disappointing finale and still be a great show. However, The Wire is a great show that has a fantastic final episode. Each season of The Wire focused on a different issue facing the city of Baltimore—think of each season as a chapter in a novel. The first season specifically looks at the illegal drug trade (which is a running theme throughout the entire series); the second season is about unions and Baltimore’s sea docking system; the third season focuses on politics; the fourth is about the school system; and the fifth and final season covers the print media industry.

Titled “-30-” (the traditional symbol in journalism that signifies the end of an article), The Wire series finale aired on March 9, 2008. It wrapped up the 10-episode Season 5, which I found to be the weakest season of the show’s run. The final season struggled in my eyes because of one particular storyline, in which Detective Jimmy McNulty begins staging crime scenes to make it look like Baltimore was dealing with a serial killer targeting homeless people. He did this in order to receive more resources that he, in turn, used to acquire an illegal wiretap to take down drug kingpin Marlo Stanfield.

On a different show, it would be easier to overlook the implausibility of this storyline. But part of what makes The Wire so great is how *real* the show is. (Many of the writers had firsthand experience with what they were writing about; a lot of the actors cast were real people from Baltimore with little-to-no previous acting experience, etc.) So even though Jimmy often stretched the rules within the police department, the fact that he would illegally plant false evidence at crime scenes was a little too hard to swallow—especially because he draws in his fellow detective, the good-natured Lester Freamon, to help. Many other aspects of Season 5 are outstanding, however. And it is capped off with one of my favorite series finales ever.

Throughout The Wire‘s run, some of the most shocking moments would typically occur before the season finale, with the final episode summarizing the importance of that season’s themes. Season 5 follows this pattern as well. The season’s most shocking moment—the surprisingly low-key murder of Omar Little—takes place in Episode 8, and the finale serves as a summary of the season (and show as a whole).

“-30-” opens with Deputy of Operations Cedric Daniels explaining to the mayor that the serial killer targeting homeless people was a hoax created by Jimmy. You would think this would spell the end for Jimmy and Lester, but the mayor’s office worries that making the truth public could hurt Mayor Carcetti’s chances at becoming governor.

Most of the episode revolves around the fallout of Jimmy’s shenanigans and how they would affect the people above them politically. Daniels is told to keep quiet about the whole mess in exchange for a promotion to commissioner. At one point in the episode, Jimmy walks into an elevator with Daniels. They both know what Jimmy did, but all Daniels can do is stare in his classic fashion. As he walks off and sternly tells Jimmy, “To be continued,” it’s just so perfect.

The fate of Marlo Stanfield is also related to Jimmy’s actions. Marlo was put behind bars because of the wiretap Jimmy acquired. But because the wiretap was gained illegally—and Marlo’s lawyer Levy knows this—Levy is able to work out a deal in which Marlo walks completely free, with the condition that if he goes back to causing trouble, the charges could come back after Carcetti’s election for governor. “Give up the crown,” Levy tells him.

It’s pretty crazy to think that Marlo is able to walk free from serious drug charges simply because the mayor wants to keep some unfavorable press quiet until an election, but that’s how things work in The Wire. The systems don’t make a lot of sense, and everything follows the chain of command.

There are two storylines that run through the Baltimore Sun newsroom in the finale. The smaller but heartfelt one shows us Bubbles working with a reporter who is writing a biographical piece. Bubbles is unsure of whether he wants it published and shows the draft version of the article to his sponsor, Walon (played by the fantastic Steve Earle, who performed the opening credits music for Season 5), who asks Bubbles if he’s afraid of people thinking he’s a good person. Bubbles has been through so much throughout The Wire, a show in which a lot of characters have an unhappy ending. But to see Bubbles pull himself out of the depths of heroin addiction, homelessness, the death of two close friends, and get to where he ends up in Season 5 (staying clean and finding a job selling newspapers) makes me ridiculously happy.

The other newsroom storyline focuses on a battle between a reporter, Scott, who has been falsifying quotes and facts in some of his articles, and the city desk editor, Gus, who knows the guy is a fraud but can’t get his bosses to listen (or care). Of all the terrible things that people do in The Wire, I found Scott’s actions—literally making things up and reporting them as fact—to be one of the worst.

As someone who has worked in publishing for my entire career, I can’t imagine what it would be like to encounter this affront to journalism. But I think The Wire does an excellent job of showing how news media publishers may prioritize making money over journalistic integrity. Even though this episode aired more than 10 years ago, this is still a relevant issue in today’s (crazy) media landscape. It’s almost assuredly even worse now, with newspapers slashing staff or even folding completely.

They might not be for everyone, but I really enjoyed the newsroom scenes in Season 5. The finale has such a great editor-shoutout scene, showing Gus editing an article and saying to the computer screen: “That Tom Wolfe motherfucker, thinking he’s gonna get a phrase like that past me? No frickin’ way, motherfucker!” as he slams the delete key. As an editor, personally, this scene makes me cheer every time.

The Wire series finale is packed with classic quotes and enthralling storylines, but what I think really makes it great is how it wraps everything up in a way that stays true to the show’s essence. The Wire is not a happy show. A lot of the characters end up with a raw deal—or wind up dead. The people of Baltimore are stuck in an endless cycle of corruption and crime that isn’t getting better.

My favorite part of the finale is how some of the characters find themselves in roles that are simply taking the place of others before them. Here is a breakdown of how some of The Wire‘s major players end up: 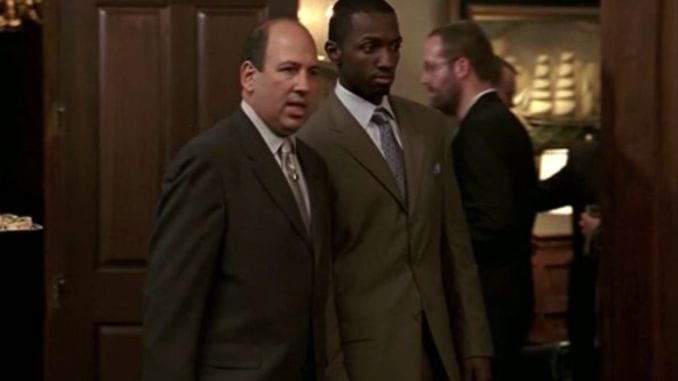 The end of the final montage switches gears to flashing still shots of real Baltimore residents—not actors in the show, but real people. It was the perfect way to end the series. The show had gone through five seasons of ups and downs, and the people of Baltimore basically ended up where everything started. It’s a bit of a scary outlook, but it’s the one that was needed to conclude this amazing work of art known as The Wire.