The staff at 25YL have been excited about this premiere since its San Diego Comic Con promotion last July. There are quite a few reasons for this particular show’s topic to capture us. Some of us miss the earliest intrigues of The X-Files, or we’re huge fans of Aidan Gillen’s work in The Wire and Game of Thrones. Most glaringly, though, it takes us back to Episode 20 of Twin Peaks Season 2, which aired on January 19, 1991. In that particular episode, Major Garland Briggs asks Sheriff Harry S. Truman, Doc Hayward, and FBI Special Agent Dale Cooper if they are familiar with Project Blue Book, which he describes as the Air Force’s investigation into UFOs, a project that ended in the 1960s. Dramatically, of course, maybe his secret knowledge and operations did not end there.

Rather, it is there that a powerful narrative for the world of Twin Peaks begins with Project Blue Book’s mysteries incorporated. It is a speculative narrative that would gain in heights and depths with Mark Frost’s The Secret History of Twin Peaks: A Novel, Twin Peaks Season 3 (2017), and Twin Peaks: The Final Dossier. Several of our staff have spent the past year and a half examining this through-line (or ley line, if you will), seeking how its voluminous findings might inform the much-beloved mythos of Twin Peaks. I should state that you will not need to be a Twin Peaks fan to enjoy my coverage of this show, but occasionally I will try to incorporate significant communications between the two, like the fact that Harley Peyton, a significant writer and director on Twin Peaks (1989–1991), is a writer on this series. Given the recent premiere, we can begin to speculate on our own.

Almost 60 years after the closure of Project Blue Book, the secretive investigation is taking on a newly dramatized life on the History Channel, one that brings us into the world of J. Allen Hynek’s sought-after skepticism in the Air Force’s investigation. If in the Twin Peaks franchise Project Blue Book included some of the show’s most notorious geniuses, actual history included equivalent men and women. Dr. J. Allen Hynek is one of those geniuses and the protagonist of this series. Beyond his own popular works, including 1972’s The UFO Experience: A Scientific Inquiry, and his well-reported influence and cameo in Steven Spielberg’s Close Encounters of a Third Kind, Hynek has been the focus of works as late as 2017, particularly Mark O’Connell’s The Close Encounters Man: How One Man Made the World Believe in UFOs.

This premiere episode of Project Blue Book is titled “The Fuller Dogfight.” The reference is to the Gorman Dogfight Incident, which was reported October 1, 1948. The years are important. As I’ve quoted before and according to Dr. J. Allen Hynek, “Originally termed ‘Project Sign’ and initiated in September, 1947, on February 11, 1949, it became ‘Project Grudge’; then from summer of 1951 to late 1960 it was called, ‘Project Blue Book’. Code names are not supposed to have any special significance, but the reader may read into them whatever he wishes.”[1] Project Sign would eventually hire on Hynek, who was at the time considered the top of his field in astronomy. He was to join as a scientist with balanced skepticism, to report on the high improbability of reported unidentified flying objects, especially those hinting at extraterrestrial origins.

While that is a lot of history to navigate, you will not have to wait until mid-season to get through Project Sign; the timeline has been consolidated. Nor will you need to worry about it being a dry, reenacted case-by-case procedural, unless that is what you had hoped for. The writers are having fun with their fictionalized account, and the History Channel is happy to helm “the truth,” at least enough to intrigue you to visit their website to learn more.

As the show opens in the sky with pilot Fuller—it is not the “fuller story of the dogfight,” rather pilot Fuller’s dogfight replacing George Gorman’s name—many of the facts remain intact. He does a fly-over of a Fargo, North Dakota football field. He radios in to find out if anyone else is in the air. The Piper Cub plane reported at 500 feet beneath him and then confirmed by Gorman is not in this version. Fuller sees a bright object passing him, which he decides to chase at dangerous speeds. In this version, he hears a local broadcast over his headphones with sudden interference. In this version of dogfight, instead of simply chasing the object as Gorman did, Fuller fires at the object, which turns its trajectory, grazing and damaging his wing. He goes down.

The audience then has its attention turned to a government officials meeting, where they are watching 1951’s The Day the Earth Stood Still. This early in the series, we are already made aware that there is no need to get picky with the details. Remember, the Gorman Dogfight was reported in 1948, and Hynek was hired onto Project Sign, not Project Blue Book. The importance of this scene is that we hear the officials, including well-cast Neal McDonough as General James Harding, explain that Truman wants the narrative of new hysteric reports of unidentified objects controlled by his people and not Hollywood. Harding will contact his most trusted man in Captain Michael Quinn, who I suspect is a stand-in for Captain Edward J. Ruppelt, author of The Report on Unidentified Flying Objects. He is to contact and recruit a new partner in Hynek with a little convincing.

It is stated in this series that Hynek, who is highly questioned by his colleagues in his opening scene, seeks “recognition.” O’Connell explains of Hynek’s accomplishments in his book The Close Encounters Man.

“This was a man who helped win World War II with science, who discovered how and why stars twinkle (not a small thing), and who helped determine the landing sites for the Apollo moon missions. Along the way, he pioneered crowdsourcing, developed the world’s first global satellite tracking network, discovered a record number of supernovae, and paved the way for the Hubble Space Telescope. If Hynek’s career as a UFO researcher was universally misunderstood and misjudged, his career in astronomy seemed to have been swept under the rug in its entirety.”[2]

As Hynek accepts his part in Project Blue Book, it is almost inevitable that we see a third party secretly taking photos of him, a suggested society in Black. 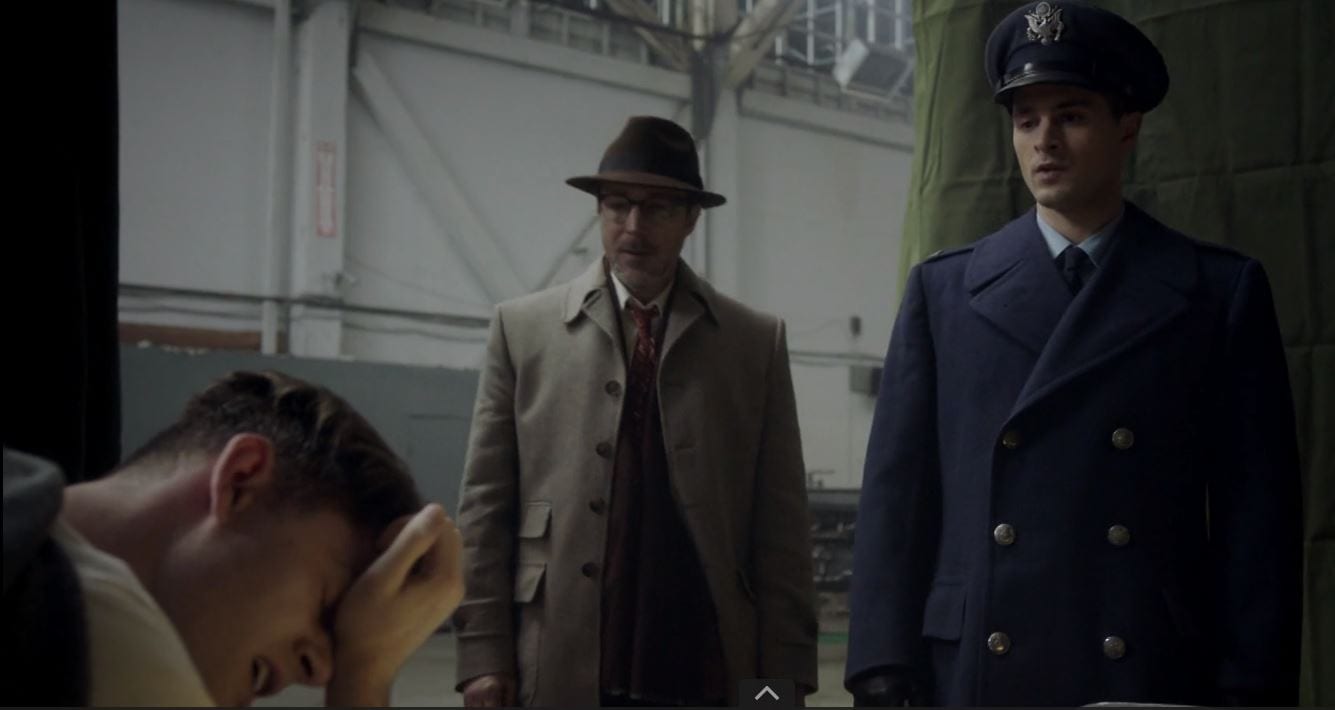 Without giving a play-by-play, this series has a look that is muted compared to last year’s star-seeking series Strange Angel. The military’s olive drabness appears in hangars where it should, and fans of popular culture might expect to see Captain America’s Arnim Zola peer from any corner of certain scenes. This is a compliment as it manages to feel like a period piece while maintaining an aesthetic of pulp possibility much like Spielberg’s Amazing Stories. At 24 minutes in, Hynek gives us the term UFO, because in this world, of course he established it.

The series also gives time to Hynek’s wife, Mimi, who is living her own life with Hynek away. Shopping, she meets a new friend in Susie Miller, and if you feel their friendship comes off as too-easily sparked, you won’t be surprised at the obvious reveal toward the end of the episode. It all works toward the fun of the show. At 34 minutes in, we are finally introduced to the term “foo fighters,” those balls of light seen by WWII bombers and pilots, which help to inform the narrative of Gorman’s reported experience along with the Chiles-Whitted case from July 24, 1948.

Throughout the series, Hynek is suspiciously followed and allowed to see suggested “men in black,” especially following a failed simulation of Fuller’s flight maneuvers, which leads Quinn and Hynek to crash. Hynek is able to sneak a private interview with Fuller in the hospital, who explains to him that the impossible local broadcast he heard at his heights was communicating with him and that his impossible maneuvers were not his own. The unidentified bright light he saw maneuvered his plane as if showing what it was capable of. Quinn is forced to write off the incident as a weather balloon, and Hynek is given a car to travel back home in with the case closed as far as the military is concerned. Someone, perhaps a “man in black,” forces Hynek to an abandoned amusement park, where he chases the person to an abandoned projection room. The film shows a few key symbols for him to keep in mind, triangle formations with three-point circles. They remind us of the ionizing radiation symbol, a formation seen in Twin Peaks manipulated in various fashions and suggested by the Diane Podcast as possibly relating to Celtic knots. More on this subject as we further explore their significance in this series in future episodes. 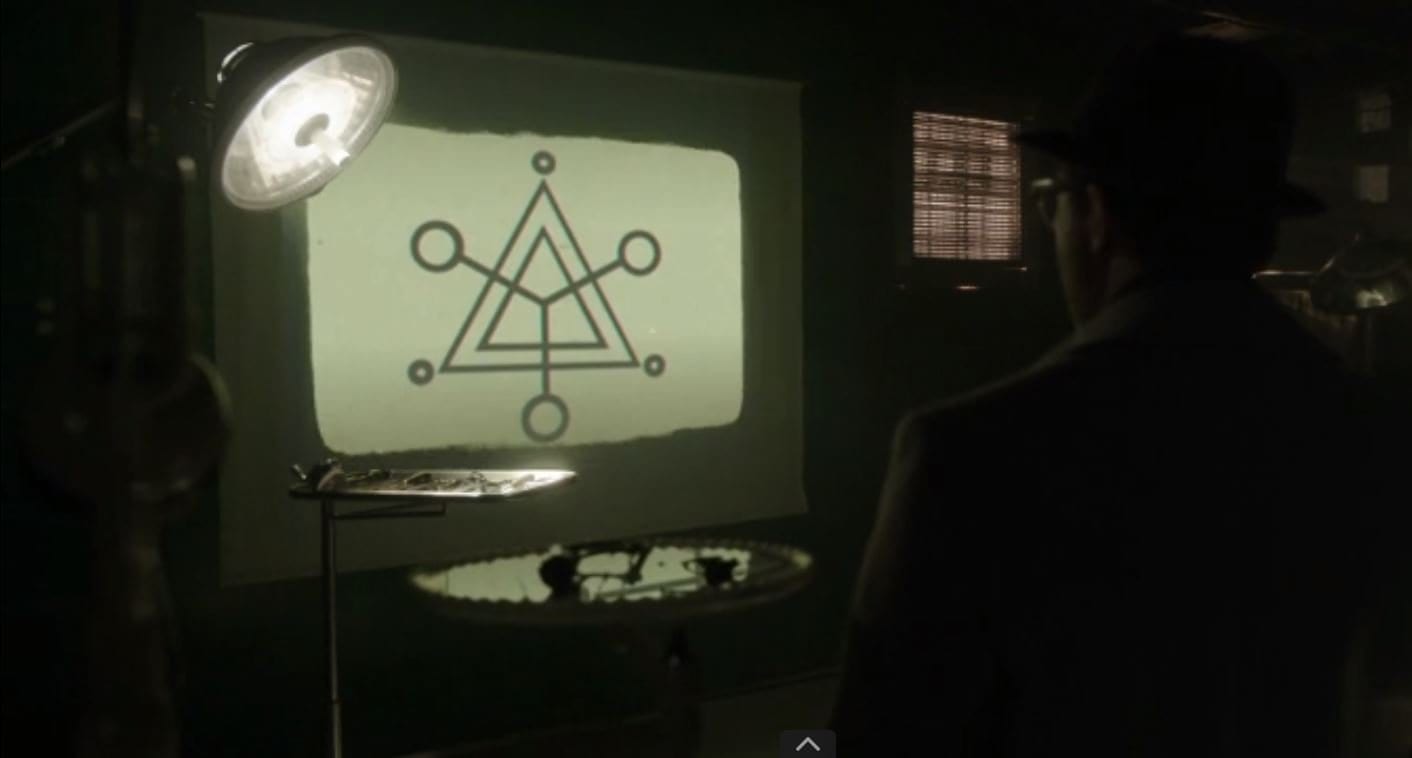 Altogether, I expect this series will pick up in pace now that it is established. Hynek’s interest is piqued, and mysterious third parties are concerned. Gillen’s American accent catches one off guard at first, but it settles quickly, almost as quickly as the fed information in this first episode’s plot. The writers wasted no time getting audiences in the consolidated world of events for Project Blue Book. The show promises a love letter to the government conspiracy behind Hynek’s investigations and a willingness to allow the most exciting tropes around them: men in black, aliens behind closed doors, and Cold War injections that erase only those synapses of the brain that retain the single experiences. I hope that you will continue to join us in our coverage of the series, where I will continue our analysis for the mid-season and the finale episodes.