From the very beginning, Star Trek: Discovery has shown that it’s not afraid to tackle different and unexpected types of storytelling, stretching the boundaries of what a Trek episode can be. Other Trek series have done similar things, usually employing the virtual reality technology of the holodeck to put the crew in un-Trek-like situations. This philosophy was employed to great effect in the series of four Short Treks that acted as prequels to Discovery‘s second season, and it has been developed even further in Season 2, utilizing the magic wonderland of the mycelial network rather than holodeck technology.

At the end of the fourth episode, Ensign Tilly (Mary Wiseman) is essentially kidnapped by a ghost-like figure she’d been seeing for a couple of episodes, patterned after a Junior High School friend of hers called May Ahearn. We learn that May is a creature from the network and has crossed over to find a sympathetic person—it selects Tilly—for some undisclosed purpose, absconding with her into the network itself. Episode 5, “Saints of Imperfection,” an episode that looks far more like an episode of Stranger Things, deals primarily with her rescue from the mycelial “upside down.” Tilly learns that May needs her to help track down a monster that has been damaging the network. Meanwhile, Science officer Stamets (Anthony Rapp) discovers that the pod that May dragged Tilly into at the end of the last episode works sort of like a transporter. By scanning for a molecular structure that matches the pod, he can track down where Tilly was transported to, and he concocts a plan to use the ship’s spore drive to rescue her.

But the Discovery crew picks up another passenger in the network while rescuing Tilly: Dr. Hugh Culber (Wilson Cruz), Stamets’ long-lost partner. We’ve had hints that Culber was still alive—or at least active in some way—in the network, as he has appeared to Stamets at random times, and once helped to navigate one of the ship’s spore drive jumps. So it isn’t a surprise in any way that Culber would at some point reappear on the show (plus, Cruz has pretty much admitted in interviews that he’d be returning to the show, so there’s that). But as we know from watching genre shows, no one is ever brought back “from the dead” without there being some kind of consequence. Culber will not be the same Culber that we’ve known. He will be changed in some way, in his perspective at least, if not in some more fundamental way. 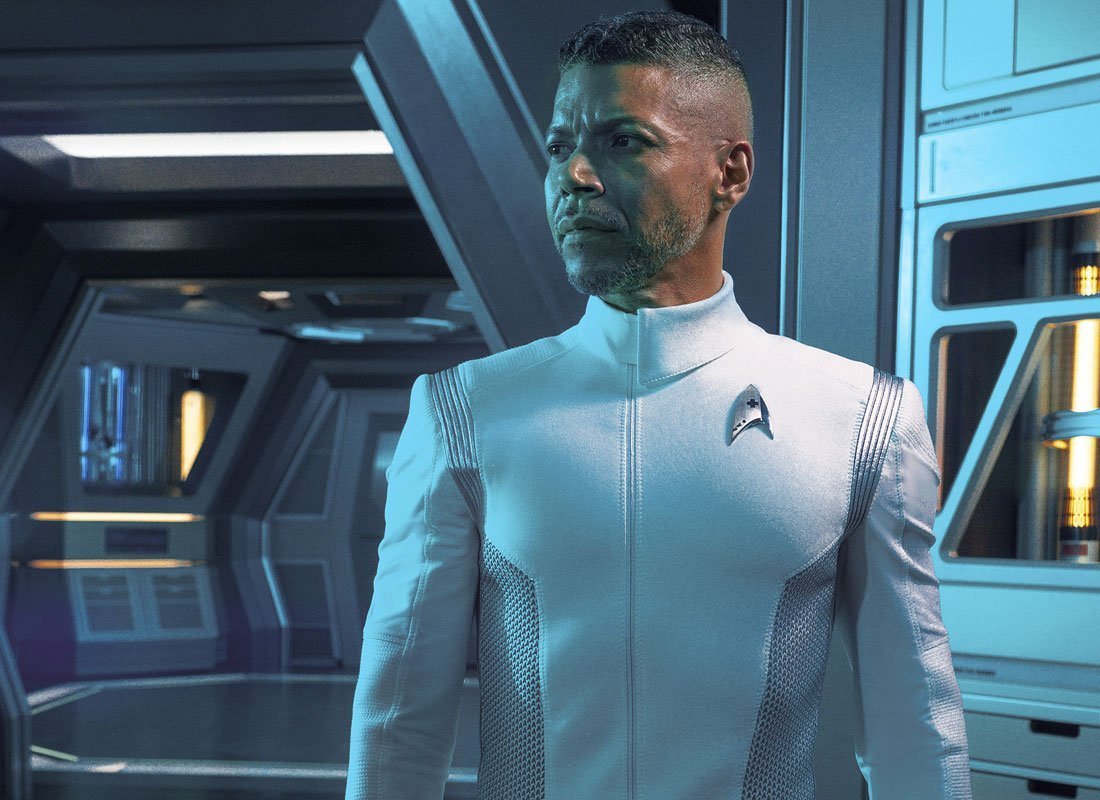 My only real complaint about this episode was the pacing. The story is essentially told from two different perspectives: that of the Tilly rescue mission and that of the bridge crew, who are trying to keep the ship, which is parked in mid-jump, “afloat.” For most of the second half of the episode the scripting seems to be a bit light on the bridge side of the equation, with lots of “Hurry up, we have to get out of here now!” scenes, followed by ten minutes (okay, that may be a bit of an exaggeration) of the rescue mission talking and figuring things out. It artificially inflates (or, more accurately, undermines) the urgency of the ship’s predicament and basically gives the bridge team the scripted equivalent of “busy work.”

Actually, I have two complaints. This entire season has been building up to the Discovery crew encountering Spock, who holds some knowledge about the season’s big story arc—the mystery of seven red bursts that have appeared across the galaxy, and the appearance of a Red Angel. For the past couple of episodes we’ve been tracking a shuttle that Spock stole from Starbase 5, where he was under psychological care. In “Saints of Imperfection,” we finally catch up to Spock’s shuttle…but Spock isn’t in it. It’s Philippa Georgiou instead. So the appearance of Spock, which was trailed heavily leading up to the debut of Season 2, is delayed yet again by another fake out. Not that I’m bemoaning a further appearance of Michelle Yeoh, who was fabulous in this episode, but it’s the double bluff of continuously holding out the promise of Spock like a carrot dangled in front of viewers’ faces and then continuing to yank it away. In that regard it’s kind of like Twin Peaks: The Return, I suppose, in which viewers waited nearly the entire 18-episode season for the return of Agent Dale Cooper. When it finally did happen, it was like an orgasmic release. The big difference, though, is that in the case of Discovery, all the trailers, and all the posters, have shown Spock. We’ve seen him in action, we’ve heard him speak, so we know it’s coming. I just hope it’s worth the wait.

Another thing about delaying Spock’s return: we’ve been told many times that Michael Burnham (Sonequa Martin-Green) is Spock’s sister, adopted as she was by Sarek and Amanda and raised as their daughter. This season has had many moments of her referring to Spock as “my brother,” and she’s made many allusions to a rift in their relationship that she has caused. But for the audience, this is all academic. With no Spock/Burnham scenes to go on, there’s no relationship for us to invest in. It’s all just words that don’t (yet) ring true from a character that some fans feel has been shoehorned into previously established continuity. We trust that this connection is coming, that there will be a relationship for us to invest in, but for now it all sounds a bit hollow.

Bringing up Georgiou brings us to the episode’s B-story, which, in all honesty, is far more interesting than the A-story, and that’s Section 31’s involvement in the search for Spock (pun definitely intended). Starfleet’s covert intelligence organization has been tasked with locating and apprehending the wayward Vulcan accused of multiple murders on Starbase 5. Captain Pike (Anson Mount) needs him because of his connection to the phenomenon that Discovery is investigating. We see that Pike is uncomfortable with Section 31’s involvement due to an ideological disagreement with the way 31 operates. This is complicated further by an old friend of his, Leland (Alan Van Sprang), now working for 31.

This was the weakest episode of Season 2 for me. The artificially inflated pacing was a bit tedious, and I find Pike’s conflict of conscience with Section 31 to be far more interesting than the mycelial network plot. Hopefully we’ll see more ideological headbutting between Pike and Leland as the season progresses, with Pike wrestling with his feelings about Section 31 and his friendship with Leland. They have been ordered to put aside their differences and work together by Admiral Cornwell (a returning Jayne Brook), so it’ll be interesting to see how that plays out. But more than anything, this episode needed a shot in the arm from Commander Jett Reno (Tig Notaro). Seriously, why is she not in every episode?

Next week’s episode is a direct continuation from the Short Treks episode “The Brightest Star” and last week’s episode “An Obol for Charon” with Saru (Doug Jones) returning to his home planet to confront the lie of the Great Balance, the hunter/prey relationship between his people and their oppressors, the Ba’ul. The as-yet-untitled episode will be released Thursday, February 21 on CBS All Access.