The Umbrella Academy has landed on Netflix at last, and as a huge fan of the comics, I couldn’t wait to jump in and see what the show had to offer. I had a couple of doubts after the trailers, but as the ending credits rolled on episode one, these doubts had disappeared. So join me, Anthony Divers, as I look back at what worked and what didn’t in the first episode of The Umbrella Academy: “We Only See Each Other at Weddings and Funerals.”

My first fan delight was seeing that the name of the first episode was taken directly from the comics. One of my favourite things about The Umbrella Academy stories was the issue titles, which always had that My Chemical Romance dark wit that brought me to the comics in the first place. So episode one was already ticking boxes for me before I’d even hit the play button. But when I did hit that play button, I was given one of the best opening sequences I’ve seen in a TV show in some time. After a brief explanation of where the Academy children came from and how eccentric billionaire Reginald Hargreeves came to have them in his possession, we see Ellen Page’s character Vanya playing a medley of Phantom of the Opera hits on her haunting violin, as we are introduced to the characters of the show. We see Luther alone in space, his hulking body already looking bigger than it did in the trailer. We see Diego showing off his knife-throwing skills and Allyson as a red carpet actress. And we see Klaus, my favourite male character from the comics, being released from rehab only to go straight back to drugs and resuscitation in the back of an ambulance. All of this with Vanya’s electrifying violin music in the background. I was blown away. I’m not ashamed to admit I watched the opening scene twice before continuing the episode. Excellent stuff. 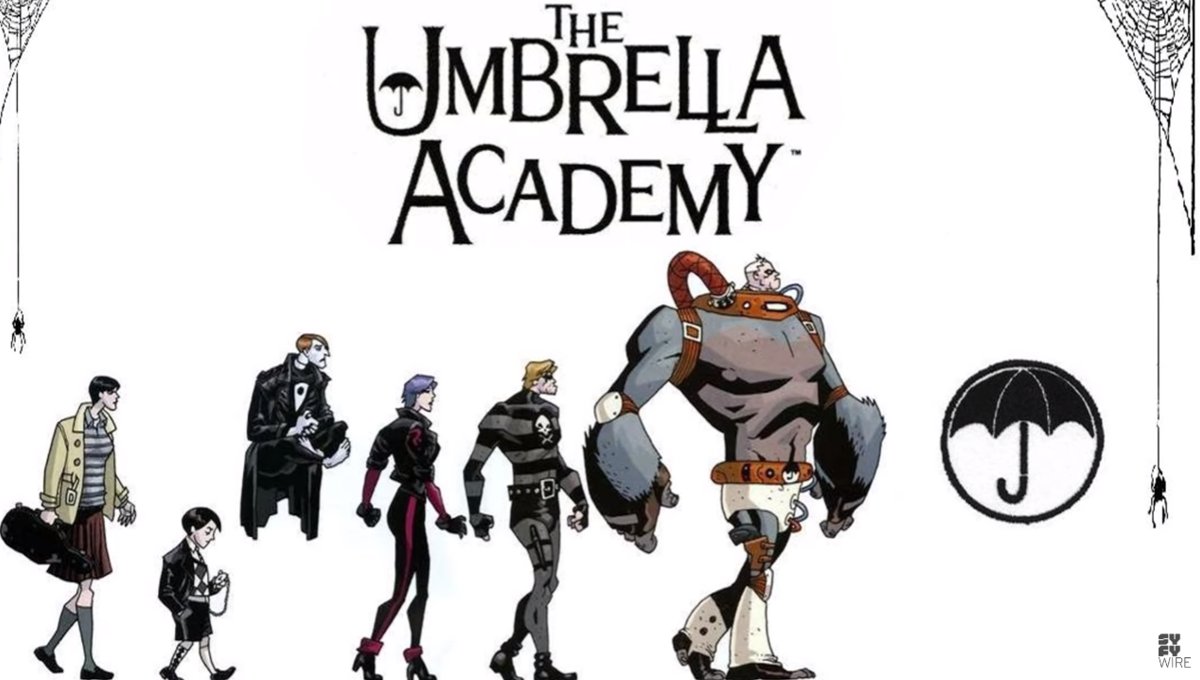 So, to highlight the things that worked for me, I first want to talk about the casting choices. For me, they are perfect. Tom Hopper as Luther, Ellen Page as Vanya and Robert Sheehan as Klaus, in particular, stand out. Hopper portrays that Luther is a hero at his core and that he believes in justice and truth. Page shows Vanya as the quiet outsider who was never really accepted as part of the family. And Sheehan as Klaus is just awesome. He actually takes the characters personality traits and pushes them further than the comics did, which I think is a brilliant decision. I also enjoyed the other members of the team, Allison, Diego and The Boy; I just feel the first three stood out more. I’m sure they will develop further as the episodes progress. I’m also relieved that Pogo works on screen as this was one of my concerns. How would they make an ape butler look realistic?! But luckily the CGI has been worked on well and Pogo feels like a genuine part of their world.

I’m also happy with the way they introduced the Mother; I didn’t think they were going to reveal that she was a robot, and was relieved when they did.

The next element that worked well for me was the pacing of the show. After that awesome intro, the episode progressed in a way that felt natural and never left you feeling bored. Also, the soundtrack was predictably killer—with Gerard Way’s involvement, how could it not be? That Phantom of the Opera medley is still playing in my head. I also particularly enjoyed the flashbacks to when they were children. It was great to see what it was like for them growing up, enjoying the fame and the excitement of fighting crime whilst they developed their powers under Hargreeves’ tuition. The episode also featured a few shots that were lifted directly from the comic pages, which just tickled my fan spot delightfully. The siblings gathered for the funeral next to the statue of Ben, Vanya asking why she couldn’t play with the others only to be told she wasn’t special by her father, and the diner scene with The Boy, where he kicks those assassins butts: all direct references to the comic and all done brilliantly. If they keep this up we should be in store for some gorgeous imagery. Gorgeous and brutal.

Now onto a couple of elements that didn’t work so well for me. I am honestly finding it hard to find negatives after watching the opening episode, but I want to try and be as fair as I can and not just a mega-fan squealing over every element. So, one thing that could become a concern is that some of the sibling’s powers have not been mentioned yet. Does that mean they don’t possess them? In the comics, Klaus can levitate and Diego can hold his breath indefinitely. Hargreeves himself thinks that Diegos’s breathing power is useless but it still would be good to have it confirmed that he can do that.

Another tiny point which may not even be worth mentioning is that in the comics, The Boy tells the group the world will end in three days, but in the show he says eight days. I know this could be irrelevant but as a fan of the comics, reading that they had three days to ensure the safety of the earth was tense. Extending it to eight days kind of relieves that tension a little, which takes away from the overall feeling of the story. But as I say, I am clutching at straws here. Overall the episode was great and me struggling to pick faults with it is testament to that. The problems I have mentioned could very well be resolved in the next episode. I have faith.

Now onto things I am looking forward to in the upcoming episodes. Some of these are comic specific, so if you don’t want spoilers, stop reading here!

Most of all I am looking forward to seeing Vanya’s descent into evil. Fans of the comics will know that she is the big bad of series one: The White Violin. I cannot talk enough about how much I loved her character and her power in the comics. She’s beautiful and chaotic, and her power is devastating. Remember what she does to Pogo?! The whole Orchestra Verdammten story is excellent and I can’t wait to see it portrayed on screen. Also, I’m looking forward to Hazel and Cha Cha. Those adorable serial killers are going to be awesome, especially as Mary J. Blige is playing Cha Cha. I’m anticipating scenes reminiscent of the bank job scene in The Dark Knight; funny masks used by very dark villains. I’m also excited to see how the actors will develop their characters, particularly Klaus and Allison. They’ve got a lot of material to play with so I’m interested to see how far they’ll take it.

The whole of the first episode was pretty much just setting up the storyline and telling us about the characters. This episode covers around 3 issues of the comic, and there are only 6 issues per story arc. This leads me to believe the TV series may cover the entire comic book story, which is thrilling. If you haven’t read the comics you are in for a treat, provided they stick to the original story. I’m interested to hear what this episode was like for viewers not familiar with the books. Did it make sense? Did it explain the characters and their powers enough? Let us know, I’d love to hear your views. I’m off to watch more episodes! In closing, I will say to viewers who haven’t read the comics to keep an eye on Vanya. I heard a rumour that she’s very important.

Anthony Divers is a writer and social media manager for 25YL, and works as a team leader for a group of staff in a service centre. He loves gaming, horror movies and music. Living in the North East of England, he is surrounded by family, cats and his partner, who also works for 25YL. He believes he is the funniest man in England, and collects the souls of his defeated enemies in cute little jars. He has won first prize for the annual Valentine's poetry competition at his work place 3 years in a row, and also took the trophy for Best Wig in 2014*

*no one else was judged, or indeed asked to wear a wig, but a trophy's a trophy.