I probably came to Cabaret at what most would consider way too young. I would like to say I have an old soul, but to be honest having a grandmother who made me aware of movie musicals and the brilliance of Bob Fosse and Gwen Verdon had a lot to do with it. I was obsessed with the dancing, the style, and the picture as a whole—a vision that I thought came just from Fosse’s direction and choreography until I tuned into the premiere of Fosse/Verdon on FX. Now I know for sure that behind every successful man is an even more powerful and successful woman, even if she does not always know it.

Let me get the accolades out of the way first. I have not seen many of Sam Rockwell’s more recent, serious, and Oscar-winning roles. However I have seen old footage of Bob Fosse, and Rockwell has captured the man, the director, and the taskmaster. After about ten minutes of watching Michelle Williams’s performance I tweeted, “If Michelle Williams doesn’t win all the awards for her portrayal of Gwen Verdon…” and I will challenge to a dance off anyone and everyone that disagrees with that statement. The cinematography is beautiful, as if from another realm Fosse told Tim Ives how the show should be shot. Not that Ives needs the help; he has proved himself a gifted director of photography on some of the best shows on recent television, particularly Stranger Things.

A moment that stands out is when Fosse gets the news that he lost $20 million for the studio for Sweet Charity. We get a gorgeous long shot of Fosse and Verdon’s NYC apartment as Fosse opens the doors to the rooftop patio and jumps off the edge. We soon see this is all in Fosse’s head. He hasn’t moved from his chair as day turns to night while he reads every single review. This tells us a lot about the stylization of the show and about Fosse himself. When Verdon comes to join him and take him back to bed, this also visually tells us more about their relationship/partnership. Another insight into Fosse is the flashback to when Fosse was a child, being put through his time steps and one-footed wings by a smoking, dance authoritarian (not unlike who Fosse would become). Visually, to see Fosse “watching” himself on the Kit Kat Club stage brings you into the mind of the man.

Let me stop for a moment and give makeup designer Debbie Zoller some love. Incredible job! Rockwell is Fosse. Williams embodies Verdon. I got the chance to interview Debbie about her work on Twin Peaks as Makeup Department Head so to get to see more of her fantastic work is always a treat. 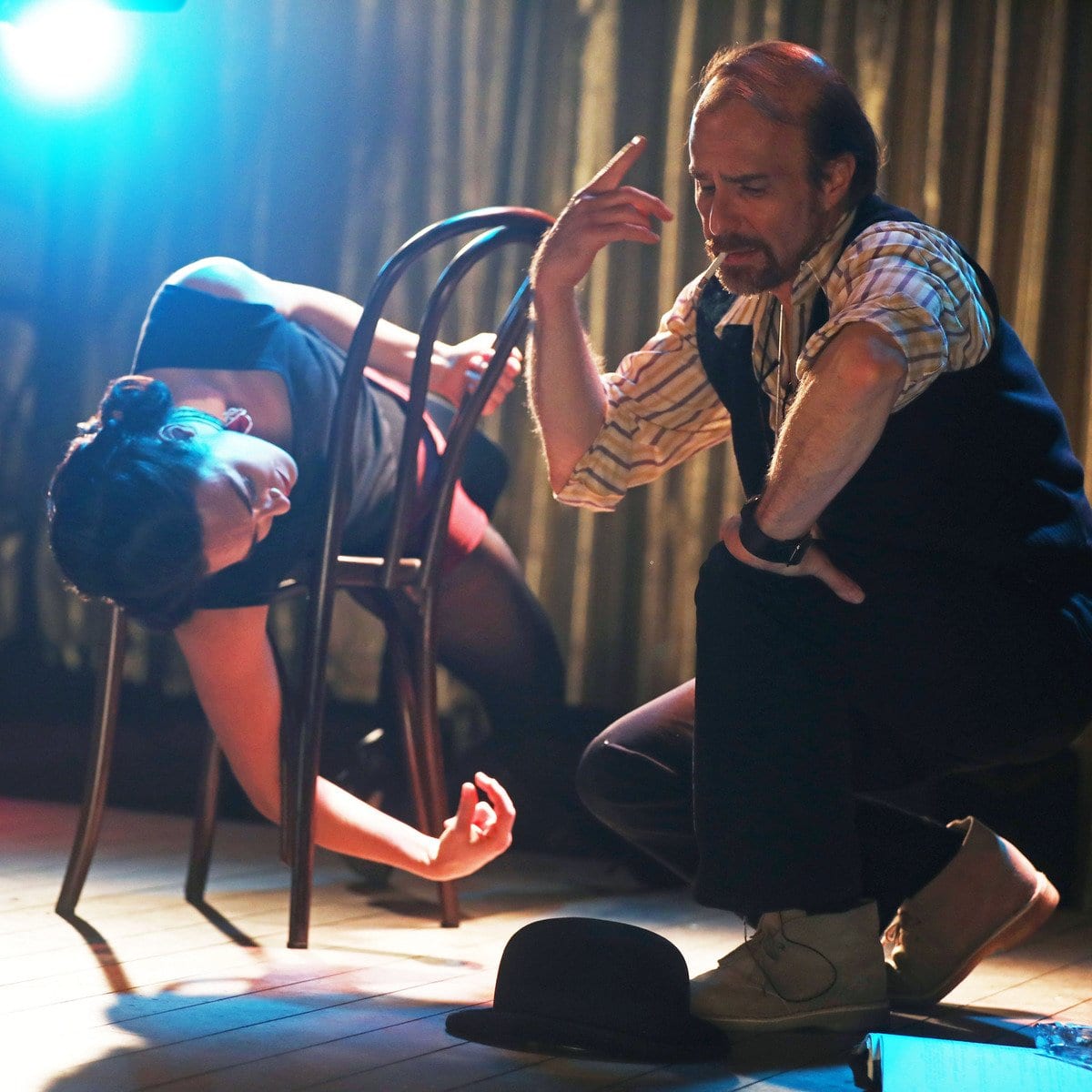 My excitement leading up to Tuesday night’s premiere of Fosse/Verdon was due to the behind-the-scenes look at many of my favorite songs and dances of a bygone era, and I was hooked the minute “Big Spender” came on. You soon realize that the relationship between Fosse and Verdon is also going to be the star of the show. With Nicole Fosse (Bob and Gwen’s daughter) co-producing, you know that what we will become privy to can only be a truthful and honest look at her parents’ tumultuous love story and careers. There is no denying that this will be a story that will share both sides of an intimate partnership. I have the feeling we will not only see the drive and perfectionism of the tortured Fosse but also how his womanizing, drug-addicted ways affected Verdon’s life, well-being, and career , which was so closely intertwined with Fosse’s own.

Yes, they were partners in life, but they had a connection that was deeper than that. In one particular scene, Fosse sends for Verdon to join him in Munich while filming Cabaret. Verdon tells producer Cy Feuer (played brilliantly by Paul Reiser), “I just know how to speak Bob, it’s my native tongue,” and we see this throughout the rest of the hour. Whether she is trying to convince him he did exactly what the studio wanted while directing Sweet Charity, or telling him that when she returns to Munich with the gorilla costume for Cabaret she wants him to stop sleeping with the beautiful German translator, it seems as if Verdon knew Fosse better than he knew himself. 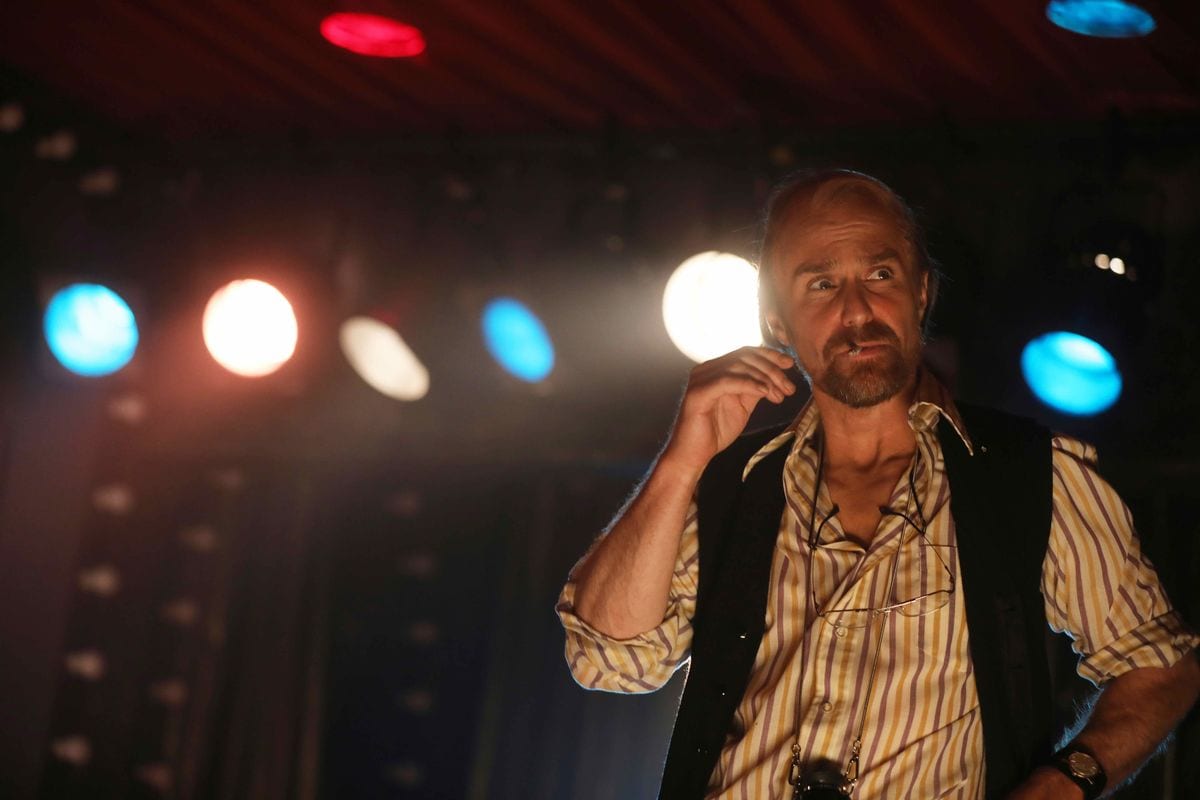 I am very excited to see how they continue this story throughout the eight-episode run. I love the way they are counting down: “Hollywood, 19 years left,” “New York, 18 years left.” What are we counting down to? Well, I know what, but I won’t ruin it for for those who don’t (though I will say the end of the episode—Fosse staring at Verdon outside his hotel room door, and their exchange—is very important). So no spoilers, but just remember that moment.

The hype surrounding Fosse/Verdon was on the money. Everything about the show has held up to what was promised before its premiere. The acting, the performances, the costumes and makeup, the beautiful cinematography—it is a complete snapshot.

The timing of this story is not lost on me. In the era of equality for woman, Verdon started as the bigger star. Becoming Fosse’s wife and creative partner changed her trajectory, with her own rise to greatness cut short and her role changed to being the uncredited brilliance behind the man. She is the reason he was allowed to become the tortured genius, because she carries the emotional baggage and keeps those time steps in rhythm. Though I think what we will see unfold (as the promo below shows us) is that when Verdon realizes what she receives out of this partnership is literally “nothing,” and it was always about Fosse and never her, she’ll realize she was never his equal, but his superior.

Watching the amount of smoking that takes place, not just from Fosse himself, but everyone during this time period makes me want to choke. As a reformed smoker, I will admit there is a certain type of sexiness that comes from lighting a cigarette and inhaling and exhaling the smoke, but I can only imagine what the modern day cost —both literally and financially—would be for all those cigarettes.

Did you watch the premiere of Fosse/Verdon? Did it capture your attention, 5,6,7,8? Stay tuned for continuing coverage of the eight-episode series. Fosse/Verdon airs Tuesday nights on FX at 10pm EST.