Shudder Classics is a new series from 25YL. Our writers have been given free reign to pick a film from the Shudder library that they feel is a classic and tell us why. Join Josh Lami as he looks back at the film that brought Joe Bob Briggs back to the drive-in, Tourist Trap.

What can be said about David Schmoeller’s horror masterwork, Tourist Trap (1979), that hasn’t already been said? A lot, actually, as this movie has been criminally under-appreciated since its release. Especially considering the fact that Stephen King gave this movie a lot of praise. No doubt, many will note this movie as the kickoff to Joe Bob Briggs’ return to horror movie hosting in July of last year for the thirteen-movie marathon The Last Drive-In…and what a perfect movie to lead with. So perfect in fact, that the wise folks over at Shudder saw fit to turn the one-time deal into a weekly series. I’ve said before that I wouldn’t be averse to Joe Bob hosting this movie again on the series, simply because there are so many scenes perfect for fat-chewing. That’s almost certainly not going to happen, though, and that’s part of why 25YL is here. To jaw-flap about movies. There’s Always  More to Discuss.

Now let’s talk about that opening scene in Tourist Trap. Woody and his girlfriend find themselves stranded on the side of the road…we’re either watching a horror movie or a porno…and oh look, there’s a gas station just up ahead. Woody stupidly wanders around the convenience store and finds a mostly empty room with a couple of mannequins lying around. They begin taunting him. I just want to say I’d have dipped out the moment I saw the first sign of life from a wooden dummy. I think anyone would have, but we don’t come to these types of horror movies with an expectation of well-developed, believable characters. We come to see dumb people do dumb things and die in insanely idiotic ways.

Schmoeller doesn’t disappoint. Woody tries in a futile effort to break through the door and escape from a bunch of laughing mannequins, Jack Torrance style, but ultimately fails when (presumably) someone grabs his arm and holds him in place on the other side of the doorway as Woody is pelted with household items. The scene culminates with him being impaled by a steel pole, which enters the base of his spine. Without uttering a single gasp, in total silence, Woody makes this face: 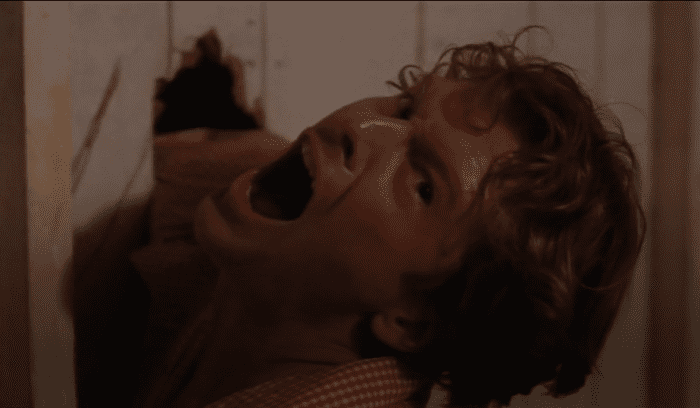 This is the exact face of silent, excruciating pain my grandmother used to make if someone stepped on her corn.

Tourist Trap along with Motel Hell and Friday the 13th represent some of the best slasher fare available during an era before slashers would ultimately go on to dominate the horror movie landscape during the 1980s. There were masterpieces released in that era, like A Nightmare on Elm Street and Sleepaway Camp, screwball clones that are still fun anyway like Blood Rage, and middle of the road slasher efforts that make up the bulk of this sub-genre with movies like Slumber Party Massacre and I, Madman.

But then there are the prototypical movies that were just a smidge ahead of their time. Am I saying Tourist Trap is ahead of its time? Yes, but not because audiences weren’t ready for such onscreen brilliance. Rather, because if it had been released a few years later it might have opened to a more receptive audience. Maybe not, but it seems likely that Tourist Trap would have fared better in 1982 than in 1979.

As much as I love the Friday the 13th franchise, I’ve never personally been scared or disturbed by a scene in twelve movies (and counting). Tourist Trap, on the other hand, boasts a scene that is genuinely terrifying and suspenseful, a feat most slasher films of the ‘80s cannot claim. They can claim camp, humor, nostalgia, and even evoking moments of disgust and special effects innovation, but few of them can actually say they induce genuine dread and fear in viewers. Tourist Trap, for all its campiness and predictability, still manages to bother horror fans in 2019 with a scene that is no less than mortifying for those not expecting it.

In a scene straight out of my nightmare list of ways I’d prefer not to die, the character of Tina (Dawn Jeffory) is strapped down to a table by a masked Chuck Connors looking suspiciously like Leatherface from Texas Chainsaw Massacre (1974). Slowly and methodically he spackles her face with plaster, which begins hardening, as he narrates the terror and excruciating pain she’s currently undergoing. As far as narrators go, this fella is less Martin Jarvis and more Keith David as possessed by an evil Wolfman Jack. Remarking that the plaster may indeed be cool to the touch, it soon will begin burning Tina’s skin as it sets. Connors sounds genuinely haunting as he declares “now your world is dark, and you will never see again.”

That line could only be scary if you knew it to be true, and the helpless woman strapped to a table knows exactly that.

Her friends watch in horror as she either suffocates or her heart explodes within her chest from fright. It’s a scene that’s both anti-climactic and overwhelming. Mr. Slausen (Chuck Connors) declares that it’s the exploding heart which will ultimately be Tina’s demise, but I’m not sure on the accuracy of such a statement. Can that even happen? Still, just the thought adds an unnerving layer of what if during a scene in need of exactly that amount of ambiguity. Good horror is ultimately a well-balanced equation; Schmoeller has worked one out. It’s not the theory of relativity or anything so profound, but it’s a good equation…probably. I’m an English person and a movie guy. I’m just guessing with these math analogies.

The big reveal is should be that Mr. Slausen and his brother are one and the same, despite assertions that they are two different people. Watching this movie for all of twenty minutes (at most), you’ll notice Mr. Slausen never enters the same shot as his crazed brother. This will cause the half-attentive viewer to guess the ending long before the revelation.

In a sense, I wonder how sequels to Tourist Trap might have been. God knows I’d have loved to see Chuck Connors back in action as Mr. Slausen and his Leatherface-ripoff alter ego.

Alas, the movie wasn’t particularly successful and spawned zero sequels. That’s probably for the best. No possibility of bastardization, just a fine horror film that is a blast to watch with your friends or even by yourself on an otherwise boring night. There’s little to analyze in terms of deeper meanings, but there are some solidly creepy moments and mannequin designs keeping the viewer feeling like they’re watching a slasher movie, not quite on the level of Halloween, but still a cut above the rest. If you’ve never seen it before but are looking for a movie reminiscent of the golden era of horror, look no further. If you’ve seen it numerous times, like me, there’s no better time than the present to watch it again. Like pie, any time is a good time for Tourist Trap.