“Tonight, Annie Miller found herself in the center of a mysterious and violent epidemic. What she encountered was no material disease but rather a plague of conscious. One that gave men permission to ignore decency, consent, and fear. And tonight, all it took was a few innocuous little rocks to turn men into monsters…here, in the Twilight Zone”.

Television historian Ken Reid is known for saying that The Twilight Zone made us better people, whether we were aware of the allegory presented or not. On the most recent episode of The Twilight Zone reboot “Not All Men”, one can take the story at face value if they look no deeper: a prolific meteor shower contaminates the water and makes all the men, and only the men, turn into psychotic, rage-filled zombies.

On its own, without further analysis, the episode is a tense yarn in which two women must evade the increasingly angry and violent mob of men causing chaos throughout the town. This is a common horror set-up that will appeal to those looking for some decent kills and some eerie scenery. But, of course, being The Twilight Zone, the fact that the meteors affect only men is a fantastic way to make social commentary on toxic masculinity and men, like myself, will observe the interactions and subtleties surrounding this horrific event, and learn something, whether we know it or not. 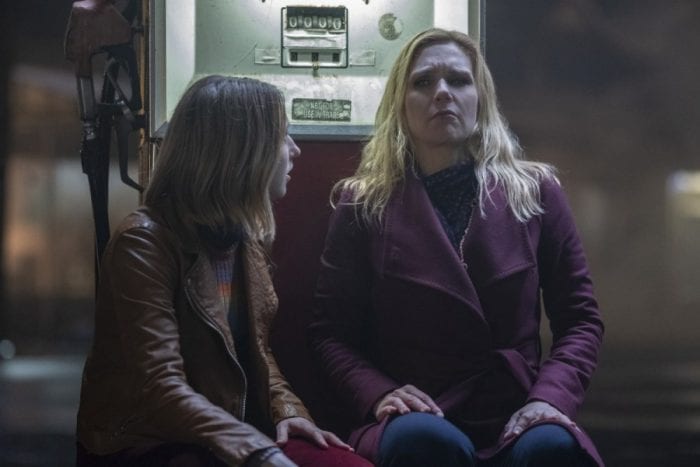 Written and directed by women, “Not At Men” is the most effective episode of the new reboot since its similar counterpart “Replay”, my favorite of the series thus far. Both episodes allowed the plot device to serve as a catalyst for discussion, as opposed to being the driving force of the story. For example, “Replay” needed no explanation or twists to explain the concept of an old camcorder being able to mess with time and transport our protagonist to the past. By just accepting it as is, we were able to get to know the characters and feel their distress on a deeper level.

Some of the episodes of this Twilight Zone reboot have focused too much on the why, allowing the gimmick to drive the story and the twist to jarringly bring the point home. What “Not All Men” and “Replay” show is that the suspension of disbelief in a show like this is more acceptable and, thus, we are able to get more meaning out of something that doesn’t need explaining.

We don’t need to know why the meteorites are only affecting men. We also don’t need to get to the source of the meteorites or find a way to cure said effects. What we can focus on, instead, is every women’s plight in this male-dominated world. It just so happens that, in the world of “Not All Men”, the problems are simply more visceral when presented by a science-fiction plot device. It only heightens men’s behavior and puts a spotlight on it, when usually it hides in the shadows or, at least, in plain sight.

The title itself is rather cheeky as many white-knight males often use the term “not all men” to explain that, yes, a lot of men are predatory, sexist, or, at the very least, take advantage of institutionalized hierarchies that empower men and subjugate women, but “not me”. That theme runs rampant in this episode as even when the affected men are covered in blood and terrifying their wives and sisters-in-law, they think “everyone else is crazy, but not me”.

I imagine this episode will cause many an insecure man to feel attacked. I’ve already seen male commenters dismiss the episode as SJW bullshit and/or a too on-the-nose social commentary. As Ken Reid said, maybe that allegory is hitting them in ways they don’t know and the fight or flight is kicking in. But it is a totally expected response, sadly. Sure, while women have never literally faced a mob of meteorite affected madmen, they certainly have suffered from, at the very least, the oppressive and entitled male gaze. What men might see as pure horror, women see as heightened reality. 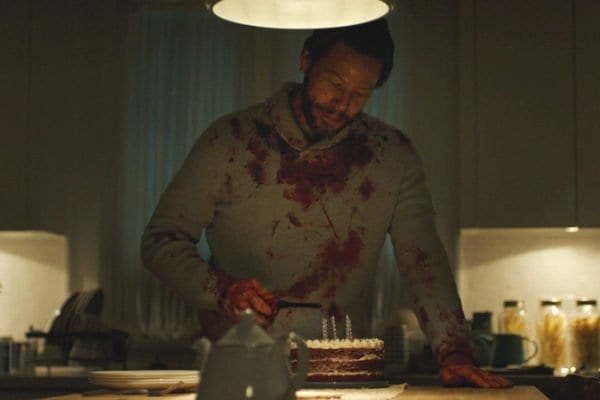 “Not All Men” was directed by relative newcomer Christina Choe, who provides the proceedings with a kinetic pace, only stopping to breathe in spurts. She takes a unique look at violence, as most of the brutality is off-screen or suggested. It is a bold visual choice as seeing the after-effects of a violent act, with the blood splatter and the manic looks of the killers, enlivens the imagination. What you think happened might be far worse than what did happen.

But even the quieter moments are filled with dread, if only because they provide character moments that feel universal with a lot of women, not just the characters speaking the lines. Written by Emmy nominee Heather Anne Campbell, who co-wrote last week’s “Six Degrees of Freedom”, “Not All Men” has two particularly uncomfortable scenes involving our main protagonist Annie (Taissa Farmiga).

The first is a date gone wrong. A co-worker named Dylan (Luke Kirby) invites the shy Annie to his house to watch the meteor shower. While Annie is attracted to Dylan, she knows he’s a co-worker and just wants to get to know him slowly. After contact with a meteorite and a brief make-out session, Annie says, “what’s the rush”. This only makes Dylan more aggressive until Annie has to vacate the premises for feeling violated. Once she departs the house, Dylan, now with the full “epidemic” running through his veins, smashes up his house in anger.

Later in the episode, Annie is parked with her sister Martha (Rhea Seehorn). They had recently been chased by another rage-fueled guy who didn’t get the attention he wanted from the women, and they had just eluded him. Annie hesitantly tells Martha that Dylan is kind of a creep, to which Martha also recollects bad dates of the past (and these without meteorite fueled nightmares). It is a powerful moment of women, almost embarrassed that something of which they were victims too, finding fellowship. The fact that they are family and never knew of each other’s pasts makes it all the more meaningful. 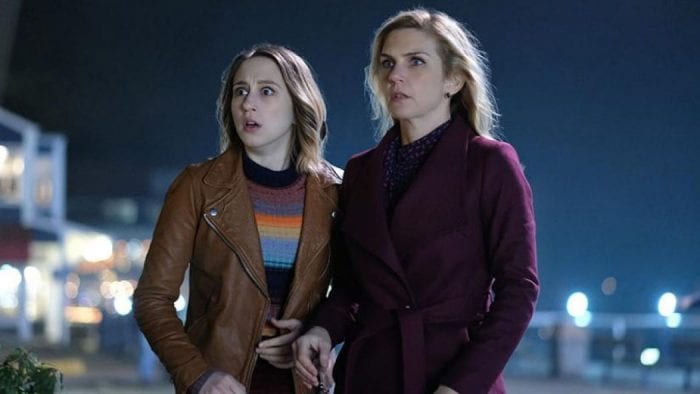 The “twist” is also a subtle one. Martha’s son Cole (Percy Hynes White) is similarly attacked, like Annie, by his boyfriend. By making contact with his boyfriend’s lips, he feels the effect of the meteorite on him and begins to rage. However, after a moment, he collects himself and the meteorite no longer has an effect. The twist, thus, is that the men could control their rage the entire time but, given permission by the meteorites, allowed themselves to let the worst of themselves come out.

The more I sit and write about this episode, the more I like it and want to rewatch it. It exists on so many levels, providing an entertaining sci-fi/horror scenario while also delivering sober social commentary. No matter how the remaining three episodes of the season pan out, Jordan Peele and his creative team can certainly be proud of “Not All Men”.