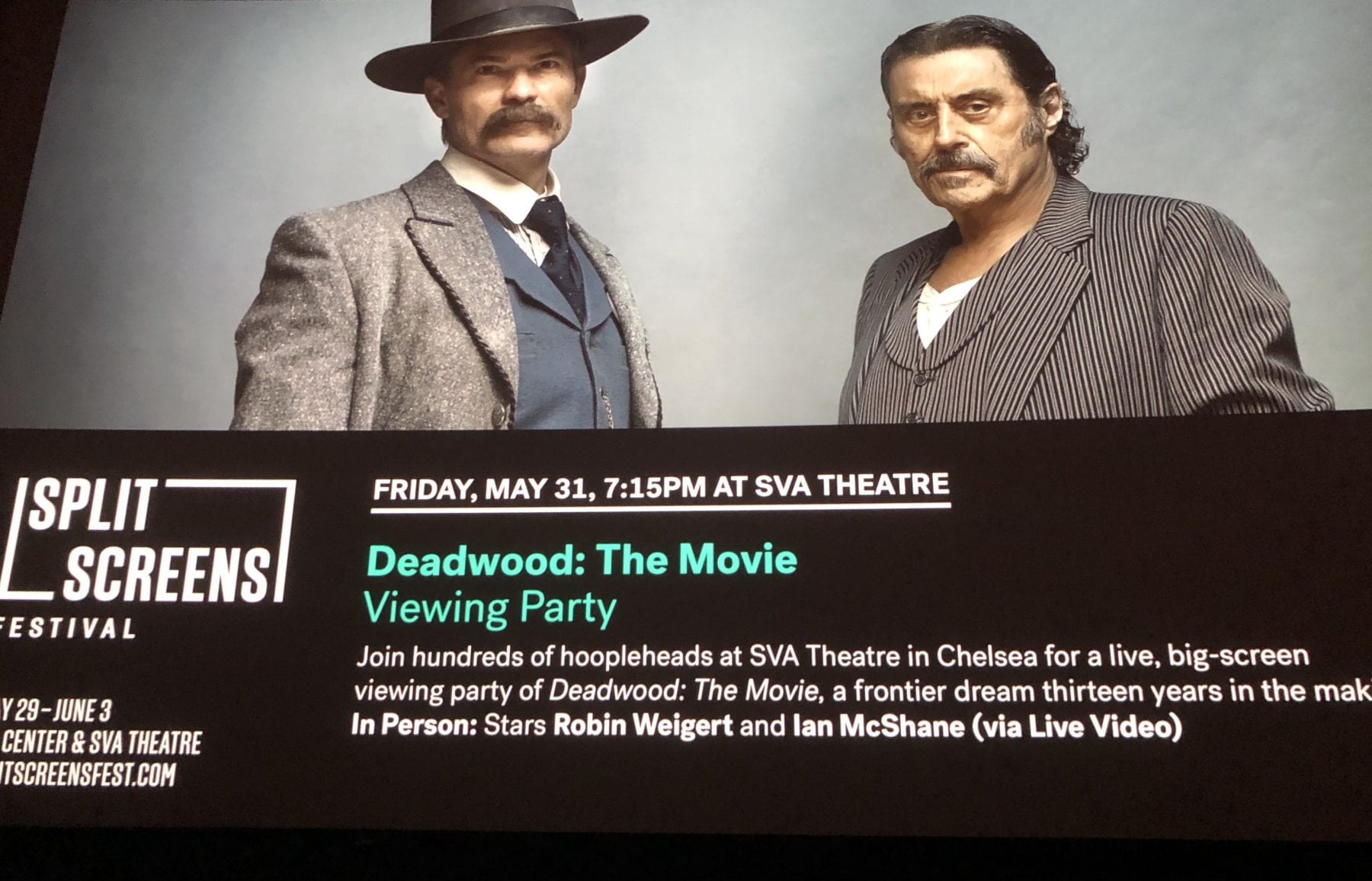 What could be better than finally getting that Deadwood movie we’ve been pining for? It’s been so long, so many of us never thought it would happen, but finally, our wish came true. And boy howdy, did they. The only thing that could have made premiere night better, at least for me, would have been to get together with a whole bunch of other die-hard fans and share the experience. And thanks to the SplitScreens Festival in NYC, that’s just what I got—and with perks.

I had never been to one of their events before, but you bet I will be going back. Not only did we get the movie itself on a big screen, we also got a talkback afterwards. Robin Weigert (“Calamity” Jane Cannery) and director Daniel Minahan were both there in person, and Al Swearengen himself, Ian McShane, joined us via Skype. The whole thing was hosted by critic Matt Zoller Seitz, himself a huge Deadwood fan. Not only did he share anecdotes about his Deadwood experiences, the movie was preceded by a documentary featurette he had made. Jim Beaver narrates what is essentially a love letter to the show.

The movie itself—my God. I shan’t go into spoilery detail here, but I laughed, I cheered, I ugly sobbed. And I wasn’t alone. At an appropriate point during the film, someone shouted out “fuck you, Hearst!” We all laughed together. One of the things Robin Weigert said during the talkback was that the main character of Deadwood is really the community. And she’s right. I and everyone else in the theater are community too.

I went to see it with a few friends, cosplayers all. I have a Joanie Stubbs costume I’m pretty proud of. My roommate makes a terrific Jane, and we had Doc and Bullock with us too. I still don’t understand why Deadwood cosplay isn’t more of a thing than it is. I guess fans of prestige shows like this aren’t in the habit of expressing their life sartorially—Game of Thrones being the biggest exception. Robin, who has seen our Jane/Joanie photos online, pointed us out during the talkback. We were then told to move to seats near to where the camera was so that Ian could see us too. Yes, folks, Ian McShane is aware of my earthly existence now. That one’s going to take a while to sink in.

A local bar was apparently hosting an informal post-show party, with Deadwood-themed cocktails and the like (we were told there might even be canned peaches). We didn’t go since I had writing to do. I was also pretty anxious to get out of my corset, but it sounded like fun. Here’s hoping that the movie is a huge success—it should be, it is so very good—and that Deadwood moves a bit out of its niche into the mainstream. Here’s hoping the future holds more events, more cosplay—and possibly even more Deadwood? I won’t push my luck. If this is the last we get, I’ll still be a very happy hooplehead.