If you haven’t heard about it yet, Insomnia is a new comedy created by/starring Vishaal Reddy and directed by Michele Cutolo. I had the pleasure of attending its premiere at House of Yes in Brooklyn on June 4, 2019, but it will begin airing on your screens/internets on Wednesdays starting June 5th.

The show centers on Nikhil (Reddy), a bisexual Indian-American writer/escort, but to put an emphasis from the get-go on his ethnicity and sexual identity almost seems to be a disservice to the show. There is an important issue of representation here, as Nikhil himself says at one point that being an escort is simply the kind of thing that Indians “don’t do” (so of course he hasn’t told his family). But that is precisely the point: of course there are people who are bi, or gay, or whatever, regardless of heritage. And, of course, there are escorts of all stripes, too.

It is probably fair to say that being queer is at this point more accepted in the U.S. than being a sex worker is, although I guess I am not entirely sure about that. There are certainly forces that work against both in not only political but cultural terms. People on the Right keep telling me we’re in a Culture War, though I’m not sure those of us on the Left tend to know we’re fighting. We’re just being what we take to be decent human beings, I think?

There is a particular kind of conservatism you’ll find in Indian-American culture, which differs a bit from the viscerally disgusting brand you get from certain politicians in the U.S., and Insomnia plays on it brilliantly. I don’t mean what comes to mind when we think of Republicans, but something broader and more nebulous: a cultural conservatism that may not seek to exert its will across the board politically, but certainly does when it comes to members of the group.

My closest experience with this was in dating a woman with an Indian father, so I hesitate to say too much in terms of trying to characterize what I’m talking about, but let’s just say that when Nikhil interacts with his aunt, for example, it feels very real. And I’m sympathetic to her, is the thing. I’m not sympathetic to someone like Mitch McConnell or Mike Pence. I’m not sure why that is, but perhaps it is because she feels genuine, whereas they feel like they are acting in bad faith. 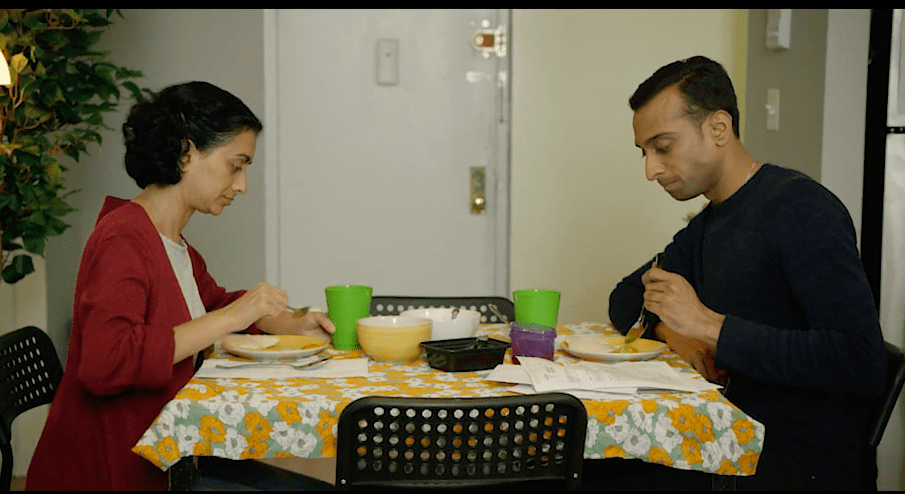 But Nikhil is an American, and the way he comes across as such is striking, too. When we meet him, at the very beginning of Episode 1, he is having sex with a man with a Star Wars fetish, complete with Stormtrooper and Darth Vader masks. And while he stays the night with him, he lets us know it is for the money. We also get a joke about licensing rights.

Insomnia engages in some fourth-wall breaking, but it works. Rather than coming across as a cheesy gimmick, these moments give us an insight into who Nikhil is as opposed to who he presents himself to be. And it would seem that is what this series is ultimately about.

Is he a writer, or an escort, or both? Is there a difference between who we pretend to be and who we are, or was someone like Jean-Paul Sartre right in suggesting that even our pretending is tied up in how we determine our existence?

Insomnia deals with a barrage of issues pertaining to questions of identity, but it does so with a humor and a style that makes it incredibly endearing. I can’t recall seeing a queer Indian-American man on television before, because I probably haven’t. Even shows that represent South Asian culture in an authentic way have been few and far between. In fact, there has been Master of None, and…I feel like I must be missing something?

We aren’t far out from the days when all Asian characters seemed to be presented as stereotypes, and only as such. And as much as I don’t really think it is warranted to get mad at The Simpsons about Apu, it is definitely a great thing to see more realistic portrayals, because really we are talking about varieties of being human—and we’re all human.

The point of literature, and TV/Film—if it has a point other than to entertain us—is to expand our horizons and give us entry into experiences of the human condition that we ourselves have not had, or perhaps cannot have. I cannot, for example, know what it is like to be a bisexual Indian-American, because I am just not one, but I can connect to Nikhil as a human being, as a writer, and as someone who struggles a bit in the world.

This is what makes Insomnia as good of a show as it is. It doesn’t just provide representation to an under-represented group; it does so in a deeply human way. Nikhil isn’t watered down in a way that makes him “more palatable.” He just is who he is, and one can relate.

And, also, the show is funny. You should check it out.

Insomnia is available to stream on YouTube and www.insomniatheshow.com beginning June 5th.