If Kevin Smith brought up Clerks: The Animated Series’ 20th anniversary on Facebook this weekend to gauge interest in a revival, consider this a hard vote in the affirmative. If his Facebook post is a teaser for something already in the works, consider me giddy.

I absolutely adored Clerks: The Animated Series. I devoured the DVDs, watched the animatics, listened to every commentary track, and watched every goofy introduction from the palatial estate Jay and Silent Bob “bought” with their mad Clerks cash. I got mad at ABC once again (yeah I’ll never get over Twin Peaks) for cancelling it after only two out-of-order episodes aired, and for only having enough confidence to hedge their bets by only producing a measly order of six episodes. I agree with Smith’s lament that they should’ve gone with UPN if they wanted a fair shake.

ABC wasn’t going to know what to do with a show where the second episode is a clips episode of the first week’s episode. They were too broad of a network, and this cartoon was not common-denominator enough. It was a bad match from the get-go. I will give ABC one thing though: they had a big enough budget to get James Woods’ to appear as “himself” to spoof his Contagion role and to get Alec Baldwin to play the main antagonist in pretty much every episode. I will never not smile at Woods’ animated visage bugging out every time he says “deadly motaba virus,” or frustrated Leonardo Leonardo telling aboriginal Canadians to “fine, try and kill it” when they’re freaking out about rain.

The show was great for way more than celebrity voices or even the unstoppable cavalcade of spoofs. Sure, the odes to Contagion, The Last Starfighter, Bad News Bears, and Freaks were fantastic, but it’s the little running jokes like the bee just outside of The Quick Stop that really tied the show together. Those thick-lined muted-colors characters had me from minute one.

Kevin Smith: yes, revive the show. I’ll subscribe or buy a ticket or whatever you need. If you need help getting Jeff Anderson on board, I’ll sign the petition. I’m ready, and I know I’m not the only one. 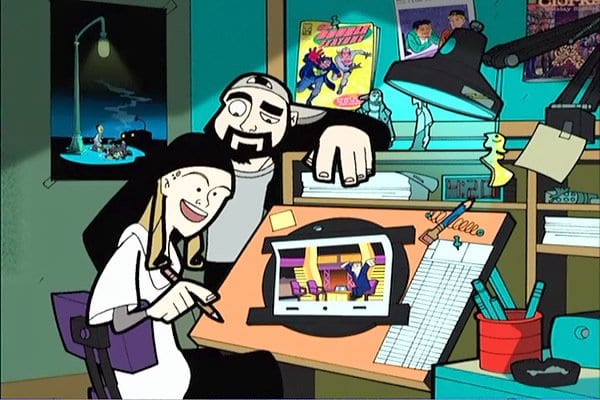