There is nothing subtle about Chernobyl‘s interest in truth and lies. The question “What is the cost of lies?” echoes throughout the show, most prominent in the very first and last scenes of the show. The preventable tragedy of Chernobyl’s breakdown is framed in this light by the show—a wider, more human problem than the physics of the breakdown of an RBMK reactor.

The first scene of the show itself serves as a thesis statement for everything that comes after. We start at the end, to put everything we’re about to see in its proper, wider context. Valery Legasov (Jared Harris) prepares to commit suicide, and while he gets himself ready, his memoirs, read as a voice-over, play over the scene. “The real danger is that if we hear enough lies, then we no longer recognize the truth at all,” he says. Rather on-the-nose perhaps, but given literally everything about our current world, maybe subtlety is best left at the door.

After all, there is nothing subtle about the real-life Chernobyl. The truth of what happened there is seen in its consequences—an “exclusion zone” stretching hundreds of kilometres around the initial explosion site at Reactor 4 of the Chernobyl power plant, outside of the small town (now abandoned, of course) of Pripyat. The truth is that hundreds of thousands of men and women assisted in the clean-up of the site, resulting in some extraordinary acts of heroism, and more than a few tragedies. Seventy percent of the radiation from the exposed reactor fell upon Belarus, which resulted in 23% of that country’s land being contaminated with dangerous, even deadly, levels of radiation.

The official death toll from Chernobyl is 31 people. The actual number, according to the World Health Organisation, is in the tens of thousands. If you’re feeling generous, you could always claim that measuring the sharp rise in cancer patients, and other long-term effects of radiation poisoning, is harder to measure than the initial acute poisoning of the firefighters and plant workers who were there on that night. The truth, of course, is more banal and terrible than that—the USSR simply didn’t want too much attention drawn to the fact that they poisoned hundreds of thousands of their citizens, and came within a hare’s breath of inflicting a nuclear holocaust on Europe. So they lied.

These are the types of lies that permeate the show—they’re not just small things without consequence; they’re huge. The show posits that, had those in charge been more willing to think ahead to the worst-case scenario, to spend that extra money to make their RBMK reactors safe, then Chernobyl, as it exists in the public consciousness, might not have happened.

Of course we can’t know that. The truth is that on April 26, 1986, during a safety test, of all things, a combination of ignorance, poor decision making, and governmental negligence led to the explosion of Reactor 4, leaving the core exposed and emitting deadly radiation at a terrifying rate. The truth is that people sacrificed their lives to stop the explosion from being so much worse than it could have been.

Craig Mazin’s Chernobyl looks specifically at the lies told and agreed upon, in service of the USSR apparatchiks not being “humiliated” by asking for help or admitting that they screwed up. It’s not even the lies themselves that prove dangerous; it’s their concerted weapon. “Disgraceful, really, to be spreading misinformation at a time like this,” Bryukhanov says to Legasov when he says that what was happening isn’t the result of a small explosion, but rather the explosion of the reactor itself. Really, Bryukhanov himself is lying—he knows that it’s partly his fault, that his arrogance and career ambition led to those under him taking stupid risks to please him, and that this is part of the chain reaction that led to the disaster in the first place.

The lies told in HBO’s Chernobyl aren’t just for evading blame, or passing the buck of responsibility to someone else. Legasov himself lies repeatedly, although he proves less than brilliant at it. He tells the conscripted miners that they’ll be safe with their suits on, but the miners see through it and decide to work in the nude. After all, it’s hot in those tunnels. He lies to his peers in Vienna, obfuscating the fact that the fail-safe button, AZ-5, would act as a detonator, rather than a total shutdown, in the circumstances brought about by the “safety test.” Even in the aforementioned conversation with Bryukhanov, Legasov lies as Fomin questions how an RBMK reactor can explode, saying “I’m not prepared to explain it at this time,” knowing full-well how dangerous the knowledge of the reactor’s fatal flaw would be, given the embarrassment it would entail for the government.

Legasov’s initial monologue on the dangers of lies illustrates the core concern of the show, saying that all we’ll have left after abandoning the truth in favour of lies is narrative, and narrative can be manipulated. Really, the danger is that words themselves lose their meaning. When the lunar rover sent to remove the poisonous graphite from the roof of the exposed reactor fails almost instantly, Legasov suggests using “biorobots”—people. But saying “biorobots” sounds far more pleasant than “we will send thousands of men to one of the most dangerous spots on the planet, knowing fully-well that most of them will be fatally poisoned by radiation exposure.” Words have meaning, right up until they’re used to cover something up, to make the truth more palatable. After that, you could use any phrase and have it mean the exact same thing.

HBO’s Chernobyl was remarkably good at showing the consequences of these lies. We follow a “biorobot” on the roof for an agonising 90 seconds in the show’s fourth episode. The dosimeter scratches on the soundtrack, his vision obscured by his anti-radiation suit, his movements are clumsy. This biorobot struggles to get even one piece of graphite onto his shovel, and removes three or four pieces from the roof at best before the bell tolls and he comes down from the roof, but not before tripping up and landing in an irradiated puddle.

It’s a terrifying sequence, and you feel the fear that this anonymous man, standing in for the thousands of real-life ones, must have felt. It illustrates how every choice made has consequences down the line. Calling men “biorobots” refutes their humanity, it makes it easier to justify putting their lives in incomprehensible danger, but it doesn’t change the fact that it was real people who did that.

In the world of Chernobyl, there are irrefutable, tangible consequences for telling lies. People suffer and die. Sometimes those lies are truly necessary—the miners dug a tunnel to prevent a nuclear meltdown that was never needed in the first place. But had it happened, Chernobyl would have been much, much worse. Those in charge of the clean-up had to act like what they were doing was absolutely necessary, they had to “count lives” as Mazin says on the accompanying podcast. If they hadn’t, the miners might not have dug their tunnel, and that would have been an unacceptable risk.

Boris Shcherbina (Stellan Skarsgård), Legasov’s real-life ally, points out the probable consequences of choosing to tell the world about the flaw of RBMK reactors—the government would react, they would bury anything Legasov chose to say, and Legasov himself (as well as his family) would be punished for daring to “humiliate” the government. Ulana Khomyuk (Emily Watson), a character created for the show (representing the dozens of real-life scientists who assisted Legasov in the real-life clean-up of Chernobyl), spoke for the consequences of choosing to lie.

She tells him that Vasily Ignatenko died of acute radiation poisoning after attending to the fire at the power plant, and that his wife, Lyudmila, spent days by his side, caring for him, and endangering both herself and their unborn child. Lyudmila’s baby died hours after childbirth, having taken the brunt of the radiation poisoning that Lyudmila contracted. “We live in a country where children have to die to save their mothers,” Ulana says. That’s what happens when you lie. Legasov chooses to lie anyway. 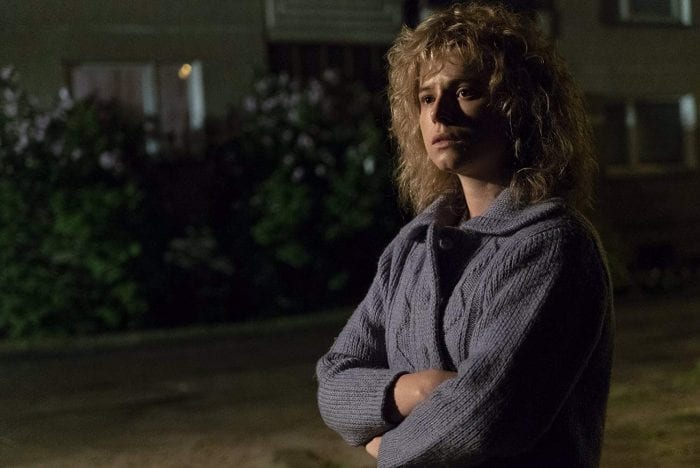 After all, while the personal consequences of telling the truth are perfectly clear, the wider ones are not. The impact of truth-telling is dependent on the courage of others to push for reform, to insist on the truth not being buried. “I went willingly to an open reactor. I’ve already given my life. Isn’t that enough?” Legasov tells Ulana, to which she replies, “No. I’m sorry, but it’s not.” Eventually, in the world of the show at least, Legasov tells the truth at the trial of Fomin, Bryukhanov and Dyatlov—the scapegoats of the disaster.

“Every lie we tell incurs a debt to the truth,” he says, and he finally answers the riddle from the start of the show: “That is how an RBMK nuclear reactor explodes. Lies.” But it’s too late. The jury won’t back him up, lacking the courage to carry his sacrifice forward, and he is ostracised from the Soviet scientific community for his actions, fading into irrelevance.

This is the true danger of widespread narrating history. Important contributions are forgotten, mundane truths fade into the background in favour of more dramatic, more thematically relevant lies. In the podcast, Mazin spoke of choosing the least dramatic option when historical sources conflicted with each other. “We have enough drama to work with,” he said. That’s certainly true.

But perhaps the end of the show itself proved too optimistic. Legasov, in a monologue that parallels the one that opened the show, says that “The truth doesn’t care about our needs or wants. It doesn’t care about our governments, our ideologies, our religions. It will lie in wait, for all time.” Implying that, eventually, the truth will come out. But that’s not true. So much of our real-life history has been lost—whether it’s to bad luck, or ignorance, or the flat-out lies of people unwilling to face the consequences of their actions.

The “cost of lies” isn’t just a nuclear disaster, it isn’t the men and women who died of radiation sickness. The cost of lies is so much more mundane than that—it’s forgetting. It’s letting it happen again. Narrative is poison in the wrong hands, it exposes how easily we are manipulated by those who prey upon our proclivity for neat stories. We live in the world that Ulana feared, that Legasov eventually stood up against—one where older generations are destroying the world for future generations because it’s easier to think that someone else will come along and make the necessary sacrifices for us. Because it’s easier to think that our lies can continue in perpetuity. The truth itself might not come out, but the consequences sure will.